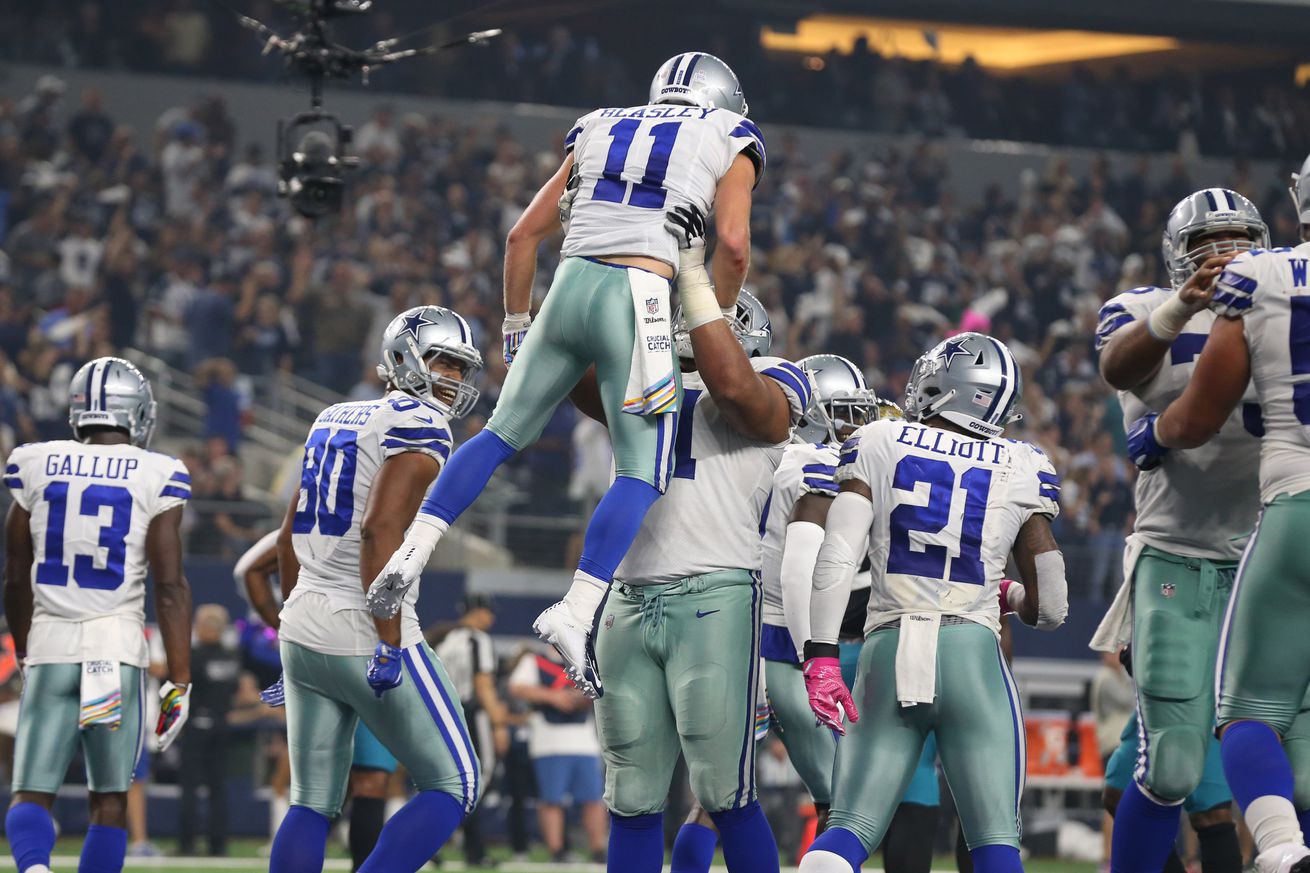 Wow, who saw that coming? Archer recaps the beat down that Dallas put on the Jaguars.

It sounded more like something a coach had to say than anything based in fact, considering the Cowboys had not scored more than two touchdowns, converted more than five third-down opportunities or shown any consistency in the first five games of the season. It sounded a lot like Jerry Jones comparing the Cowboys’ offensive potential to the high-flying Los Angeles Rams.

And then Sunday’s 40-7 victory against the Jacksonville Jaguars, who entered with the NFL’s top-ranked defense, happened.

Dak Prescott was at his best, looking like it was 2016 all over again. He threw two touchdown passes to Cole Beasley, the first time they’d connected for a score since Week 9 last season. He ran 17 yards for a touchdown. He finished with a career-high 82 rushing yards on a career-high 11 carries. He threw for 183 yards on 17-of-27 passing.

Ezekiel Elliott finished with 106 yards on 24 carries and had a 15-yard touchdown run on the first play of the fourth quarter.

5 thoughts from Cowboys’ win over Jaguars: One of the most stunning results in AT&T Stadium history – Jon Machota, SportsDay

Sunday was huge for Dak Prescott and his confidence.

2. Dak Prescott picked a great time to have one of the better games of his career. It was evident early that Prescott was going to be a significant part of the running game. He had a career-high nine carries for 53 yards and a touchdown in the first half alone. I’m convinced that for the Cowboys to win big at this stage in Prescott’s career, that will have to continue. He’s at his best right now when he’s using his legs. Prescott was also very accurate with his arm, completing 13 of his 18 first-half pass attempts, which included two touchdown passes. Maybe the most important part of the passing game was how Prescott was able to target Cole Beasley early and often.

And David Irving’s return proved to be big.

4. David Irving’s return provided a lift early on. Playing in his first game since last November, Irving recorded a QB hit on his first play from scrimmage. His snaps were limited considering he’s only practiced three times this season, but his freak size and athletic ability were on display in his limited snaps. If Irving can avoid missing anymore time because of off-the-field issues, the Cowboys will cement themselves as having one of the NFL’s best defensive lines. With pass rushers like Irving, DeMarcus Lawrence, Tyrone Crawford, Taco Charlton and Randy Gregory, opposing offensive lines won’t be able to block them all on third downs.

It is rare that you see an NFL team gain more rushing the ball than throwing it, especially when they are over 350 yards in total offense, but it worked. And again, it was against one of the top defenses in the league against the pass. It may have been, to a degree, Dallas taking what they gave them. And they gave them a lot.

Still, no matter how you look at things, this was easily the best game of the year for the Cowboys as a team, and for several players individually. Getting to 40 points is significant in the NFL, as is topping 200 yards on the ground and getting close to 400 total. Heck, when you get to put Cooper Rush and Rod Smith in to finish things up, it’s just domination. If this is what the team really is, then the season may wind up better than we thought just a week ago.

But if it is just a blip where things just aligned as they do at times in the NFL, then as enjoyable as this game was, it was just a tease. On to Washington, which now has just a half game lead over Dallas for the NFC East lead.

Dak came up big for Dallas in an important game.

Dak Prescott threw two touchdown passes to Cole Beasley to spark the previously punchless Dallas passing game and rushed for a career-high 82 yards in the Cowboys’ 40-7 victory over the Jacksonville Jaguars on Sunday.

Perhaps pumped up by some pregame mingling with UFC fighter Conor McGregor , the Cowboys rolled to a 24-0 halftime lead, with Beasley getting his first two touchdowns of the season for the NFL’s 30th-ranked passing offense that was facing the league’s No. 1 pass defense.

Prescott had 151 of his 183 yards passing in the first half because Dallas didn’t need to throw while coasting during a second-half blowout.

The 2016 NFL Offensive Rookie of the Year had already his personal best in rushing for a game when he spun out of a sack for the longest run of his career, a 28-yarder. He scored Dallas’ first touchdown on a 17-yard run.

The Dak-to-Bease connection was alive and well versus Jacksonville.

“You want creativity, you just saw it all,” ex-Cowboys quarterback Tony Romo said on CBS’ game broadcast, crediting offensive coordinator Scott Linehan. “Outstanding first two drives for the Cowboys, stealing a little bit of what the Chiefs did last week.”

The Jaguars have allowed just 17.2 points per game this season, 191 passing yards. Dallas’ two passing touchdowns in a half nearly doubled the three the Jaguars allowed the first five weeks combined.

“I’ve always liked his game,” Jaguars safety Barry Church said of Beasley this week, “and how he makes people miss in open space like that.

DAK TO COLE FOR THE TOUCHDOWN WE BACK pic.twitter.com/A0ofSIJ9ZP

DID ANYBODY HAVE TWO ORDERS OF SAUCE pic.twitter.com/ZoHuJs1PQw

Jekyll and Hyde Cowboys put together most complete game of the season in Jags blowout – Clarence Hill, The Star-Telegram

Hill writes on the unpredictability of this team.

The Jekyll and Hyde Cowboys turned into Dr. Do Good at the right time Sunday with their most complete game of the season in a 40-7 blowout victory against the Jacksonville Jaguars.

It was the most points scored by the Cowboys since a 40-10 spanking of the San Francisco 49ers a little more than a year ago on Oct. 7.

But this was a game few people expected the Cowboys to win after last week’s bone-crushing 19-16 overtime loss to the Houston Texans and the daunting task of facing the league’s No. 1 pass defense with the league’s 29th ranked passing attack.

Jaguars get put down by the Cowboys, as season reaches a tipping point – Jon Kurland, Big Cat Country

From the Jaguars perspective:

The Jaguars offense led by the consistently inconsistent Blake Bortles could never get anything generated, and for another week committed more turnovers than the defense could make up for as Bortle threw one God awful throw into triple coverage for a near pick six, and receiver Keelan Cole fumbled while attempting to turn and run on a reception in the second half. The offensive line wasn’t near the problem it was a week ago in Kansas City, but Bortles never looked comfortable and the Jaguars once again inexplicably appeared to veer away from the running game when TJ Yeldon was performing well when given the opportunity.

The biggest take away this week, however, and the most disheartening, is the play of the defense over the past two weeks. The much heralded defensive line, while hurrying Dak Prescott at times, had little to no pressure applied when the game was still on the line and it is now a more consistent trend than an aberration this season for the “Sacksonville” defense, to be anything but and a team that three weeks ago had allowed only four touchdowns all season, has allowed a combine 70 points in two weeks.

In the back end, defensive coordinator Todd Wash’s insistence on running a zone coverage scheme forcing his corners to play off, continues to allow receivers to run rough shod through the once feared secondary. With safety Barry Church and corners AJ Bouye and Tyler Patmon seeming to consistently have the most issues with making plays within the scheme.

The Cowboys may have an MMA fighter to thank for the swagger the team displayed in the blowout victory.

When the game began, it was clear that McGregor’s influence was felt on the Cowboys’ sideline. After Dak Prescott scampered into the end zone for the first touchdown of the day, he celebrated with McGregor’s “Billionaire Strut,” holding his shoulders high and swinging his arms with abandon.

The Cowboys would carry the momentum all through the first half, taking a commanding 24-0 lead into halftime. With the success Dallas had with him in attendance, don’t be surprised if McGregor finds himself on the Cowboys’ sideline again sometime this season.

Take a look for yourself:

The @dallascowboys getting a little pregame fire from @TheNotoriousMMA (via @dillondanis) pic.twitter.com/DzZExM0QKD

(In related news, are the Giants looking for a quarterback?)

Sources are saying that the New York Giants are looking into Conor as a potential heir to Eli Manning pic.twitter.com/CL4bZfXj35