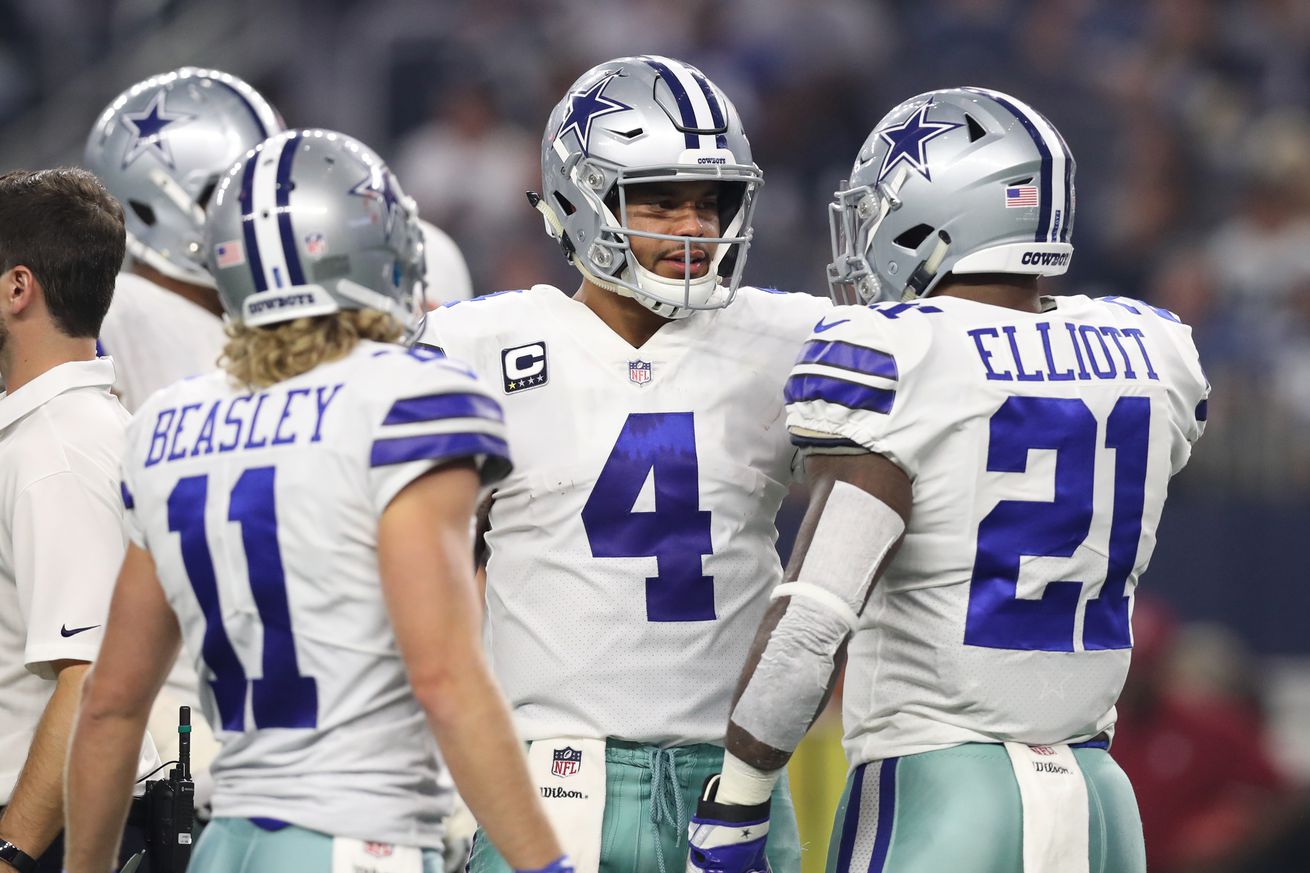 The rest of the season depends on the answer.

The offensive explosion by the Dallas Cowboys against the Jacksonville Jaguars was a welcome sight to Cowboys fans. In one game – one half, really – the team had success in almost every aspect they had struggled with. Third-down conversions. Red zone efficiency. Scoring. Quarterback confidence and decisiveness. Better offensive line play. Getting a receiver going. It all happened in just the first 30 minutes of the game, and it continued, although at a slightly less dominant level, all the way to the end. Combined with one of the best performances by what is emerging as a very good defense, and it was one of the most impressive wins by Dallas in years.

It’s great. Just a tremendous job by all involved, including the beleaguered coaching staff.

Now what happens in Washington?

That, of course, is the real question. Was this a flash in the pan, one of those days when things just aligned in favor of one team and against another? Or was this a sustainable development that can carry forward? If it was the former, then we are in for a lot more frustration and angst this season. But if that 40-7 blowout (the biggest margin of victory in the NFL for the week) is an indication of things to come, then the Cowboys may just be able to go head-to-head with any team in the NFL.

It all depends on the offense, which, after five weeks when it was either just bad or marginally good enough, looked entirely different against what was supposed to be one of the best defenses in the league – they were number one in some statistical categories. The Dallas defense has been strong most of the season to date, and now is second in points allowed per game, perhaps the most important stat. It is not surprising they held a Blake Bortles-helmed offense to only seven points. What made the difference was how the offense suddenly seemed to have it all figured out, and not just against some pushover.

All along, there has been a lot of discussion about just where the problems lay with that side of things. The coaching, particularly the play-calling and game planning of Scott Linehan, was among the suspects. Execution by the players also was blamed by many, particularly that of quarterback Dak Prescott. The receiving corps was underwhelming, With a new left guard and a backup center, the offensive line was not the dominant unit of a couple of years ago. Only Ezekiel Elliott was performing at the level we expected, and that was not always enough as teams were at times able to completely ignore the passing game and focus on stacking the box to stuff Zeke.

The multiplicity of concerns going into the Jacksonville game made the turnaround all the more surprising, but it also makes it very difficult to determine exactly what happened. Clearly the plays Linehan called were much more successful, and the Jaguars seemed befuddled at times – especially whenever Cole Beasley ran a route, because he looked to be open on almost every passing play. As has been noted earlier, Tony Romo made a point of discussing the creativity and effectiveness Linehan showed.

The emergence of Beasley, who looked suspiciously like a number one receiver (despite where he usually lines up), was also a major factor. Suddenly there was that go-to guy for the quarterback, and Beasley delivered time after time, converting third downs and scoring touchdowns. He has been regarded as the best route-runner in Dallas for years, and he did nothing to dispel that evaluation. While he was the biggest story as far as targets for Prescott, there were a few other indications that cautious optimism about the receivers group may be warranted. Geoff Swaim continues to do a workman-like job at tight end. He was the only player besides Beasley to catch more than one pass, and he had one of the blocks that sprung Prescott for the first touchdown. Michael Gallup had one very impressive catch and almost a second. With Beasley catching fire, Gallup was relegated to helping clear coverages for him the rest of the game, but he bears watching. And Rico Gathers had another reception, and the way he was plowing through defenders after the catch shows us once again how tantalizing his potential is.

Up front, the offensive line looked better, and in their case, it is a bit more of a progression that makes sense. Working in rookie Connor Williams next to Joe Looney, himself filling in for Travis Frederick, was going to take some time. There were plays where Williams’ increasing level of comfort was observable. The blocking up front is the foundation of the Cowboys’ offense, and seeing them start to play more like we have seen in the past is one of the most encouraging and logical developments.

But the real crux of just about any NFL offense is the play of the quarterback. For the most part, Dak Prescott was at his peak 2016 form in the Jaguars game. He was hitting his receivers, making good decisions, throwing and even completing some deep balls, and, to a greater extent than any previous game in the pros, he was getting things done with his legs and athleticism. Oh, and he had more than a little bit of luck on some near-turnovers. Whether or not he continues in this vein is the key. Here is how ESPN put it in their latest power rankings:

The Cowboys’ playoff hopes will largely depend on what version of Dak Prescott they get the rest of the season. In Dallas’ three wins, Prescott has thrown for five TDs and no picks, and his off-target percentage is 15 percent. In their three losses, Prescott has two TDs, four INTs and an off-target rate of 23 percent, which would be the second-worst rate of any QB this season.

So just what is the real key here? Sadly, after weeks of wrangling with just how this all fits together, we seem right back at the same place we started. It is not one thing, it is all of them and how they affect each other. Dak played much better, with help from Beasley and the line. That made Linehan’s plays work. And, lest we forget, Zeke just kept grinding until he broke through with an exclamation point of a touchdown.

We will know if this is going to be duplicated on Sunday. That is really the only way we will know, if we actually see it. It is certainly encouraging that the Cowboys did get it all to work together for one game. That is evidence that they have the potential to be a good, perhaps even dangerous team. But they have to show that consistency they have failed to produce this season. Doing it against the division leader (by just half a game) would be an excellent place to start.