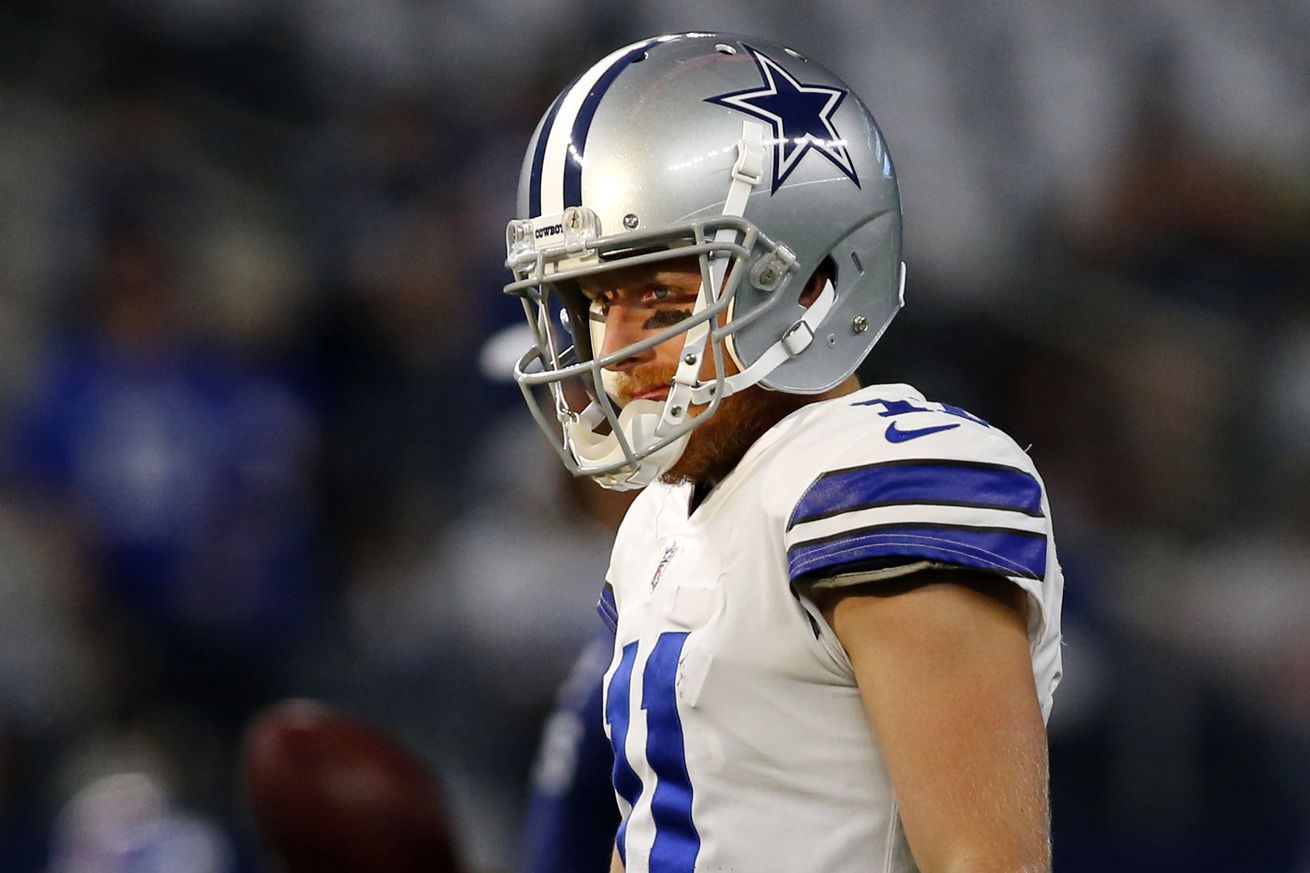 Cole Beasley destroyed the Jaguars secondary but they’ll need many more of those types of performances at receiver to become a contender.

Can Cole Beasley keep it up in tough divisional fight with Redskins? – Bryan Broaddus, DallasCowboys.com
Cole Beasley broke a nine-game streak of games without a 100-yard performance, can he continue playing at a high level versus Washington?

What is interesting about the Redskins is that they play plenty of zone coverage. Beasley thrives working against schemes which allows him space. He has a tremendous feel for how to make himself presentable to his quarterback without running into trouble. The book on Beasley in the past has been to get tight on him and try to stop him before he got started. It’s easier said than done, but I see the Redskins taking this approach.

Opponents that have limited Beasley’s ability to escape have done a better job of slowing him down. So the matchup out of the slot will be Beasley working against Moreau — but also expect to see him working against linebackers underneath and a safety over the top. They’re going to make Dak Prescott look elsewhere for his passing options.

Cole Beasley gets a lot of trash talk from opponents on the field but he’s not afraid to keep attacking – Stefan Stevenson, Fort Worth Star-Telegram
Opponents like to pick on Cole Beasley but he typically just continues to grind, except for on Sunday when he was visibly an verbally beating the Jaguars secondary.

Beasley wasn’t just talking a good game. The 101 yards receiving is his most since Nov. 8, 2015, and the second-most in a game in his career. The nine receptions and two touchdowns tied career-highs. Beasley is already close to matching his 2017 season totals (36 receptions for 314 yards and four touchdowns) as the Cowboys (3-3) prepare for Week 7 against the Washington Redskins (3-2).

Dallas Cowboys could use help at wide receiver position – Patrick Conn, WFAA.com
The Cowboys haven’t gotten much production from their wideouts and now the injury bug has bitten. Could a move to upgrade be next?

The big name available at the moment is former first round pick Amari Cooper. The word on the compensation being asked for by the Oakland Raiders is a first round pick in return for the former Alabama draftee and two-time Pro Bowl selection.

Last year saw a severe drop in performance. Cooper only caught half of the passes thrown his way with 36 less targets. The Raiders are having a tough season through six games, and with new head coach Jon Gruden looking to make his mark on the team, it appears he is willing to clean house.

Cooper is still an interesting player despite his drops. This year he is catching 68.8% of targets. Cooper could definitely help this team but is he worth the asking price of a first round pick?

At what price would an Amari Cooper trade be worthwhile for the Cowboys? – Staff, SportsDay
What should the Cowboys spend in order to add Amari Cooper at the trade deadline? How much is the receiver worth?

Jon Machota: The Raiders are reportedly looking for a first-round pick in exchange for Cooper. That’s too rich for me. A second? Now I’m interested. The two-time Pro Bowler is only 24. I can’t understand why he hasn’t had more success with Derek Carr. Consistency is Cooper’s biggest issue. He’ll have 130 yards and a touchdown one game and then 10 yards the next. Cooper had back-to-back 1,000-yard seasons to start his career. He had seven touchdowns last year. The Cowboys need to address the receiver position this offseason and I highly doubt they’ll acquire a player as talented as Cooper. But again, I wouldn’t part with a first-round pick.

“We addressed the elephant in the room as an offense,” quarterback Dak Prescott said. “I think it was great. It was a great meeting. We had the whole offense in there and just talking amongst the coaches and players about the thing maybe we need to do better on the road, just communication. I know we’ll take a lot from that conversation and our communication will be better. We had a great day of practice and yesterday and just got to carry it over to Sunday.”

Cowboys offensive stats on the road versus home are appalling – Michael Sisemore-Blogging The Boys
Ezekiel Elliott says that the offense has had trouble communicating on the road and it shows up in the evidence.

Let’s talk about third downs for this offense because that’s been the biggest contributor to drives stalling without points. Before they took their foot off the gas against the Jaguars, the Cowboys had converted six of nine third downs this past week. They went one of eight in the second-half but that was mainly because they were ahead and killing clock, they still scored 16 more points.

In their last two home games, the Cowboys were over 40% on third down, that puts them just in the top-half of the league. They haven’t even reached 30% in third downs away from home and it’s killing them.

Cowboys have struggled on the road but D.C. can be kind to the team from Dallas – David Helman, Dallas Cowboys
Amid all the talk about road struggles this week for the Cowboys, the nation’s capital can be friendly for the Cowboys.

The Cowboys have been bad on the road, to be sure. They’re 0-3, they’re averaging 12.3 points in those games and they’ve managed just three total touchdowns away from AT&T Stadium.

This isn’t your average road trip, though. As far as I’m concerned, this is home away from home. It might not always have been this way, but the Cowboys have owned FedEx Field in the five years I’ve covered them.

Way back in 2012, the Cowboys lost a gut-wrenching playoff elimination game to Robert Griffin III and Alfred Morris. Since then, Dallas has been 5-0 when they’ve gone up to Landover, Maryland.

Redskins’ Defense ready for Elliott-Led Cowboys Running Game – Stephen Wyno, NBC 5 Dallas-Fort Worth
Even after Dak Prescott rushed for 82 yards last week, the Washington Redskins know it’s still all about bottling up Ezekiel Elliott. Will that be an area to exploit?

“We don’t really care about him running,” linebacker Zach Brown said. “Him running is not really our concern.”

Their concern is Ezekiel Elliott, the Cowboys’ top running back who’s coming off 106 yards and a score against Jacksonville. After seeing Cam Newton with Carolina, the Redskins are prepared for Prescott, but after ranking last in the league in run defense last season — including allowing 351 yards in two games against Dallas — the Redskins know it all starts with containing Elliott.

“Definitely with their O-line, their running game is something that definitely jumps off on film,” linebacker Mason Foster said. “You don’t want to start thinking about Cam Newton or thinking about Dak Prescott so much that you’re letting Zeke and (Panthers running back Christian) McCaffrey run free because those are the guys who really can hurt you.”

Cowboys’ Byron Jones ‘scratching the surface’ at how good he can be – Todd Archer, ESPN
How right was Kris Richard about Byron Jones? Jones is turning into one of the NFL’s best cornerbacks.

But the biggest reason for the move was the hiring of passing-game coordinator Kris Richard, who was the Seattle Seahawks’ defensive coordinator. He loves big cornerbacks (such as Richard Sherman). At 6-foot-1 and 200 pounds, Jones has the size Richard wants.

“Perfect fit,” Marinelli said. “His body is perfect for that technique.”

Jones is using what he learned as a safety at cornerback. Because of the nature of the position, Jones had to take a bigger-picture view of the opposing offense. At corner, he needs to know only what his guy will do.

It lets him to cut back on the receiver’s route inventory, allowing him to play faster.

“You’re right in front of someone every play, especially the way we play,” Jones said. “Yeah, we may bail some of the time, but for the most part I’m man-to-man pretty much and competing against another really good receiver. I love that.”

For a few weeks now word has been out that Dallas Cowboys wide receiver Terrance Williams could be suspended by the NFL for an incident related to his arrest over the offseason. That finally happened and Williams is officially suspended for the next three weeks, although it’s reportedly tied to PEDs.