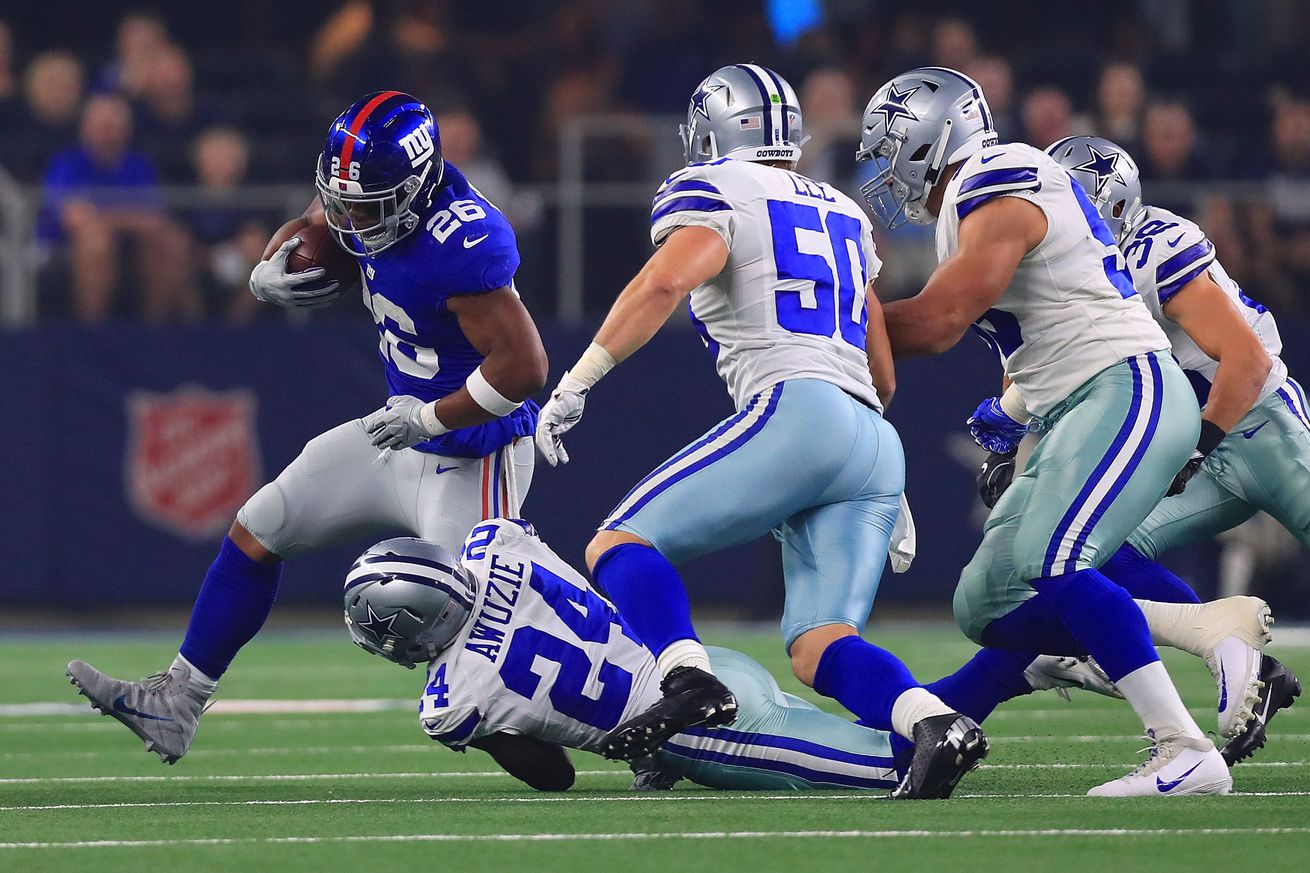 Cowboys defense gets boost with return of linebacker Sean Lee – Todd Archer, ESPN
After sitting out the past three weeks, it sounds as if Sean Lee will be in uniform this weekend as the Cowboys head to Washington to take on their division rival.

A Dallas Cowboys defense that is ranked fourth in yards per game and second in points per game will welcome back its leader, weakside linebacker Sean Lee, on Sunday against the Washington Redskins.

Lee missed the past three games with a hamstring strain suffered Sept. 23 against the Seattle Seahawks, but went through two full practices this week and is not on the injury report.

”If you’re ready, if you’re 100 percent, you play,” Lee said. “I’ve missed a lot of time already so I’m trying not to miss much more, trying to play as many games as I can. … I need to get out there and get snaps, continue to improve and hopefully help this defense.”

Crowder out vs. Cowboys, Richardson doubtful – Matthew Paras, The Washington Times
While the Cowboys got some good news regarding the status of one of their best players, the Redskins did not. It looks like they’ll be without two of their most explosive weapons on offense.

Washington wide receiver Jamison Crowder will miss his second straight game Sunday when the Redskins take on the Dallas Cowboys, while wideout Paul Richardson is doubtful with a shoulder and knee injury.

Crowder, who has missed the past two weeks of practice with an ankle injury, was seen outside the locker room Thursday rolling in a medical scooter with a boot around his right foot.

“Some guys will recover quicker than others,” Gruden said. “But for a slot, for him to change direction with confidence, we’ll have to wait and see. He’s going to be very diligent in his rehab. I would expect him to be back sooner than later, but it could still be a little time,” he said.

Hard to believe, but Washington is one of only 2 opponents remaining on the Cowboys schedule at the moment w/ a winning record. The other: New Orleans.

The future looks bright for the Dallas Cowboys’ defense – Michael Renner, Pro Football Focus
Renner explains why the Cowboys defense is one of the more underrated units in the entire NFL.

I know this is very difficult to believe, and I can’t believe I’m saying it myself, but the Cowboys defense is actually underrated at the moment. After years of the general public being sold on second-tier starters as perennial Pro-Bowlers, Dallas now has a handful of blue-chippers at every level of the defense, who have yet to even sniff the Pro-Bowl. That’ll be changing soon if these guys keep playing as they have.

As Cowboys’ young linebackers keep developing, how could Sean Lee’s role change? – Matt Mosley, SportsDay
As Sean Lee starts to work his way back from injury, does that mean that he’ll automatically work his way back onto the field? We’ll find out more on Sunday.

I definitely think he can be managed differently now that Jaylon Smith and Vander Esch have emerged. It will be hard to hold him back, though. The Cowboys may need to be creative and find ways to use all of them. But you don’t want to mess with the development we’re seeing from those other two LBs right now. It’s nice to not have to rush Sean Lee back from injury. This is pretty much what the Cowboys had in mind when they took Vander Esch in the first round.

Cowboys VP Stephen Jones on @BenandSkin: “The scary part is, Britt Brown still thinks [Jaylon Smith] may have a little room left to get even a little better in terms of totally recovering from his injury. …I can’t imagine how good he can be if he gets even a little bit better.”

Final Thoughts: What Will Sean Lee’s Role Be? – Bryan Broaddus, DallasCowboys.com
Broaddus says there is a plan in place for how to use Sean Lee this week against the Redskins.

I believe we’ll see Sean Lee back on the field this week in his starting role next to Jaylon Smith. From what I have been told, Lee had an exceptional week with no setbacks and is ready to go. According to Jason Garrett, Lee is receptive to the idea of being a part of a rotation that includes himself, Smith, Leighton Vander Esch and Damien Wilson. Having a fresher Lee during these games, especially in the later stages, will pay dividends to closing out games.

Despite all the criticisms that have been tossed in the direction of quarterback Dak Prescott, Cowboys owner Jerry Jones said, “Anything we need to see and need to know, I see with him” and called Prescott the “long-term” option for Dallas in an interview with Jarrett Bell of USA Today.

“We know the problem with saying that about any player, but I don’t mind saying it,” Jones told USA Today. “I said it about [Troy] Aikman. I said it about Tony [Romo]. When you get one of those top ones, you can basically be that definitive.”

Dak Open To Running More If It Means Wins – David Helman, DallasCowboys.com
This seems like a no brainer..

If ever there was a theme for this weekend’s trip to Washington, it might be that. After all, the biggest wrinkle in the Cowboys’ 40-point breakout last week against Jacksonville wasn’t Dak Prescott’s contributions as a passer, but his 82 rushing yards – complete with a touchdown.

For an offense that’s still trying to find its way without Jason Witten and Dez Bryant, Prescott said it’s something he might need to do more often to maintain that momentum.

“It’s an element that we probably need to explore more – just in the simple fact of, in the past years we had different things that were necessarily go-to’s that aren’t go-to’s now,” Prescott said. “So maybe using the run game, using my feet can serve that benefit to us.”

Jerry Jones’ answer shows why Cowboys are unlikely to trade for Amari Cooper – Jon Machota, SportsDay
The Cowboys name has popped up in rumors surrounding Raiders WR Amari Cooper. Jerry Jones all but shut down those rumors on Friday.

”If you had an opportunity and it makes sense, that’s hard to do at this juncture, to bring in a position that needs the coordination that you have to have with the quarterback,” Jones said on 105.3 The Fan’s G-Bag Nation show [KRLD-FM]. “The farther you go into the year, then the harder it is to think about bringing a player in.”

The position creates a challenge because the new receiver would have to build a rapport with quarterback Dak Prescott. Jones noted that other positions, like running back, would be easier to immediately fit in with a new team.

Jones said the Cowboys are “confident in the personnel that we have here.”

Tavon Austin skipping surgery, may return in 2018 – Jess Haynie, InsideTheStar
Austin received a second opinion on his injured groin on Thursday, for now it seems like he’ll hold off on surgery in hopes to be able to return at some point in 2018.

A groin injury sustained last week against Jacksonville won’t send Tavon Austin to injured reserve, at least for now. The Dallas Cowboys receiver has elected to forego surgery at this time, giving him a chance to return to action in 2018.

There was concern that Austin could land on IR initially following the Jaguars game, but he sought a second opinion this week. It appears that this new information was enough for Tavon and the Cowboys to decide that surgery can wait.

Stephen Jones said Chidobe Awuzie could play if needed, but thinks Cowboys are better off with a 100 percent Jourdan Lewis than a 95 percent Chido. Awuzie hasn’t been ruled out, but the team is also factoring in next week being their bye week, giving Chido more time to recover https://t.co/wAvpaTNiEu

Brett Maher currently best kicker in NFL – Reid Hanson, Fansided
Well would you looky there. That’s not a headline many thought they’d be seeing this time two months ago.

After missing his first attempt of the season, Maher has become arguably the best kicker in the NFL, stringing together a league-best 15 consecutive field goals. Of those with 12 or more attempts, Maher is leading the pack, tied with the Jets Jason Myers with a 94 percent success rate.

These haven’t been chip-ins either. No one has more 50+ makes than Maher, who is a perfect three-for-three. With his power a clear asset, Maher can seemingly deliver touchbacks at will. He has been showing good hang time on some goal line kicks – intended to tempt returners into returning them all while giving coverage team enough time to close in.

Re-Grading Every NFL Team’s 2018 Offseason Moves – Maurice Moton, Bleacher Report
Let’s take a look how the Cowboys offseason gets graded out after having time to view the players they added.

The Cowboys passing offense ranks 29th, and quarterback Dak Prescott has seven touchdown passes. While there’s some onus on the signal-caller to optimize the talent around him, it’s clear the components in the aerial attack still need time to jell as the season progresses.

NFL Teams Poised for a Surge in 2nd Half of 2018 Season – Brent Sobleski, Bleacher Report
Are the Cowboys in for a second half surge? Sobleski thinks they could really take off here soon.

The 3-3 Dallas Cowboys are figuring out some things.

Sunday’s 40-7 beatdown of the Jacksonville Jaguars is the type of performance Dallas can build on—especially in light of the individual efforts.

Head coach Jason Garrett finally remembered what made Dak Prescott so successful during his 2016 rookie campaign and allowed the quarterback to use his athleticism to open up the offense. Prescott ran for 82 yards and a score.

He also discovered a No. 1 target. Cole Beasley caught nine passes for 101 yards and a pair of touchdowns.

”You saw [Jason] Witten stuff. You saw No. 1-ish. We talk about what is [a No. 1 receiver], well, of course, but we saw an emphasis on what he does, his level,” owner Jerry Jones said of Beasley’s performance, per ESPN.com’s Todd Archer. “There’s no question we all know his skill is separation, and he was able to do that.”