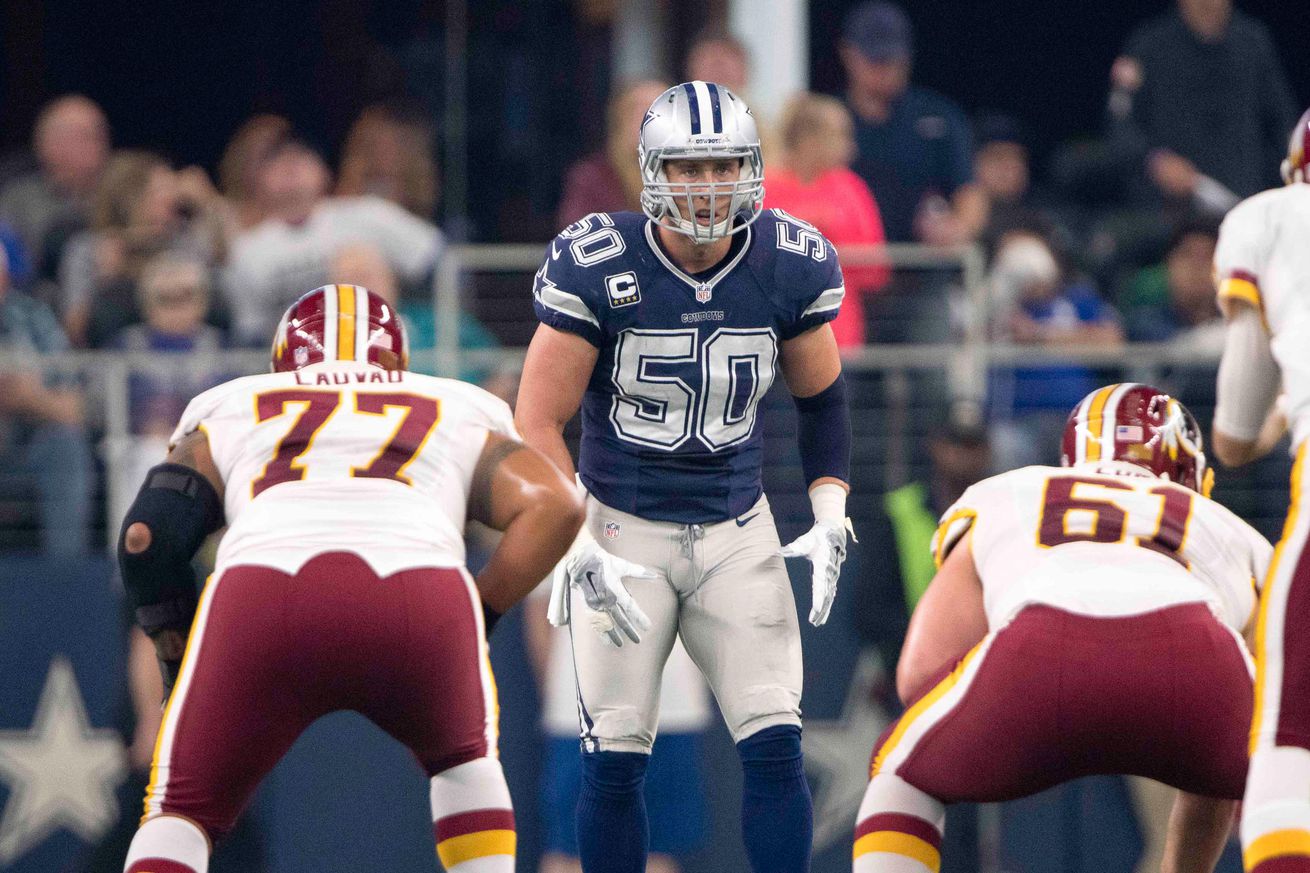 Here is your game day dose of Cowboys news!

The Redskins are favored by 1.5 this week as the Cowboys have yet to show they can win on the road. Could things change this week?

Just because the Redskins have been playing stout defense doesn’t mean they’ll cover on Sunday. The Cowboys have won two of their last three and dominated most of the way in their overtime loss to the Texans two weeks ago. Dallas has been rock-solid on the defensive side all season and heads into Sunday ranked No. 4 in overall defense (315.2 ypg) and second in scoring defense (17.2). Its inconsistent offense finally found some footing last week, going for 378 total yards in a balanced attack against the Jaguars. Dak Prescott threw for 183 yards and two touchdowns, while Ezekiel Elliott rushed for 106 yards and a score.

Sean Lee is back to 100%, but don’t expect him to be thrown to the wolves.

The Cowboys’ veteran linebacker and defensive captain went through his third straight practice Friday and feels “ready to go” after missing the last three games with a hamstring injury. “We’ve passed every test,” he said. “I’ve had no problem with it during the whole entire rehab. I’ve practiced all week and felt good on it. I feel like I’m ready to go.” Lee’s status for Sunday’s game is not in question, according to the official practice report, after participating fully in practice for the second straight day.

But Lee will rejoin a squad that is a little different than what it’s been in the past.

How will that affect the rotation? Lee weighs in with his thoughts.

“I think there are snaps for everybody. I think we’ll all be out there trying to make plays at some point. It’s good to have a lot of guys who can be out there and make plays. It’ll help me get rest. It’ll help everybody be fresh all the time. Having a crew like this is something I’ve dreamt of.”

While the Cowboys get one of their defensive starters back, they could be without another one as cornerback Chidobe Awuzie is dealing with an ankle injury.

Awuzie (ankle) is questionable for Sunday’s game against the Redskins, Kareem Copeland of The Washington Post reports. Awuzie was a limited participant in practice throughout the week, so the 23-year-old seems truly questionable for Week 7. Expect Awuzie to retake his usual starting role if healthy, and Jourdan Lewis would see an increased workload if Awuzie were to miss any time.

Here is the final practice report for each team:

Cowboys look to be in pretty good shape for Sunday’s game at Washington pic.twitter.com/dwTinaKyo6

Is the game on in your area? 506 Sports has the TV schedule map to answer that question for you. It’s another Romo-broadcast for Cowboys fans.

Pro Football Focus provides their weekly preview for this week’s matchup, including how the Redskins have an advantage on third down.

Defense struggling on third down

The Cowboys pass defense has been good to this point, but they’ve struggled on third downs. When passing on third down, opposing quarterbacks have a passer rating of 106.7 against them. That’s currently the fourth-highest mark in the league.

And it doesn’t get any better when the Cowboys have the ball.

When opponents pass on third down against the Redskins, chances are they won’t be doing it from a clean pocket. Through six weeks, the Redskins have produced pressure on 53.2% of their third down pass-rushes, which is currently the second-highest rate in the league.

How well the Redskins contain the Cowboys star running back will go a long way in determining who wins this game.

Amid plenty of inconsistency, Washington has not allowed an opponent to rush for more than 104 yards in a game so far this year. Newton was the Panthers’ leading rusher when they had just 81 yards on the ground.

“One of our things is trying to make a team one-dimensional because we know if you put it in the air, you eventually might make a mistake,” Brown said. “The run is just something we’ve got to make sure we stop. If a team can run the ball on you, they can kind of control the game. So we’ve got to make sure they’re not running that ball on us.”

Based on what we’ve seen so far this season, the Redskins have the firepower to pull it off.

Ezekiel Elliott has found success early and often against the Redskins during his career. In three games, he’s carried the ball 74 times for 350 yards (4.7 yards per carry) and five touchdowns. Washington has seen more improvement against the run than any other team in the NFL. In 2017, the Redskins were dead last (134.1 yards per game). This season, they’re currently ranked No. 6, giving up only 90.2 yards per game. That improvement has a lot to do with the additions of Jonathan Allen and Da’Ron Payne. Outside of edge rusher Pernell McPhee, the two former Alabama standouts have the highest run-stopping grade on the team, according to Pro Football Focus.

The Cowboys first-round pick Leighton Vander Esch is making his presence felt already, but the Redskins are pretty happy with their first-rounder as well.

It’s been said countless times, and the week is still young. Daron Payne was drafted for games like this. Until Dak Prescott strings together two games in which he’s the main factor, the Cowboys’ offense runs through 2016 top five pick Ezekiel Elliott. The offensive line may have Joe Looney and Connor Williams in place of previous starters, but the group has performed well this season. A big deal was made out of the Cowboys’ loss of Travis Frederick, but Sunday’s matchup will not be a guarantee for either team. The Redskins’ front, while talented, is ranked sixth in the league in run defense, while the Cowboys’ line has helped bring along a top five rushing attack. What happens when an unstoppable force meets an immovable object? Put on your physics goggles, because we’ll find out later this weekend.

Zeke’s only had one crack at the Redskins last season, but it turned out to be his highest rushing output of the year.

In Elliott’s only meeting vs. Washington last year, he rushed for a season-high 150 yards and two touchdowns in a 33-19 victory at FedEx Field. While he broke off a few double-digit gains, he was most effective when he parlayed two- and three-yard runs into six- and seven-yard gains thanks his elite ability to keep plowing forward after first contact. And he might even better at shedding would-be tacklers this season. Profootballfocus.com credits him with 357 yards after contact on 586 yards gained. Only Gurley has more.

Elliott leads the NFL in runs of 15 yards or more.

While Zeke does a lot of work himself, his offensive line still helps him get good head start compared to the rest of the teams in the league.

Zeke is not the only running back that will be cause for concern for defenses in this game.

Adrian Peterson didn’t sign with the Redskins until mid-August, but he’s leading the team in rushing. An injury that last week sidelined running back Chris Thompson meant that Peterson has carried a heavier load for the offense. Peterson himself is battling a sore shoulder, sore ankle, and sore knee but played well in Sunday’s win over the Panthers. Ask any Cowboys player or coach and they’ll tell you that Peterson is still an elite player who runs with power. It’s going to be really weird to see Peterson, a native Texan from Palestine, wearing Redskins’ burgundy and gold. We’re used to seeing him in purple as a Minnesota Viking. But it’s going to be tough sledding for Peterson this weekend. The Cowboys run defense is ranked 7th best in the NFL and allows an average of only 90.7 rushing yards per game. Even more impressive, the Cowboys are allowing only 3.5 yards per rush. Peterson is averaging 4.4 yards per carry this season. He has 77 carries for 339 yards and 3 rushing touchdowns through 5 games.

After yesterday’s 97-yard performance, Adrian Peterson is now 124 yards short of passing Tony Dorsett for 9th on the NFL’s all-time list. Would be an extra treat for #Redskins fans for AP to do against Dallas Sunday.

The linebacker trio of Sean Lee, Jaylon Smith, and Leighton Vander Esch might have a say in that one.

Dak Prescott showed up big last week, but Alex Smith has yet to have his breakout game in a Redskins uniform.

The biggest storyline in this edition of the series has to do with Smith. If this game calls for it, can he lead the ‘Skins to a victory?

That could be difficult vs. the Cowboys. The QB will be without Jamison Crowder again, and on Friday, Jay Gruden listed Paul Richardson as doubtful. Chris Thompson, meanwhile, is questionable.

So, it’s likely Smith will be without two of his most talented weapons and possible that he’ll be missing three. And on top of that, he’ll be operating behind an offensive line that’s had issues, which is contributing to his sometimes shaky feet in the pocket. To make things even harder, the Dallas defense allows the second-fewest points-per-game in the league and boasts a defensive line that Gruden is very worried about because it employs a scheme that involves a lot of movement. The Colts D-line uses a lot of stunts and movement, too, and they held the ‘Skins to just 9 points in Week 2.

Smith has yet to top 300 yards this season or throw for more than two touchdowns in a single outing. He’s had no problem winning when the team jumps to an early lead and the running game is going, sure, but he can’t count on that each time he starts. At some point, his right arm is going to have to be mainly responsible for a Redskins W.

And there’d be no better time for that to happen than in his first shot against his new franchise’s most-hated opponent.

The Redskins base camp offers up three storylines to keep an eye on, including another Cowboys player who can pad those rushing stats.

Dallas is coming off their biggest win of the year, and quarterback Dak Prescott had a lot to do with it. Prescott was having a middling season before last week’s win over the Jaguars in which he showed some of the ability that helped crown him as the 2016 rookie of the year. Against Jacksonville, Prescott threw for two touchdowns, ran for another and didn’t turn the ball over. In addition, he compiled a career-high 82 yards rushing on 11 attempts through a combination of designed runs and improvised scrambles. Prescott does a good job of keeping his eyes downfield while scrambling, making him especially dangerous when he gets outside of the pocket, which makes him tough to defend.

The writing staff over at the Mothership is in full agreement – the Cowboys get their first road win of the season on Sunday.

David Helman: I’m not interested in overthinking this. The Cowboys are a flawed team – but so is Washington. The Cowboys haven’t won on the road this year – but they don’t lose at FedEx Field. They’re 5-0 at FedEx Field over the past five years, and they’re 14-7 all-time since the building opened in 1997. Washington has a stout defensive front, but I trust the offensive line to make some room for Elliott. It’s not going to be pretty, but I think he and Prescott can combine to get this team up near 150 total rushing yards. With the run game clicking, I’m thinking maybe Geoff Swaim has his best day as a pro, taking advantage of Washington’s efforts to take Cole Beasley out of the game plan. Swaim finishes with 65 yards and a touchdown from Dak, and the Dallas defense harasses Alex Smith into a timely interception. Cowboys head into the bye week with a win – something like 24-20.