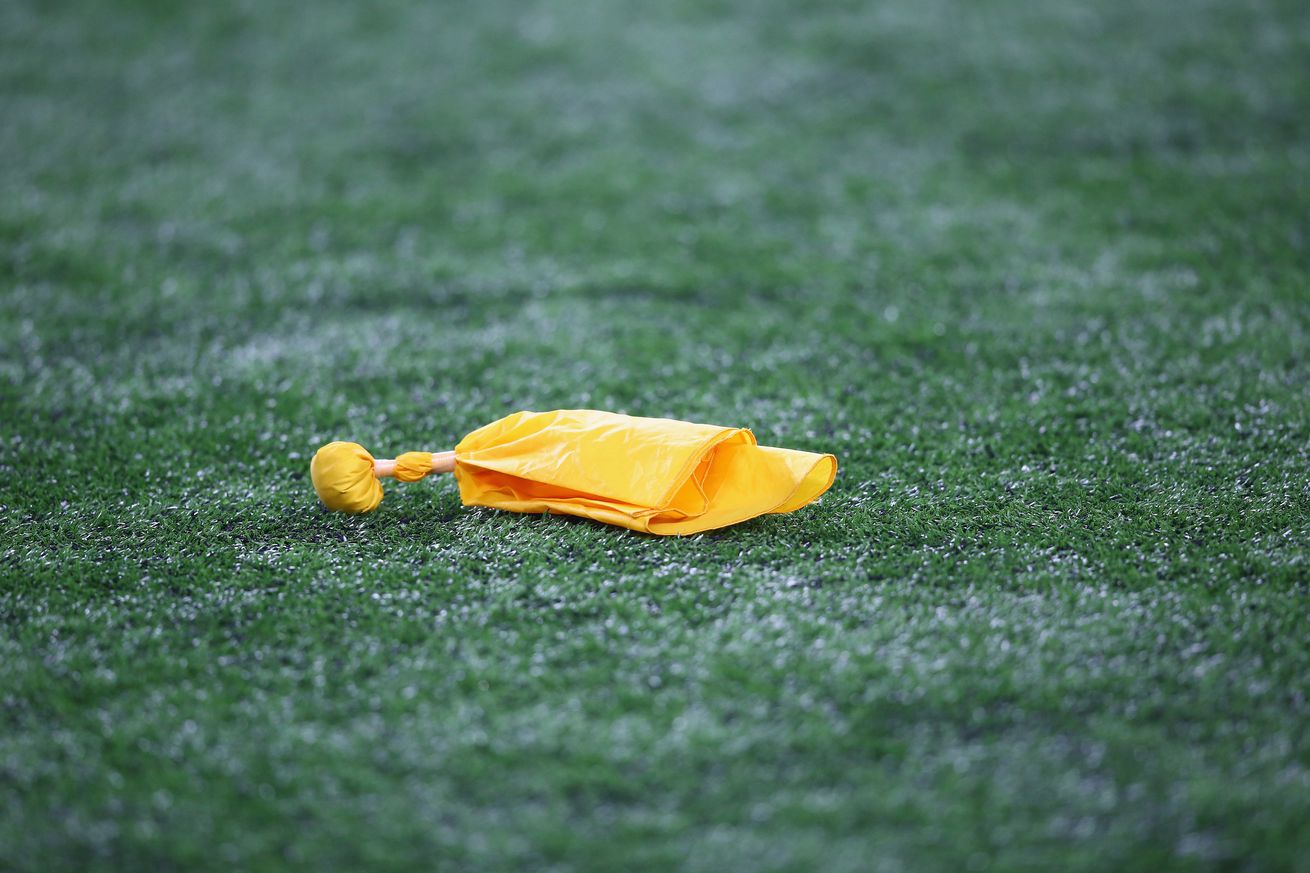 Even at the risk of bringing on an “avalanche of illogic” (per Mike Fisher) when saying anything slightly positive about the Cowboy, I’m going to start this post with some good news.

It wasn’t so long ago that the Cowboys regularly ranked among the most penalized teams in the league, so that’s definitely something to feel good about. Unfortunately, that’s it in terms of good news for today. So now for the bad news.

16 of those 20 penalties resulted in a stalled drive, meaning no points were scored on the drive and no first down was achieved after the penalty incurred. So when you see an offensive penalty and automatically believe that drive is dead, that’s because four out of five times it actually is.

And that stalled drive percentage of 80% ranks the Cowboys dead last in a league where the average is 56% and the best teams have a rate below 40%.

Some will be quick to point out that this is all on the coaching, which would be true if it weren’t for the players committing the penalties. Others will reflexively blame Jerry Jones for this, which would be at least partly true if we were talking about the 1964 University of Arkansas National Championship team for which he played on the offensive line and was a co-captain.

And so it is that almost every time the discussion turns to problems the Cowboys have, some intellectual high-flyer will inevitably propose a simple solution to the problem like “Fire Jason Garrett,” which is inevitably followed by “!!!,” because everybody knows that extra exclamation marks automatically validate the preceding message; the exclamation mark has become the selfie of grammar.

But like in every other avenue of life, while simple answers are attractive precisely because they are less intellectually demanding, they also almost never work.

So let’s study the data a bit further to find out what’s ailing the Cowboys offense, and we’ll start by breaking down the calls that have gone against the Cowboys this year, by player, not including penalties that were declined or offset:

The penalties here didn’t just go against some scrubs, they include some of the faces of the franchise: two former number one picks in Smith and Elliott, the quarterback (I put Prescott in here for the three delay-of-game penalties, but the NFL considers these a team penalty and doesn’t assign them to an individual player), a second-round pick in Williams, and in Collins a guy who was almost a first-round pick.

Should Garrett bench Prescott for a couple of snaps after every delay-of-game penalty? Tell Tyron Smith to sit in a corner for a drive and reflect on what a bad boy he’s been for that holding penalty? Take away La’el Collins’ helmet after every penalty and tell him to “think about what you’ve done.” How about cutting Ezekiel Elliott to set an example; after all, Jimmy Johnson would have done that, no?

The O-line is responsible for 12 of the 20 penalties and 9 of the 16 stalled drives, and while that may be part of the reason why Paul Alexander was fired, that’s not enough to blame the O-line alone for the stalled drives. Or any other player for that matter.

Another data point worth looking at is when the penalties happened, on the hypothesis that a penalty on third down will be a lot harder to overcome than a penalty on first down. Here’s the split for the penalties on the 16 stalled drives:

On to our next and final data point, in which we look at what the Cowboys did on the play immediately following the penalty. On 14 of the 16 plays, the Cowboys offense had 10 or more yards to go. Here are the details:

Two things stand out to me here:

I understand the theoretical need to get the run/pass balance right, but when you know your offense has issues when it’s behind the sticks, why call a run that will net you five or six yards when you need 15+?

The Cowboys chose a pass play on nine of the 14 plays in the chart above. None of them netted more than 13 yards, most were completions well sort of the sticks. It’d be easy to simply blame this on the quarterback and be done with it, but that would be too simple. The issue here is that the Cowboys don’t seem to have any plays that will reliably result in long completions. And that’s on the QB. But it’s also on the receivers. And the O-line. And the playcalling. And the offensive scheme. And on Jerry Jones, because, well, … because!!!

Perhaps the issues after penalties are symptomatic of a more general issue for the Cowboys offense: the inability to generate big plays when they need them.

Which means the inability to convert after a penalty is not an issue specific to penalties, but is merely an indication of a much broader issue in Dallas.

The Cowboys are a run-first, ball-control offense. As such, the entire offense is predicated on “staying on schedule” with a high percentage of runs and a lot of short passes on first and second down that are designed to get the team into manageable third-down situations. That methodical approach to moving the chains is only occasionally interspersed with a play designed to gain big yardage.

In 2016, that worked perfectly. The Cowboys stormed to a 13-3 record by staying on schedule: No team ran the ball on a higher percentage of first-down plays than the Cowboys, who did it on 59.8% of all first downs. Ezekiel Elliott led the league in first-down rushes with 204, averaging 5.5 yards a pop en route to establishing one of the most efficient offenses in the league that year. The Cowboys averaged 6.84 yards-to-go on third down, the sixth-best value in the league; Dak Prescott had the sixth-best completion percentage in the NFL on third downs (65.1%) and the sixth-best passer rating. All of this resulted in an offense that ranked fourth overall with 2.54 points scored per drive.

The problem is that a penalty (or any other play that results in a loss of yardage), short-circuits that entire offensive plan. Suddenly the offense is derailed and no longer “on schedule”.

And when that happens, teams usually thumb through their playbook until they reach the ‘big-play section.’ Unfortunately for the Cowboys, most of the pages in the big-play section are either blank or filled with plays the team can’t properly execute.

Which is why in 2018, the offense isn’t working anymore. The Cowboys are still running the ball a lot on first down (ranked fourth with 58.4% of runs on first down), and Ezekiel Elliott still runs a lot on first down (ranked fourth with 83 runs) averaging an impressive 5.7 yards. But the Cowboys are now facing 7.38 yards-to-go on third down, which ranks them 22nd in the league. And partly as a result, Dak Prescott’s completion percentage on third downs has regressed to 58.9% and his passer rating on third downs is a subterranean 77.1. All of which results in an offense that ranks just 19th with 1.93 points per drive.

Perhaps the coaching change at O-line will improve an O-line that has allowed 23 sacks (ranked 24th).

Perhaps the addition of Amari Cooper will improve a receiving corps that has accumulated just 595 yards after catch (ranked 31st).

Perhaps Dak Prescott will continue to play as efficiently as he has in the last four games (96.5 passer rating) after his bumbling start to the season (74.5 passer rating in first three games).

Perhaps the Cowboys will trade for a TE.

Perhaps the coaching staff has used the bye week to fill the blank pages in the big play section of the playbook with “cool” plays the players can actually execute effectively.

In the end, the Cowboys of the first seven weeks weren’t able to convert enough plays with 11+ yards to go. Their current 1st-down percentage of 8.7% pales against the 17.2% they achieved in 2016.

Penalties are not derailing the 2018 offense. But the failure to execute their offensive scheme is.

Fix that and things could be looking up again.