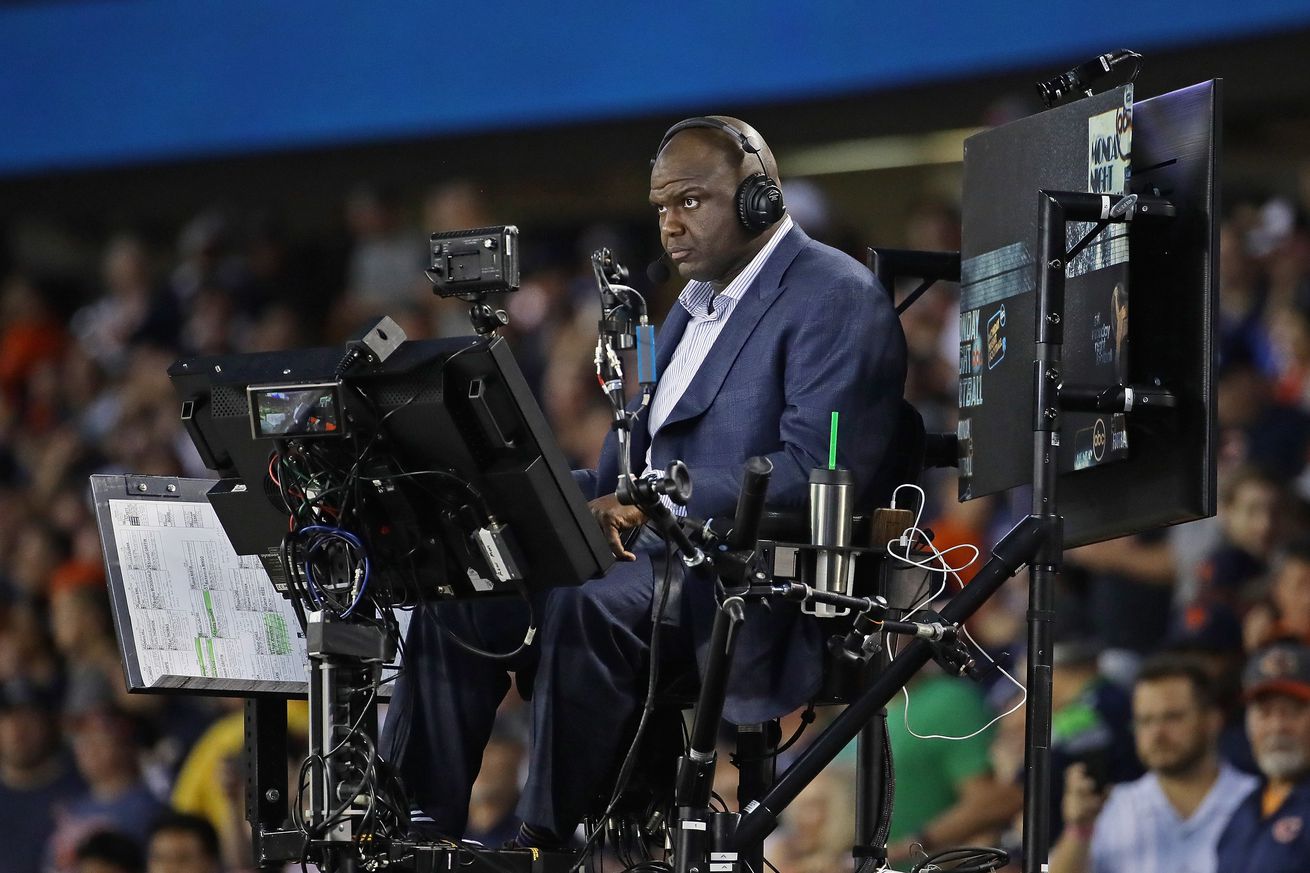 Sean Lee has a thing or two to say as well.

Can Cowboys, Eagles, and other disappointing NFL teams make playoffs? – Christian D’Andrea, SBNation.com
In this look at the prospects for the most disappointing teams in the NFL, the Cowboys wind up with better odds than you would probably have guessed.

The Cowboys were the NFC’s top team in 2016, then backslid to 9-7 in 2017. But Dak Prescott and Ezekiel Elliott were coming back for ‘18 as was the heart of an aging offensive line and many of the important members of a defense that ranked eighth in yards allowed last season.

But while Elliott has looked like the league’s most devastating tailback in stretches and Prescott has wrung as much as humanly possible from an underwhelming group of receivers and tight ends, Dallas is still languishing at 3-4. Jerry Jones’ team has alternated losses and wins, and with the exception of a 40-7 thrashing of the Jaguars, has failed to look threatening or explosive in 2018.

That’s wasted the efforts of an up-to-the-task defense. The Cowboys have been one of the league’s best defensive teams this fall, especially when it comes to shutting down opponents’ home run threats downfield.

Help is on the way, courtesy of a swap that sent a first-round pick to Oakland in exchange for 24-year-old, two-time Pro Bowl wide receiver Amari Cooper. Cooper gives the team the No. 1 wideout it’s been missing, but he’ll have to prove he can return to his 2016 form — and not the 2017 version that caught fewer than four passes per game — to boost Dallas’s uneven offense.

Chance of making the postseason: 50 percent. The NFC East is weird, and getting Prescott some real relief in the form of Cooper could be a difference maker. But Washington keeps hanging around at the top of the division, and the Eagles have a legit MVP candidate behind center. The rest of 2018 could reward Jones’ decision to push his chips into the middle for a playoff push. Or it could see the Cowboys fall flat on their faces. Either one seems equally likely.

NFL trade deadline winners, losers: Packers, Patriots both perplex – Nate Davis, USA Today
Call this analysis of the trades made over the past couple of weeks a split decision for Dallas.

Winner: NFC East. The NFL’s flagship division has been witness to fairly uninspired football so far. The Cowboys fired the first shot last week when they brought in receiver Amari Cooper in hopes of diversifying and jolting their attack. The reigning champion Eagles anted up Tuesday afternoon to acquire Golden Tate — basically a running back with a wide receiver designation, perhaps the ideal addition to Philadelphia’s offense. It didn’t take the division-leading Redskins long to counter those moves by importing Pro Bowl safety Ha Ha Clinton-Dix. Should be a fun stretch run given the NFC East is usually a winner-take-all affair — it’s landed one wild-card entry since the start of the 2010 season — and is shaping up like a one-playoff team division yet again.

Loser: Jerry Jones. In fairness, Cooper has more upside than Thomas and, unlike Tate, is under contract next year. Still, given how run-centric the Cowboys are and how raw Dak Prescott remains as a passer, further concern that Jerry may have surrendered too much freight for Cooper in light of the potential alternatives. Philly got Tate for a third rounder after offering a two for Cooper last week, per multiple reports.

Which NFC East Team Pulled Off The Better Trade? ✭ Brian Martin, Inside the Star
Everybody in the NFC East except the New York Tanks Giants made a pretty significant trade in the past few days. Here is one take on who won.

Although I strongly believe all three of these teams will greatly benefit from the trades they made, I think the Dallas Cowboys ended up making the better deal, even though they surrendered the most.

I know many of you will disagree with me, but I think Amari Cooper was worth investing more in because of his age and the fact the Cowboys have a year and a half to see what they’re getting before having to decide about his long-term future with the organization. That’s just a smart business decision in my opinion.

The Philadelphia Eagles and Washington Redskins have basically eight games with their new players before deciding if they want to extend them long-term. With Golden Tate’s age, he could be looking at one last big payday, meaning the Eagles may have to shell out some big bucks to keep him around after the season. He is definitely worth a third-round draft pick, but his future with the organization is questionable.

Ha Ha Clinton-Dix is a pretty safe investment on the Washington Redskins part as long as he wants to stick around long term. He may not make as much as an impact as either Amari Cooper or Golden Tate, but he might be the safer and most reliable out of all of these trades. If not for his uncertain future in Washington, I might have given the Redskins the nod over the Cowboys.

Cowboys vs. ‘Skins Differences: A ‘Sliver’ Or A ‘Hole’? | 105.3 The Fan staff
The big challenge for the Cowboys in trying to win the NFC East is catching Washington, which has a two game lead after their narrow 20-17 victory over Dallas before the bye. This article breaks down several ways the two teams are very, very close, including this.

Post-Bye Drama Includes Odell’s Catch, OT Wins – Nick Eatman, DallasCowboys.com
Here’s an interesting trend to think about as the Cowboys come out of the bye.

But a trend that must be worth noting is the type of game the Cowboys have been playing in these post-bye weeks. And if it continues next Monday when the Cowboys take on the Titans, just be prepared for some drama all the way until the end.

Aside from last year’s blowout win over the 49ers, the Cowboys have managed to play every one of these games after the bye week all the way to the final minute, and even to the final seconds in some cases.

You’ve got overtime wins, last-second field goals as time expires, touchdowns in the final seconds, missed field goals at the buzzer and just about any other way you can win or lose a game at the end.

Overall, the Titans are a team that is struggling in many facets of the game. Their ability to pick up yards on the ground has been diminished and the teams’ struggles on offense are a direct cause of that. But in a strange twist of fate, they suffer from the same ailments as the Cowboys. They like to run the ball, but have had trouble on that front in recent weeks. They have young quarterbacks that are underperforming compared to past successes. But most importantly, both teams sit with a record of 3-4.

With the NFC East still up for grabs, Dallas has an opportunity on Monday Night Football to remain in the thick of things. If they should falter than their season is likely headed nowhere fast. But if Amari Cooper is every bit as advertised, than the Cowboys’ rushing attack could be the greatest beneficiary. Due to the run intensive, grind it out nature of both teams, this game could very well resemble something that might have been on TV ten years ago.

Sean Lee – the Cowboys ‘old man’ – on Amari and chasing a dream – Mike Fisher, 247 Sports
One thing that has gone better than anyone expected for the Cowboys has been the depth of the linebackers. Jaylon Smith and Leighton Vander Esch didn’t let the team miss a beat while Sean Lee missed time with injuries. Now the veteran is back, and instead of being the guy that never leaves the field, he is in a rotation – and just fine with it.

“Absolutely,” says Lee when asked if he is OK with the rotation, “especially when you have guys who are so talented and good like they are. You dream of a being able to play with great football players. And me getting a rest so I can be more fresh throughout the game and play more games, I’m all for that. Just being part of a great group, not only in my room but defensively. It’s something I’ve always dreamed of so I’m ready to do that.”

Lee says such unselfishness is part of a Cowboys linebacking tradition that for him stems from being a rookie a decade ago and learning from Bradie James and Keith Brooking, and that him taking off plays to make some room for Smith and Vander Esch is made easier by the fact that in the past, “When I’ve been out, the hardest part is when you think you could help your team and (his replacement) is not doing as well.”

Owner Jerry Jones deeply hurt by criticism – Stefan Stevenson, Fort Worth Star-Telegram
This interview with Charlotte Jones Anderson, Cowboys EVP and chief brand officer (and Jerry Jones’ daughter) went up on Tuesday. But since the New York Post thought it was good enough to basically cut and paste, it might be interesting to you.

Q: What’s the biggest misconception about your father?

A: I think one of the things that is most criticized but also one of his best qualities is how much he cares about each player. Sometimes to the extent that he can’t part with the player. He is so invested in each one of them and truly cares about them and their family. The more challenges they have the more he wants to help them and the more chances he wants to give them. I think it’s such a great inspiration for people that are trying to get it together and trying to make things work and trying to get a healthy start, but he often gets criticized for that because he’s ‘giving them too many chances,’ and that ‘he’s too loyal and can’t make difficult decisions’ like that. But if that’s your biggest foible then so be it.