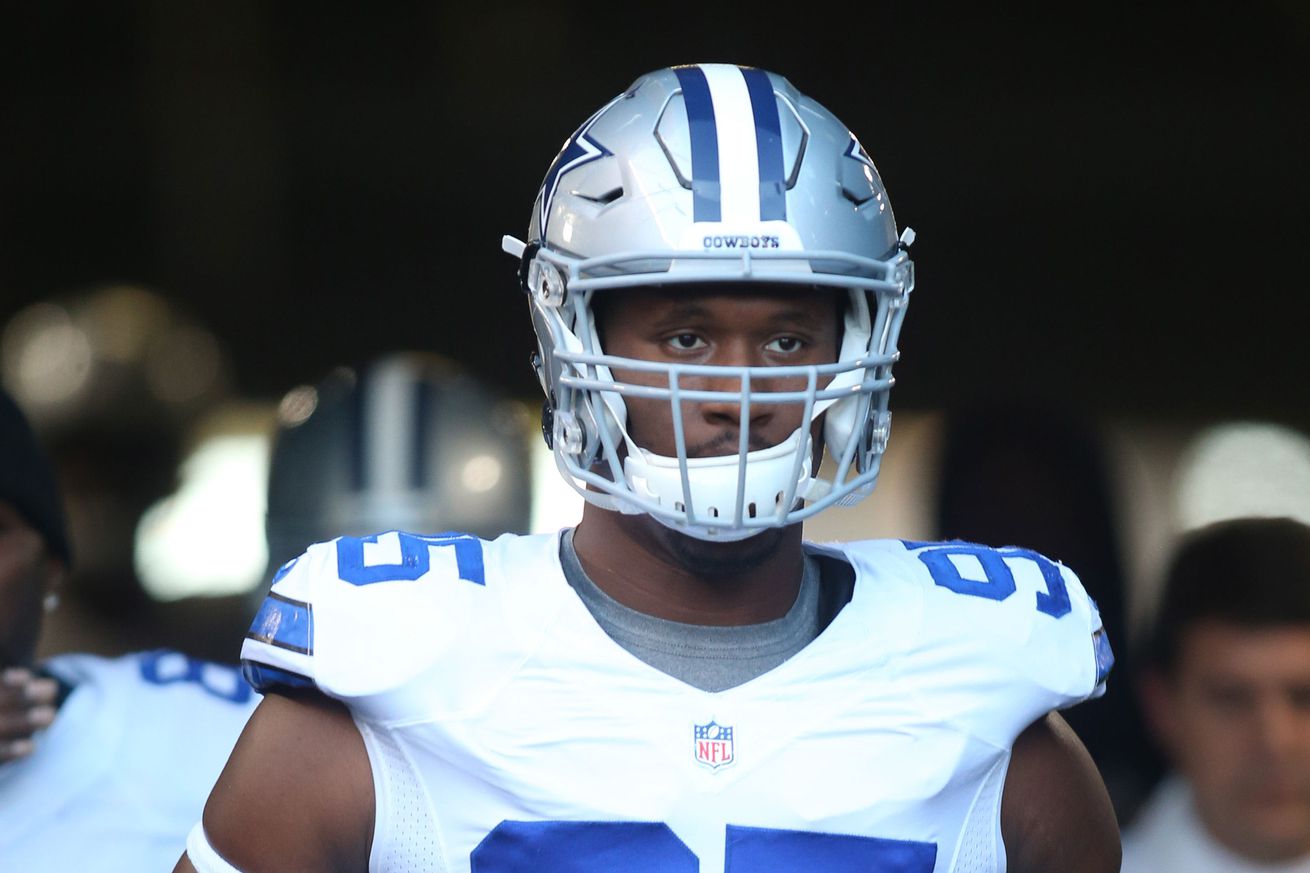 After two games back in the lineup, David Irving suffers high-ankle sprain in practice and his season is in jeopardy

Team is optimistic despite David Irving’s ankle sprain injury-Nick Eatman- Dallas Cowboys
As they do with everything, the Cowboys are calling David Irving’s timetable a day-to-day thing.

Despite being carted off the field during Thursday’s practice, defensive tackle David Irving might still have a chance to play this week against the Titans.

The team officially placed Irving on the injury report with a sprained ankle. However, team officials sound optimistic that not only does the injury not appear to be a major setback, but Irving could play Monday night at AT&T Stadium.

While the injury is considered to be in the area of a high-ankle sprain, Irving and the Cowboys might have avoided a scare. The team still has full practices Friday and Saturday with a light walk-through on Sunday.

Cowboys DT David Irving injures ankle, may not play vs. Tennessee Titans- Todd Archer- ESPN
Irving’s season really just started two games ago, but he had an impact in those games.

David Irving’s tumultuous 2018 season took another turn Thursday when the Dallas Cowboys defensive lineman suffered a high-ankle injury in practice that could keep him out of Monday’s game against the Tennessee Titans, according to sources.

X-rays were negative, but doctor were going to do further examination.

He has played in just two games this season after opening the year on a four-game suspension for violating the NFL’s substance abuse policy. He was inactive for the first game he was on the 53-man roster because of a family issue.

In the two games he has played, the coaches credited Irving with three tackles, a sack, a tackle for loss, two quarterback pressures and a pass deflection in 56 snaps.

#Cowboys DL David Irving, who was carted off in practice, is believed to have suffered a high-ankle sprain, sources tell me and @SlaterNFL. X-Rays were negative. He’ll still have tests, but the early returns are not as bad as they could’ve been.

’It hurts … a lot’: Cowboys DT David Irving to get opinion from team physician on high-ankle sprain -David Moore- SportsDay
Irving was in pain after the injury.

David Irving was on crutches, trying to steady himself, with his left foot in a boot. Dak Prescott walked past as the defensive tackle turned to leave the Cowboys locker room.

”You OK?” the quarterback asked.

Irving injured himself in Thursday’s practice and was carted off the field. X-rays were negative. The initial diagnosis is a high-ankle sprain, an injury that should keep him from playing Monday night against Tennessee and beyond.

Irving was on his way to see team physician Dr. Dan Cooper for a more thorough evaluation as he left the locker room.

”Can’t now,” Irving said when asked if he could stop to talk. “Going to get another opinion. I should know more tomorrow.”

WR Amari Cooper’s says he feels no pressure -Clarence Hill- Fort Worth Star-Telegram
Amari Cooper is calm ahead of his first game with the Cowboys but believes he’s going to make an immediate difference in an offense that needs him.

“Yeah, there is definitely a sense of urgency being that I just got here and we have to play this week,” Cooper said. “I have to go out there and play on Monday and it’s a completely new system. But like I said, at the end of the day it’s football. I’ve played in a couple of different systems now so, you know, after a while you are really doing some of the same things they just call it something different.”

Why Tyron Smith Is His Own Toughest Critic- Rob Phillips-Dallas Cowboys
Tyron Smith is well aware that he hasn’t played up to the expectations he sets as an All-Pro left tackle, he hopes to change that fresh off the bye.

“For me, I’m someone that’s hard on myself,” he said Wednesday. “I feel like I can always do better. I’m not too happy with how I’ve been playing. There’s things I have to get fixed and get better for my teammates.”

“There were problems across the board we had to get fixed,” Smith said. “It wasn’t just one certain thing, but we have to get this thing moving forward.”

Did Tyron Smith’s poor play get the Dallas Cowboys’ offensive line coach fired? -Clarence Hill- Fort Worth Star-Telegram
Though the Cowboys offensive line has struggled through the first seven games, Tyron Smith doesn’t believe any one person is responsible for Paul Alexander getting fired.

For the record, Pro Bowl left tackle Tyron Smith said he doesn’t believe his disappointing play or that of the offensive line had anything do with position coach Paul Alexander getting fired during the bye week and replaced by top assistant Marc Colombo.

“Not at all,” he said. “Something like that happens, it’s not really nobody’s fault. Nobody is really in control of something like that. We don’t really pay too much attention to it. Focus on what we can control.”

What’s also true is that nobody has symbolized the decline in play of the Dallas Cowboys offensive line under Alexander more than Smith, a former All-Pro and perennial Pro Bowler whose $17.5 million cap hit is the highest on the team.

”We felt like we had a good solution in giving Marc Colombo the opportunity to be the main line coach and the opportunity to bring Hudson Houck back, who has been with us before, I know him well, this organization knows him well, and we felt like him and Marc working together would allow us to create the type of environment for the offensive line where they could be their best.”

Discussions began last week during the bye week about Alexander’s fate. Garrett said the decision to fire the veteran offensive line coach was his. Garrett returned from a weekend trip to Los Angeles on Sunday evening and informed Alexander of the move Monday morning.

What will the Cowboys roster look like in 2020? Who’s a lock? Who’s on the bubble- Bill Barnwell- ESPN
NFL rosters turn over quickly, and your favorite Cowboys players could be gone soon. How about a prediction of who stays and goes? Barnwell’s first lock is pretty polarizing at the moment.

Though the Cowboys still might theoretically move on from Prescott, there really hasn’t been a quarterback in recent memory who played as well as Prescott has during his rookie contract and subsequently failed to get an extension (barring injury).

Cowboys defense shutting down big plays like it’s nobody’s business -One.Cool.Customer- Blogging The Boys
Good luck going deep against the Cowboys this year, it’s not been particularly good for many of the Cowboys opponents.

So far this season, the defense has allowed just 28 big passing plays, the lowest total of any team in the league. That won’t stop many Cowboys fans from believing the apocalypse is upon us every time the opponent completes a pass of 16+ yards, and that happens on average four times a game, but that doesn’t change the fact that the Cowboys defense is highly effective at shutting down big passing plays.