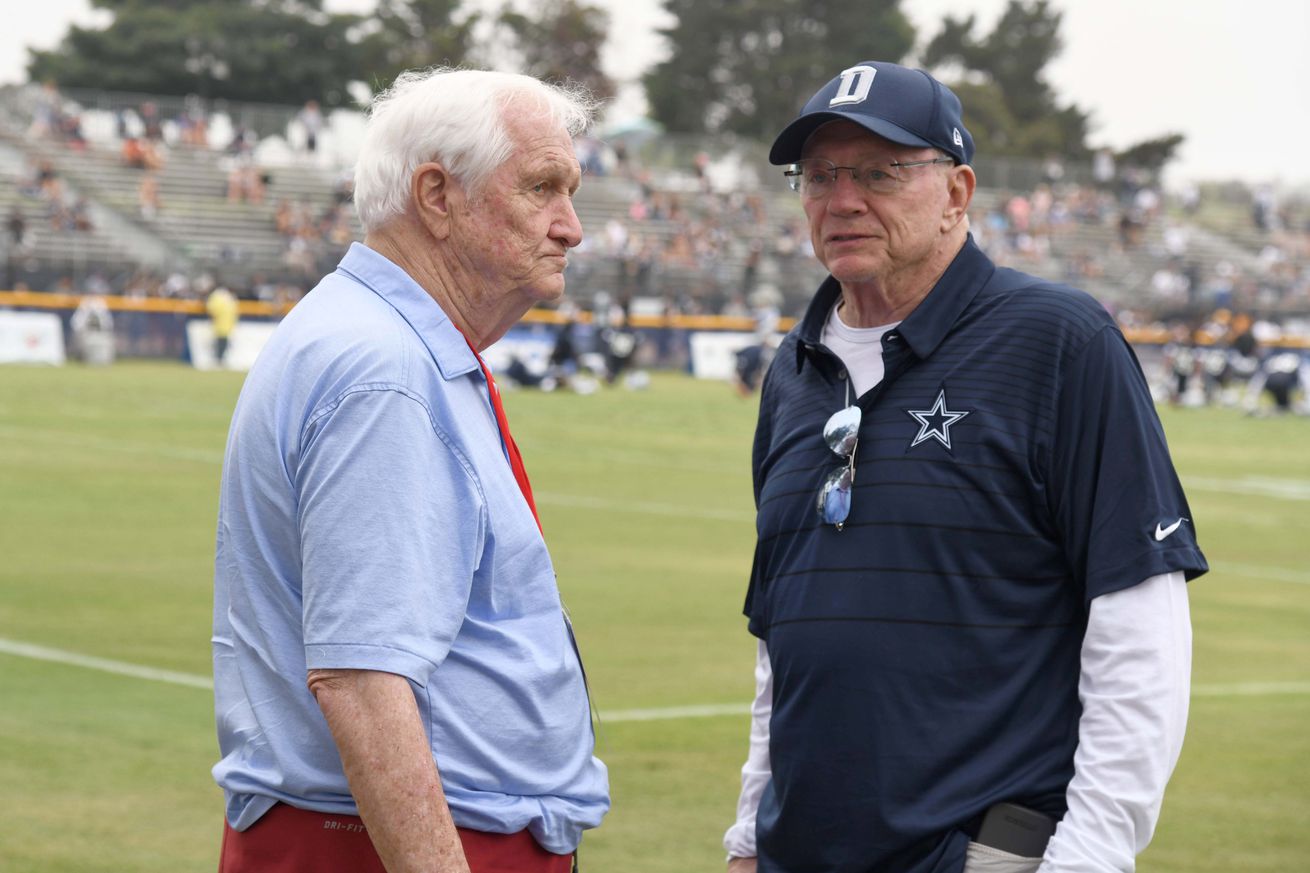 Jerry Jones will induct scouting legend Gil Brandt into the Cowboys Ring of Honor. Long overdue, but much deserved!

Former Dallas Cowboys executive Gil Brandt will be the 22nd member of the team’s Ring of Honor, owner Jerry Jones announced on Friday. Brandt will be inducted at a ceremony on Nov. 29, before Dallas hosts the New Orleans Saints on Thursday Night Football at AT&T Stadium.

”When Jerry called me with the news, it was on par with walking off the field after winning the Super Bowl,” said Brandt, who spent 29 seasons in the Cowboys’ front office as the team’s lead scout and contract negotiator — his final after the 1989 draft in which he selected Troy Aikman, one of 19 players currently in the team’s Ring of Honor, 15 of which Brandt personally acquired via the draft or trade.

What Kind Of Effect Can Cooper Have For Zeke? – David Helman, DallasCowboys.com

The addition of Amari Cooper will not only help quarterback Dak Prescott, but it will also open up things for Ezekiel Elliott. The mothership breaks down the effect Cooper can have on the Cowboys bell cow back.

FRISCO, TEXAS – For 10 straight days, we’ve been asking all the wrong people about the Amari Cooper trade.

Of course, the front office, the coach, the receivers coach and the quarterback can all provide valuable insight into the addition of a Pro Bowl receiver to the offense.

But who could possibly be happier about adding a new weapon to the offense than Ezekiel Elliott – the guy who’s charged with running the offense against stacked defensive fronts, week in and week out?

“I think it’s a great move. He’s a special player,” Elliott said Thursday. “You can just tell he’s special by the way he runs around. He’s electrifying and he’s just one of those guys where you kind of hold your breath every time he catches the ball.”

Trading for Cooper makes sense on a lot of levels, and even if you disagree with the compensation, you have to be excited about the upside of this receiving corps moving forward. Amari Cooper as the X, Cole Beasley in the slot, and Michael Gallup as the Z receiver.

Despite trading for Amari Cooper, and hopefully re-signing Beasley this upcoming offseason, the Cowboys need to make sure that Gallup’s development is towards the top of their priorities. They can’t allow an average-at-best veteran receiver to take his snaps on the outside, no matter what his price tag currently is.

After some speculation that he may play, David Irving has ruled himself out for Monday Night Football.

At the close of practice on Friday heading into Week 9, the Dallas Cowboys’ pass rusher spoke to media about the ankle injury that forced him to be carted off only one day prior. Early reports are that he’s suffered a high ankle sprain but the Cowboys are still awaiting MRI results to confirm the full diagnosis, with some being optimistic about his availability. Irving himself isn’t, however, telling reporters he won’t be on the field when the team hosts the Tennessee Titans on Monday Night Football — according to Calvin Watkins of The Athletic.

Are the Cowboys in a position that they can handle the David Irving injury, due to their depth at defensive tackle?

Mosley: It doesn’t negate the injury. David Irving is a special player. It certainly mitigates it to a certain extent. The defense played really well when Irving sat out those first five games, so they can perform without him. I want to keep my eye on Lawrence in these next couple games. He’s been banged up a bit. I want to see how much it’s affecting him. You need Taco Charlton to really step forward in this game.

Whew… those are some strong words from a guy who rarely speaks.

The offensive line is hardly the only issue with the team. Dallas also traded for receiver Amari Cooper during the bye week. So why does it seem as if all the blame is being placed on the o-line?

“In this game, there’s no opportunities for excuses and explanations. It’s a results-oriented game,” said Frederick, when it was pointed out that he’s been out of the lineup and rookie guard Connor Williams has started every game. “Even if things aren’t working your way you have to be able to provide and perform. If you’re not, then something’s got to change. In this case they made a change at the coaching level but you often see it at the personnel level as well.”

Frederick said some of his teammates reacted differently to Alexander’s techniques, but he plans on keeping some in his “tool box.” He said going forward it’s not about assigning blame for any failures in the first seven games, but getting it fixed quickly.

“This isn’t a one-man blame game. Something wasn’t working and we needed a change,” he said. “For us, it’s a shot to us as a group, saying ‘Listen, this has got to get better.’ We need to figure out not whose fault it is but what we can do to get better.”

Cowboys’ issues can be fixed after firing of O-line coach – Nick Shook, NFL.com

A lot of football analysts seem to think that the firing of Paul Alexander was the right move for the Cowboys future success. Here is what Nick Shook of NFL.com has to say about the move:

Is that a product of Alexander’s coaching or a difference in personnel? There’s a clear drop-off with Williams and Looney on the interior as opposed to Frederick and a guard such as Leary, who’s now in Denver (and on injured reserve thanks to an Achilles injury). But there’s also an underlying problem dealing with stunts, both in the vision needed to identify and adjust, and familiarity with teammates to get the job done. Those are fixed over time with familiarity (and resulting trust gained), and also with communication and film study to both fix problems and be able to prepare for upcoming defensive approaches.

At this point, with the Cowboys at 3-4 and two games behind division-leading Washington (fresh off a close loss to the Redskins), there’s time to fix things. That can explain the firing of Alexander. But it’s more than just coaching with this team.

Can the Dallas Cowboys turnaround this season and make the playoffs? – Richard Ball, Fansided

The Cowboys have made a few noteworthy moves over the last few weeks, they really need those moves to payoff sooner rather than later if they want a shot at the playoffs.

In her recent NFL.com article, Cynthia Frelund published the results from the 20,000 simulations she ran from her win-loss model. Frelund projects the Dallas Cowboys to win 7.4 games.

Her model also gives Dallas a 15.5 percent chance of making the playoffs. With nine games remaining, I will explore which games I think the Cowboys can win.

America’s Team will make their only appearance on Monday Night Football against the Tennessee Titans on November 5th. The Titans sport the 30th ranked offense and 11th ranked defense. Let’s go with the win at home pattern.

QB Dak Prescott on Cowboys season that hangs in the balance: ‘The time is now’ – David Moore, SportsDay

Dak Prescott is “all in” on the season, and it all starts now.

This season hasn’t slipped away from the Cowboys, but it’s close. These next three games — Monday night at home against Tennessee before the team takes to the road to play Philadelphia and Seattle — will determine whether or not Dallas is a viable playoff contender.

”It’s about stacking good days of practice on top of each other so we can stack good weeks and obviously that turns into stacking wins,’’ the Cowboys quarterback said. “We need to get on a win streak.

One Draft Prospect Each NFL Team Should Already Be Thinking About – Maurice Moton, Bleacher Report

It’s never too early to talk about the NFL Draft. Here’s a prospect that Bleacher Report’s, Maurice Moton thinks the Cowboys should be interested in.

The Dallas Cowboys should be focused on adding more offensive threats for quarterback Dak Prescott. Heading into Week 9, Dallas’ passing offense ranks 29th in the league.

The Cowboys sent a first-round pick to the Oakland Raiders for wide receiver Amari Cooper, who figures to become Prescott’s No. 1 target moving forward. They should next turn their attention to finding a long-term replacement for Jason Witten.

The Cowboys have a huge game coming up on Monday Night Football. Here’s how Bryan Broaddus thinks the Cowboys passing attack can find some success.

As much as I want to believe they will need balance to defeat the Tennessee Titans, I see passing the ball as the best plan of attack. I understand that just having Dak Prescott throwing the ball around might not be the most ideal situation, but with the way the Titans play in the secondary it is the best avenue for creating big plays.

Every game that I studied for the Titans defensively had an opponent coming up with large chunk plays throwing the ball down the field. To execute this plan of attack, the Cowboys are first and foremost going to need to protect Prescott. He has suffered far too many hits and sacks, so this needs to be corrected quickly. The Titans don’t have that dynamic edge rusher, but that doesn’t mean they can’t create pressure.