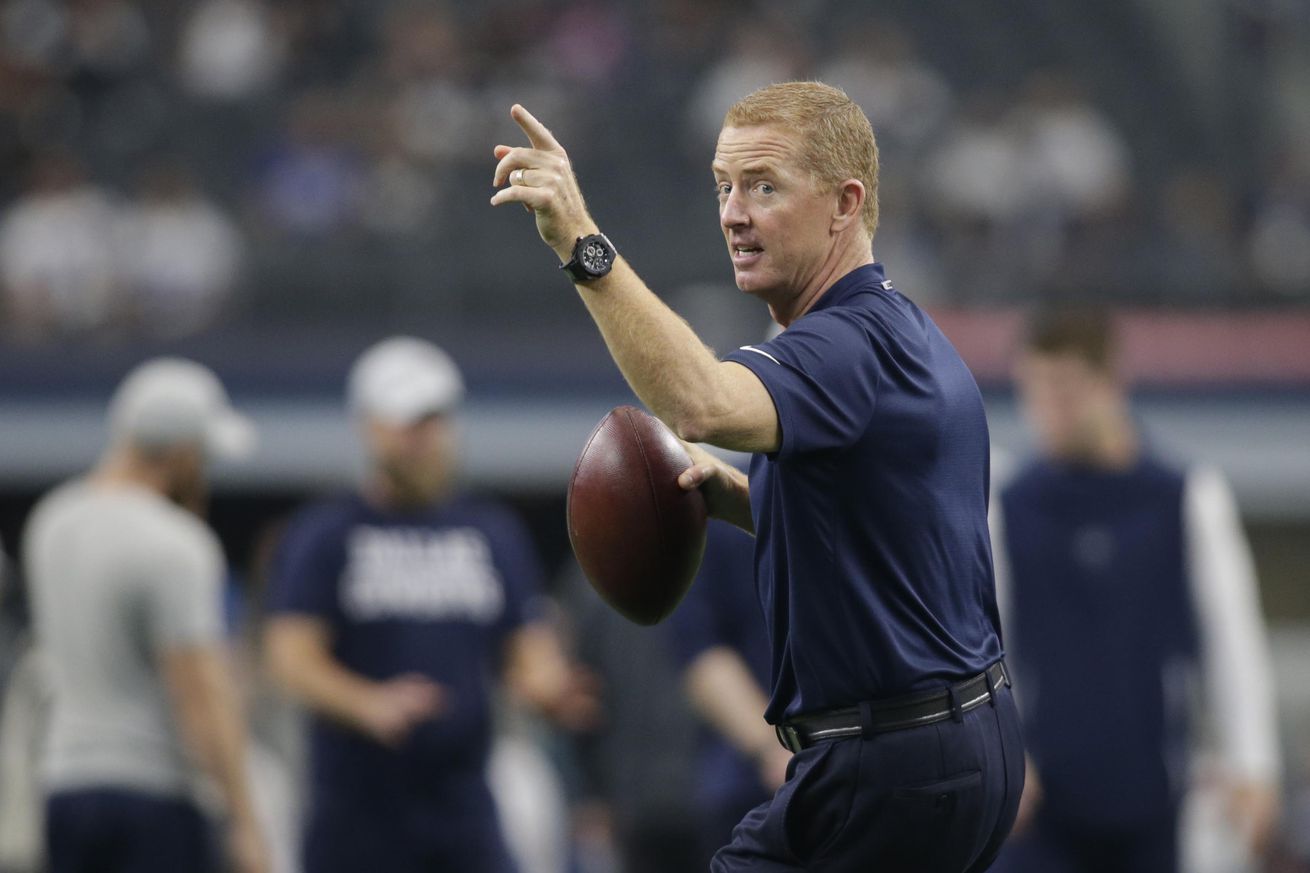 The Jones family has always stuck by Jason Garrett, but will these last nine games determine his fate once and for all?

From the moment the Jones family removed the interim tag and made Jason Garrett their next head coach, they have all practiced an extreme amount of patience. This organization has been about as patient with their coach as any outside of the Bengals with Marvin Lewis. Maybe Jerry Jones is using his past regrets as a guide for this determination to make it work with Garrett.

Prior to Garrett, the Cowboys averaged a new coach every three years and Jerry has always felt firing Chan Gailey after two seasons was a misstep. This ownership has emphatically stood behind this coach, despite only two postseason appearances now halfway into his eighth season. Any time he has been asked this season, Jones routinely shoots down the suggestion that Garrett’s seat is even lukewarm. It makes you wonder if a switch was flipped during this past bye week. This team’s actions have shown they are in win-now mode by trading next year’s first-round pick for Amari Cooper and firing a position coach midseason. Well, what happens if they don’t win?

I’ve long supported Garrett as have many of my colleagues, but a second straight year without a postseason appearance would justify making a move. Garrett has always had a plausible, yet convenient, excuse in the past why you shouldn’t fire him. Think about it, when the Cowboys had three straight 8-8 seasons, the lack of talent was the culprit. They finally came close in 2014 but lost Tony Romo in week two of 2015 which made a 4-12 season excusable. After embarking on a new era led by rookies Dak Prescott and Ezekiel Elliott in 2016, they certainly weren’t making that change. Even this past year when they missed the playoffs at 9-7, they put that one on the six-game suspension of Elliott and other missing key players.

It’s always been difficult to figure out what kind of coach Garrett is because there are times where he can get his players to run through brick walls for him. There are also mistakes that can be directly attributed to decisions he has made. This season has been a perfect example of the roller-coaster you are on with these Cowboys.

After the Cowboys lost to the Texans in overtime, Garrett was vilified for lacking guts to go for a 4th-and-1 at Houston’s 42-yard line. As always, Cowboys social media was ablaze, waging war about who to blame. Mainstream media was grabbing quotes from Cowboys receiver Allen Hurns, who seemingly called out the offensive coordinator, Scott Linehan. It was a tumultuous week with the Jaguars top-rated defense coming in.

Convenient timing struck again as Garrett’s Cowboys hung 40 points on Jacksonville when nobody thought they would get more than a few field goals. All excitement was deflated the very next week. With sole possession of the NFC East on the line, Dallas went to Washington and lost their fourth straight road game.

So, here they are at 3-4, with a struggling Titans team on the horizon at home. It’s a game that they should by all rights win and since it’s a home game, the odds are that they will. Their home and away splits are the only indicator of expectations we have had this season which points to an 8-8 finish that won’t be acceptable. That’s why it looks like they are trying at all costs to avoid that by paying such a high price for their new receiver. The front office is fixing any mistake they can to remove excuses away from the 2018 Dallas Cowboys.

That’s why these last nine games will weigh heavily on this coaching staff because the wagon is hitched to the majority of the talent. Dak Prescott is one of many players on offense that must play better but he’s not going anywhere soon. Such is the same with Tyron Smith, La’el Collins, and this offensive line. The only thing to do is win football games and hope that these moves will indeed make them a better football team.

Jason Garrett has been successful before when he’s backed up against the wall but the climb ahead has never been steeper. The Cowboys are the 12th NFC seed, looking up at the Buccaneers, Falcons, Packers, Seahawks, and Panthers. They have already lost to two of those teams so hopes for a wildcard berth would require more than one of them to collapse. Garrett is going to have to win the NFC East and he’s down two games to the Washington Redskins right now. Garrett still has one more game to get even with Washington, followed by two against the Eagles, and one more date with the Giants. Though it ultimately comes down to the division crown, Garrett will likely need wins at Atlanta and at home against Tampa Bay.

All in all, Jason Garrett is facing a daunting task that will require him to go 7-2 the rest of the way. He was able to finish 7-4 after a 2-3 start last year but he’ll need to be better this time around. It may seem a little unfair to pin everything on the coaching staff but this regime received the benefit of the doubt last year. They doubled down on Jason Garrett and his right hand man, Scott Linehan. They switched out all but one offensive position coach and allowed Linehan to hand pick his own staff.

The events of this past bye week is yet another example of this organization’s investment in Garrett and his staff. It’s now time for tangible results because eight years is quite a long time to keep asking for “trust in the process”. That’s especially the case for a process that has yielded only one playoff win.