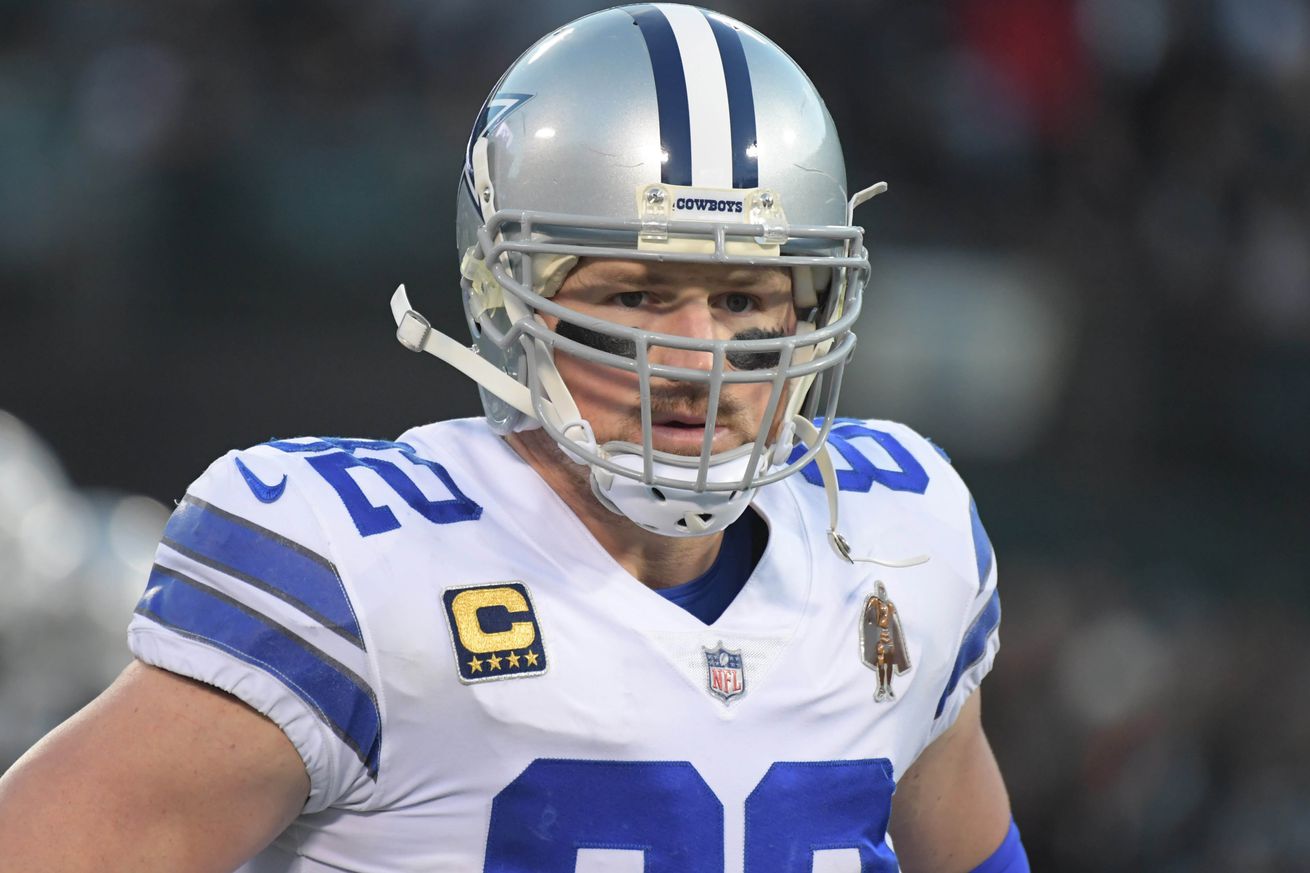 Here’s an early look at how the Cowboys plan to honor former tight end Jason Witten during Titans game – Kristi Scales, SportsDay
The Cowboys host the Titans tomorrow night on Monday night football, and Jason Witten is making his return. Here is what the Cowboys are planning to do to honor ‘Gold Jacket Witt’.

During the AT&T Stadium Rally Day event on Sunday, stadium crews had already put the finishing touches on a sign that stretches nearly 50 yards and covers the top of the field-level suites behind the north end zone. The sign simply says “Welcome Home 82”.

And when Jason Witten looks into the stands from the field during pregame…or from the broadcast booth during the game…he’s likely to see fans wearing a new t-shirt that is available in the Dallas Cowboys Pro Shop at AT&T Stadium. The front of the blue t-shirt has a blue Cowboys’ star and underneath, written in gold, is simply “Jason Witten”. But the back of the shirt has a long paragraph with a quote from Witten during his retirement press conference.

Looks like the Cowboys plan on welcoming Jason Witten home the same way they did Tony Romo – RJ Ochoa, BTB
The Cowboys will honor Witten in similar fashion as they did when Tony Romo made his return to AT&T Stadium last year.

Our own Danny Phantom speculated as to whether or not Tony Romo will return the favor and narrate Jason Witten’s video, but we’ll have to wait until Monday night to find that out. One thing we don’t have to wait for is to see what Jason Witten’s banner looks like. It’s very similar to Tony Romo’s, just with the name, number, and new place of work altered.

Hello from Rally Day at @ATTStadium where @dallascowboys crews have put the finishing touches on a special welcome for old #82 who will be back home for Monday’s game versus Titans pic.twitter.com/doKj0FqJWD

Cowboys-Titans Pick: How Will Amari Cooper Factor into Dallas’ Gameplan? – Andy Benoit, SI
For the game itself, how will newly acquired Amari Cooper fit into the offense on Monday?

1. With deficient wide receivers, analysts have been calling for the Cowboys to feature fewer spread formations and iso routes, and more multifaceted route combinations to help their passing game. When receivers can’t win on their own, your scheme must aid them. Jason Garrett and offensive coordinator Scott Linehan have become more receptive to schemed passing concepts as this season has progressed. But will that continue now that Amari Cooper is here? It’s easy to envision the Cowboys using Cooper’s first-round price tag and hefty contract to justify a return to their old spread tactics. They clearly see Cooper as a true No. 1 receiver, and a true No. 1 should allow you to spread out. The problem is Cooper, because he sometimes struggles against press coverage, is not a great iso-route player—that’s why Oakland traded him. Like Dallas’s incumbent receivers, Cooper is better as part of a route combination. The sooner the Cowboys realize this, the better.

Bold prediction: Against a fast-flowing Cowboys defense, the Titans will have more turnovers than touchdowns.

Betting guide for Titans-Cowboys – Warren Sharp and Preston Johnson, ESPN
What are the best bets for Monday’s game? Sharp and Johnson have you covered.

Sharp: The Titans’ offense hopes the bye will help them get back on track now that quarterback Marcus Mariota is healthy. Tennessee has the NFL’s fifth-worst offense and is extremely run-heavy. That’s a bad recipe for success against the Cowboys, because they have a highly underrated run defense, ranking No. 4 in the league. I’ve been extremely down on offensive coordinator Matt LaFleur’s offense, which looks nothing like the diverse offenses of the Rams or 49ers after studying under Sean McVay and Kyle Shanahan.

The Cowboys are undefeated at home this season while the Titans are 1-2 on the road and have fallen well short of expectations. Dallas was held in check on the ground two weeks ago against the Washington Redskins and with the bye week mixed in, and coming off a disappointing outing, this looks like a great spot for Elliott to rebound. The Titans have looked pedestrian this season and even in victory they haven’t looked like a playoff contender and, while they have covered the number in six straight Monday night games, they are in tough here. Dallas is 6-1 ATS in their last seven following a game in which they accumulate fewer than 90 yards rushing, and 9-4-1 ATS in their last 14 against a team with a losing record. The Cowboys keep those numbers trending in their favor.

Where can the Titans offense take advantage of the Cowboys defense? – Jimmy Morris, Music City Miracles
Let’s check in on the Titans’ side of things. Where do they think they can attack the Cowboys’ defense?

There are a couple of areas where the Cowboys defense can be exploited. They rank 22nd against the tight end and 24th against the running back in the passing game. They have up 14 catches and 80 yards to Saquon Barkley and 8 catches and 73 yards to Alfred Blue(!). Hello Dion Lewis! I would love to see Lewis get 6-8 targets in this game.

*One thing that should be pointed out here is that the Cowboys play at the 4th slowest pace in the league according to Football Outsiders. That is going to make their yardage stats look better because there is less opportunity for the opposing offense.

All-22 Review: The Titans offense comes alive (kinda) in London – Mike B. Herndon, Music City Miracles
MCM also had a nice All-22 review of Marcus Mariota and the offense.

As frustrating as the drops were, this was a pretty encouraging performance from the Titans offense. The run game finally got going and Jonnu Smith played his best game of the season in my opinion. Mariota was nearly perfect through the air against a tough Chargers secondary and the playcalling with a few glaring exceptions was much better.

Getting Quinton Spain and Josh Kline back for the Dallas game will be massive for this offense. The fact that Mariota is getting rid of the glove and now claims to have full feeling back in his throwing hand shouldn’t be overlooked either. Some of the hesitation that we’ve seen from him the last few weeks could still have been tied back to a lack of confidence in his grip as much as a lack of confidence in his receiving options.

It will be interesting to see how they work Jalston Fowler in to the gameplan as well as any changes that may have come from an extra week to spend self-scouting and making adjustments for the second half of the season. While LaFleur’s first 7 games haven’t exactly impressed, it’s important to remember this is his first time as an NFL playcaller. No matter how much you prepare for a job — football or non-football — it takes doing it in live situations for a while before you truly get comfortable and figure out what works for you. There is some hope to be taken from this Chargers game for the Titans offense. If things crash back down to the mess that were the Bills and Ravens games the panic button will be firmly on the table, but there is at least some reason to believe that won’t happen.

Dallas is past the need for a sense of urgency. It’s now or never for these ‘Stepford’ Cowboys. – Kevin Sherrington, SportsDay
The Cowboys desperately need to win this game in order to save the season.

The catch phrase in the Cowboys’ locker room late in a surprisingly busy bye week was “a sense of urgency,” which seems less a rallying cry for a season unraveling than a Lifetime movie selection. “Panic Room” would have been the title most places, but this bunch doesn’t spook easily.

If ever a team took a cue from its coach, it’s these Stepford Cowboys. Why, listening to Jason Garrett extol the virtues of a weekend getaway, you’d have never guessed that he’d only recently fired his offensive line coach or signed off on giving away a first-round pick or had any clue whatsoever that a division title slowly slips from his grasp.

Just the same, don’t let appearances fool you. The head coach gets it, in his own slightly animatronic fashion. He knows he has to win at least six of his remaining nine games, starting Monday night with the Titans at JerryWorld.