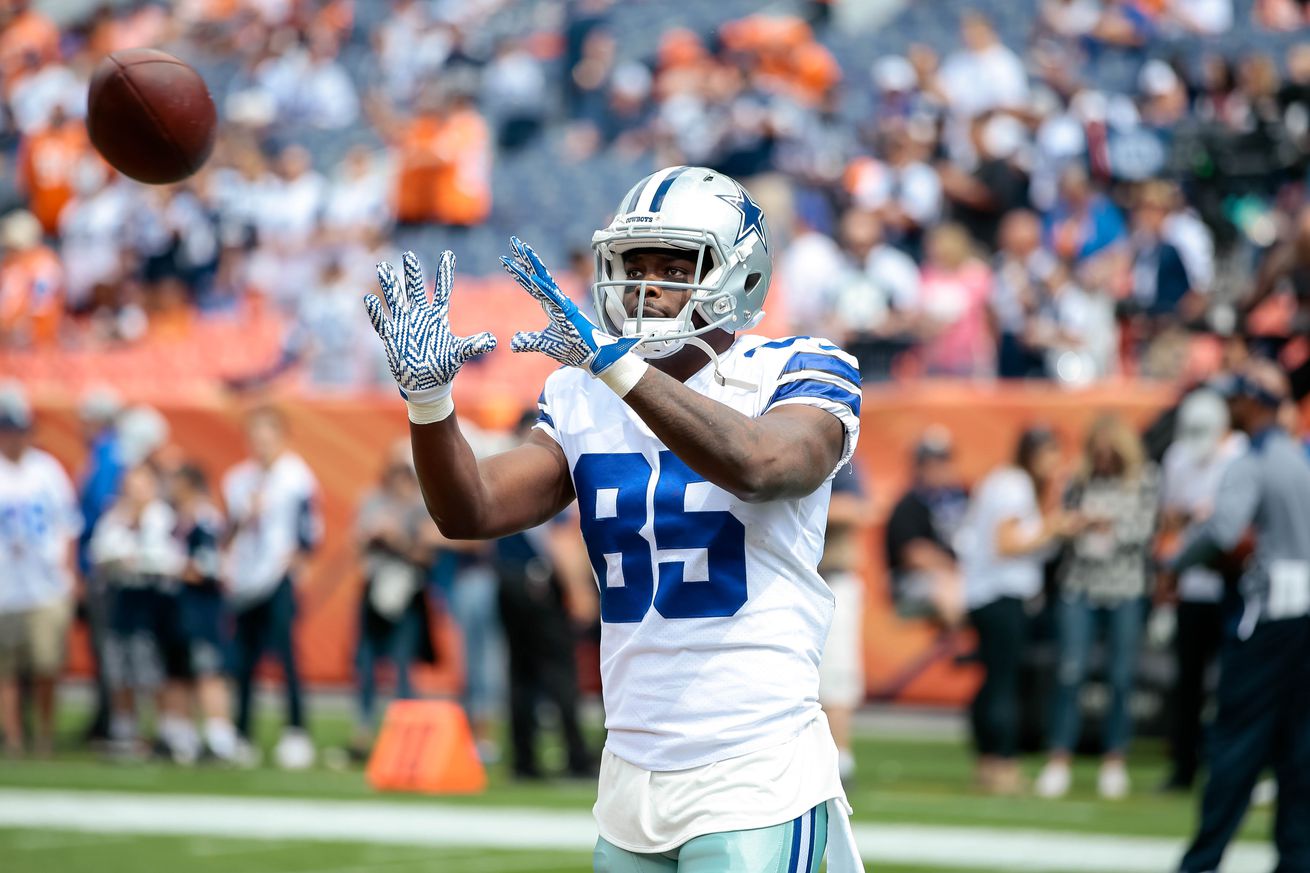 The team confirmed Friday afternoon that two receivers are joining the 53-man roster, as Noah Brown is being activated from injured reserve and Lance Lenoir is coming up from the practice squad. To make room on the roster, the Cowboys released veteran receiver Deonte Thompson and second-year cornerback Treston Decoud.

The Dallas Cowboys are doing more shuffling at receiver as they try to revive one of the NFL’s worst passing attacks before a critical game at Philadelphia.

The Cowboys on Friday waived one of their key offseason free agent pickups, receiver Deonte Thompson, while activating Noah Brown off injured reserve and promoting Lance Lenoir from the practice squad.

The moves come two weeks after the Cowboys traded their upcoming first-round draft pick to Oakland for receiver Amari Cooper, who was solid and scored a touchdown in his Dallas debut, a 28-14 loss to Tennessee.

Will a blowout on Sunday night get Jason Garrett fired? – Mike Florio, ProFootballTalk
What happens if the Cowboys suffer another blowout in Philly, like the 37-9 last year other blowouts at the hand of the division rival?

Another outcome like one of those outcomes could end up being the final nail for Garrett, and his final act as head coach of the team. While he may still be clapping on the way out the door, Garrett definitely won’t be exiting to a round of applause from Cowboys fans who are currently clamoring for change.

Charean Williams, who covered the Cowboys for many years with the Fort Worth Star-Telegram and still follows the Cowboys very closely for PFT, explained on Friday’s PFT Live that Jones pays attention to all opinions and criticisms of his team, and that he’s keenly aware of the mounting criticisms and clap-driven caricatures of Garrett. Jones also surely realizes that the Dallas offense lacks the kind of creativity and ingenuity that allows other teams to exploit the tendencies of opponents and exploit mismatches presented by any and every given defense.

Jerry Jones might want to consider calling up an old friend – Matt Mosley, SportsDay
Could a familiar face find his way back in Dallas if things don’t turn around in offensively? Matt Mosley thinks it could be an options Jerry Jones is looking into.

Q: So do you think Jason stays and hires an offensive coordinator that suits Dak?

Mosley: It’s hard for me to envision Jason Garrett staying if the Cowboys continue down this path. It wouldn’t shock me if Jerry Jones turned to old pal Norv Turner to try and right the ship for Dak Prescott. Turner has done a really nice job with the Panthers this season, although last night was a rough one.

What’s wrong with the Cowboys? We searched for a diagnosis – Calvin Watkins, The Athletic
Watkins goes hunting for answers and talked to some folks. An excerpt:

Garrett is 70-58 in eight seasons as the head coach, and while he’s respected in the locker room, an agent with a client on the Cowboys offered this view.

An agent with a client on the Cowboys said the offensive staff is dysfunctional and it’s hurting Prescott’s ability.

“They need to straighten things out,” said the agent. “Just look at how they play on offense.”

Troy Aikman, who won three Super Bowls with the Cowboys, said the entire organization needs a complete overhaul. An AFC scout who has seen the Cowboys play said the issues reside with Jerry Jones.

An executive from an AFC team said the Cowboys can still save their season because they have four division games remaining on their schedule.

“We’ve been through tough stretches when he played here. These are tough stretches. People are going to be critical. Take their shots. I’m fully aware that this is a time that we should be criticized.”

Dez Bryant’s season is over before it even started. Now, the question is whether his career is over too.

Bryant, who signed a one-year pro-rated deal for $600,000 with the New Orleans Saints on Thursday, reportedly tore his Achilles’ tendon at practice Friday.

While he was looking for the right team, Bryant didn’t participate in any offseason OTAs or minicamps. He missed all of training camp, and hadn’t practiced with an NFL team until Sunday.

One of the reasons the Saints ruled him out of Sunday’s game against Cincinnati is they wanted him to lose about five pounds and give his body time to acclimate to playing NFL football.

So, Dallas’s Cole Beasley, one of the NFL’s better slot receivers, is headed to town. Who’s gonna cover him?

”I’m not going to disclose the nickel,” Eagles coach Doug Pederson said Friday. Then Pederson hinted that Jones – who had already said he was pointing toward next week and New Orleans – might still play this week, Pederson speaking a few hours before the Eagles announced Jones wouldn’t play.

Players have been told not to divulge what the setup will be, but there are two obvious paths: 1. Bring former backup nickel corner Avonte Maddox down from safety, where the rookie has been doing very well, and replace Maddox with veteran safety Corey Graham, who has missed the last three games with a hamstring injury, but is now healthy. Or, 2. Keep Maddox where he is and throw LeBlanc into the nickel spot, on the strength of three practices in the Eagles’ defense. LeBlanc said he played a lot of nickel for the Bears in 2016 and 2017.

This’ll be about as obvious as inactives get all year long. The Cowboys have ruled six guys out on Friday, including Taco, David Irving, Sean Lee & Connor Williams.

Gut Feeling: Predictions For Cowboys-Eagles – DallasCowboys.com
Who takes home the victory on Sunday night? The mothership crew gives their predictions, and you might be shocked who Bryan Broaddus picks to win.

Bryan Broaddus: I have lived my NFL life believing that desperate teams find ways to win games when nobody believed they could. The Dallas Cowboys are a desperate team. Their season is clearly on the line here and their only real hope of making the playoffs will likely come by winning the NFC East. The Philadelphia Eagles have had their own issues this season and playing at Lincoln Financial Field for opponents hasn’t been as difficult as it has been in previous seasons. Like the Tennessee Titans last week, the Cowboys are going to have to weather the storm because I could see this game having some huge swings in it. Dak Prescott, Amari Cooper and DeMarcus Lawrence will step up, the Cowboys won’t fold under the pressure and they’ll prevail for their first road win of the season, 28-24.