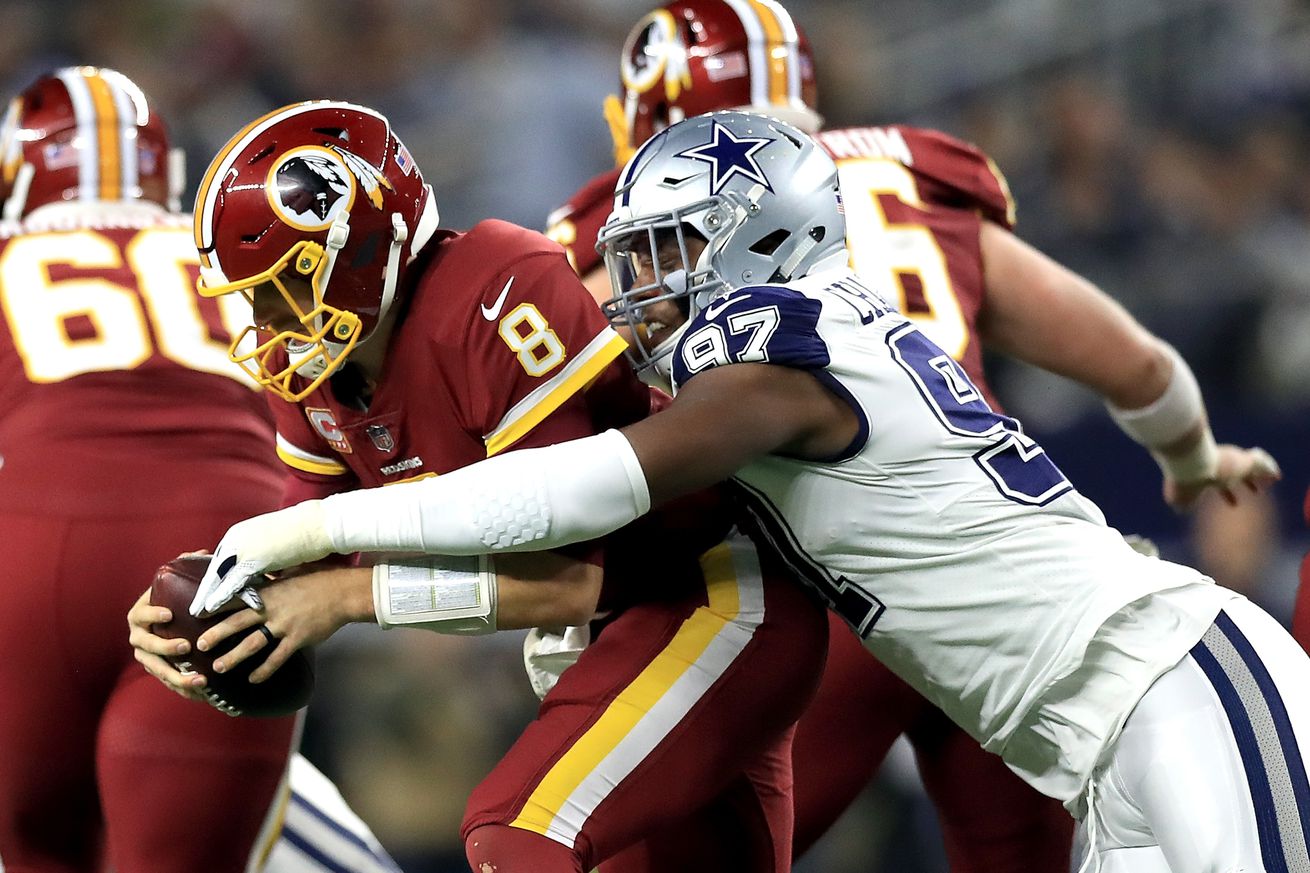 Outside of DeMarcus Lawrence, the pass rush is nonexistent. Taco Charlton needs to help pick up the pace.

With the 28th overall pick in the 2017 NFL Draft, the Dallas Cowboys select… Taco Charlton, defensive end, University of Michigan. There were many boo’s coming from the Philadelphia Museum of Arts after the pick was announced. Some of that is due to the draft being held in Filthadelphia, and part of it was due to the fact that a lot of Cowboys fans weren’t huge fans of the pick.

Through a season and a half of the Taco Charlton experience, there has been little to be excited about. So far in his career, Charlton has recorded four sacks, nine QB hits, and just seven tackles for loss in seven starts. Charlton finished his rookie season on a high-note and left Cowboys fans feeling good about his development moving forward. When training camp kicked off just four months ago, Charlton was showing signs of making strides as one of the teams best pass rushers, instead he has fallen off the map through nine weeks of the Cowboys season.

To make matters worse for the former Michigan edge rusher, Charlton’s production has regressed heavily from the start of the season to now. In the first two games of the season, Charlton had recorded a sack, two tackles for loss, two QB hits, and a fumble recovery. Since week two, Charlton has recorded zero sacks, zero QB hits, and just two tackles for loss (week four & week six). This is coming with the second-year pass rusher playing the fourth-most snaps among all defensive lineman on the team, and the second most snaps among the defensive ends on the roster.

Taco’s lack of production has not gone unnoticed which is something we should all give credit to Rod Marinelli for noticing. In weeks one through five, Charlton was playing in more than 50% of the defensive snaps, in weeks six through eight, Charlton has played in 50% or less of the defensive snaps, with Dorance Armstrong taking on a larger role in the defense. The lack of production from the defensive end unit (outside of Lawrence), is part of the reason that the defense has struggled to sack the quarterback in the last few weeks, after an extremely hot start.

Taco’s lack of a plan when rushing the passer is one of his biggest weaknesses. In preseason and in 2017, we saw him use a spin move on a lot of his rushes, while it wasn’t the cleanest spin move in the NFL, he started to figure it out towards the end of the season. Here he allows Taylor Lewan to take away his length by allowing Lewan to get inside his breastplate due to a missed hand swipe. Once Taco misses with his initial jab, Lewan is able to gain control of Charlton’s hands, and upper body and drives him straight into the ground.

First off, before we get to Taco I have no idea how you miss this hold on Leighton Vander Esch. Charlton has to set the edge here with Jaylon Smith lined up next to him on the line of scrimmage. Smith is expecting Charlton to fill his gap and plug the hole that Lewis runs through. Charlton again ends up on the ground and is in no position to make a play on the ball carrier.

As you can see, Taco Charlton starts the play clearly in the picture. Washington runs this football right at Taco Charlton and before Adrian Peterson touches the football, Charlton is completely out of the picture and nowhere close to the ball. The most concerning thing about this play is that Taco shows no awareness on this play. Out of the offensive formation, either Peterson is coming right at you, Alex Smith is pulling this and taking it off the right edge, or throwing an RPO and getting the football out quick. Rushing wide and up the field is a recipe for disaster against this look.

Charlton has time to turn it around, and the Cowboys are by no means giving up on the second-year pass rusher, but it seems as if they are starting to play the more consistent player instead of playing the guy with the higher draft status. Charlton isn’t the fastest or strongest defensive end on the field, so he needs to work on playing smarter, and developing more of a plan. He needs to learn how to use his hands better to win his battles. Until that happens, he will struggle to play with any kind of consistency.