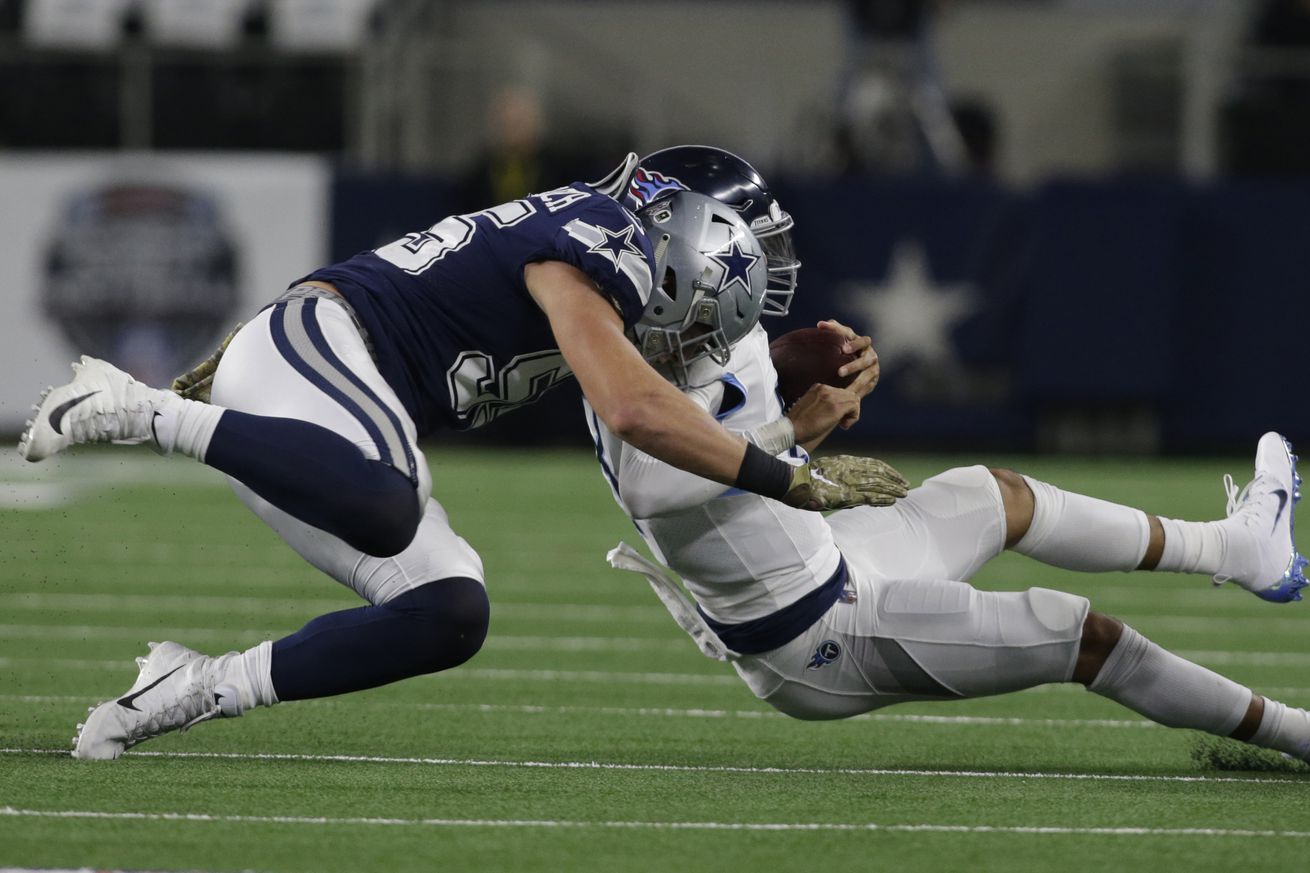 Checking on the Cowboys rookies.

The Dallas Cowboys had a golden opportunity to come out of the bye and get a much-needed win, and in the process get their season back on track as the NFC East is up for grabs. The addition of Amari Cooper was supposed to be the move that sparked this team for the remainder of the season en route to a playoff run.

Alas, here we are: the Cowboys travel to Philadelphia for a divisional battle with the Eagles on Sunday Night Football, and the excitement around this team is all but gone. Can Dallas surprise us all and get a win? Not likely, but stranger things have happened.

With all of that said, let’s take a look at how the rookies performed on the Monday night stage versus the Tennessee Titans.

LVE has been one of the biggest bright spots of the entire team this season, as the first-rounder has out-performed many of the expectations that were set prior to his debut season on the professional level. His 6-foot-4 and 256-pound frame, along with his killer neck brace, makes him look like a prototypical linebacker as he flies all over the field.

Monday was not the rookie’s best game, but Vander Esch still gave the defense nine total tackles on the night, which led the team in the loss to Tennessee. The Boise State Broncos product has a unique ability to bring down ball carriers once he gets his hands on the jersey. In this game, though, he had a few bad angles and missed tackles.

Bigger news for the rookie is that All-Pro linebacker Sean Lee once again aggravated his hamstring in the loss, putting him on the sideline for at least the next month, if not longer. With The General not on the field, Vander Esch has an even bigger responsibility. He played well in Lee’s absence earlier this season — is he up for the challenge again?

Whereas LVE has exceeded expectations, Connor Williams has, for the most part, seemingly failed to meet the hype that he received when he was selected in the second-round. Many fans were hoping that the former Texas Longhorns tackle would be a plug-and-play draft pick for the Cowboys at guard, but that has not happened.

To be fair, Williams has had some bright moments — his athleticism has been evident in certain moments, and he has contributed as a run-blocker for Ezekiel Elliott. There is also an adjustment period for rookies, especially for those along the offensive line. It doesn’t help that Travis Frederick isn’t there to help him out, either.

This past week, Williams was tasked with protecting Dak Prescott and opening lanes for Zeke against a formidable defensive line. The rookie had his struggles in the pivotal game, but that was not the worst thing for Williams:

Jason Garrett confirms that Connor Williams is getting a knee scope, but the Cowboys are hopeful it’s a short-term injury.

The rook will be out — and he won’t have to face the task of blocking the likes of Fletcher Cox until a later date.

Michael Gallup was drafted to bring explosiveness to this Cowboys offense and give Dak Prescott a legit target with some WR1 potential. Gallup had showed promise, especially in the game versus Washington, but Dallas ultimately made the move to trade for Amari Cooper.

The deal gave the Cowboys a good-looking top-3 receiver corps — at least on paper, as the trio of Gallup, Cooper, and Cole Beasley looked to make noise. Would Gallup be able to carry over the momentum that he built prior to the bye week, now with another receiver that would take attention away from him?

The rookie turned in a solid game for the Cowboys: three grabs for 51 yards and a 17 yards-per-catch average, including a long of 21 yards. The young receiver has the makings of becoming a reliable playmaker for this offense, which has to be exciting if you are a Cowboys fan.

In my opinion, Dorance Armstrong Jr. has been right there with Mike Gallup and just behind Leighton Vander Esch as far as rookies performances go to this point this season. The fourth-rounder has come on strong while quietly becoming a rotational player for Rod Marinelli’s defensive line.

Armstrong has not been a player to blow up the stat-sheet or anything so far, but the Kansas Jayhawks product and Houston native has been a solid contributor from the edge this season. In fact, Monday was Armstrong’s productive game — at least from a pure numbers aspect: two total tackles to go along with a half-sack.

Look for Armstrong to continue becoming a solid player along the defensive front for the Cowboys — especially with all of the questions regarding Randy Gregory and Taco Charlton.

The Cowboys need a tight end — that is no secret. Geoff Swaim has had a pretty solid season, but there is skepticism about him being the long-term answer at TE for Dallas.

Dallas spent a draft pick on Stanford Cardinal tight end Dalton Schultz this past draft in hopes of developing a future replacement for Jason Witten. Over the first half of the season, Schultz rarely saw the field. His only statistic recorded going into the bye? One catch for 12 yards — in the game right before the bye week.

With Swaim sidelined, Monday was Schultz’s opportunity to take advantage of a very big opportunity. Instead, Schultz did not make the box score. Some of that may have to do with the offense, with Dak Prescott’s struggles, and everything of that nature, but Schultz certainly missed a big opportunity to show that he could be the future — and maybe the present — at the position. It wasn’t even his lack of catches, either. Schultz struggled as a blocker as well, as Owning points out:

Kamalei Correa is able to best blocks from Dalton Schultz and Tyron Smith to blow up another Zeke counter play. I was really disappointed with Dalton Schultz’s performance against TEN. He didn’t take advantage of his increased snaps with Swaim out. #Hockenson2019 pic.twitter.com/H9swa6FrYH

Will the rookie begin to improve as Swaim continues to be on the sideline? We will see.