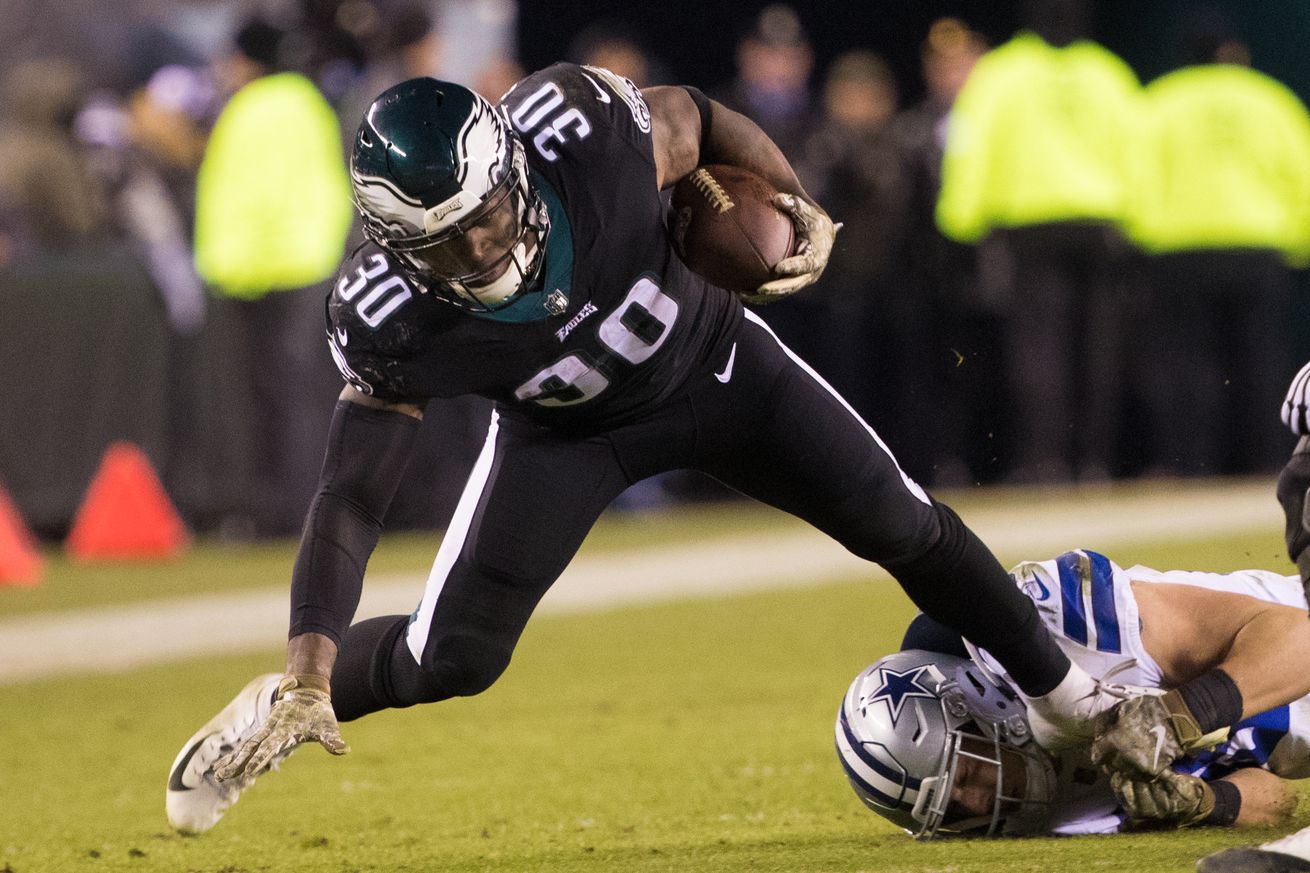 After a couple of weeks off because the issues were so depressing, we return to seek insight from numerology (or something).

Mea culpa. I took a break from these dives into the stat sheet because, after the last two losses by the Dallas Cowboys, the issues at hand seemed to deal much more with things going on with the coaching staff than anything we could learn from the game numbers. However, the gratifying 27-20 win over the Philadelphia Eagles offers some interesting things to study. So let’s take a look.

This was a very favorable number for the Cowboys in both directions. First, Dallas converted 8 of 16 third downs, for a nice, even 50% rate. More importantly, this may be more than just a outlier as something notable has happened. I’ll turn to Bob Sturm of The Athletic for a nice summation.

It has only been two games, but the team once ranked 29th has shot up to ninth-best in the Cooper Era, converting 48% of third downs (13 for 27) all of the sudden — including 8 for 16 (50%) in Philadelphia. A 6-for-19 showing on third-and-4+ won’t set the world on fire, but it does elevate them over teams like New England, Green Bay, and Carolina, up to 19th in the NFL. These stats can and do fluctuate, but the Cowboys had to do something about their offense’s inability to sustain drives — thus neutering the value of a running game — and they did. The price was high, but the purchase sure helps.

He is of course referring to Amari Cooper, and the way his addition during the bye has helped the offense in multiple ways. Add in the successful fourth-down conversion on the fake punt/direct snap to Jeff Heath, and the Cowboys were just difficult for the Eagles to stop. Third-down efficiency is one of the most important performance indicators in the NFL, so this is pretty big.

Here is a nice chart from Michael Strawn (charts being his thing) to better illustrate this point.

Just as important for the outcome of the game was the way the Dallas defense limited the Eagles on their third downs. They only converted four of ten for 40%, and failed on both their fourth down attempts. What that raw percentage (which is near the league average) does not show is that the Eagles did not convert a third down until the third quarter, going 0 for 5 to that point. That kept Philadelphia from managing more than a field goal to that point, which turned out to be crucial in putting the Cowboys in position to win.

No, this is not referring to the ridiculous fact that the Eagles did not draw a single flag all game, despite the broadcast crew demonstrating at length how Jason Kelce was an ineligible player downfield on one play, and this unintentional reveal.

While the lack of flags thrown against the home team was certainly a bit, shall we say, peculiar, zero also is the number of penalties drawn by the Cowboys offensive line.

That is more significant than you might realize at first.

Just remember all the drives that were killed by penalties drawn by offensive linemen in the games lost by Dallas this season, with the resulting lost opportunities. Then add in that this game was played with one backup, Xavier Su’a-Filo, taking all 69 offensive snaps in his first game action since joining the team, and the team’s other backup guard, Adam Redmond, had to play 13 snaps while Zack Martin was getting checked out for his knee injury. The ability to go a whole game without a single infraction called by an officiating crew that may or may not have been involved in some home cooking seems quite remarkable. Meanwhile, Tyron Smith may have had his best game of the season, shutting down pass rushers and throwing not one, but two blocks on the Michael Gallup screen pass that led to Dallas’ first touchdown. Oh, and Ezekiel Elliott’s 151 yards on the ground also ties directly into the strong performance by the offensive line.

We can’t be completely sure, but it is certainly logical to believe that this is a direct result of the ascension of Marc Colombo to offensive line coach and the addition of Hudson Houck as, well, call him special mentor. Despite being banged up, the line won far more than they lost against the Philly front seven. That is a noticeable change from the first half of the season.

On a related note, while the Cowboys did draw five flags during the game, the last one came with 8:11 to go in the second quarter. It was like the refs decided to just let the game play out from that point and kinda ignore everything. It does seem odd, but hey, it all worked out.

This ties into the “Cooper era” Sturm mentioned above. Here are the snap count percentages, targets, catches, and yards for the wide receivers.

It’s pretty clear that the WR group is now the big 3 plus 1, with Cooper, Gallup, and Beasley on the field for the majority of the snaps, while Hurns does spot relief duty and comes on for four wide receiver packages. Brown has, to date, been used almost exclusively on running downs, and given that he drew two different holding penalties (including one that wiped an 11 yard Zeke run off the books), that may be a disappearing role.

While we can lament the failure of the Cowboys to have a functional wide receiver corps at the start of the season, the acquisition of Cooper may just be a case of falling into, um, something stinky and coming out smelling like roses.

It is not unusual to see up to six players on the field for every offensive snap, namely the quarterback and the starting linemen. But, at least in Dallas’ case, that is a lot less common on the defense. In the past, Sean Lee would occasionally do that, and one or two defensive backs would.

But due to injury situations and perhaps other considerations, there were five defenders who were on the field for 100% of the defensive plays (the same number as for the offense, due to Zack Martin’s injury scare). They were Jeff Heath, Byron Jones, Xavier Woods, Leighton Vander Esch, and Jaylon Smith. The three secondary members is not a real surprise, but the linebacking duo is something new – and a testament to just how strong that pair is. Both LVE and Smith were the cause for a lot of criticism when they were drafted, but this season, they are both paying off handsomely. And that is not just homer talk.

If Jaylon Smith and Leighton Vander Esch continue to improve you could be talking about one of the best future LB duos in the league. #DALvsPHI #SalutetoService

There won’t be any complaints when Sean Lee is healthy and starts taking some snaps. But this is such a stark change from past seasons when Lee’s absence led directly to a huge degradation of the defense.

And while he has some stiff competition, LVE is making quite a case for Defensive Rookie of the Year. He certainly added more to the argument in this game, putting up a team leading 13 tackles, an interception, and a tackle for a loss that likely stopped a late game-tying drive by Philadelphia.

That is the stat line for Golden Tate. He also had one carry for zero yards on the very last play of the game when Zach Ertz lateraled the ball to him in a failed attempt to score.

This is noted because so much was made about how Tate was a real Cowboys killer, nearly unstoppable when he played them. His signing by the Eagles was compared to Dallas’ trade to get Cooper. Yet while the Cowboys got Cooper involved in his very first game, the vaunted Eagles staff (well, vaunted before this season, anyway) was unable to find a way to utilize Tate. He only saw the field for 18 snaps and clearly had no impact on the game whatsoever. It was more due to the decision to not involve him by his own coaches than anything, but it still was good to not see him do much of anything.

Perhaps he will be more of a factor when the Eagles come to Dallas on December 9th – but it is probably more important to figure out how to control Ertz, who caught the ball on 14 of Carson Wentz’s 32 completions.

Is that petty? Don’t care.