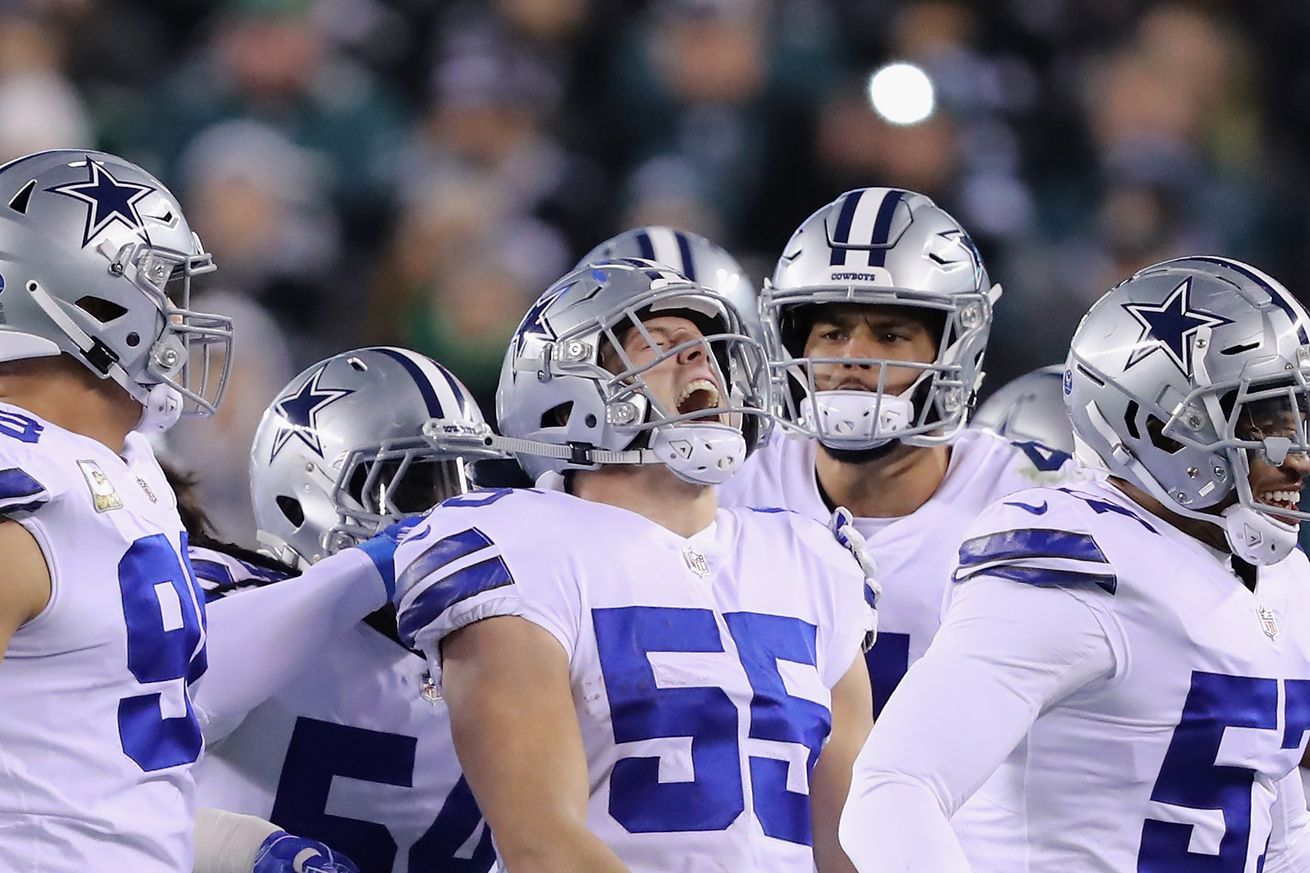 All your news is here… dig in.

Leighton Vander Esch has almost become his own folk hero with how impressive his rookie campaign has been. He took it to new heights on Sunday with his first career interception and one of the most important plays of the game on a shoestring tackle. As it turns out, LVE also set some history for the Cowboys.

According to #Cowboys coaches tape, rookie LB Leighton Vander Esch had 19 tackles vs #Eagles, most in single game by any Dallas player in history. Despite starting just four games, LVE leads team with 96 tackles – no rookie has ever finished season as #Cowboys tackle leader.

As already noted, Leighton Vander Esch was incredible against the Eagles. Not to be overshadowed, Ezekiel Elliott also had himself a game Sunday night. Now, both of these players are up for weekly awards from the NFL that you can vote on.

Elliott is up for FedEx Ground Player of the Week after rushing for 151 yards and a touchdown, his second-best total of the season.

Vander Esch is up for Pepsi NFL Rookie of the Week after making a game-high 19 tackles, according to coaches film — the most ever by a Cowboys rookie linebacker in a single game — and his first career interception. He also had a critical tackle for a five-yard loss in the fourth quarter that helped lead to an Eagles punt.

After the much-needed win over the Eagles, the Cowboys now head to Atlanta to try and make a win streak out of it. The Falcons are 4-5 just like Dallas, and are coming off an embarrassing loss to Cleveland. What are the odds the Cowboys can get a win?

Atlanta is the early favorite heading into the game, being favored -3 by Bovada. The Falcons are 3-6 on the year against the spread, while the Cowboys are 4-5. According to PreGame.com, the Falcons started off as 4.5-point favorites and the majority of the action has been for the Cowboys.

Dallas’ money line for a heads-up victory is currently paying out +155.

The over-under on the game is set to 48 points.

When Zack Martin went down on the ground early in Sunday night’s game, the hearts of most fans skipped a beat. Even though he had to go back to the locker room, Martin returned to the game and finished it out. He intends to continue playing going into next week, as well.

Owner Jerry Jones noted on his Tuesday interview with 105.3FM the Fan the expectation is Martin will play, but there’s something to be said about hearing it directly from the gladiator’s mouth.

”It’s just something I’ll kind of have to deal with,” Martin told David Helman of DallasCowboys.com. “It’s nothing serious, it’s kind of one of those little nagging things you’ve got to keep an eye on and keep treating through the rest of the season. …I was pretty sure that I just re-aggravated what I did a couple weeks ago in Washington.

”It felt similar, so I was able to come back here and get re-examined, tape it up and tighten the brace up a little bit.”

A lot of things were said about the Cowboys’ decision to trade a first-round draft pick for Amari Cooper. Jason Garrett’s justification was that Cooper would be better than any wide receiver they might have drafted in the first round with that pick. So far, Cooper has been backing up his head coach’s words with actions.

Two games into his Cowboys career, Cooper has 11 catches for 133 yards and a touchdown. He has led the Cowboys in targets and receptions in both games. With just three full practices before his debut against the Tennessee Titans last Monday night, he had five catches for 58 yards and a touchdown. With just three more practices last week, he caught six passes for 75 yards against the Philadelphia Eagles.

Ten of Cooper’s 11 catches have gone for a first down. He is already second on the team in first-down receptions, in just two games. Cole Beasley is first with 23.

Xavier Woods had a career day on Sunday – @Marcus_Mosher

Xavier Woods may not have filled up the stat sheet on Sunday night or even stuck out in a significant way to many who were watching, but the safety had a great game.

#Cowboys FS Xavier Woods was targeted three times and forced an incompletion on all three passes.

Woods’ three pass breakups tied the most for any defender this week and was the most by a safety. per @PFF

It may feel like an eternity ago at this point, but it was just a few days ago when there were rumors about Dallas potentially dumping Scott Linehan and an infatuation with Lincoln Riley, the Oklahoma Sooners head coach. On Tuesday, Jerry Jones addressed these rumblings.

“Completely false,” Jones told 105.3FM the Fan on Tuesday of the rumors. “Totally false. That was never a discussion. [It was] never a thought, on my part. That did not happen.”

And on reports of the team’s “affinity” for University of Oklahoma head coach Lincoln Riley?

“That would be total drawing it out of the air,” he said. “It’s total speculation.”

What’s the likelihood the Cowboys will sign DeMarcus Lawrence to a mega deal before next season? – Jon Machota, SportsDay Dallas

With all of the drama going on with the Cowboys on a seemingly day-to-day basis, it’s easy to forget that one of Dallas’ very best players, DeMarcus Lawrence, is playing on the franchise tag. So far, the Cowboys and Lawrence have been unable to come to terms on an extension, but how likely is it that the Tank will work things out?

At this point, I’ll say 75-percent chance that he gets a long-term deal from the Cowboys by the start of next season. He’s too important to the team to risk a Le’Veon Bell type situation. And that’s where it could go if he’s given the franchise tag for a second-consecutive season. Lawrence is one of the league’s best pass-rushers, but he’s also one of the team’s leaders and hardest workers. Not rewarding him would be a bad look for the franchise.

A lack of penalties for teams that play Dallas – @RickGosselin9

Very rarely does it happen where an NFL team plays an entire game without one single penalty. But looking at all of the times over the past 18 seasons where a team has played penalty-free football, there is one interesting trend.