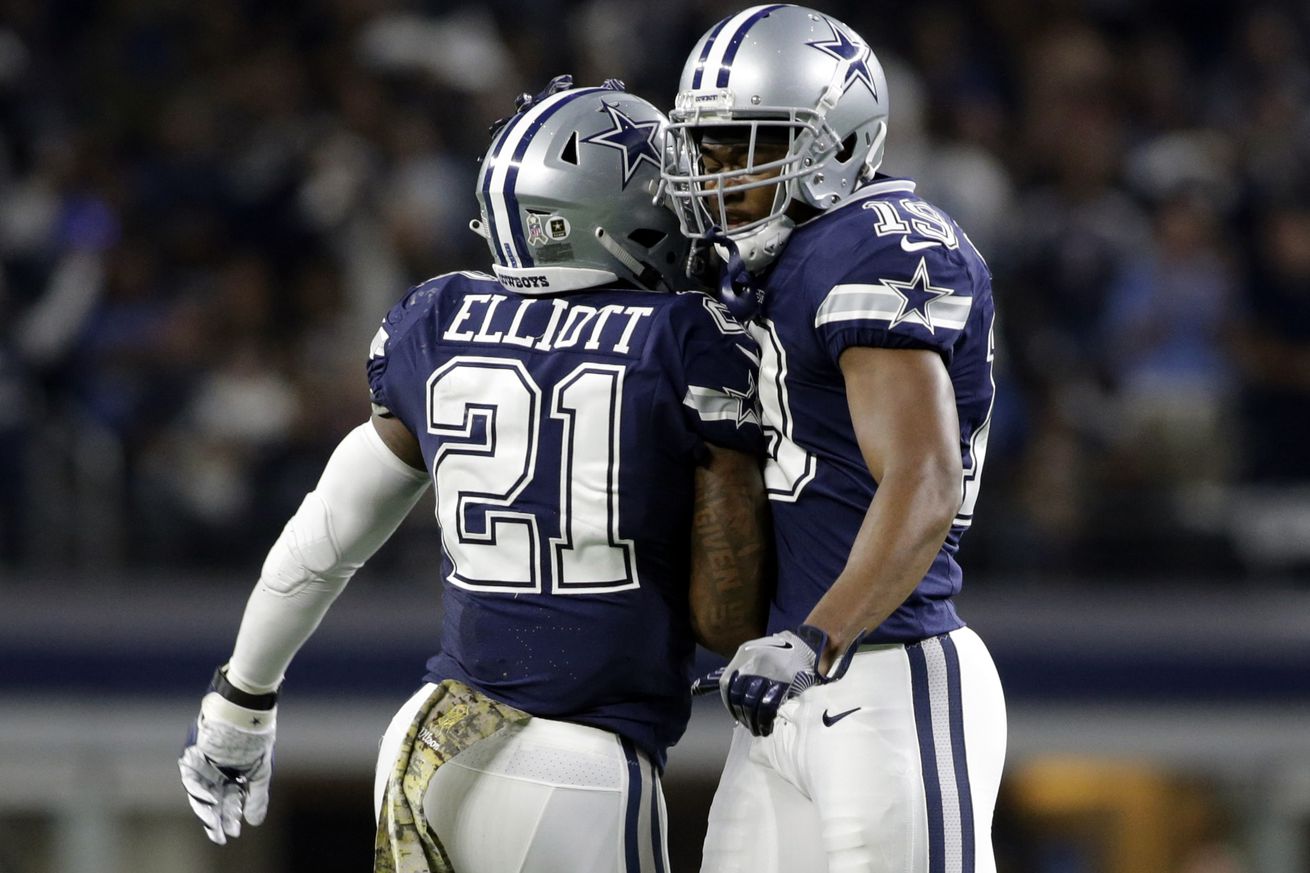 Last year’s loss in ATL was “Dak without Zeke”, now he not only has Zeke but also Amari Cooper out wide. Will it be different this time?

This is arguably the most impressive accomplishment by Cooper since he joined the Cowboys. In two games with the Cowboys, Amari Cooper already has 11 catches for 133 yards and 1 touchdown. His presence has opened up the run game for Ezekiel Elliott and helped draw coverage from other receivers as the pass game has noticeably improved.

But here’s what you need to know about Cooper and his approach off the field and how that approach affects his on-field performance. In a sideline discussion I had with WR coach Sanjay Lal before Sunday’s game in Philly, we talked about Cooper. Lal told me that Cooper in the previous week’s game versus the Titans had zero mental errors.

Dak Prescott and the Cowboys pass-catchers are already benefiting from having Amari Cooper around – RJ Ochoa-Blogging The Boys
The impact of the Cowboys trade for Amari Cooper is real for these Dallas Cowboys. Though the record is 1-1, their offense is improving, and so is Dak Prescott.

Overall Prescott has seen an increase in accuracy since Amari Cooper arrived, and it’s not hard to see why. The way that Cooper has been able to separate on a continual basis (granted we’re talking about two games here) is something that any quarterback would love to have.

Accuracy isn’t the end-all-be-all statistic in the NFL, but it can be quite telling. Consider how much more accurate Dak Prescott has been with each of his targets since Cooper arrived. That’s where the real difference has been made.

Prescott has had higher success rates with literally all of the Cowboys’ top five targets this season since Cooper arrived. Ironically, one of the lowest completion percentages “After Amari” is to Amari himself at 61.1%.

Cowboys experiencing another changing of the “Guard”?-Dave Helman -Dallas Cowboys
Standing in for rookie second-round pick Connor Williams, Xavier Su’a-Filo played so well that the Cowboys aren’t in a rush to switch back anytime soon.

I have very little doubt that Connor Williams is going to grow into a successful NFL offensive lineman. His tape to this point in the season has been far more good than bad, and starting in 2019 he’ll have a full offseason to get to work in an NFL weight program. He’s going to be fine.

Now that I’ve said that, there’s nothing wrong with admitting the obvious. With veteran Xavier Su’a-Filo taking Williams’ place last week, we saw the dominant type of Cowboys rushing attack we haven’t seen many times this season.

Cowboys All-Pro Frederick may be physically unable to perform but still expects backups to step up- Stefan Stevenson-Fort Worth Star-Telegram
Travis Frederick has been out dealing with a debilitating disease but he doesn’t want pity, he wants the guys who can play to step up and perform.

Center Travis Frederick, who has been out the entire season while recovering from Guillain-Barré syndrome, knows the O-line faces a similar tasks with his absence, and the potential that left guard Connor Williams will miss a second consecutive game because of injury. Smith missed Wednesday’s practice with a sore back and right guard Zack Martin is still nursing a sprained knee and did not practice. Williams, who injured his knee two weeks ago against the Titans, was limited.

“There’s a reason the people that start, start,” said Frederick, who is acting as something of an assistant offensive line coach while he recovers. “You win the competition for the job so you want those people in. The next person needs to step up. Luckily, Xavier [Su’a-Filo] did a great job of stepping up. No matter what the situation is you have to make the best of it. That’s the goal when you don’t have the people you’re supposed to have in there you just have to continue to perform.”

“It’s a results oriented league. You don’t have time to say, ‘This game doesn’t count because we didn’t have all of our guys,’” he said. “You just have to be your best no matter what.”

Leighton Vander Esch validating Cowboys’ investment of first-round pick – Todd Archer- ESP
The Cowboys were criticized for picking the former Boise State linebacker but he’s been a huge reason for the success this team has had on defense.

Despite playing only 399 of 578 defensive snaps in nine games — and just four starts — the coaches have Vander Esch down for 96 tackles, and he almost assuredly will break the team record for tackles in a season by a rookie, set by Dexter Coakley, who had 136 in 1997.

“He’s the best tackler on the team,” Smith said of Vander Esch. “He’s a helluva guy. He’s a sponge, soaking everything in. He learns so much from [Sean Lee] and myself, and he’s going to be around for a long time.”

Leighton Vander Esch is making Cowboys fans forget about who they didn’t pick- Kate Hairopoulos- SportsDay
The Cowboys rookie linebacker is playing way beyond expectations and won the NFC’s Defensive Player of the Week for his efforts in Philadelphia.

Cowboys rookie Leighton Vander Esch kept getting congratulated Wednesday, but he wasn’t sure why. Then the linebacker checked his phone, he said, where he had a message from his agent telling him he’d been selected NFC defensive player of the week.

The honor resulted from a standout effort in the win over Philadelphia, when he made his first career interception in the first quarter and made a game-saving tackle for a loss, snagging the Eagles running back by the shoe, late in the fourth quarter. He’s officially credited with 13 tackles for the game, though the Dallas coaching staff scored him with 19, a franchise rookie record.

Ezekiel Elliott has chance to make amends for his role in ‘the burning of Atlanta’ last year – Clarence Hill- Fort Worth Star-Telegram
In last year’s devastating season-altering loss to Atlanta, it coincided with the the first game of Ezekiel Elliott’s six-game suspension. Zeke is hoping to make amends by making a big impact.

They revived their hopes with a victory against the Philadelphia Eagles last week. But it would mean little in the grand scheme of things if they can’t build on it with a win against the Falcons, getting them back to .500 with an NFC East showdown against the division-leading Washington Redskins (6-3) four days later on Thanksgiving Day.

“I was at home watching it,” Elliott said when asked for his memories of last year’s game. “It was tough to watch, a tough time for me. I am out here this year and able to help my guys go out there and try to get that win.”

Zeke: Too soon to say we’ve turned a corner, need much more than one road win- David Helman- Dallas Cowboys
Zeke Elliott wasn’t ready to say the Cowboys are so improved after one win in Philadelphia. He knows that this team needs to focus on consistency.

Elliott struggled to get going two weeks ago against Tennessee, finishing with just 61 rushing yards, and he was stymied by Washington and Houston in weeks past. It’s got to be encouraging to rack up eight yards per carry on the NFL’s second-best rushing offense, though.

And looking at an Atlanta defense that’s surrendering 120 yards per game on the ground can only serve as further encouragement.

Collins and Woods both played more than 60 percent of the snaps against Philadelphia. If either can’t play against the Falcons, the depth on the interior line will be tested.

Dallas might not be able to use Tyrone Crawford outside as much to ease the load on DeMarcus Lawrence and Randy Gregory. Lawrence, who has battled shoulder issues this season and has a history of back trouble, played a season-high 90 percent of the snaps against the Eagles.