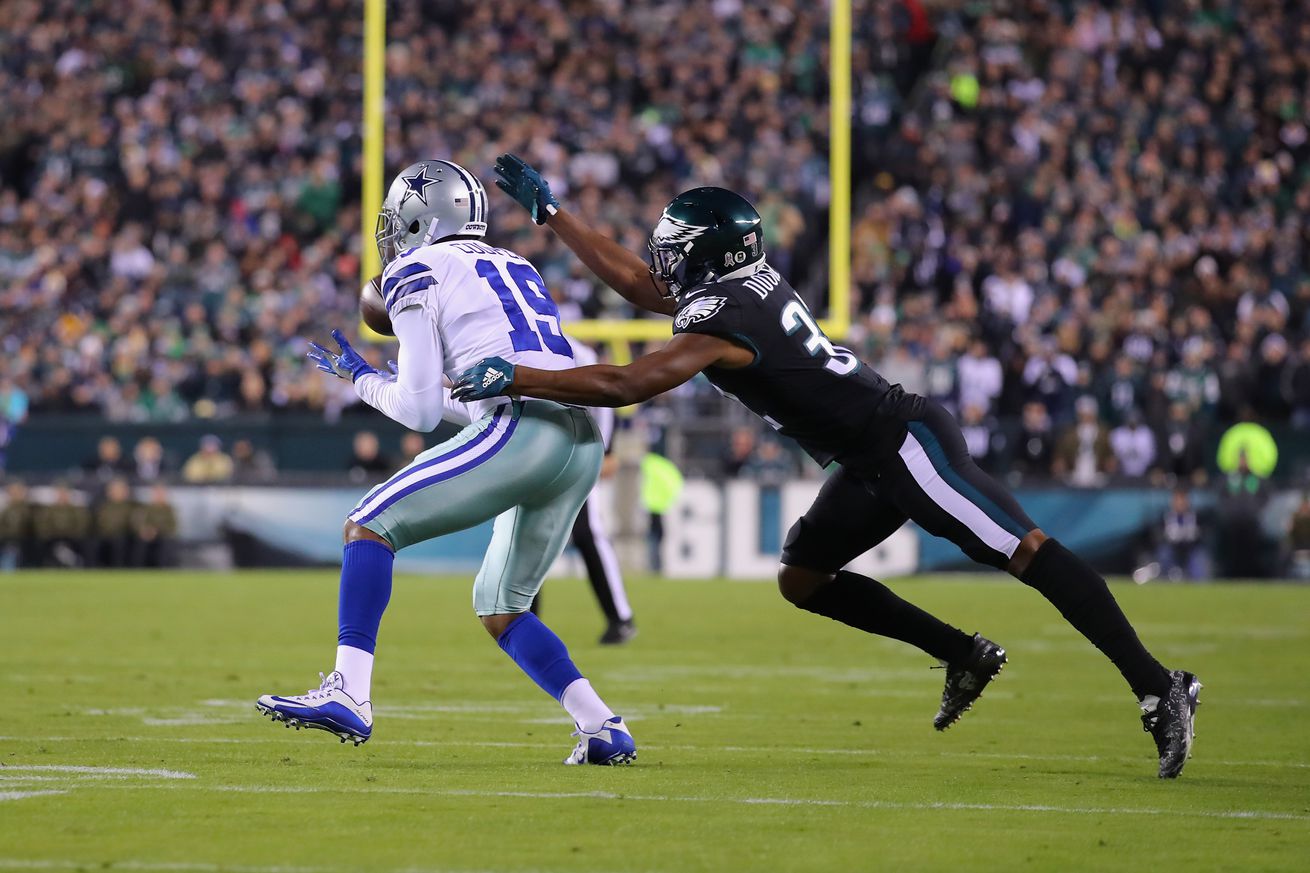 Through two weeks of the Amari Cooper experience, the Cowboys couldn’t look any smarter.

It has been almost a month since the Cowboys traded a first-round pick to the Oakland Raiders for wide receiver Amari Cooper. The early returns are making the Cowboys front office officials look good. Through two games with the Cowboys, Cooper has hauled in 11 receptions on 18 targets, for 133 yards, and a touchdown. 10 of 11 of Cooper’s receptions have gone for first downs since joining the team two weeks ago, and the teams overall third-down conversion rate has skyrocketed. Not only has Cooper put up decent stats, but the tape is even better. Today we’ll take a look at Cooper’s All-22 tape from weeks nine and ten.

Slants, posts, and working the middle of the field

Cooper is so successful at eating up the middle of the field for multiple reasons. Opposing defensive backs are not able to zone in on the middle of the field due to Cooper’s vertical ability, and his ability to run double moves/sluggos so well. Here you’ll see the DB sell out vertically by opening his hips and shifting his weight to his inside leg. When Cooper makes his move to the inside, the DB is in no position to play the inside route, and completely whifs. This is a beautiful route from Amari Cooper that turned Ronald Darby around.

The slant route is a route that isn’t all that hard to run. It involves receivers selling vertically, and then making a crisp cut. Cooper has great nuance in his route-running that makes him very successful at running even the simplest of routes. He starts by giving a shake at the line to avoid any chance of a jam because the DB is playing up. Then, Cooper keeps his eyes forward with his arms pumping to sell the vertical route, at his breakpoint Cooper gets wide with his outside foot which allows the inside foot to plant and break quickly with zero wasted movement. From that ends up with about five yards of separation and is able to pivot back and get some yards after the catch.

Here is yet another example of Cooper winning with his inside release. Cooper sets all of these routes up by selling the vertical route with his gather off the line of scrimmage. Getting the defensive back top open his hips towards to pylon allows Cooper so much room on the inside for separation. With as good as Cooper is at running the slant, expect that route to be used a lot more in the offense now that they have a reliable weapon to run it with.

This is one of my favorite plays from the entire season. Third down and six backed up close to their own endzone. If you’ve been watching Cowboys football this year you know how bad they have been on third down. Dak has no one open past the chains so decided to dump it off to Amari Cooper two yards short of the chains. Cooper absorbs a monster hit, bounces off Darby and picks up the first down. These are plays that true WR1’s make, and plays the Cowboys need Amari to continue to make if they want any chance of competing for a playoff berth.

Here is another perfectly executed slant from Cooper and the yards he picks up after the catch is something that shouldn’t go unnoticed. His ability to create as much separation as he does on these slants allows him great opportunity for yards after the catch. When your offense has struggled as much as the Cowboys this season, every yard counts, and Amari does an excellent job of catching the ball, getting up field, and creating yards that are not always there for the taking.

Getting vertical and creating explosive plays

If for some reason you started this clip at the end, you’d probably assume that the Eagles were in zone coverage, and Amari Cooper found a soft spot in that zone. But no, Amari Cooper just beat Rasul Douglas so bad that Douglas practically gives up chasing him down. This is a beautiful route from Cooper that makes Douglas look like a Pop Warner cornerback.

Another beautiful release off the line of scrimmage for Cooper. Cooper sells the slant with the inside pivot, then gives Douglas an inside arm swim move to avoid contact with the defensive back. This is one Dak Prescott would love to have back because Cooper has his man beat easily. Cooper does such a good job of setting his opponents up with his feet, hands, eyes, then completely going a different direction. He also gets very clean releases through his technique at the line of scrimmage.

Here Cooper sells the post route by getting his head and shoulders turned to the goal post. One the DB opens his hips to drive towards the goal post, Cooper sinks his hips and breaks it back towards the sideline for an easy gain of 13 yards on second and eight. This is a deeper version of the route that Cooper scored on against Tennessee, and one he seems to have a good feel for.

Since Cooper joined the Cowboys, they have improved on third down, in the red zone, and running the football. Not only has Amari Cooper helped Dak Prescott, but it seems as if the other receivers have gotten more opportunities to make plays in the last two weeks. It’s still early, but all signs point to the Cowboys making a smart move by trading for the 24-year-old wide receiver.