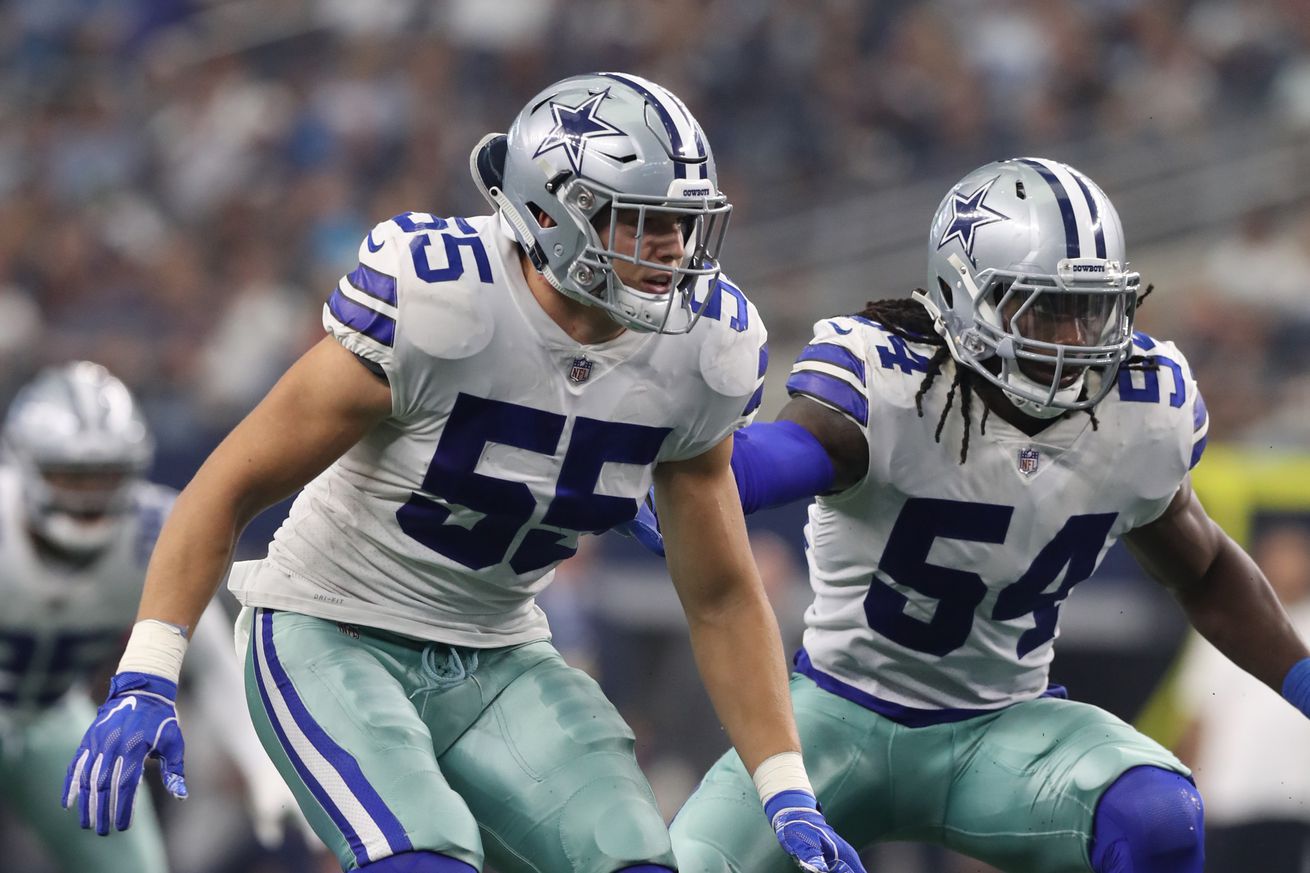 The wolfbacker and the swiper have been a revelation, so why aren’t we talking about their coach?

The surprisingly good performance of the Dallas Cowboys offensive line against the formidable front seven of the Philadelphia Eagles has brought a lot of praise for the job done by new offensive line coach Marc Colombo (feat. Hudson Houck). But there has also been another unit on the team that has performed even better than expected this season. Maybe it’s because the development took a few games. Or that there was so much else going on with the team. For whatever reason, no one is talking about what new linebackers coach Ben Bloom has done this season, especially with Sean Lee missing so many games. All he has managed is to produce what may become the best linebacking duo in the NFL in Leighton Vander Esch and Jaylon Smith.

Oh, sure, it certainly helps to have such superlative athletes to work with, but that ignores just what they were dealing with.

Vander Esch came to the Cowboys with an incredibly slim résumé, save for his breakout junior season at Boise State. He won Mountain West Defensive Player of the Year with that incredible performance, but prior to that, he had only played as a backup as a freshman, and then only played in six games as a sophomore while dealing with a neck injury. Before that, he played eight-man football in rural Idaho. One of the biggest reasons so many were skeptical of Dallas taking him with the nineteenth overall pick in this year’s draft was that he was expected to be so raw, with so much to learn.

If his performance so far this season is that of a player still learning his position, his future should strike absolute terror into the league. He is both exceptionally big and remarkably fast for his position. And he has already displayed a grasp of the game that surpasses many veterans. His recent selection as the NFL Defensive Player of the Week, and subsequent addition to the Pro Bowl ballot, are testament to how people have taken notice of him. Going into this week’s Atlanta Falcons game, he is tenth in tackles – and was not starting until after Lee was injured in week four of the season.

That kind of emergence doesn’t happen without some solid coaching, no matter what tools a player brings to the table. Bloom has to get a lot of credit for bringing LVE along so well. Last season showed just how badly the defense could perform without Lee, and the decision to take him in the first round is paying big dividends as the defense hasn’t missed a beat this year without Lee.

Smith’s saga is well know to Cowboys fans. Many thought he would never play in the NFL after the massive injury he suffered in his last college game. And if you think people were critical of LVE’s selection, they were absolutely derisive of using a second-round pick on Smith, who then had to sit out his entire rookie season. He saw the field last year, but was clearly not back to the level of play he showed at Notre Dame.

Now, however, he is starting to look like that phenomenal force he was in college – and is still believed to be regaining strength and mobility. Given how well he has played so far (he is 20th in tackles), that should also be creating a bit of trepidation for NFL offenses, particularly for the NFC East teams that have to face him and LVE twice a season.

It is arguable that Bloom has done the best job of any coach on the Dallas staff. Now, he hasn’t had to do it alone. Kris Richard also has a lot of responsibility for the linebackers in his role as passing game coordinator, but he doesn’t spend that much time working on technique and assignments with them. More valuable for bringing the younger players along is the man who made LVE such a necessity, Sean Lee. Lee has always been a great athlete when healthy, but it was always his understanding of the game and how to line up himself and those around him that set him apart.

And now, in much the same way Travis Frederick is helping Colombo, Lee is serving as an extra coach for the linebackers. He is a consummate team player, and is fully invested in helping Vander Esch and Smith reach their full potential. It speaks volumes about him that he is seen to be working so hard to train his eventual replacement, which is not really something you see that often.

But none of that subtracts from what Bloom has done. Replacing the respected Matt Eberflus, at least in the linebacking part of his job, was seen as a big set of shoes to fill. Bloom has not only filled them, he has excelled, at least in terms of the product on the field.

That is really all that matters. He has been overlooked this year. So give him his due.