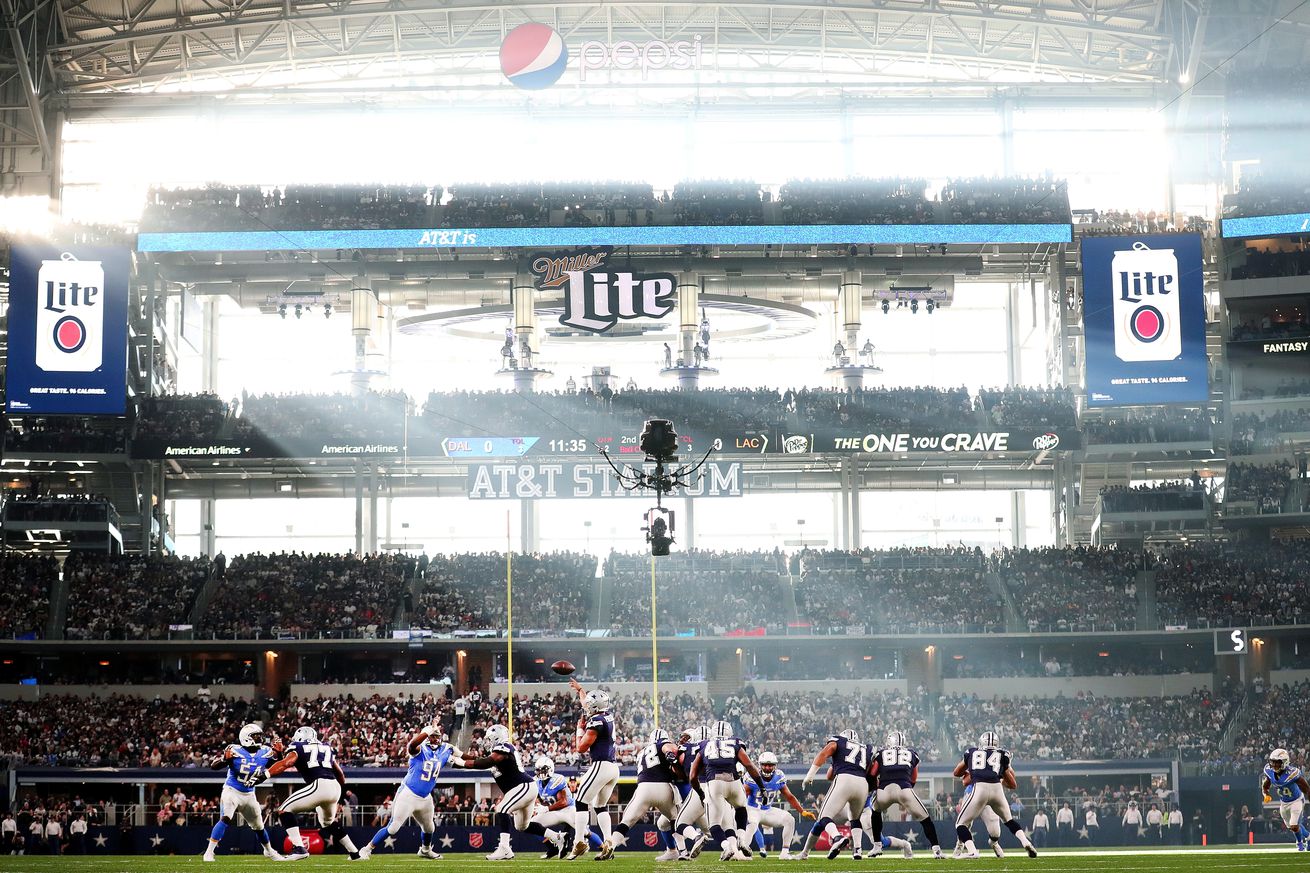 Hope you all have a great day, and that we see a Dallas win!

It’s Thanksgiving, which means family, food, and Dallas Cowboys football! Here are your news links to whet your appetite.

Scout’s Eye: Handling Washington’s Front 7 – Bryan Broaddus, DallasCowboys.com
A lot of attention has been on the banged-up Washington offensive line against the Cowboys’ defensive front seven, Broaddus sees the big key for Dallas to be handling the opposing defense.

Where the Cowboys have had some success during this two-game winning streak is that they’ve been able to get Elliott going with the ball in his hands. It will be a key for them to create some running lanes for him in order to get the offense going. As a unit, they feed off his ability to gash opponents.

The plan is pretty simple for the Cowboys: block the Redskins’ front seven and offensively they will be able to finish enough drives to win this game.

Final Thoughts: Trying Hard To Get Healthy – Bryan Broaddus, DallasCowboys.com
Let’s get a two-fer from Broaddus.

I don’t expect the offensive game plan to change at all for the Redskins. Colt McCoy is very capable of doing everything that Alex Smith does. The only difference is that we might not see those big shots down the field. McCoy doesn’t have the same arm strength as Smith, which was evident when the Redskins tried to rally last week in the final minutes against the Texans. Where Rod Marinelli and Kris Richard do have to worry is with McCoy using his legs to convert third downs. He is more likely to take off when the pocket breaks down.

“Well, I think I’m going to go back to Emmitt Smith, Michael Irvin. Emmitt had a lot of his runs where he wasn’t touched for the first three or four yards,” Jones said. “It’s because [Troy] Aikman and Irvin had them backed off, and they knew if they didn’t stay back then Aikman, Irvin and [Jay] Novacek would take them right down the field. Well, Cooper has done that for us. We got to keep them back off. When we do, then Zeke can basically have the kind of days we want him to have as a running back. So it’s a balance thing — it always has been.”

Cooper’s presence certainly aided Zeke. Elliott leads the NFL with 111.3 rushing yards per game and 166.7 scrimmage yards per game since Week 8, after the Cowboys traded for Cooper during their bye week.

Amari Cooper was still with the Raiders the last time Dallas played Washington. At that time, Redskins safety Ha Ha Clinton-Dix was still in Green Bay.

The two last played against each other during Cooper’s rookie season. Cooper caught six passes for 120 yards and two touchdowns in a 30-20 Packers win at Oakland.

In three games with Dallas, Cooper has caught 14 passes for 169 yards and one touchdown.

“He’s an elite receiver,” Clinton-Dix told Washington reporters. “He has a chance to be great. He’s very fast. He’s explosive. He’s a guy we have to stop and take the ball away from.”

Dallas Cowboys: A lighter Ezekiel Elliott carrying bigger load | Clarence Hill, Jr., Fort Worth Star-Telegram
One big plus for Ezekiel Elliott this year is that he is in better shape. Given the way the team leans on him, that is paying off.

“I mean, if that’s what it has to be then that’s what it’s going to be,” Elliott said. “ I’m definitely not afraid of that. You know it’s one of those challenging weeks because it’s going to be a week where you don’t get a lot of physical reps. You just physically can’t go out there and get those physical reps one and two, your body is beat up from playing two days ago.

“You’ve just got to make sure you get those good mental reps and you get in that film room and just really like paying attention to those plays we’ve got cued up for this week and make sure I’m cued in on everything and ready to go.”

Elliott is ready to go because he is lighter and fresher. He admittedly came into the season in the best shape of his career, trimmer than he was in 2017, because of the expectations of having to carry a bigger load and the motivation to make up last year when he missed six games due to NFL suspension for violating the personal conduct policy.

Patrick’s POV: Cowboys must lean on trio of threats on offense | Patrick Conn, wfaa.com
Some more evidence of just how Zeke is the engine of this offense.

The Cowboys, fresh off two road wins against tough bird teams in a season where they had been winless on the road, are now just a meager one game back of division-leading Washington who seem to be spiraling out of control. On Thanksgiving, incredibly, the Cowboys will play Washington for the division lead.

The offensive line for Washington is banged up and now their quarterback Alex Smith has been lost for the season after a horrific leg injury on Sunday against Houston. Meanwhile, Dallas has won back-to-back games and are looking to pounce.

That’s the macro of the situation. In the micro, the Cowboys’ offense still isn’t where they want it to be but they are making positive strides. The team traded their first-round pick in next April’s draft for Amari Cooper and that has helped this team in a multitude of ways. Dallas has improved their 3rd down conversion rates, has seen more red-zone trips and Ezekiel Elliott has returned to dominance, especially in the last two weeks.

Dallas Cowboys vs. Washington Redskins game preview | Stefan Stevenson, Fort Worth Star-Telegram
This look at five things includes the obvious: Ezekiel Elliott is the best weapon the Cowboys have.

Let’s hope we’re not the only ones overfed on Thursday. Ezekiel Elliott is coming off two of his best games of the season and is reminding the world how valuable he can be to the offense. Prescott has used the run-pass option to greater effect the past two weeks, even if he doesn’t have the rushing yards to make it appear worthwhile. It’s more about keeping the defense unsure on later plays. That might be one reason the past two games have been Prescott’s two best in terms of completion percentage. Also, Elliott may have extra motivation. He had his worst performance of the season against the Redskins in the 20-17 loss in October gaining just 33 yards on 15 carries.

Leon Lett defined by more than one play 25 years ago – Todd Archer, Dallas Cowboys Blog- ESPN
“Big Cat” Leon Lett is a key member of the Dallas coaching staff now, and has gained some perspective on a real moment of infamy for him.

Twenty-five years later, Lett cannot run away from one of the most infamous plays in Thanksgiving Day history. That’s one of the downsides of playing for the Dallas Cowboys. People never forget.

“There’s still people that throw it out to me, but it’s fun,” Lett said. “The No. 1 thing for me is moving on from it.

“You know, it was a bad play, happened at a bad time, but I think at the end of the day, at the end of the season I had the last laugh. We won the Super Bowl. I had a part in us winning that Super Bowl and one of the big plays in that game, so for me that was my redemption.”

On the other side of the spectrum, Thanksgiving Day 2006 was quite the thrill for Cowboys fans. It was the first time we saw Tony Romo on Turkey Day, wearing those classic Cowboys throwbacks at that, and he threw five touchdowns against the Tampa Bay Buccaneers. Five! One of them even went to Terrell Owens who used the Salvation Army kettle as a prop way before Ezekiel Elliott ever did. It was the official announcement to the world that Tony Romo was in fact for real.

Could Connor Williams Be Option at Tight End for Cowboys? ✭ Sean Martin, Inside the Star
I personally don’t think this is going to be something the Cowboys use a lot – but I do like the thinking on finding a way to use Connor Williams while Xavier Su’a-Filo is holding down the LG role.

Lining Williams up at tight end in “Jumbo” formations may be an outside-the-box solution for the Cowboys. 41% (89 of 217) of the Cowboys hand offs this season have come with Swaim on the field, showing this offense will still need to value the TE position in the running game.

Schultz has played just 31 run snaps this season, compared to 211 for Williams. The collegiate left tackle has struggled where Su’a-Filo has thrived at left guard. Anchoring against bigger, stronger defensive tackles was not Williams’ strength in eight starts.

Using Williams for down after down against even more athletic and faster edge rushers is not the way for the Cowboys to instill confidence in their 50th overall pick. With much more experience blocking on the end of the line of scrimmage, Williams could still prove a serviceable tight end when playing on the move and opening holes for Ezekiel Elliott.

The Marinelli Report, Week 11: Slowing Atlanta down suggests Cowboys defense is real deal –Bob Sturm, The Athletic
There was a lot of debate in social media on Wednesday about whether the Cowboys D is “elite”. This is a nice, balanced look at what they are doing well.

Dallas certainly did not play a perfect game on Sunday in Atlanta, as the Falcons did generate some nice yardage and impressive yards per play. In fact, Julio Jones did all sorts of damage as the day went along and had all three explosives. But when you factor in what the Cowboys defense did to mitigate damage, along with all of the negative plays they generated to stop drives, convert touchdowns to field goals, and even get that game-winning takeaway, it would sure seem that Rod Marinelli’s group was responsible for perhaps its most impressive result of the year.

The Cowboys defense has really been good this year and I think it is important for us to count the ways. They certainly have elite talent at many spots. I think that was in doubt 18 months ago, but now we look at each level and we see players that are not spot-fillers, but stars who any team must game-plan for or around. Demarcus Lawrence up front, Leighton Vander Esch and Jaylon Smith at linebacker, and Byron Jones at corner have the whole league on notice. And it is taking effect as those around them are playing up to their speed and believing that they are at that level, too. This defense appears to have swagger. And even though that can be very short lived in this offense-dominated league, they are feeling it right now.