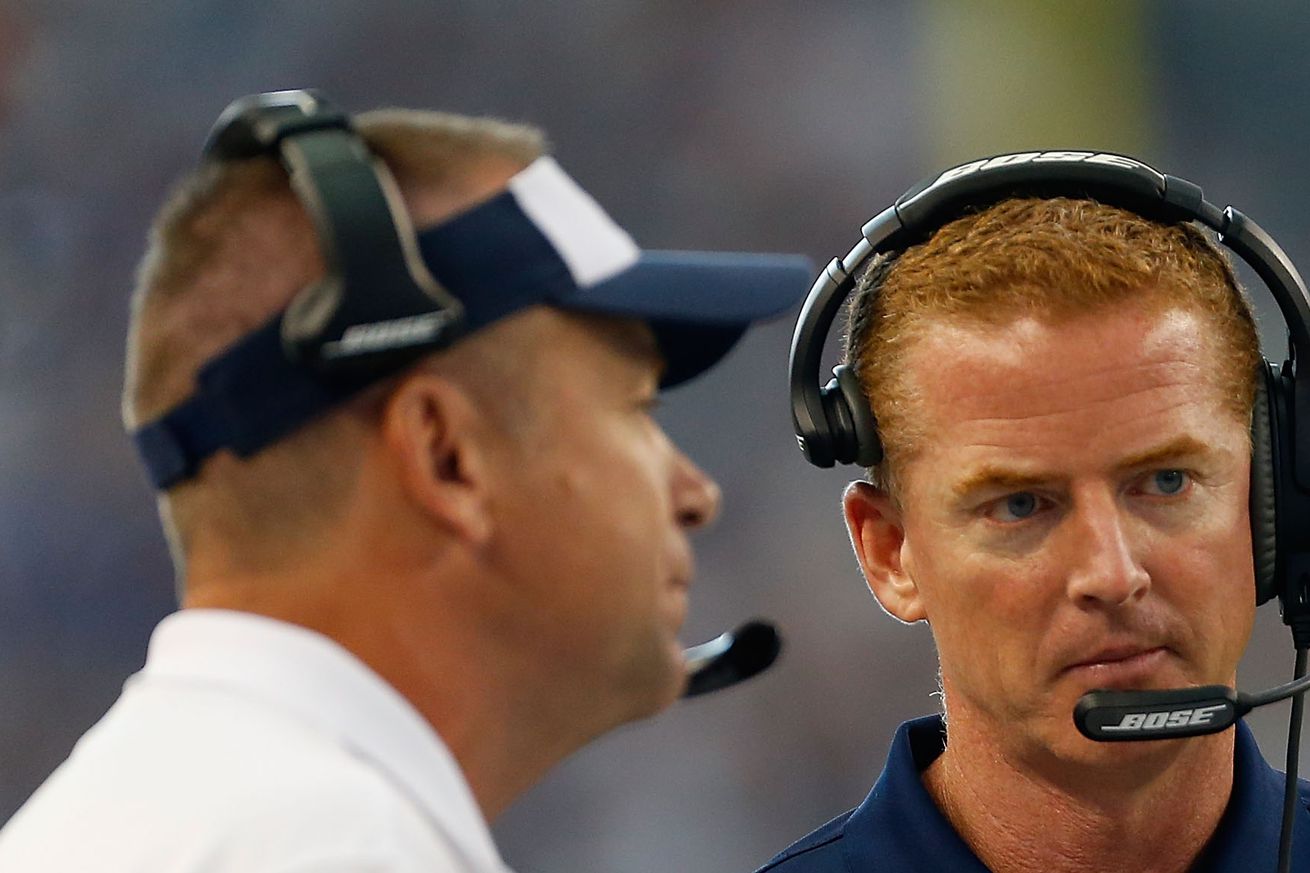 All the news you need right now.

Scott Linehan explains why Cowboys have passed on first-and-goal from the 4 instead of handing to Ezekiel Elliott – Jon Machota, SportsDay Dallas
Offensive coordinator Scott Linehan has certainly endured his fair share of criticism throughout the season. Some of that extends to his decision to, on more than one occasion, call pass plays in first and goal situations instead of running the ball with Ezekiel Elliott. Linehan explained his reasoning behind those decisions.

“That’s a good question,” offensive coordinator Scott Linehan said Tuesday. “They know that’s what we want to do.”

Linehan went on to explain that the decision is largely about balance. Most of the time the box is stacked because opposing defenses believe the Cowboys are going to hand it to their star running back.

”We feel like we want to have a balance to our approach there,” Linehan said, “not resist the urge because they know we want to do it. But also know we have to have a stubborn approach no matter what we do even if we have to get big people to run the ball because that’s what you really have to when you get these bear defenses that people run. It makes it a little more difficult.

”We feel like we’ve missed an opportunity to cash in on those but we certainly want to be better in that regard. But I think our short-yardage stuff has really picked up, especially in the last four weeks.”

Cowboys All-Pro Tyron Smith to be game-time decision vs. Saints – John Sigler, SaintsWire
Tyron Smith’s neck stinger from two weeks ago continues to pose problems for him; the All-Pro left tackle sat out the Thanksgiving game against Washington. In preparing for another Thursday game against the red=hot New Orleans Saints, Smith’s status is uncertain.

“Don’t anticipate him doing much today. If he does, he’ll work on the side. But we’ll take him all the way to game time and give him a chance to play and see if he’s able to.”

Demarcus Lawrence on Saints’ OL: ‘They ain’t faced us’ – Kevin Patra, NFL.com
The Cowboys’ opponent this week, the New Orleans Saints, are one of the hottest offenses in the NFL right now and seem unstoppable. Not only is Drew Brees firmly in the MVP race, but running backs Alvin Kamara and Mark Ingram are enjoying success. A lot of this comes down to the Saints’ stout offensive line, but DeMarcus Lawrence is ready for the test.

On Tuesday, Dallas defensive end Demarcus Lawrence took a shot at the Saints offensive line when asked if it’s the best he’s faced all season.

”I don’t know, (expletive) I got to see first,” he told Calvin Watkins of The Athletic. “They ain’t faced us. We don’t know yet, we can talk about it afterwards. I’ll be honest with you too.”

“We’ve been talked up as being the difference,” he said. “They’re going to have to match our intensity, (expletive), for 60 minutes straight. If you hit (expletive) in the mouth they ain’t doing what they regularly doing, and putting up 50 points, and they start to get a little distressed. So now you got them where you want them at and then (expletive) choke they (expletive) out.”

Cowboys owner Jerry Jones lauds Sean Payton, says ‘Super Bowl play’ needed to defeat Saints – Christopher Nabe, NOLA.com
For all the great players that are part of the 10-1 Saints, the man behind it all is head coach Sean Payton, who has a history here in Dallas. Before he took the top spot in New Orleans, Payton was the offensive coordinator for the Cowboys under Bill Parcells. Jerry Jones took a moment to recognize the greatness of Payton ahead of Thursday’s matchup.

“Without a doubt, he’s a great tactician,” Jones said. “He really has the got the NFL down. His stuff always works. He will take risks. That can be a very frustrating aspect of playing him. He also is a really great coach, a great leader. He has a leadership style that is pretty impressive.”

“Each play,” Jones said, “we got to think it’s the Super Bowl play; it’s the play. We’re going to have to play it that way on our defense as well as in our play offensively. Big games like this come down to the individual play. If every player on every play in this game is saying, ‘What we put down on tape Monday is going to look like one of my best plays of the year,’ it’s really going to take that kind of focus to beat a team like this.

Sean Payton has high praise for Dak Prescott – @jonmachota
Speaking of Payton, he had some very kind things to say about the Cowboys’ starting quarterback when asked about him on Tuesday.

Sean Lee plans his Cowboys return for Dec. 9 Eagles rematch – Mike Fisher, 247 Sports
The highly impressive play of rookie linebacker Leighton Vander Esch may have made some forget that Sean Lee is still sidelined with an injury, but the veteran leader is getting closer to making his return.

Some have come to the Dallas Cowboys to bury Sean Lee, not to praise him. But this is no Shakespearean drama with some tragic ending — not yet, as Lee’s own plans, as expressed here inside The Star on Wednesday, feature him returning to practice next week following Thursday’s meeting with the New Orleans Saints, just in time to participate in yet another “NFC East title game’’ against the Philadelphia Eagles, who visit AT&T Stadium on Dec. 9.

Former Texas Tech head coach getting calls from NFL teams – @Gil_Brandt
When Texas Tech fired Kliff Kingsbury, he immediately become a hot offensive coordinator candidate at both the college and pro levels, and his strong ties to the state of Texas prompted many to speculate on potential connections to the NFL’s two Texas teams. According to recent Cowboys Ring of Honor inductee Gil Brandt, Kingsbury’s NFL prospects are looking good.

The phone of former Texas Tech coach Kliff Kingsbury has been ringing off the hook from NFL teams, including two that have given him firm offers. College offense has infiltrated the NFL and Kingsbury’s superb knowledge of it is in high demand.

Stephen Jones on Cowboys WR Amari Cooper fitting in so quickly: ‘That’s why we pulled the trigger’ – SportsDay Dallas Staff
There was no shortage of critics and skeptics when the Cowboys traded their 2019 first-round pick for Amari Cooper a few weeks ago, but now that Cooper has been one of the best receivers in his short time with Dallas, the trade seems like a steal for the Cowboys. Stephen Jones says he knew this would happen all along.

“No, it’s hard to imagine. At the end of the day, that’s why we pulled the trigger. Amari is certainly a guy who brings a lot of different elements to the game. He’s not only a great route runner, he’s got exceptional explosiveness. He’s got great speed, and then of course he just goes out there and gets his job done. So, you know, he really fit in terms of what he can do for, not only our offense, but probably any offense, and then on top of that he’s 24 years old. So, really felt like he could be around here for many years to come. Certainly that’s why we pulled the trigger.”

Amari Cooper made the Pro Football Focus team of the week – @PFF_Cowboys
He’s seemingly gotten better each week with the Cowboys, and Amari Cooper hit a fever pitch last Thursday with his spectacular play against the Redskins. In fact, it was so good that Pro Football Focus added him to their team of the week, as the receiver had the second-highest grade of any player.

Amari Cooper made PFF’s team of the week