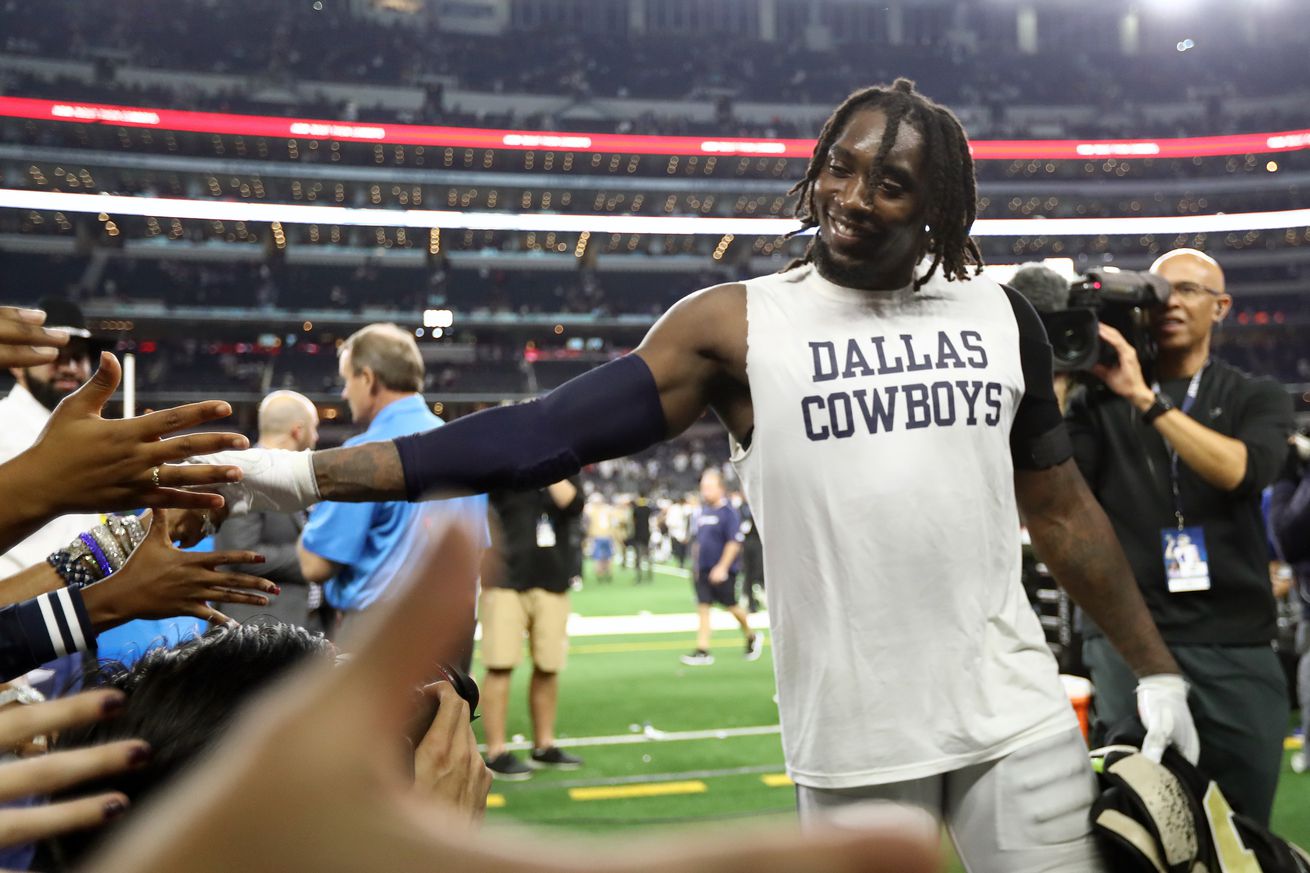 The story of this victory belongs to the Cowboys defense, they did exactly what they said they would.

Cowboys defense dominates New Orleans Saints in statement win – Clarence Hill, Fort Worth Star-Telegram
When your best defensive player calls it days before the game, you better deliver. The Dallas Cowboys defense backed DeMarcus Lawrence’s words all the way up.

DeMarcus Lawrence brought the hype, and his Cowboys’ defense lived up to it in elite performance vs. Saints – David Moore, SportsDay
Nothing is better than being able to say “I told you so.” Tank Lawrence…Cowboys defense…take your bows!

A New Orleans team that entered the game as the highest scoring offense with an average of 37.1 points was shutout in the first half. The Saints scraped together only 176 yards on offense, were 3-of-11 on third down and suffered a crucial turnover late.

The talk in the NFL this season has been how the league may be on the verge of a new, explosive era. New Orleans, the Los Angeles Rams and Kansas City have been at the forefront of that excitement.

Dallas reminded all those visionaries what a team with a dominant defense can do late in the season.

They talked the talk, and in the end, they walked the walk.

The Dallas Cowboys came into this game against the New Orleans Saints knowing they were playing perhaps the best team in the NFL. Yet they were confident they could go blow-for-blow with the favorites.

And they did just that, shocking New Orleans with a 13-10 victory in front of a sold-out crowd of 93,004 at AT&T Stadium and a Thursday night prime-time television audience.

While the Saints’ Drew Brees came into this game as the league’s leader in passer rating (127.3) and completion percentage (76.4), Dak Prescott actually outshined the future Hall of Famer. The Dallas quarterback completed 85.7 percent of his passes for 248 yards and a touchdown with a passer rating of 115.5. And this despite being sacked seven times.

Dallas Cowboys stun New Orleans Saints 13-10 – it is time to believe – Tom Ryle, Blogging The Boys
This defense is for real, folks. No debate needed.

If someone had told you before the game that the Dallas Cowboys would only score 13 points against the New Orleans Saints, you would have been sure that it would be a loss, and probably a badly embarrassing one at that. But the Cowboys defense had what was their best performance of the season, and really much, much longer than that, holding the high-powered Saints offense to just 10 points. And in a game that was so different from expectations in so many ways, it ended with three consecutive kneel downs, as the Saints could only look on helplessly. Just like we all expected, an old fashioned defensive slugfest.

Cowboys’ path to playoffs becomes clearer after stunning Saints – Todd Archer, ESPN
Dallas’ defensive effort was spectacular, nobody does this to the New Orleans Saints offense. This Cowboys defense bludgeoned the league’s most explosive offense.

The Cowboys’ defense, which was fourth in points allowed entering the game, stole the headlines and took a big step toward the postseason.

Dallas defense wants to be elite? Stunning wins like Thursday night’s validate that -Jon Machota, SportsDay
Did that just happen? Did the Cowboys just do what everyone thought was impossible: end New Orleans’ 10-game win streak. Yep.

I thought the Cowboys were in big trouble after Lawrence dropped a few expletives about the Saints’ offensive line Tuesday. That factored into my prediction that the Cowboys would lose 35-17. But the defense played an outstanding game. So many players contributed. From Lawrence to Lewis with the big INT, to Leighton Vander Esch and Jaylon Smith making stop after stop. And there are plenty of others I’m leaving out. The Cowboys’ defense wants to be elite. Wins like Thursday night validate that. This is the best group the Cowboys have had since Jason Garrett has been head coach.

That Saints team didn’t show up in the first half at AT&T Stadium. The Cowboys capitalized on their shutdown defense to become the first team in 32 days to lead against the Saints, and they would never relinquish that advantage.

The Saints set or matched their first-quarter lows with 16 total yards, 5 passing yards and just one first down. A team that had gone three and out 14 times in 11 games did it twice in the first quarter. And the Cowboys defense didn’t let up the pressure. The Saints, who converted 47 percent of third downs through 11 weeks, made it on just 27 percent Thursday night.

Brees, who is having one of the best quarterback seasons in NFL history, completed just 18 of 28 passes for 127 yards, one touchdown and a stunning interception with 2 minutes, 8 seconds remaining when the Saints were still trailing just 13-10.

And the Saints, who were averaging an NFL-best 37.2 points per game, gained only 176 total yards while falling to 10-2 on the season — a half-game behind the Los Angeles Rams in a tight NFC race.

The Cowboys, meanwhile, won their fourth consecutive game to climb to 7-5 on the season by manhandling the Saints all night (as Cowboys defensive end DeMarcus Lawrence colorfully suggested they would try to do earlier this week).

Dallas Cowboys have a championship-caliber defense led by DeMarcus Lawrence -Mac Engel, Fort Worth Star-Telegram
The Dallas Cowboys’ defense dominated the Saints in a 13-10 win, and showed that they truly are “elite”.

The Saints entered the game averaging 416 yards per game; against the Cowboys, they had 176. Brees threw for 127. The Saints went three-and-out on their first two possessions. They didn’t register a first down until the last play of the first quarter.

With 10 minutes remaining in the second quarter, the Saints had the ball at the Cowboys’ 7 and a first and goal; the defense prevented them from scoring on a 4th-and-1 run by Alvin Kamara. The Saints even had to dust off their punter. Saints’ punter Thomas Morstead had to be exhausted Thursday night; the guy had to punt four times, which tied his season high.

The last time the Saints scored so few points was 2015.

Check out our postgame podcast with sounds from the locker room!