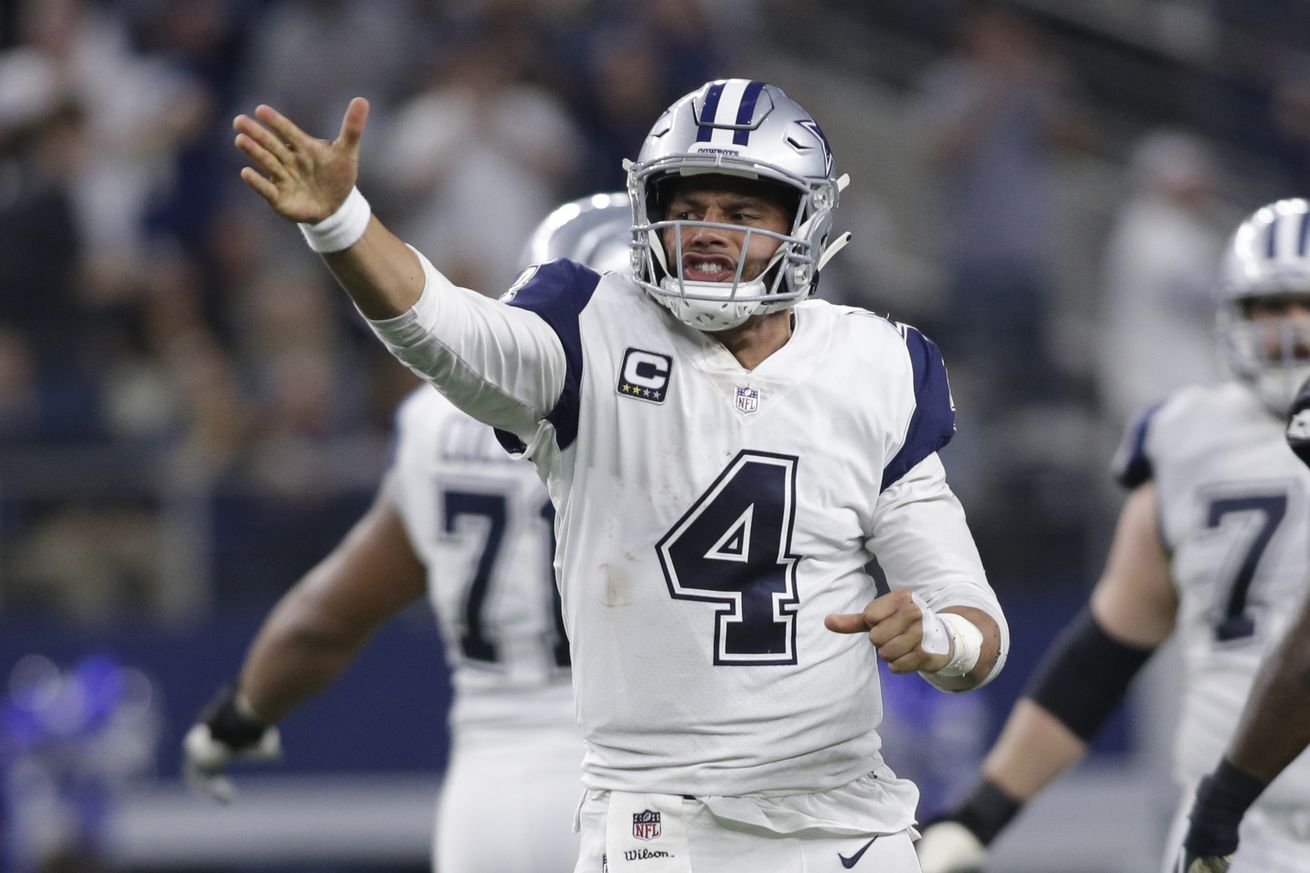 The Cowboys quarterback isn’t letting the pressure get to him and there is plenty of it.

Remember last season between weeks 9-12? You know, that time where Dak Prescott was sacked 15 times in four games? How about the infamous “Burning of Atlanta”? All-Pro left tackle Tyron Smith was out of the lineup and the Cowboys nightmare was realized. Atlanta is where it all started, a day that Chaz Green was beaten so badly off the edge, you would think he owed Adrian Clayborn money. That eight-sack day was referred to as the day that broke Dak Prescott. In his next 11 games, he was 5-6, and was sub-200 yards passing in nine of those games, and was sacked 33 times. Indeed, weeks 9-12 of 2017 were some of the darkest days for the Dallas Cowboys. That four-week stretch was even darker for the young quarterback:

As bad as 22 sacks in his final eight games of 2017 were, Dak is actually on pace to be sacked more this season. Prescott was sacked 32 times last season but he’s already been sacked 45 times through 12 games. At a pace of 60 sacks, Prescott would easily set the franchise record for times sacked in a single season which is held currently by Drew Bledsoe (49 -2005).

Now, sacks are a tricky statistic because there are many variables. A quarterback could be sacked because of coverage, he could also be sacked because he holds the ball too long or shows poor pocket awareness. This has been an issue for Dak and I would wager every Cowboys enthusiast has screamed “THROW IT!” several times this season. It’s never an exact science but PFF has charged Dak with his own share:

Dak Prescott has been credited with 14 of the Cowboys’ 45 allowed sacks this season by @PFF.

By those PFF stats, Dak is taking an average of 1.2 sacks per game and often times we have seen them come at the most inopportune times. Sacks have the ability to disrupt a quarterbacks timing and can mess up his mechanics which we’ve seen both of with Prescott. He has committed all kinds of transgressions in quarterbacking and has fumbled 12 times this year, recovering six of those. For his part, Dak has publicly shouldered blame for his role in the sacks this season and has worked to correct those mechanical errors. The results from week 9-12 this season are much different for Dak this time around:

Despite being sacked two more times than this time last season, Prescott is actually playing really well. Lately, the Cowboys have been severely handicapped on the left side of the line again but it’s not nearly as damaging. Against the Saints, Dak was practically “Chaz Green’d” again by left guard Xavier Su’a-Filo:

I regret to inform you that the shine might be off the Xavier Su’a-Filo project. That was close to a Chaz Green-level performance.

To be fair, Su’a-Filo has been dealing with an ankle injury that has seen his play drop off a bit. He earned the job a few weeks back for a remarkable performance against Fletcher Cox. He’s just been a different guy since injuring his ankle, which may mean it’s time to get Connor Williams back in to let Su’a-Filo heal up.

Another sack given up by XSF. Holds up well initially, but fails to latch and control Onyemata, who is able to bully is way into a sack. pic.twitter.com/1f3Ym5Y3Ck

Su’a-Filo is just one of three fill-ins over the past few games with Cameron Fleming in for Tyron Smith, and Joe Looney, who has subbed at center all season for Travis Frederick. At least the Cowboys are expecting Tyron Smith back because without him, they can’t disguise deficiencies on that left side. The line just isn’t what it used to be without it’s key components.

Right now, they are ranked 31st in pass protection while ranking 9th in run blocking by Football Outsiders. Prescott is getting sacked on 11% of his 344 pass attempts which is most in the league. The only game when Dak wasn’t sacked was week two against the Giants. Despite being brought down 17 times in the last four games, we are seeing a much better Dak Prescott than we saw prior.

The Saints sacked Prescott seven times on Thursday, the most since the eight he took in Atlanta last year. The Cowboys are fortunate that he got back up each time and managed to complete 86% of his passes. Still, no quarterback can survive in that type of environment for very long. Even with Dak Prescott’s own improvements, the offensive line has to be much better if they plan to make a deep run in the playoffs.