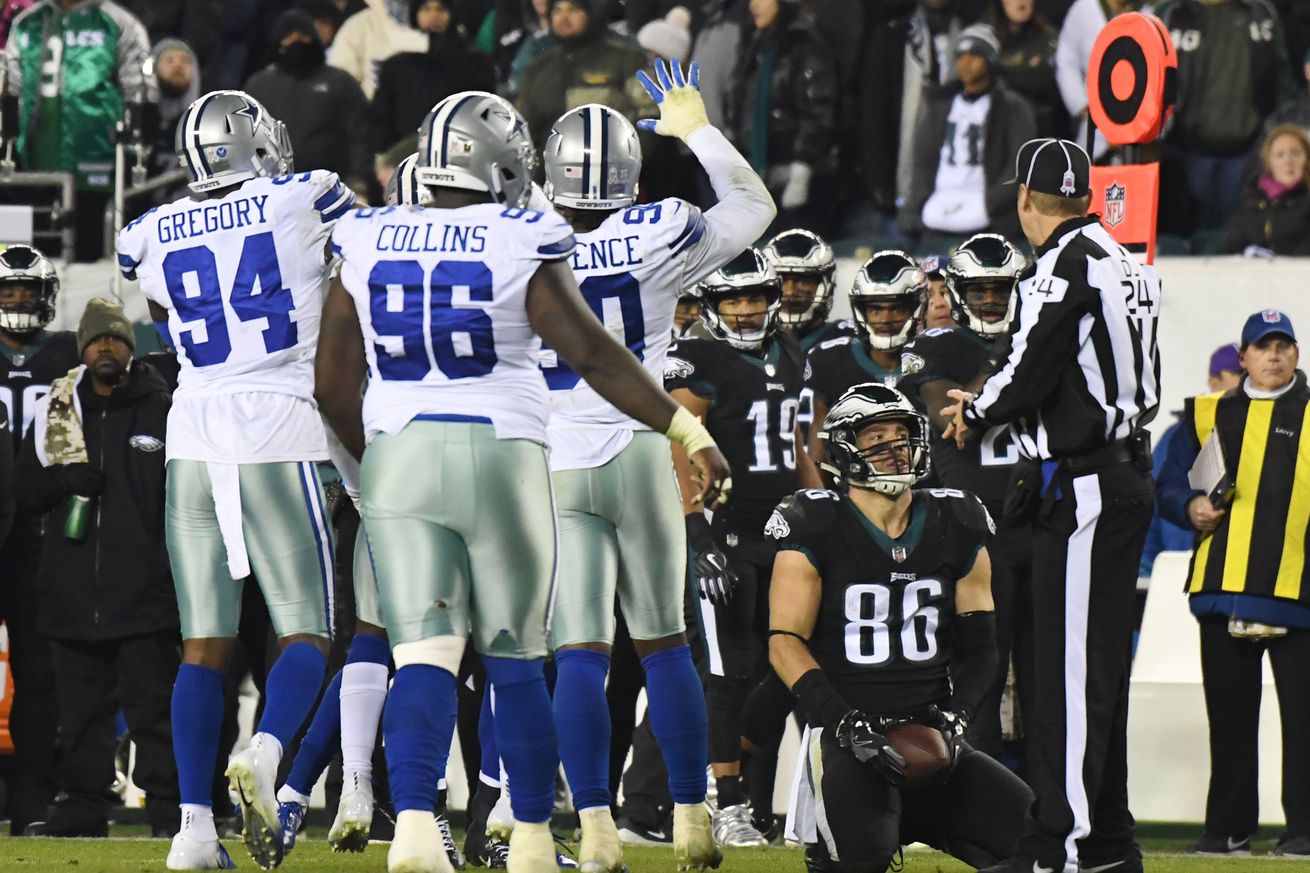 The Cowboys and Eagles both have a lot at stake but it’s time for Dallas to end this NFC East race.

It feels as though the Cowboys have played three seasons in one as we’ve seen them be just about every type of team there is through 12 games. In the first quarter of the season, Dallas was a .500 football team, followed by a bad 3-5 football team, to now a 7-5, and potentially NFC East division champions if they sweep the Eagles this week, team. Well, they’ll virtually be NFC East champions, as the odds to win the division would rise from 73% to 97% favorable with three games to play. Coincidentally, it was in Philadelphia where this Cowboys four-game winning streak began last month. The Eagles are coming off winning two straight division games against the Giants and Redskins which have put them right back in this race.

The NFC East continues to be among the most competitive divisions in the NFL and it famously hasn’t had a repeat winner since 2004. This season has been no different as “first-place” has been nothing but a placeholder as far as this division goes. These teams just never really separate much from one another. At different points of this season, pundits have joked that maybe 8-8 could win the NFC East. Now, due to stumbles by other NFC teams, the East could possibly produce a wildcard team. But we’re not here for wildcard talk, the goal has always been winning the division.

From week five through Thanksgiving, it was the Washington Redskins at the top of this division. That was until they lost quarterback Alex Smith to a horrific leg injury, lost his backup Colt McCoy this past week, and are now in the hands of Mark Sanchez. It doesn’t help that Washington has lost three straight, two inside the division. Realistically speaking, this NFC East race is down to the two teams doing battle on Sunday. The Eagles have one shot for the East and that’s by beating the Cowboys on Sunday and raising their division odds to 49%. If not, Philly will be staring at less than 1% chance at winning the East so we know they will be desperate to win. Well. Dallas should be just as desperate, if not more desperate, because this game is about leverage.

The Cowboys confidence is understandably high having just knocked off the former NFC top seeded Saints to grab their fourth win in a row. However, if the Cowboys lose this game, suddenly the luster of the past four weeks dims and they will lose all leverage to the Eagles. This is the game, the only game that matters right now because this game is the reason the Cowboys dug themselves out of a 3-5 hole to begin with. It’s the reason they went out and traded for Amari Cooper because they saw this division race as theirs for the taking. If the Cowboys lose, they will be forced to dig themselves out once again but previous losses to Carolina, Seattle, and Washington will only deepen the hole if they end up going the wild card route.

As Benjamin Franklin once said: “Don’t put off until tomorrow, what you should do today.”

One great thing about Jason Garrett is his ability to keep a singular focus and this team has maintained that their “backs are still against the wall”. Credit is due for this coaching staff and the players for not folding up after everyone read them their last rights at 3-5. When media talks about “must-win games” in week two of the season it’s ridiculous, but the label fits when you’re 3-5. The Cowboys have played like a desperate team for the past month and now they have everyone believing in them but they also believe in themselves.

Maybe we were just watching a young team go through growing pains. The road to success is bound to have many hills and valleys but this team has fought through all their imperfections to give themselves an opportunity. That’s more than a lot of 3-5 teams in this league have done in the past. The Cowboys never rolled over, they doubled-down, even when the masses were calling for major changes. They know what’s at stake this weekend but can they seize the opportunity to end this division race now. Technically, NFL playoff procedures will state that the NFC East can’t be “clinched” this Sunday. We all know that’s merely a formality, if this Cowboys team gets the job done against the Eagles, all that’s missing will be the ceremonious hats and t-shirts.