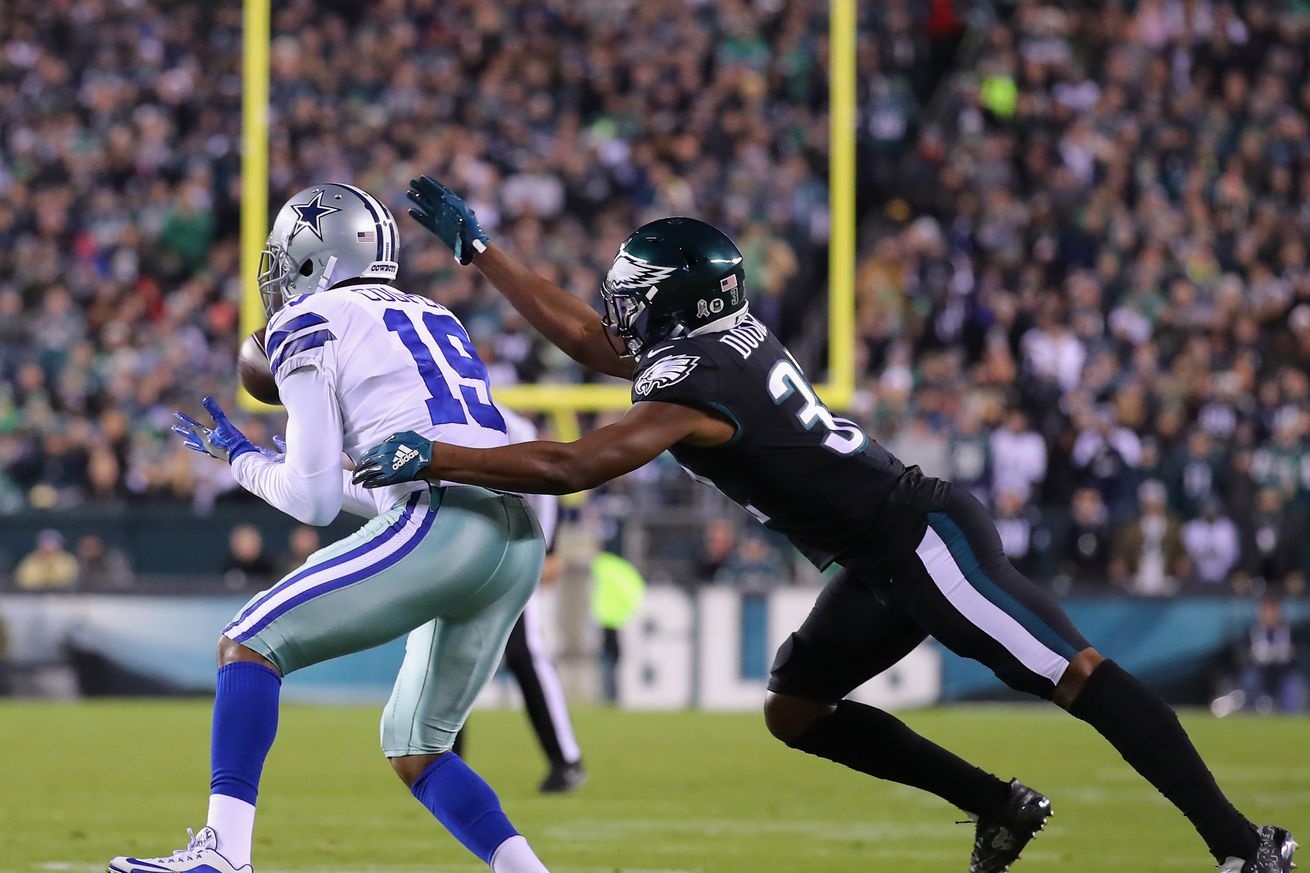 The last time these two teams faced off, the Cowboys were seven point underdogs. It was the turning point for the Cowboys season and now they are the favorite to come out on top.

The Dallas Cowboys host the Philadelphia Eagles in a crucial NFC East showdown on Sunday at 4:25 p.m. ET. Dallas is 7-5 and has won four in a row, while Philly is 6-6 with two-consecutive victories of its own. Dallas is a field goal favorite in the latest Cowboys vs. Eagles odds, with the over-under for total points scored at 44.5, up from an open of 43.

After four straight wins, it feels like the Cowboys finally have a little room to breathe, but don’t try to tell them that.

While the Eagles have back-to-back wins for the first time this season, the defending champs badly need a third if they want a shot at another Super Bowl. With a victory, Philadelphia would pull even with Dallas and have a season split with a better division record, the first tiebreaker between two teams. Lose, and the Eagles will trail the Cowboys by two games with just three remaining. The Cowboys would counter that they’re fighting to maintain control of their playoff fate.

“We don’t have a margin,” offensive coordinator Scott Linehan said. “We approach it no different than we did when we were, whatever it was, 3-5. Coach (Jason) Garrett’s been obviously talking that every minute of every day.

Whatever Garrett is sharing with his team, as usual, he’s not sharing it publicly. “I don’t really understand what you’re talking about,” Garrett said when asked about preaching against any tendency for the team to ease up. “Our backs are to the wall. They’re always to the wall and that’s how we look at it.”

The Cowboys should be getting back one of their best offensive linemen just in the nick of time to face the Eagles’ pass rush.

All-Pro offensive lineman Tyron Smith has missed the last two games due to a stinger issue, but is expected to return to the starting lineup on Sunday. Smith has been dealing with a lingering elbow injury, as well, but it has been reported that is it progressively getting better. The 6-foot-5, 312-pound left tackle has been wearing a brace on the injured elbow. Not just any brace, though. Because no elbow brace will fit Smith, according to a Cowboys staffer, Smith has been wearing a knee brace on his elbow. A knee brace!

Here is a final practice report for the Cowboys:

Michael Gallup (illness) and Tyron Smith (neck) are listed as questionable for Sunday but both are expected to play pic.twitter.com/0ck2BvB3uA

And for the Eagles:

Will the Cowboys game be shown on TV in your area? 506 Sports hooks us up with a region map with the TV schedule and if you’re in the red, you’re happy.

If the Cowboys want to improve their chances against the Eagles, they need to get saucy – Matt Mosley, SportsDay

Matt Mosley takes a moment to answer some questions, including who he thinks will be the difference maker in this game.

What’s the biggest X-factor heading into this Cowboys-Eagles game?

Matt Mosley: I don’t think 13 points will win a game against the Eagles, and that means the offense has to generate some points. The Eagles respect the arrival of Amari Cooper, but I can promise you that most of their plan will be trying to limit Ezekiel Elliott. That means that Dak Prescott needs to be on point and try to make this defense respect the passing game. To me, it feels like Cole Beasley will be the X-factor in this game. The Eagles certainly are playing better in recent games, but that secondary is still pretty leaky at times. I think you’ll see the Cowboys go to Beasley early and often in this game. He will be a big part of the third-down passing game. If he can make some plays, I like the Cowboys chances of getting a win against the Super Bowl champs.

Speaking of X-factors, the Eagles have a shifty receiver of their own.

Golden Tate wasn’t much of an impact the first time these teams met, but it should be different this time around as he becomes more familiar with the offense.

“It gets better every day,” Tate said on Friday at the NovaCare Complex. “My level of comfort is pretty good now. I can’t say that I know the whole playbook, but I know the game plan each week and I’m learning more all the time. I’m working hard at it.” Sunday’s game at Dallas marks Tate’s third game of the season against the Cowboys. When he played with Detroit on September 30, Tate had eight receptions for 132 yards and two touchdowns in the Lions’ loss.

On November 11, in his first game as an Eagles after coming over at the NFL’s trade deadline, Tate caught two passes for 19 yards in a 27-20 defeat. Maybe the third time will be the charm for Tate to beat the Cowboys this season.

Both teams have a new WR wearing 19 since the trade deadline and the one that has the biggest game could determine the winner.

Since getting him before the trade deadline, Cooper has given the Cowboys an offensive weapon they hadn’t had since Dez Bryant was in his prime. In the first meeting between these two teams, Cooper had six catches for 75 yards, but since then, he had that huge breakout game against the Redskins. Jalen Mills is still on the shelf, so Douglas is likely to get another start Sunday. He had an up-and-down game against Washington. He struggled in coverage at times but made some really important tackles at other times. This season has been up and down for Douglas and this will be a tough test in the most important game of the year.

Athlon Sports provides three things to watch, including how the Cowboys quarterback is going to have to perform for Dallas to win on Sunday.

3. Can Dak Prescott come through?

The Cowboys’ defense has done a great job the past four weeks taking the game out of Prescott’s hands. His stats have been impressive – four touchdowns, no interceptions – but have come paired with no 300-yard performances. Prescott has filled the role of game manager, doing just enough to ensure victory while Elliott drives the bus. But you have to think Prescott will need to do more Sunday afternoon.

It’s no secret the Eagles’ secondary has been banged up; Brees torched them with their top cornerbacks downed by injury. Sidney Jones returned against the Redskins but they’re still seeking consistency at that position with Ronald Darby sitting on injured reserve. The question is whether Prescott can make a difference if the Eagles stack the line against Elliott. Once Mark Sanchez came in Monday night, the Eagles’ defense did an incredible job of putting pressure on him. Peterson had just eight additional yards on the ground beyond that 90-yard touchdown while they dared the Redskins to beat them through the air.

Great quarterbacks like Brees have been able to rise to the challenge against what’s become a beatable Eagles defense. Others, like Sanchez and Eli Manning two weeks ago, made crucial mistakes that changed the momentum of the game.

What type of quarterback will Dak be on Sunday?

Eagles pass rusher took a moment to answer a few questions, including taking Dak out of his comfort zone.

“You try to stay in his face, mostly, and try to get him out of the pocket. Get him off his spot. Obviously, then you’ve got to stop the run cause that’s when he can be really balanced. When he’s balanced, [Prescott is] dangerous.”

Expert predictions for Cowboys-Eagles: Will Dallas all but wrap up the NFC East, or will Philly make it a race? – Staff, SportsDay

The panel of experts over at the Dallas Morning News weigh in on today’s game. It’s not unanimous as Tim Cowlishaw likes to be the oddball, but the vibe is good over there.

The Cowboys can make things easier on themselves by winning this game. Philadelphia’s drive is more primal. This is about survival. It’s hard to see what path to the postseason the defending champions can take if they lose Sunday afternoon. The Eagles clearly have the motivational edge, but is it enough? The Cowboys are healthier on both sides of the ball, their defense is dominant and this team is starting to play with a swagger that’s been missing since Dak Prescott and Ezekiel Elliott were rookies. Cowboys 27, Eagles 17.

The writing staff over at the Mothership share their ‘gut feelings’ for Sunday’s big game against the Eagles.

Something told me to pick the Cowboys the last time they played Philadelphia, mainly because I just thought this was the type of game they’d mess around and win it. I guess you could say the Cowboys are also the team that would mess around and lose a game like this. And yes, I’ve seen the Eagles come into town when things weren’t looking great for them but they still found a way to win. However, I’m saying the Cowboys are a different team this year. A team that can shut down the Saints’ high-powered attack. Ultimately, I think the Cowboys are just a better team right now than the Eagles. They will run the ball better and will get some big play in the secondary. I’m predicting some big pass interference penalties this week that will also aide the Cowboys. Michael Gallup gets on track again this week and Dak finally connects with him on a touchdown strike. I think the Cowboys get on the Eagles early and win it, 28-16.

Zeke and Dak wear long sleeves now and coach Garrett had went with a wardrobe change, but are they doing this out of superstition? Here are some other habits that other players do prior to the game.

Antwaun Woods says he plays better when he drives to the games with Maliek Collins. Jourdan Lewis wears the same cleats every game. Byron Jones prefers to start his pregame warmup at roughly the same time before every kickoff. Anthony Brown and Jaylon Smith have to stand next to each other during the national anthem. Brown makes sure the Goofy plush keychain he got while he and his son visited Disney World is always on his book bag during the week. Zack Martin takes a 15-minute Epsom Salt bath every Wednesday when he gets home from practice.

When the Cowboys were 3-5, I had a four-game streak of incorrectly predicting the outcome of Cowboys games. Ever since, I’ve used the “Constanza” method and have picked them to lose every week. It’s working.

I’m not superstitious, but I am a little stitious. What about you?

Not sure who to pull for this week? RJ has made it simple for you, including the other big divisional game going on.

Week 14 features every NFC East team playing against one another and while the Cowboys and Eagles sit at the adult’s table the Giants and Redskins will have their coloring books and sippy cups over on the one where high chairs are necessary. The reality of the situation is that New York trails Washington in the division so we want them to win. Another Washington loss (coupled with more Cowboys wins) helps Dallas secure the division all the more quickly which is something we’re always interested in. A Giants win also continues to destroy New York’s draft position which is oh so sweet.

Here is the complete rooting guide…