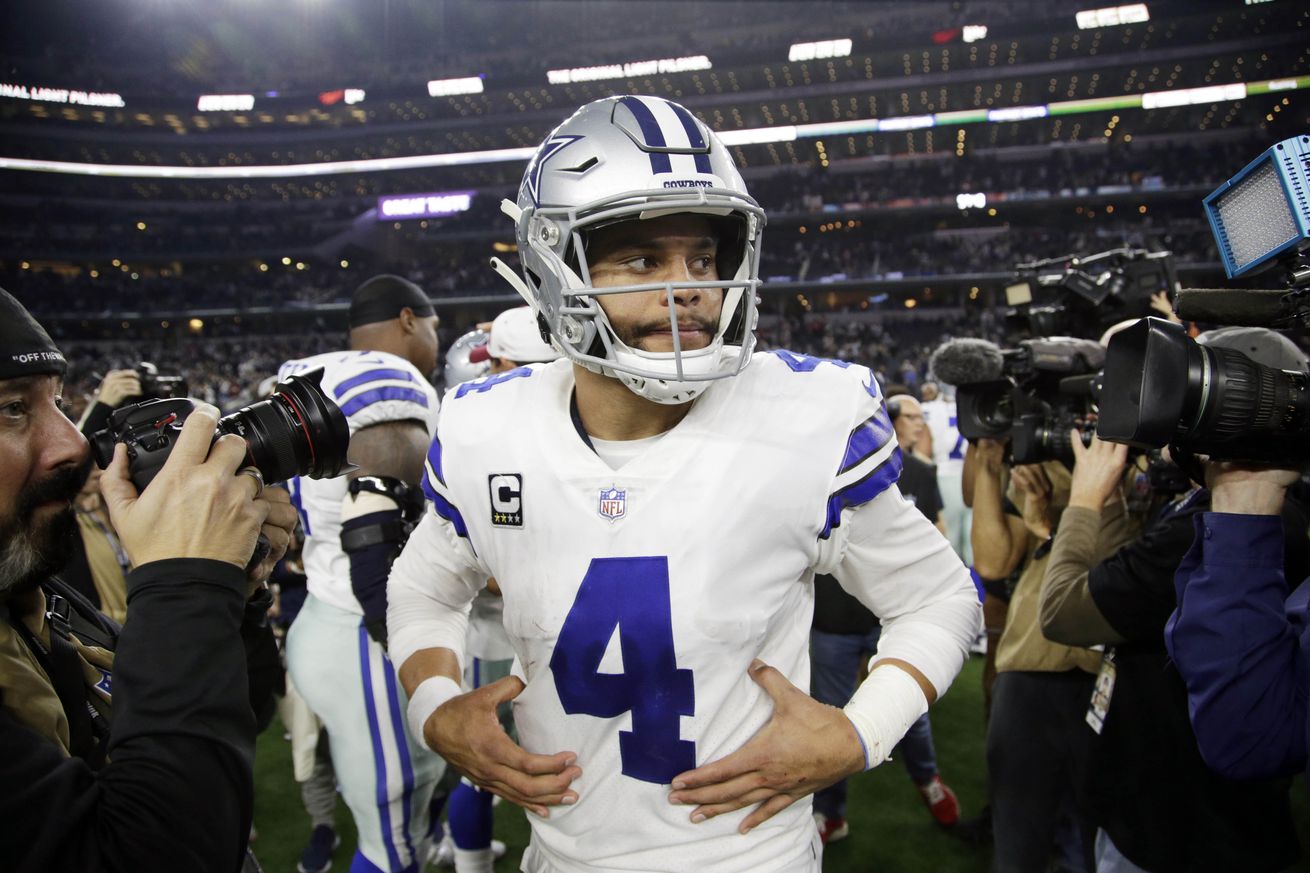 He has his flaws, but Dak Prescott continues to prove that he knows how to get it done when his team needs him to.

The Dallas Cowboys have won five consecutive games — including two victories over divisional foes and a huge win over the hottest team in football at the time: the New Orleans Saints. The team has all but locked up the NFC East, and the offense — while it certainly has its flaws — has shown signs of life with Amari Cooper making big plays on the perimeter. According to ESPN, America’s Team has a 99% chance to make the playoffs with games versus the Colts (on the road), Buccaneers (at home), and Giants (on the road) remaining.

Who would have thought that following the loss against the Redskins prior to the bye week? Or even after the Monday Night Football defeat to the hands of an up-and-down Tennessee Titans team?

No one is the answer. Nobody except for the players in that locker room that go to battle each and every day for one another.

The Cowboys have a defense that has played at an extremely high level for much of this season. DeMarcus Lawrence is a terror off of the edge, Leighton Vander Esch has shown flashes of becoming a superstar, and Byron Jones is playing like an elite cornerback in Kris Richard’s scheme.

On offense, Ezekiel Elliott continues to prove that he is among the elite playmakers in the game, and Amari Cooper has shown why he was a top-five selection in the draft and why the Dallas Cowboys were so excited to acquire his talents. While the problems in the red zone have been frustrating and play-calling may be questionable, this team has what it takes to win big games.

And it all starts with the man behind center, the quarterback.

Yes, Dak Prescott has some flaws. No, he is not a perfect quarterback. He is not Tom Brady, or Aaron Rodgers, or Russell Wilson. He is not as flashy as Patrick Mahomes or Drew Brees. He may not put up the numbers that Kirk Cousins does. But, he is the leader of this team and he has consistently proved to be a big-time player in the biggest moments.

There is no denying Prescott’s faults. He has had trouble anticipating throws before his receiver breaks open, though he has began to improve in that aspect since the addition of Cooper. He has had trouble fumbling the ball more than you would want. Dak can also be partially blamed for some of the sacks, too. He has a tendency to hold the ball with questionable pocket awareness. He did miss some throws that could have prevented an overtime period.

With all that said, there are so many things about Dak’s game to not only like — but to love. To appreciate. Prescott is a born-leader, respected by each and every person on the sideline. His warrior-like mentality rubs off on the rest of the team, and it has shown during this five-game winning streak. No matter how many times he gets hit, he gets right back up. If he needs five yards for a first down on a scramble, you can bet he won’t slide until he gets those five yards.

Prescott’s first three quarters were less than ideal on Sunday. Bad, to say the least. He missed throws, made some questionable decisions, and turned the ball more times in that period than the previous four games of the winning streak combined. But, when the pressure was on, and the game needed to be won, Prescott took matters into his own hands — and, well, Amari Cooper’s, too. Number four threw for 243 yards and two touchdowns while completing all but three passes — in the game’s final 20 minutes alone.

Dak Prescott fumbled with 2:14 left in the third quarter. It was his third turnover of the game.

Dak was on absolute fire when the Cowboys needed him to be. Sure, it helps to have a wide receiver that is playing at an elite level like Amari Cooper — but couldn’t that be said for many? The fact of the matter is that Dak answered every score that Philadelphia had from the time that the Eagles tied the game with a field goal early in the fourth.

While, understandably, you would want Dak playing well for the full 60 minutes, Prescott plays at his best in the biggest moments. Our own Michael Strawn outlined that by the numbers, backing up that claim:

This is something to keep in mind when evaluating Dak’s overall play. Yes, it’d be nice if he could play at such a level all the time (and perhaps avoid some of those late game dramatics).

This wasn’t a one game sample size, either.

Dak Prescott has consistently shown up in the big moments. The game-winning drives against Washington, Philadelphia, and Pittsburgh during his rookie season come to mind. His 21-3 near-comeback against Green Bay in the playoffs in which he went toe-to-toe with one of the greats. Last year’s battle with Green Bay, where he put the Cowboys ahead with a little over one minute remaining, is another example.

It has carried over to this season, as well. Sunday was the latest example, but far from the only: engineering late drives against Washington (that was eventually negated because of a phantom snap-infraction call), the Lions, and the Eagles in Philadelphia all add to his impressive résumé of late-game heroics. The Cowboys signal-caller has the highest QBR on GW drives since 2006.

Dak has as many game-winning drives (4) against the Eagles as Wentz has in the NFL. https://t.co/I4VUdOc8qz

Prescott has a special ability to put everything else that has occurred in the game to the side when the game is on the line. He could be having an effective and efficient game or a terrible performance, but when the game hits the fourth quarter, Prescott turns his play up.

Despite a lot of criticism — some of it justifiable, some of it a little too over-the-top, especially considering how he performed down the stretch — Prescott turned one of his poorer performances into a historic stat-line: 455 yards (the most in a win in Cowboys history), three touchdowns, 104.9 rating, and a whopping 77.9% completion rate.

Dak Prescott had 455 passing yards, 3 TDs and a GW drive today. It’s okay to give him some credit. The dude was money when it mattered.

Dak’s intangibles are well-known. He is a guy that has charisma and has the unique ability to rally an entire 53-man roster around him. He has shown a short-term memory in the sense that Prescott can bounce-back from a turnover or a poor start and get back on track. Jason Garrett outlined just how tough Prescott is:

Jason Garrett on Dak Prescott: “That guy we’ve got playing quarterback for us, he’s a tough sonofabitch now. You saw that today. You saw the physical toughness, you saw the mental toughness and you saw him throughout the game overcome adversity and make the critical plays.”

Dak is who he is: he will miss a throw and might leave a play or two on the field, but he is also going to make a big play that is going to put his team in position to get the win. He will battle until the end and give everything he has out on the field.

Most importantly, Prescott is a leader that this team — and franchise — believes in, and that is what you want in the face of your franchise.