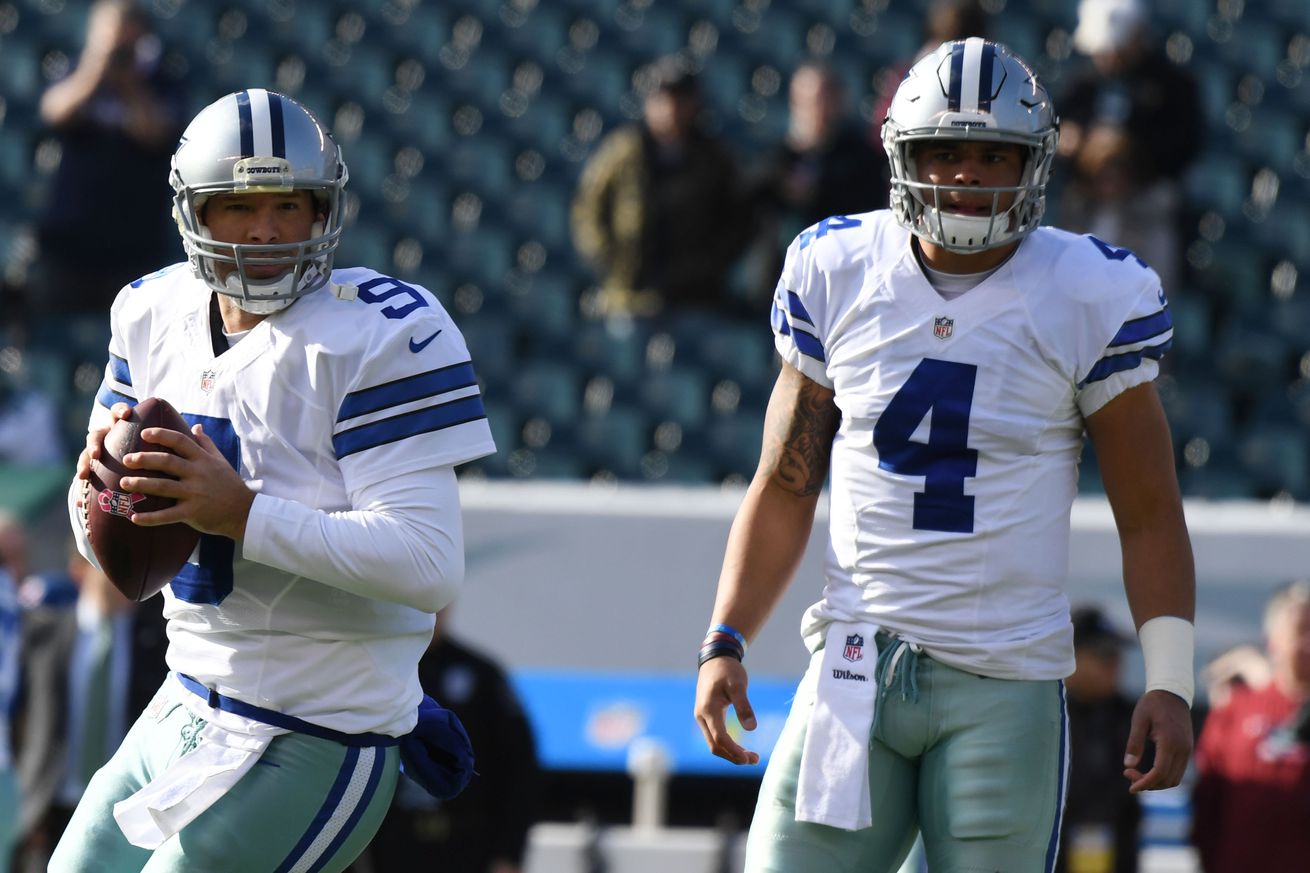 Both quarterbacks have been labeled as chokers before, the numbers indicate something else.

Dak Prescott had been on a hot-streak heading into the pivotal matchup against the Philadelphia Eagles on Sunday, but through three quarters that saw him go scoreless while throwing two picks and losing a fumble, it seemed as if Dak was about to fulfill Kamu Grugier-Hill’s choking prophecy. Then the fourth quarter began, and Prescott completed 85% of his passes for 234 yards and three touchdowns, including the game winner in overtime.

This marked the 13th time in his still-young career that Prescott has led a fourth quarter comeback or game winning drive out of 22 opportunities; his 83.1 QBR on these drives is the highest in the NFL since 2006, according to Football Outsiders’ Scott Kacsmar. It seems that once again the Cowboys have a quarterback who thrives in clutch situations despite having a less-than-stellar reputation across the league. This prompted Bobby Belt to produce the following nugget comparing Prescott with his predecessor, Tony Romo:

Prescott vs Romo in 4th/OT tied or trailing by 8 or fewer: pic.twitter.com/0Ba0TeHEAh

Naturally, Romo has higher numbers in the raw statistical categories like yardage and touchdowns given that Romo spent ten seasons as the starting quarterback and Prescott is only in his third. But the overwhelming similarities in completion percentage and yards per attempt is striking. Prescott has a significantly higher passer rating, although the passer rating statistic is getting less and less reliable as passing offenses continue to evolve and innovate. Still, Prescott also has a higher touchdown percentage and drastically lower interception percentage.

Of the past decade (2007-2016), Tony Romo leads all of 71 qualifying QBs in 4th Quarter and Overtime Passer Rating. #NotClutch pic.twitter.com/gYX4OVEHVR

For all of the criticisms that Prescott has received so far in his career, at least some of which is undeniably justified, it’s getting pretty hard to ignore that he elevates his game to another level in crunch time. Remember the first game against the Washington Redskins earlier this year? Prescott had that horrid fumble in his own endzone that was recovered by the defense for a touchdown to make it a 10-point lead. But after that, Prescott would complete eight of his fourteen pass attempts for 85 yards and also ran for 25 yards and a touchdown. He got his field goal unit in position for the game tying kick, but the infamous snap infraction took it back five yards for Brett Maher.

Of course, this is one of those nine situations in which Prescott did not successfully rally his team in the fourth quarter, but context shows that Prescott did his part in getting the team in position to force overtime. Sure, there was one play where he didn’t see a wide open receiver in the endzone, and there is fair criticism to be placed on Jason Garrett and Scott Linehan for playing for overtime instead of taking shots into the endzone to win. But Prescott did overcome his huge mistake and did his part to get the team to a win. It just didn’t work out.

This kind of mental toughness is something that is incredibly valuable and rare in quarterbacks, and Troy Aikman even referred to Bill Parcells in offering his take on why Prescott’s worthy of being the Cowboys’ starting quarterback:

“Bill Parcells talked about it,” Aikman told Dallas radio station 96.7-1310 KTCK The Ticket on Tuesday. “It’s easy to play quarterback when you’re winning. But when you go out and throw a couple interceptions and throw an interception that cost you the game, how do you go in Monday morning and confront your teammates and handle that situation?

“That’s when you start to realize what you have in a quarterback.”

The debate about Prescott and Romo will likely go on for a while, but the current quarterback at the very least has this in common with his predecessor: they’re both clutch. And that’s been huge for the Cowboys.