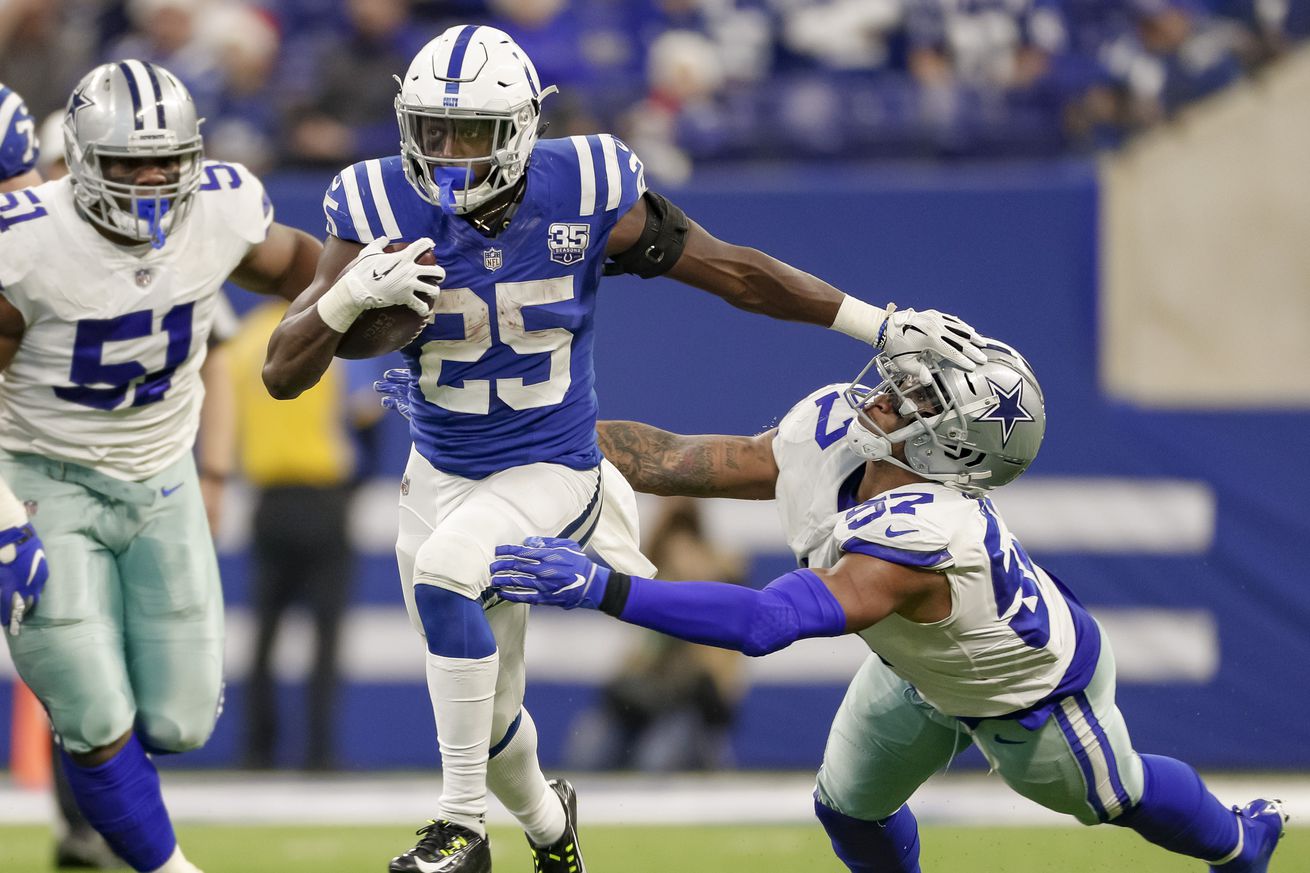 We picked only five plays, but the whole game was a disaster.

The Cowboys traveled up to Indianapolis on a five-game winning streak and got shut out for the first time in 15 years. All the Cowboys had to do was win the game and they’d clinch their division, but instead everything looked pretty miserable for Dallas en route to a humbling 23-0 shellacking. Here are the five plays that were most impactful in shutting down the team.

The Cowboys got the ball to start the game and quickly moved into enemy territory before the drive ultimately fizzled out, a refrain that’s become all too familiar this season. Sitting at the Indianapolis 30-yard line, Brett Maher trotted out for what should have been a simple 48-yard field goal to put Dallas up 3-0 early on.

Yet, the kick was much too low and was deflected by Denico Autry, bouncing all the way back to the Dallas 44-yard line. Maher ran to the ball and fell on it, but the ball squirted out and eventually Darius Leonard recovered the ball. He initially ran it back for a touchdown, but was later ruled down. Nevertheless, in one play the Cowboys went from being up 3-0 to sending their defense onto the field already in their own territory. It was a huge tone-setter early in the game.

Jamize Olawale drops an easy touchdown, brings up fourth down

After giving up the touchdown to the Colts on their first drive, the Cowboys offense got rolling again. Ezekiel Elliott was picking up chunks of yards and Dak Prescott was moving the chains effectively. They got down to inside the 10-yard line and had a chance to take the momentum back with a game-tying touchdown.

On third and one at the Indianapolis three-yard line, Dak took a shotgun snap and found fullback Jamize Olawale wide open in the flat for what would have been an easy six points. Prescott lofted the ball and it should have him right in his hands, but Olawale simply let it slip right through his hands. It brought up a fourth and one, and the Cowboys made the correct call to go for it, but were stuffed on their rush attempt, making it two trips into scoring range with zero points to show for it.

Noah Brown gets shoved out of bounds, but no flag means the drive dies

The Cowboys offense was once again on the field and trying to make this the drive where they actually scored points. They were moving the ball and reached the Indianapolis side of the field again, getting to the 37-yard line. On second and nine, Dak threw a deep bomb down the sideline to Noah Brown but it fell incomplete.

It looked as if there was contact on the route, and upon replay it became clear that the defender had shoved Brown out of bounds before the ball had arrived. If it had been called, the Cowboys would have gotten a first down inside the five, but instead it brought up a third and nine. Dak would get sacked on the next play, killing the drive and pushing them out of field goal range.

Despite the Cowboys’ three scoreless trips into Indianapolis territory, they were still down by just a touchdown, and the defense was starting to play like themselves again. But the Colts were trying to run a two-minute drill and get more points on the board before halftime.

With just 48 seconds left in the half, the Colts were faced with a third and ten at the Dallas 42. All Dallas had to do was get a stop here and prevent a score. Luck ended up throwing an incomplete pass that Anthony Brown was covering, and for a moment it looked as if Dallas would survive a dismal first half with just a touchdown deficit. But then the flags came out, and Brown had been called for defensive holding, which gave the Colts a first down. Six plays later, Adam Vinatieri kicked a field goal and the Cowboys went into the locker room down 10-0.

The Colts received the ball to start the second half, and the Cowboys defense needed to come out and get a stop. Down 10-0, it was going to take improved play from the defense and massively better play from their offense. Yet, the Colts started out by running the ball right down Dallas’ throat with success. Running back Marlon Mack and Andrew Luck ran three times for 29 yards to get the ball to the Dallas 46 before facing their first third down of the drive.

On third and four, the Cowboys needed a stop here. Giving up the first down would likely put the Colts into position for at least a field goal, and giving up points was something they just couldn’t afford. As Luck took the snap and surveyed the field, coverage appeared to be great. But running back Nyheim Hines snuck out of the back field and caught the ball before turning up field for 19 yards. This seemed to break the defense’s spirit, as they gave up a walk in touchdown run two plays later. Suddenly down 17, the offense came out demoralized as well, and any energy the Cowboys may have had coming out of the locker room had been sucked out of the stadium completely.