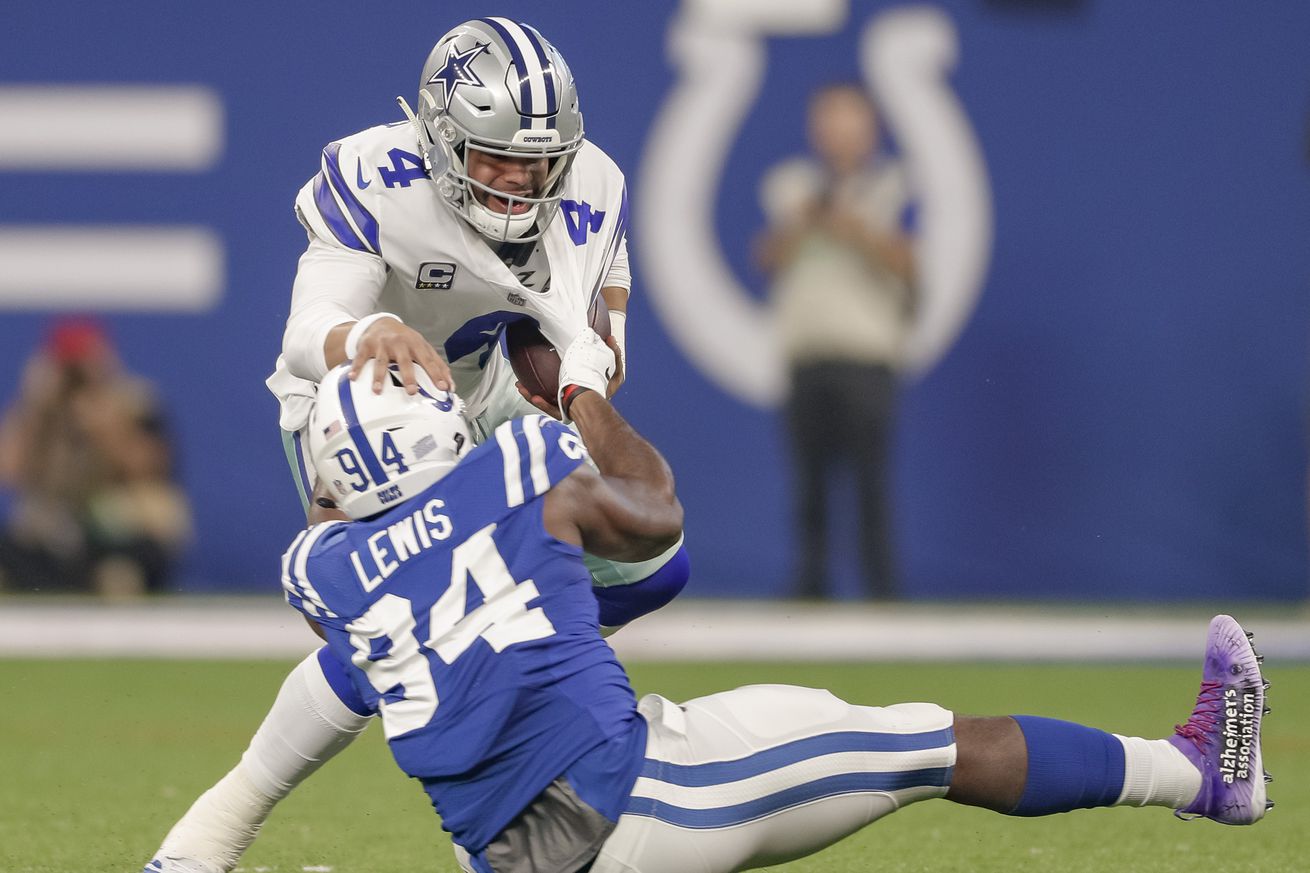 Let’s take a look at the tape to see what the Cowboys need to do to improve on offense.

When your offense is 31st in red zone scoring, 26th in points per game, and 21st in total yards, the issues are for real and likely wide spread. It’s been frustrating to watch the Cowboys offense over the last few weeks and how easily they will move the football before getting into the red zone and bogging down. When taking a look at the tape, we can point the finger at so many different players and/or coaches that it’s not even worth singling them out. Instead, let’s take a look at the tape to see how they can improve, and what’s been the issue on the offensive side of the ball.

Before we get into the film, I want to point out that Scott Linehan wasn’t terrible on Sunday. Matter of fact, in the first half I thought he was actually really good. So let’s start with some positives.

What a brilliant play design from Scott Linehan here on third and one from the three-yard line. Ezekiel Elliott starts out outside and motions to fake the jet sweep hand off. As you can see from the video of the play, the Colts defense focus is solely on Ezekiel Elliott and Dak Prescott rushing the football. With 80% of the Colts defense thinking the ball is either going to Elliott, or that Prescott will be pulling the ball and rushing it, Jamize Olawale and Blake Jarwin are as wide open as it gets for an easy six points. Dak takes the lay-up and floats an easy touchdown to Olawale, only for the fullback to alligator arm the ball, and barely get a fingernail on it. Olawale has proven over his career to be a reliable receiver, and this is just very disappointing to watch from a player who has made much tougher catches in his career.

After calling a brilliant play call that failed due to poor execution, Linehan decided to come back with a questionable play call on fourth down. The Cowboys roll out in 13 personnel needing just one yard on fourth down. While the decision to run the football was the right one, running the football into a nine-man box is tough, especially knowing who was calling the defense on the other side. With the issues along the offensive line, the Cowboys have to get away from welcoming defenders into the box by lining up tight ends in-line to block and instead utilize more spread options. Still, this is the frustrating part. This play could have worked! Joe Looney shoots immediately for the second-level and Connor Williams picks up the player that La’el Collins is going to block, allowing an unblocked player to knife into the backfield and blow up the play. Either Looney or Williams blew the assignment. Questionable play-call with poor execution ends up a bust.

The end-around from a bunch set is a brilliant design that worked nicely here, and Scott Linehan deserves credit for creativity. As we mentioned in the introduction, this play is an example of poor execution. If Connor Williams is able to execute a successful block on Anthony Walker, Amari Cooper has a chance to take this to the house. It seems that on a high percentage of Linehan’s good play calls, someone missed a block, couldn’t finish a play, or ended up making a boneheaded penalty.

Here’s another nice play call that was unsuccessful due to Matt Eberflus calling a nickle-blitz at a perfect time. Linehan has Allen Hurns and Amari Cooper run go-route’s on the outside to free up the middle of the field for Cole Beasley to run a double move. As you’ll notice, Beasley is WIDE open when coming out of his break, but before he can get his head back around, Dak Prescott is being forced to get rid of the football by the blitzing cornerback. While the Cowboys were able to complete the pass and pick up some yards, this is six points waiting to happen if the opposing team doesn’t dial up the perfect play call at the perfect time.

These next two plays are a serious issue and one that is really frustrating to watch. These are back to back plays (2nd and 9 and 3rd and 9) with 30 seconds left in the third quarter trialing 20-0. While it’s unlikely, this game is still in somewhat reach if the Cowboys can get in the endzone quick. As you’ll see the Colts defense is playing a cover two look which is taking away anything to the deep third of the field, and anything shallow-medium to the boundary. With this look the Cowboys need to have some route attacking the intermediate-deep middle of the field (post, dig, slant). Instead, we see a lot of what we’re used to. Stop routes (curls, comeback, hitch), with Elliott running a sneak route off the tackle. It didn’t work, and that’s okay, but let’s take a look at the next play call, against almost identical coverage.

The Cowboys call almost identical play that failed the snap before on third and nine. The Colts are showing the same safety look, except the linebackers are showing pressure pre-snap. The play-design is bad, but Prescott also fails to recognize an open Beasley. This is a situation where Prescott has to trust his arm and receiver and let the ball go. He holds it a beat too long. The pressure eventually breaks through which forced Prescott to scramble away from pressure. Once he he tries to deliver the football he is being tackled from the backside and the play dies.

While the game was pretty much over at this point, this is just the epitome of a give up play call. On fourth and 14, Linehan calls a slot-bubble screen to Allen Hurns that doesn’t even give the offense a chance to pick it up. If this is the play call we get on fourth and 14, there’s no reason to have the starting players on the field or to use your timeouts at the two-minute warning.

As we mentioned in the introduction, you could go through every one of these clips and pick someone different at fault in every clip. With the way the offensive line is playing, Linehan has to make adjustments to his route tree. The league is turning more into a “dink and dunk” league, and working on getting the football out fast, while spreading defenses out looks to be the key to success in these next two weeks. But it doesn’t all fall on Linehan, he did a nice job in the first two drives calling creative plays to get his skill players the football, but unfortunately that went away after the Olawale drop, and the hold they called on Tyron Smith on the Amari Cooper screen.

It hasn’t been pretty on the offensive side of the football, but the Cowboys have a good matchup this Sunday against the Tampa Bay Buccaneers, who have struggled immensely this season defending opposing offenses between the 20’s, but especially in the red zone. If the Cowboys struggle to get in the endzone this Sunday, Cowboys Nation will have a lot to complain about.