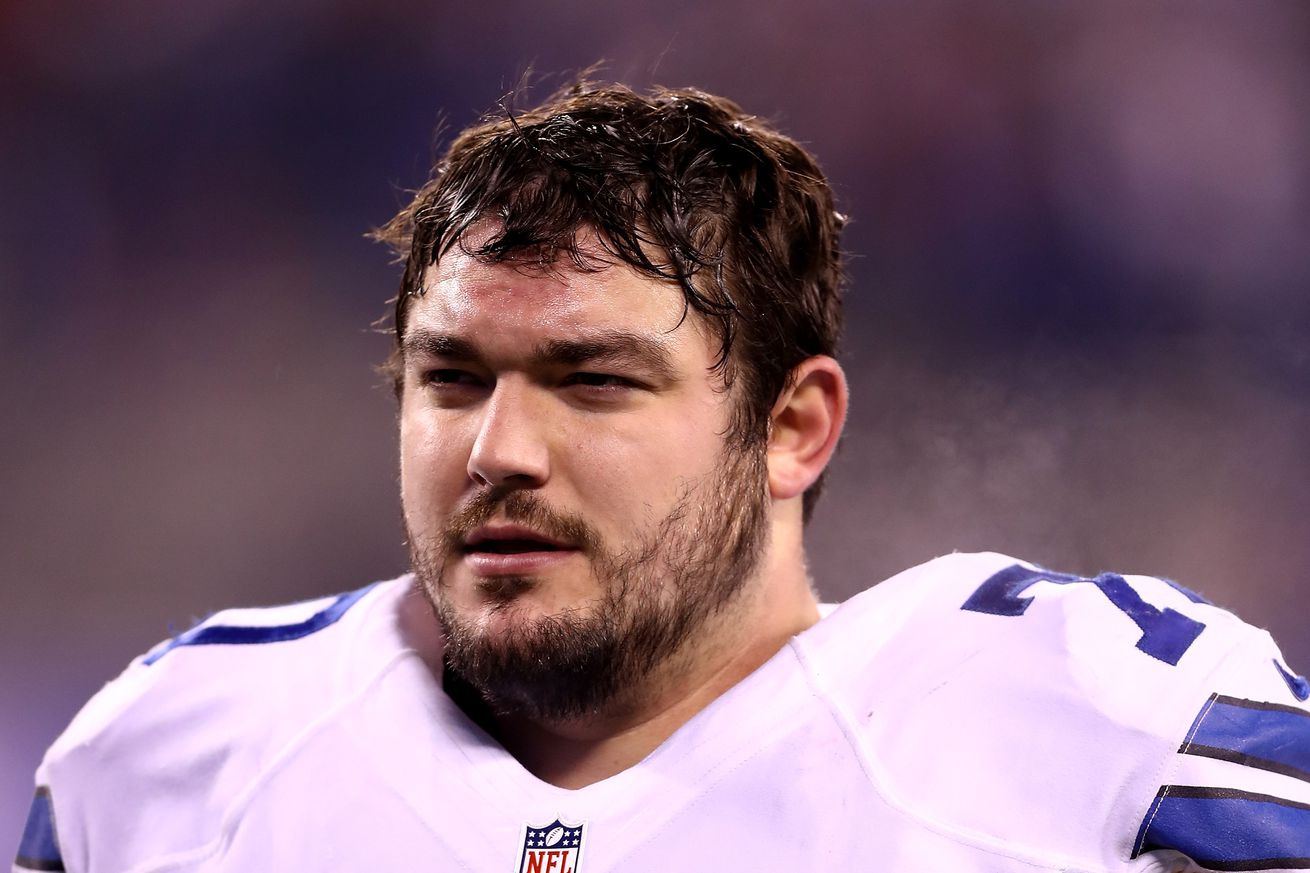 Plus a last look at the debacle in Indy and a peek at the Bucs.

Practice Update: Injured O-Linemen Improving – DallasCowboys.com staff
When the Cowboys returned to practice leading up to the Buccaneers game, all eyes were on Zack Martin, the biggest one to watch. More importantly, the team is now down to only three players who did not practice, Martin, David Irving, and Geoff Swaim.

Martin missed the first game of his career last Sunday against Indianapolis and rookie Connor Williams started in his place.

Cowboys LG Xavier Su’a-Filo was limited as he rehabs his eye contusion but he went through individuals, wearing a protective visor, to work up a sweat.

The Marinelli Report, Week 15: Cowboys miss tackles and lose battle at the line — and ultimately, the game – Bob Sturm, The Athletic
It is painful to look back at last Sunday’s debacle. But it was simply horrible in all facets.

These games do happen, of course, and it was simply one of those days. But a defense that was walking on water and being labeled as “elite” met its match on Sunday and was quickly humbled. It just shows you that in this league, nobody cares what you have done. They are still going to line up and challenge you each week.

The Cowboys went hard at the Saints and did not fear them. Well, the Colts felt the same way on Sunday. They hit the Cowboys in the mouth. Hard. And they did not get much of a response.

I can’t imagine anyone on that defense giving themselves a grade higher than an “F.” The standard is significantly higher than what they put out there Sunday.

What Do The Cowboys Really Have Left To Prove? | Cory Mageors, 105.3 The Fan
This is a long list of things, and it starts at the top of the staff.

So what do the Cowboys really have left to prove in the regular season?

Jason Garrett must prove that he can get the machine back on. Say what you want about a road loss to a quality opponent that team looked asleep from the get, and they never woke up. Garrett will be tasked with finding at least one more spark for his team to get back to a winning streak that is maybe five games long.

Scott Linehan has to prove that this offense can do something other than run up and turn around on a consistent basis. While the product with Ezekiel Elliott as the feature star is awesome, they need to be able to sustain the drives and finish in the red zone.

Dallas Cowboys: Have Cowboys been exposed as pretenders? | Clarence Hill, Jr., Fort Worth Star-Telegram
This is another list with multiple valid entries, starting off with a real biggie.

The Cowboys were 0-2 in the red zone against the Indianapolis Colts. The dropped touchdown pass by fullback Jamize Olawale at the 1 remains one of the defining images of the game. But it also typifies the team’s season-long struggles in the red zone because of bad play calling or poor execution.

The Cowboys rank 31st in the league with a red zone conversion rate of 44.19 percent, scoring only 19 touchdowns on 43 trips in 2018. That number is 18.18 percent over the last three games, so they are trending in the wrong direction at the wrong time.

This is the main reason they are averaging just 19.7 points per game, which ranks 26th in the league and is least among division leaders by almost six points.

Considering that the Cowboys have the league’s leading rusher in Ezekiel Elliott, it’s difficult to understand why they struggle so much. But predictable play calling, breakdowns up front with a banged-up offense line, penalties and poor execution continue to doom the Cowboys when they get down close.

Flip Side: Dealing With Mike Evans’ Size? – Bryan Broaddus, DallasCowboys.com
A look at some Tampa Bay players to watch includes their big (in every sense of the word) gun on offense.

The one constant about the Buccaneers with Jameis Winston under center is their willingness to throw the ball down the field. One of the major reasons for this attitude is due to Mike Evans on the roster.

When it comes to big play players, Evans is one of the best in the league. His size and reach make him difficult to deal with. These Cowboys defensive backs faced similar size earlier in the season when they matched up against Carolina and Detroit.

Dealing with size is one thing, but having to deal with a guy that has reach is a whole different problem. I have studied games where defenders have been in position on Evans, only to have him go over the top of them or reach around their backs for the reception.

Despite Drop Blake Jarwin Emerging for Cowboys Passing Game ✭
Enough with the negative waves, Moriarty. Here is a positive for the Cowboys, the recent good play of tight end Blake Jarwin.

Over the last two weeks, Jarwin has caught 11 passes for 101 yards and has become a favorite target of Dak Prescott’s.

Against the Philadelphia Eagles in week 14, Jarwin caught seven passes for 56 yards. In the week 15 loss to the Indianapolis Colts Blake Jarwin was targeted by Prescott seven times, which tied Amari Cooper and Cole Beasley for second in the team behind Ezekiel Elliott. Jarwin’s four catches were also tied with Cooper and Beasley for second as well.

Jarwin has had a couple really nice games in a row. He dropped an important pass on Sunday that could have put the Cowboys in good position to score later in the drive, but even on the drop he showed a ton of athleticism that should have Cowboys Nation excited about his potential.

Dallas Cowboys: Film room: 3 Cowboys who have shown the most improvement this season, including WR Michael Gallup | John Owning, SportsDay
Even more good news on the tight end front, where rookie Dalton Schultz is showing a lot of improvement as a receiver and especially as a blocker.

At the beginning of the season, Schultz was of little use to the Cowboys, which is a big reason why he was inactive from Weeks 2-6, as he struggled to make any discernable impact as a blocker or receiver.

Since Week 11, where Geoff Swaim sustained an injury that has kept him off the field ever since, Schultz has looked like a totally different player, developing into Dallas’ best blocking tight end while showing improvement as a receiver as well.

Schultz has developed most as a blocker, as he was consistently dominated at the point-of-attack and struggled to latch onto his targets in the run game during the early stages of the season. Truthfully, Schultz was a liability in the run game; however, in recent games, Schultz has been one of the more reliable blockers for Dallas’ ground game.

Cowboys meager special teams unit could soon see a big boost – Patrik (No C) Walker, 247 Sports
Special teams have been a big problem for the Cowboys, particularly in their lack of any success returning the ball. But the improving health of Tavon Austin and the possible activation of C.J. Goodwin from IR might provide some answers there – and they need to find some.

For Goodwin, the 21-day window expires on Jan. 9. That would fall after Wild Card weekend and assuming Cowboys finish the job and get into the playoffs, it’s doubtful they’ll wait until after the first game to make a final ruling on him. If he looks good in the next few days or so, they’ll pull the trigger. Being a potential special teams’ ace in his own right, Goodwin is a convert from wideout who ran a 4.31s 40-yard dash pre-draft, a notch faster than Austin’s 4.34s burst. Adding the former to the fold could give the Cowboys the ability to scale back Austin to WR duty only, a move that could preserve his health going forward.

The other option would be to split return duties, designating one as a kick returner and the other exclusively to punts. It’s a mix they tried with now-released Deonte Thompson, but got negligible results from. Considering how unimpressive the return game has been for the Cowboys, getting one of these players back should change things, but getting both back could be a very big deal.

The 16 biggest Pro Bowl snubs of 2019 – James Brady and Christian D’Andrea, SBNation.com
The Pro Bowl is perhaps more a popularity contest than anything, so of course some deserving names get left off. And that includes the Cowboys’ own super-rookie.

There really should be three inside linebackers nominated to the Pro Bowl, because Luke Kuechly and Bobby Wagner have certainly been great this season. But Vander Esch has been the saving grace of a banged up Dallas defense, and he’s been flying all over the field all season. He does everything extremely well, and while picking one of those two to kick out in favor of Vander Esch is a tall order, him not making it is a shame. The rookie is third in the NFC in tackles and has two interceptions to go with seven pass deflections.

Homegrown talent is key, proven by makeup of 2019 Pro Bowl rosters – K.D. Drummond, Cowboys Wire
The five Cowboys to make the Pro Bowl provide more evidence of how well the team has been drafting for several years now, with four of them being former first rounders and the fifth, Demarcus Lawrence, a player the Cowboys traded up in the second round to get because they had a first round grade on them. And if you think that should be the norm for high draft picks across the league, well, it isn’t.

It’s easy to say, well of course they found success in those picks, it’s what a team is supposed to do. Sure, but when taking a look at the number of recent first rounders who have never made a Pro Bowl appearance in their careers, it furthers the idea that the recent haul for Dallas is truly special. Here’s a tally of how many recent first rounders have yet to make an all-star appearance.

Marc Colombo brings the energy back to Cowboys’ offensive line – Todd Archer, Dallas Cowboys Blog- ESPN
A really good profile of the man the Cowboys turned to when the O line issues threatened to derail the season, Marc Colombo.

At 40, Colombo is the NFL’s youngest offensive line coach. He said said he uses things he has learned from all of his line coaches — Tony Sparano, Bill Callahan, Pollack and Alexander — and added some things he believes work well.

“I know football one way, all right, and that’s with passion, energy, emotion and enthusiasm,” Colombo said. “That’s the way I do it and I have a group that just feeds off that. I love every one of those guys. I’m fortunate to coach those guys and they respond. I coach them hard. We do more detailed technique work than any other unit in the NFL and they just want more and more. That want to get more looks. They want to get more individual time. They feed off that. That’s where get our strength from, just outworking everybody.”