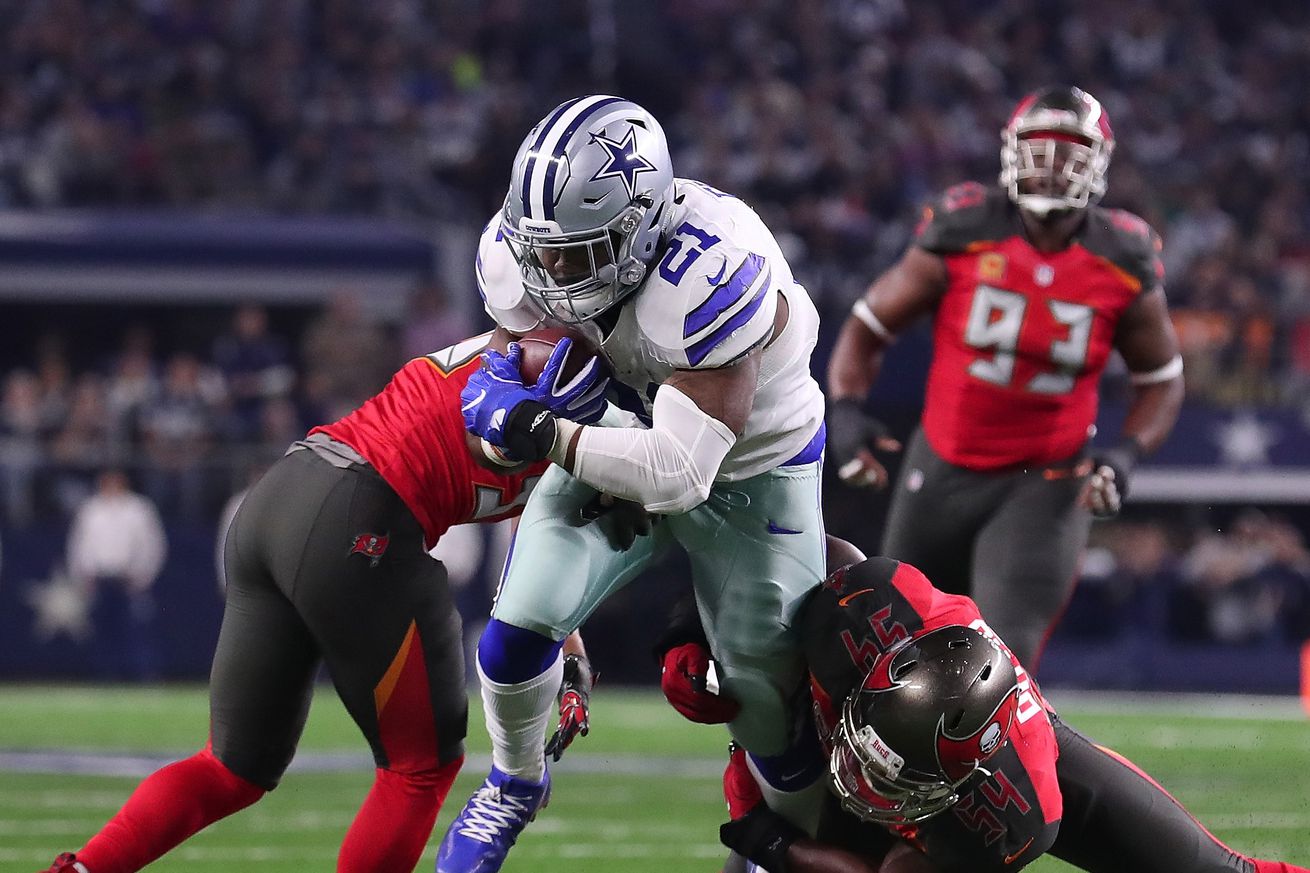 Here are five things to keep an eye out for when the Cowboys host the Buccaneers.

For the second time in as many weeks, the Dallas Cowboys will attempt to clinch the NFC East. Hopefully, it goes much better this time around as they came up empty last week against the Indianapolis Colts. This week’s opponent is the Tampa Bay Buccaneers. The Bucs share a distinct honor with Cowboys as the only two teams who have beaten the league’s number one team, New Orleans Saints. Tampa Bay did it in Week 1 and the Cowboys did it a couple weeks ago after the Saints had reeled off 10-straight victories.

These two teams are headed in different directions as Dallas is trying to return to the playoffs after missing the dance last season, whereas the Bucs haven’t been to the playoffs since 2007 when Jon Gruden was still their coach. Can the Cowboys pull off the win and take down the East or will the Bucs prolong the agony? Here are five things to look for when these two teams square off on Sunday.

Cowboys Ezekiel Elliott leads the league in rushing with 1,349 yards, nearly 100 yards more than the second-place guy, Todd Gurley. Even more impressive than Zeke’s yardage totals is that he’s done it while going up against some of the toughest run defenses in the league. But that all changes these last two weeks of the season as he’ll square off against two of the weaker run defenses in the league, starting with Tampa Bay on Sunday.

Not only are the Bucs suspect at stopping the run, but they’ve also gotten better at pass defense. After allowing an average of 355 yards through the air on defense over the first five games, they’ve since had six games where they’ve held teams to less than 200 yards passing, including the New Orleans Saints a couple weeks ago. Tampa Bay’s defense is showing improvement and one of the reasons for this is that the team is finally getting contribution from their first-round draft pick Vita Vea.

Vea won in the trenches constantly going against the Ravens’ interior offensive line and the team’s run-heavy offense. He totaled seven tackles in run defense, including four stops and one tackle for no gain. He was also the first to make contact with the ball carrier on 15.8% of his run-defense snaps, which was good for the ninth-highest percentage among qualifying interior defensive linemen in Week 15.

With the Cowboys interior offensive line dealing with injuries, the battle in the trenches is going to be one to keep a close eye on. Dallas must get their running game going and look for them to leverage off their star running back early and often.

While establishing the run will be the Cowboys MO on offense, stopping it is a must on defense. Tampa Bay is ranked 28th in the league with 97.7 rushing yards per game. Third-year running back Peyton Barber is the team’s leading rusher and he’s averaging only 3.8 yards per carry this season. After Marlon Mack’s 139-yard performance against the Cowboys defense last week, it’s going to be important for Dallas to show they still have one of the top run defenses in the league by shutting down Tampa Bay.

But stopping the Bucs ground attack is just one part of it. The Cowboys defense will need to keep them from picking up big plays through the air. Guess which team has the most passing yards per game this season? Mahomes’ high-powered Chiefs? Nope. The Los Angeles Rams or the New Orleans Saints? Nope. It’s the Buccaneers.

Now, the first thing that comes to mind is that Tampa Bay is always playing from behind and this is a volume stat. While some of that is true, the Bucs are third in the league in yards per passing attempt, so they move it through the air pretty good regardless of how much they’re throwing it.

One of the reasons they have so many passing yards is that they have several reliable receivers on the team. They have four WRs with 650+ receiving yards this season, including star receiver Mike Evans who leads the way with 1,328 yards. In contrast, the Cowboys only have one receiver (Amari Cooper) with over 650 yards. And the Bucs also get good production out of their tight ends. O.J. Howard is on injured reserve and has missed the last month, but he still has 565 yards receiving on the year, which is still more than all Cowboys players not named Amari. Cameron Brate is now getting all the targets at TE for Tampa Bay now.

The good news for the Cowboys is that they have a solid group of four corners who can handle the Bucs pass catchers, but they are going to have to reduce their penalties and limit big plays if they want to stop Tampa Bay’s passing attack.

Even when the Buc’s get their yards, it doesn’t always translate to wins. Tampa Bay has had five games where they’ve had over 500 yards of offense, but they’ve lost all but one of them. Why is that? They are terrible at protecting the ball.

The Bucs love throwing the ball, but they do not discriminate in who they throw it to. Sharing is caring. The Cowboys defense must capitalize on this. If errant passes are up for grabs and Cowboys defensive backs don’t come down with the ball, these missed opportunities can prove costly. The Cowboys can’t let that happen. We know of one guy who sure loves to pick off Jameis Winston and the Buccaneers.

Every time a bell rings an angel gets his wings.
And every time he plays the Bucs, Jeff Heath gets a pick.

Heath has 8 interceptions in his career. 3 have come against Tampa Bay.

Cowboys fans weren’t sad to see former New York Giants edge rusher Jason Pierre-Paul get traded to Tampa Bay in March. Not having to face that guy twice a year is always a plus, but they’ll have to see him on Sunday with his new team. The Bucs are giving him $15.5 million a season to rush the quarterback and he’s done a good job. He’s had 11.5 sacks this season, but also has 50 tackles, 14 for losses. He has 19 quarterback hits, two pass deflections, a forced fumble and a fumble recovery. It’s good enough to earn his third Pro Bowl appearance.

The Cowboys will counter one veteran Pro Bowler with one of their own as Tyron Smith will have the chore of slowing down JPP. Smith has struggled in his two games since returning from injury and is having a big problem blocking without holding. Smith has had some tough battles this year on the left side but Pierre-Paul will be right up there with the best of them. The Cowboys will need a good game from the veteran left tackle to keep Dak’s sack total from escalating even higher.

Speaking of old divisional foes, DeSean Jackson spent his first nine seasons in the league playing for the Philadelphia Eagles and the Washington Redskins. He’s spent the past two seasons with Tampa Bay. Despite missing the last three games with a thumb injury, Jackson is one of those receivers over 650 yards for Tampa. In fact, he has 750 yards on the year, trailing only Evans. He could be making his return on Sunday.

#GoBucs WR DeSean Jackson is hopeful to play Sunday at Dallas after missing three games with a left thumb injury.

It is with great pleasure that we bring you the news that the Tampa Bay Buccaneers have the absolute worst red zone TD percentage defense in the league! Yay! Rejoice, the Cowboys are scoring touchdowns on Sunday!

Well, hold up a second, let’s not go jump in the kettle just yet. The next two worst red zone defenses are Houston and Atlanta and let’s not forget the Cowboys scored 16 and 22 points against them respectively. The Cowboys squandered opportunities in both those games to get red zone touchdowns.

For Dallas, the problem isn’t their opponents as it is themselves as their problems scoring in the red zone have been self-inflicted. Dropping passes, committing penalties, or taking unnecessary sacks are just some of things they’ve done in past weeks to cause them to settle for field goals. The good news is – these are things they can can fix themselves, but playing against a weaker red zone defense doesn’t necessarily mean solutions are coming. It doesn’t hurt though. Nobody is going to roll out the red carpet for the Cowboys offense, but hopefully they can get themselves back on track. Scoring points is certainly important and this team better figure things out quickly. If they struggle to punch it in against the Bucs, that’s going to be very alarming going forward.

What things will you be watching on Sunday?