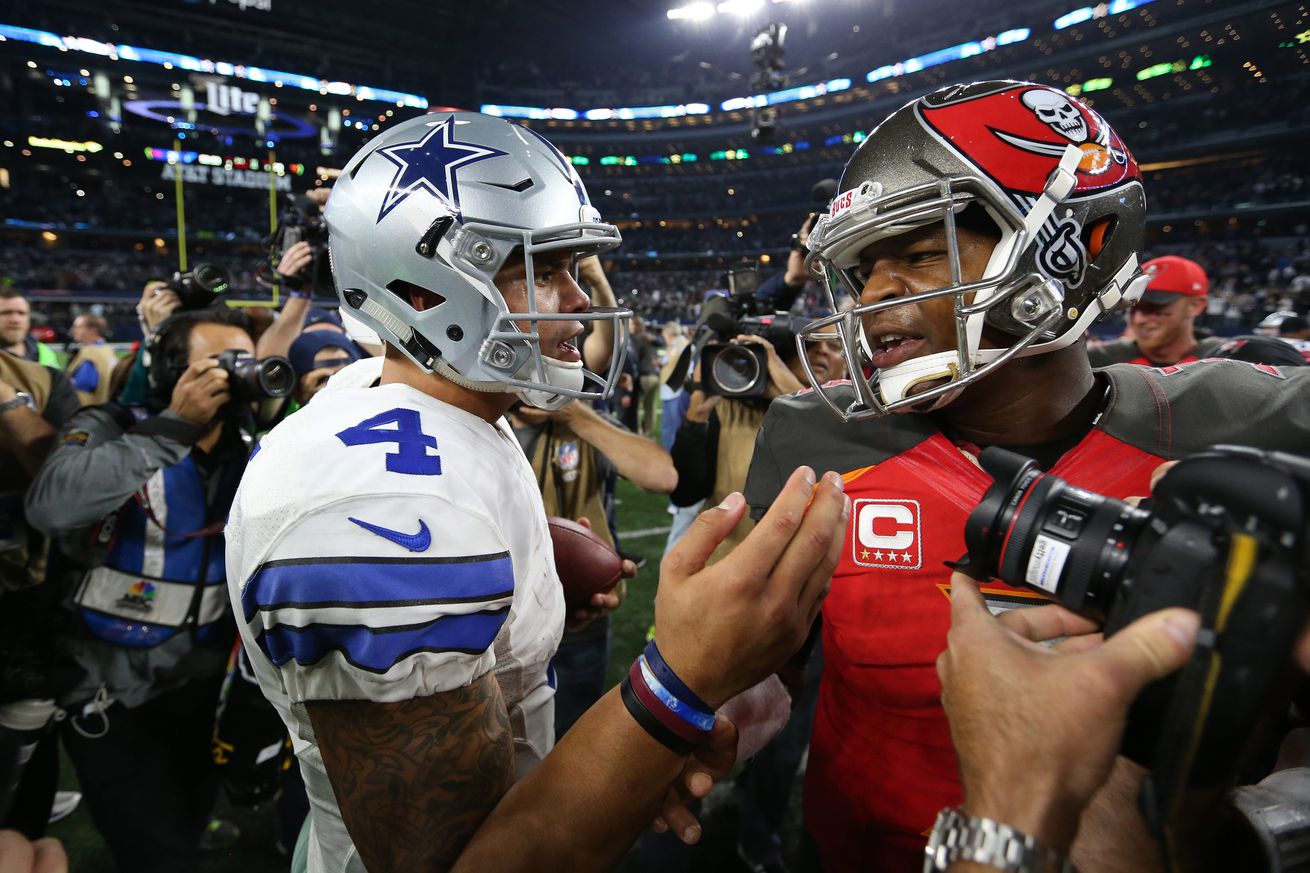 Cowboys up 27-13 after Randy Gregory recovers a fumble and offense scores.

Facing 2nd and 12 at their own 23, Winston and Barber fail to execute the hand off and it’s a FUMBLE. Randy Gregory scoops it up and is down at the Bucs’ 4-yard line! Two plays later, Dak to Michael Gallup for the TOUCHDOWN!!! Dallas now 2-3 in the red zone.

HELLO SWEET TOUCHDOWNS WE HAVE HEARD OF YOUR EXISTENCE pic.twitter.com/PMnvIZqZzT

The Bucs’ get a huge 33-yard run by Peyton Barber but there are flags all over the field as the Tampa offense picks up their fourth holding call of the game.

Dak Prescott goes back to his old friend Cole Beasley as they march down the field and into the red zone. On 1st and goal from the Tampa-3 yard line, Zeke gets nothing. On 2nd and goal, a jet sweep to Amari Cooper loses 7-yards. On 3rd and goal, from the 10, Beasley only gets to the 2-yard line. Dallas elects for the 20-yard field goal instead of going for it. The Cowboys lead is back up to 7 but a wasted opportunity against the worst red zone defense is disappointing.

The Buccaneers offense makes quick work of the Dallas defense knocking on the door of another red zone opportunity. DeMarcus Lawrence answers the call with a SACK that puts Tampa Bay back to the Dallas-40. Winston skips a ball off the ground on 3rd and 18 as the field goal crew rolls out. The 53-yard attempt is NO GOOD!

The Cowboys start the third with the ball but come out flat. After Zeke fumbles, he is bailed out by Dalton Schultz who falls on it. On 3rd and 5, Dak can’t connect with Zeke and the offense stalls again against one of the worst defenses in football.

This officiating crew is living up to their reputation…

Refs called 13 total penalties for 103 yards in the first half https://t.co/sMh47jvP3S

That call gifts the Buccaneers with an easy goal-to-go opportunity that Jacquizz Rodgers cashes in, cutting the Dallas lead to four points. Just an extremely egregious half of officiating. Cowboys can’t do much with the time left as Dak is sacked to take us to halftime.

As Joe Buck and Troy Aikman are criticizing the call, we get another awful flag just a few plays later.Xavier Woods comes across and connects on a shoulder hit to Adam Humphries but is called for unnecessary roughness and the boos are even louder.

RT if this is the worst call of all time pic.twitter.com/UBstxAmXZl

The Buccaneers will get another opportunity and the officiating is handing out Christmas gifts to Tampa Bay. First, they call Randy Gregory for a roughing the passer as the boos rain down.

On a wide-open look to Blake Jarwin, Dak is a little behind him but Jarwin has to make a catch that hits his hands. Dak finds Elliott on 3rd and 13 but he only gets eight. Brett Maher steps out for a 59-yard field goal attempt, he drills it. Cowboys lead 17-6 with less than two minutes in the half. The Dallas offense is starting to stall once again.

Zeke only gets three on first down but Dak finds Amari Cooper for eight to convert. On 3rd and 3, Prescott and Gallup aren’t on the same page as Dallas will punt. Pinned deep, the Buccaneers pick up a delay of game on 3rd and 10. On 3rd and forever, the “Hot Boyz” collapse the pocket and Maliek Collins SACKS Winston. The 13-yard punt return by Cole Beasley sets the Cowboys up in Tampa Bay territory.

On the ensuing Cowboys drive, Ezekiel Elliott needs four to convert on 3rd down but can only get one yard on the short pass. It’s the first punt of the game and it takes a favorable bounce to the 21-yard line where Bucs will begin. It’s a short stay for the Buccaneers offense as Winston sails it on 3rd and 5 as Cowboys defense forces a three and out. Cowboys get the ball up 14-6 with under six to play in the half.

A 7-yard gain on 1st and 10 is negated by a Tampa hold, they are able to overcome it with another defensive hold by the Cowboys. As the Bucs sniff the Cowboys red zone, the offense moves backwards with an illegal block. They aren’t able to move much more but they do get the 45-yard field goal to cut Cowboys lead to 8 points.

The Bucs get help from the Cowboys as the first quarter ends with another offside penalty on Daniel Ross.

Several plays later, facing 3rd and 5, Gregory redeems himself as he strip-sacks Winston. Jaylon Smith scoops it up and goes 69-yards untouched for a TOUCHDOWN!!! The Dallas defense gives the home team a 14-3 lead!

On the next Buccaneers’ possession, the Cowboys almost get off the field on third down but an offside call on Randy Gregory keeps the drive going.

Cowboys get another break when rookie DT Vita Vea is called for a facemask that negates a Tampa Bay sack. Now, in the red zone, Dak Prescott keeps it and it’s a Cowboy red zone TOUCHDOWN!

THE COWBOYS HAD THE BALL IN THE REDZONE AND SCORED A TOUCHDOWN pic.twitter.com/DZF48w4eDQ

A few plays later, the offense is called for illegal blocking on Allen Hurns. 1st and 20 is no problem for the offense as Ezekiel Elliott takes a short pass for 10, followed by a screen to Amari Cooper to set them up near the red zone.

The Cowboys offense start with decent field position but a couple of miscues lead to 3rd and 12. Dak Prescott looks for Michael Gallup deep and it’s a 32-yard completion to keep their first drive going.

On the third play, Jameis Winston fires a deep shot to Mike Evans for 38-yards and the Buccaneers set up shop in the red zone. Tampa Bay is called for holding on first down, setting them outside of the red zone one play later. The Bucs cannot capitalize on third down but are able to take a three-point lead.

Cowboys special teams off to a shaky start after letting Tampa’s first possession start at their own 38-yard line. Two plays in, the Bucs convert with a new set of downs but we have an injured Cowboy, it’s Tyrone Crawford. The cart is out as the medical staff is bracing Crawford’s back and stabilizing him to be cautious. As he is carted off, Crawford waves to the Cowboys fans.

The Cowboys won the toss and DEFERRRED!!

Jourdan Lewis will start at slot cornerback and Taco Charlton is out of the dog house!

After last week’s debacle, the Dallas Cowboys look to get back on track against the Tampa Bay Buccaneers on Sunday. Dallas has a chance to redeem themselves by beating the Bucs and capturing the NFC East division and the number four seed in the NFC playoffs.

This is a game the Cowboys have to win as they don’t want to go on the road in Week 17 still needing a victory to close out the division. They will want to rest their players that week, and the one way to be sure of doing that is win on Sunday. Of course, losses by Washington and Philadelphia would do the trick, but if the Cowboys back in after losing to the Bucs, their confidence would surely be shattered.

Tampa Bay is struggling and look like they are going to go through a total revamping after the season. Rumors are already circulating that head coach Dirk Koetter will be fired so the morale over there should be low. Still, even a struggling NFL team can be dangerous and Dallas has to take care of business. This would be a very good week to get their red zone offense back on track.

What You Need To Know