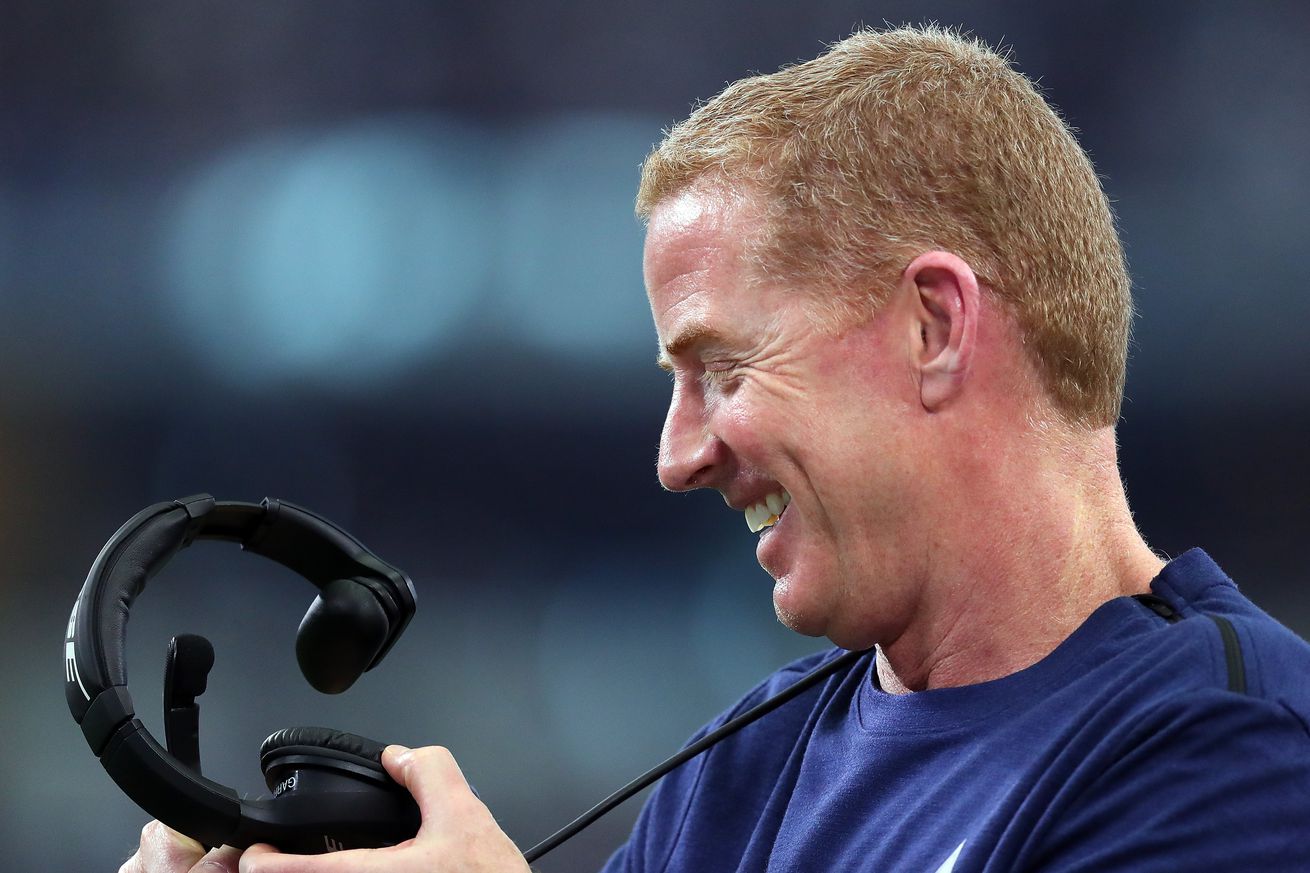 Merry Christmas Cowboys Nation, here is your present… the news!

Confident Cowboys seek more than NFC East title – Herbie Teope, NFL.com
The number one objective for every NFL team entering the regular season in to win their division. Consider the objective met.

One of an NFL team’s primary goals entering a season is to win a division title, which ensures a postseason berth.

The Dallas Cowboys accomplished the goal Sunday with a 27-20 win over the Tampa Bay Buccaneers, marking the third time in the past five seasons that the Cowboys have won the NFC East.

”It’s important,” Cowboys head coach Jason Garrett told reporters after the game, via the Cowboys’ official webstie. “It’s the first goal that you have, the first tangible goal that you have with your team is you want to win the division first and get in the playoffs. So, we accomplished that goal.”

The Cowboys, however, aren’t satisfied with just the division championship hats and T-shirts.

”Certainly, something we can be proud of,” Garrett said. “But hopefully, it’s just the start of something.”

NFC East is Something To Clap About – Nick Eatman, DallasCowboys.com
Two month’s ago discussion centered on the end of the Jason Garrett era. Now, well, the talk is a bit different. Eatman notes how the Cowboys’ head coach led the turnaround.

You don’t have to love head coach Jason Garrett to appreciate what he has been able to do. You can make fun of his clapping on the sidelines and his stoic facial expressions.

But trust me, he’s doing something right. These players could’ve easily gone in the tank on several occasions, especially when it was 3-5 after the Tennessee game. And it looked last week that they might be heading that way again.

From everything I’ve heard over the last week, though, Garrett sent a rather stern message to his team. It sounded like he called out a few of them who might’ve appeared more focused about off-the-field merchandise and apparel.

He called out just about everyone for playing a game that looked nothing like the previous five weeks that got them to this point.

And Garrett basically told them to get their backs back against that proverbial wall and come out hungry.

I know I often say this, but style points cannot be redeemed for free coffee anywhere. This is a win-or-lose league that simply totals up your results and renders its judgement. It isn’t based on highlights or perfect moments. It is simply judged by sending two teams on to the field each week for three hours of physical confrontations that end with one grabbing (and sometimes eating, Jameis) that “W.” If you do that six times in seven weeks, you go on a surprising run that takes you from a 3-5 record to clinching the division before Christmas.

That, with all of its warts, is an accomplishment worth applauding. Yes, there is much to be done and plenty to clean up. But this team — one of the NFL’s youngest — has just won another division title. This is far from the dizzying heights that they desire and that you demand, but it is pretty darn impressive given where we sat two months ago.

Smile. Your team is pretty good. I’m not sure where that takes you in January, but it will definitely take you to January in a league where 20 of the 32 teams will shut off their lights in six days’ time.

We talk about what a great time it is to be a quarterback or wideout in the NFL, because of the explosion of the passing game. And it is. But the versatile backs that have entered the league in the last four drafts have been huge impact players too.

We’re seeing an explosion of versatile backs, and they’re all kids. Among active players, each of the NFL’s top active running backs in yards from scrimmage since the start of the 2017 season are 25 or younger, and four haven’t turned 24 yet. Using the marvelous tools of Pro Football Reference, ranking the yards-per-scrimmage leaders among backs over the past two seasons in order, ranked by average yards per touch (age in parentheses):

That’s not including the banished Kareem Hunt, 23, who would slot right beneath McCaffrey on this list.

One more note about the list I find significant: Gurley, McCaffrey, Gordon and Elliott were drafted in the first half of their first round of their drafts (10th, 8th, 15th and 4th overall, respectively). The top guy on the list, Kamara, was a third-round pick, 67th overall, by the smart-shopping Saints, by GM Mickey Loomis, coach Sean Payton and personnel czar Jeff Ireland.

Whether he plays or not, the Cowboys star running back likely has won his second rushing title in three years. The only time he didn’t win it was last season when the NFL suspended him for six games, and Elliott still led the NFL in rushing yards per game.

Elliott has 1,434 rushing yards this season. That is 183 more than Rams running back Todd Gurley, who didn’t play Sunday and could remain on the sideline in Week 17. Rookie Saquon Barkley is 236 yards behind Elliott, and Barkley plays the Cowboys on Sunday. He had 11 carries for 28 yards against the Cowboys in Week Two.

Randy Gregory Rises Above In Career Game – David Helman, DallasCowboys.com
It’s been a long strange journey for the Cowboys’ Randy Gregory. Sunday he enjoyed his best day as a pro and his teammates ( as well as the team’s owner) seemed to take pride in Gregory’s growth as a person and a player.

Randy Gregory stood atop his locker, surveyed the crowded locker room around him and smiled.

He didn’t have much to say. Gregory declined to speak with reporters after what was easily the best game of his NFL career. But then, with DeMarcus Lawrence singing his praises two feet away, he didn’t really need to.

“Shout out Randy Gregory for attacking the quarterback all day long and staying after it,” Lawrence said. “I’m just proud to see him growing up as a young man in America.”

The phrase “growing up” feels awfully fitting for the 26-year-old defensive end. Of all of the 53 men who helped the Cowboys capture the NFC East this season, none of them was less likely to be here than Gregory, who spent much of the last two years serving NFL suspensions.

On Sunday, the Cowboys’ ability to clinch the NFC East title with a win against the Tampa Bay Buccaneers would have been much more difficult without Gregory and Smith.

Scout’s Eye: The Physicality Of Xavier Woods – Bryan Broaddus, DallasCowboys.com
The Broad one gives us his scout’s eye judgment on Sunday’s victory.

Xavier Woods continues to impress me with his willingness to step up and deliver a blow, regardless of the situation. I wrote about his textbook hit on Adam Humphries last night. His shot on Cameron Brate might have been even better, because it knocked the ball loose. Woods timed his run perfectly and struck Brate in the ribs with his right shoulder as he was attempting to secure the ball. Jaylon Smith was right there for the assist and Antwaun Woods was on the ball just in case the officials had ruled a fumble on the play.

I like what I saw from Dak Prescott, adjusting the protection by bringing Dalton Schultz back in line to help with the blitz by Javien Elliott. Prescott saw that he didn’t have enough blockers to handle the blitz, so by making the adjustment Schultz was able to take Jason Pierre-Paul. That allowed Prescott the time he needed to get the ball outside to Cole Beasley for the pitch-and-catch first down.

Jerry Jones said no rest for Cowboys in finale – Clarence Hill, Fort Worth Star-Telegram
How will the Cowboys approach a “meaningless” week 17 game against the Giants? Hill gives us some insights.

“If guys are injured, obviously they aren’t going to play,” coach Jason Garrett said. “If guys are able to play we’re going to play them. We’ve got an important ball game in New York next week.”

A week after being shut out in a 23-0 loss to the Indianapolis Colts, the Cowboys managed just two touchdowns, one coming via a 4-yard drive following a forced fumble on defense.

They got field goals of 69 and 20 yards from Brett Maher. The former came right before half on a drive that netted five yards on four plays. The latter was the result of another disappointing turn in the red zone for a team that ranks second-to-last in the league in touchdowns inside the 20 and last among playoff teams.

Elliott had 18 carries for 85 yards but also had two fumbles, both recovered by the Cowboys. It was his second straight game under 100 yards.

Vince Verhei: Randy Gregory was a second-round pick in 2015 whose career thus far has been ruined by multiple drug suspensions — he came into today with only 26 games played and no starts. But the Cowboys have stuck with him, and he just showed why — when Jameis Winston holds the ball, Gregory is able to chase him down from the back side and swat the ball free. Jaylon Smith recovers and returns it 69 yards for a touchdown. Add that to an earlier touchdown when Dak Prescott kept the ball on a zone read (which was set up by a sweet pass to Michael Gallup for a big gain down the sideline), and the Cowboys lead 14-3 at the end of the first quarter.

Cowboys got a 59-yard field goal by Brett Maher to go up 17-6, but the Buccaneers answered with a 75-yard touchdown drive. Jacquizz Rodgers scored on a short run, but the real story was the penalties — Tampa Bay got one first down on a Gregory roughing the passer call that I guess was a shot to the head. And then Xavier Woods got called for a shot to the head that was actually shoulder-to-shoulder, but that was hard to tell at full speed.

The Cowboys are recalling cornerback C.J. Goodwin from injured reserve heading into Week 17.

Cowboys coach Jason Garrett spoke to reporters on Monday and confirmed the news. The team signed Goodwin in October for his ability on special teams, but he played in just two games before breaking his forearm.

To make room on the active roster, the Cowboys are releasing wide receiver Lance Lenoir. The second-year wide out was promoted from the practice squad back in November, but the potential return of Tavon Austin has lessened the need at the position.

“Particularly if Tavon is able to come back this week, we’ll need less receivers,” Garrett said.