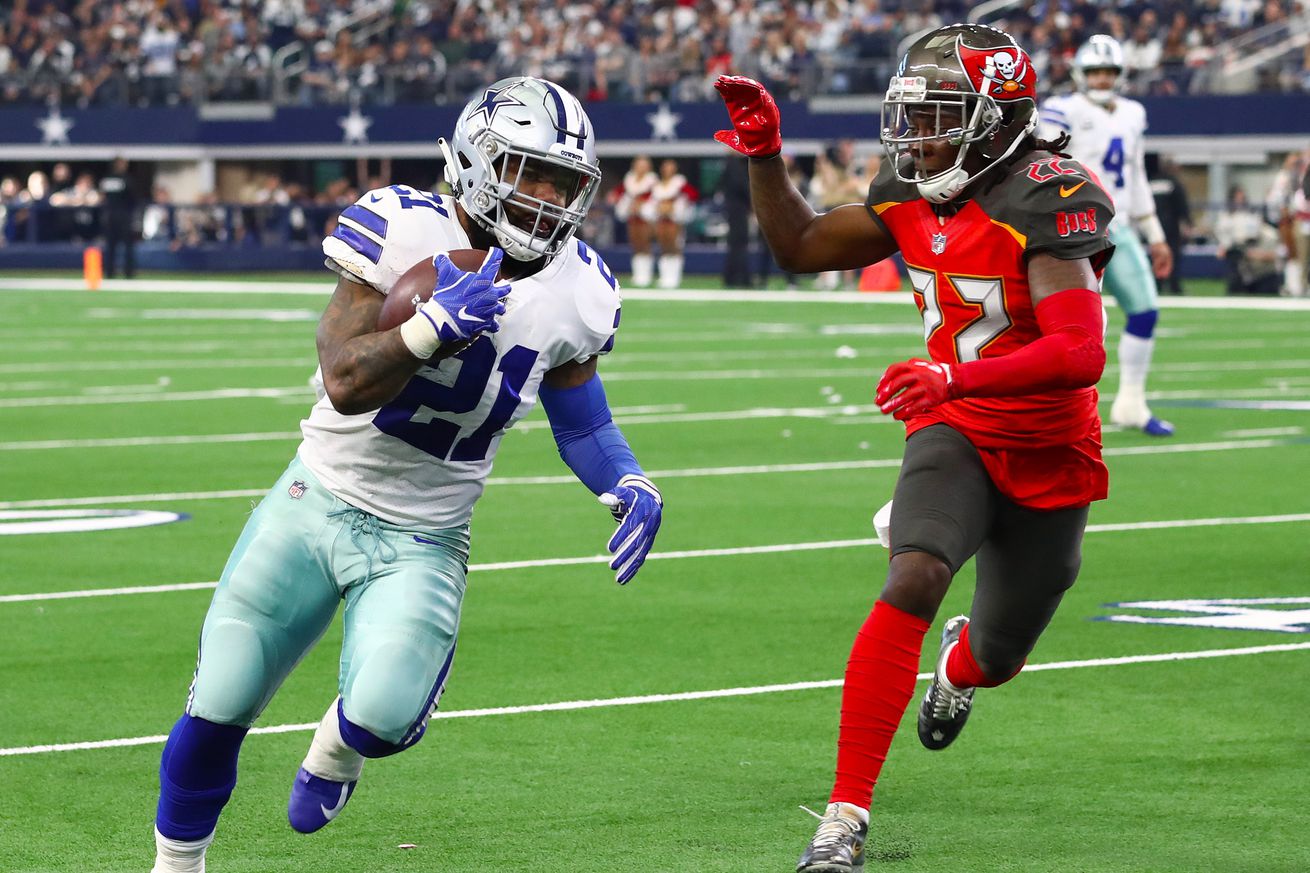 Plus the rest of the Cowboys news.

Ezekiel Elliott says Cowboys taking a week off vs. Giants is ‘not even an option.’ Are we sure about that? – David Moore, SportsDay Dallas
After the Cowboys won Sunday’s game and clinched their division, the Bears scored a victory of their own. That locked Dallas into the fourth seed in the playoffs, meaning a win next Sunday would do nothing to improve the Cowboys’ seeding for the playoffs. Naturally, questions about sitting players arose and Ezekiel Elliott shut them down fast.

The Cowboys practice and prepare to win whether they use their best players or not. The difference is in personnel, not semantics.

Prescott wants to play. So does Elliott, who was held out of the final regular-season game two years ago when the Cowboys were in this position.

How Will Garrett Handle Week 17 Playing Time? – Staff, DallasCowboys.com
The NFC East is locked up, but Jason Garrett and the Cowboys have made it clear that they want to maintain their momentum in this Week 17 matchup against the Giants.

Jason Garrett spoke to reporters on Monday following the win, and he said that – with the obvious exception of injury concerns – he plans to prepare for Sunday’s trip to the Meadowlands as if it were any other game.

“From the outside, people will say there’s nothing to gain from this game based on where we are, where other people are, what our seed may or may not be,” Garrett said. “But to us it’s just about going to work this week and practicing the right way and then going to play the right way.”

“I want to play, and I think a lot of these guys in here want to play as we talk about things that we want to get better on, we need to improve” said Dak Prescott. “This is a good game for us to do it, against a good team that has been playing better football in the later part of the season.”

It’ll ultimately be up to Garrett to see how they handle their injury concerns.

“Zack is one that you certainly have to keep an eye on and see how he does with all the work that he got in the ball game. Tyrone Crawford is the obvious one that we had,” he said. “But for the most part, everybody else seemed to do fairly well. We’re still monitoring where Anthony Brown is based on the back injury from last week. So we’ll see what his availability is as the week goes on. But for the most part it was a fairly clean game.”

Cowboys plan to play Giants like it matters, but what about the second half? – Stefan Stevenson, Fort Worth Star-Telegram
The Dallas Cowboys want to finish strong but also remain healthy for the playoffs.

Another inconsistent offensive performance in the 27-20 in over the Tampa Bay Bucs gave them plenty of stuff to work on against the Giants, but it’s a good bet most of their cornerstone players won’t see any second-half action in the Meadowlands.

[It’s about] trying to getting better, not only on offense, but on defense and in the kicking game,” he said. “It’s an opportunity to improve our team.”

“But for the most part, everybody else, we’re going to prepare as well as we can prepare and go play the best game we can play up there in New York on Sunday,” he said.

Ezekiel Elliott eclipsed 2,000 yards from scrimmage on Sunday, likely to finish with rushing crown – RJ Ochoa, Blogging the Boys
Ezekiel Elliott has achieved a lot of important and memorable milestones in the three short years he’s been in the NFL, but on Sunday’s division clinching win over the Tampa Bay Buccaneers the star running back managed to pull off something he hasn’t done before.

The Cowboys have been using their all-world running back far more in the passing game this season, a topic we discussed ahead of the Tampa Bay game. Entering that game Zeke needed 108 yards against the Buccaneers to get 2,000 yards from scrimmage this season and as fate would have it he churned out 109.

Zeke became the first player in the NFL this season to crack 2,000 yards from scrimmage this season. Carolina’s Christian McCaffrey needs 75 yards to hit 2k in their season finale, and New York’s Saquon Barkley could hit it with 114 yards against the Cowboys.

Grading all 32 first rounders after Week 16 – Mark Chichester, Pro Football Focus
Chichester takes a look at the overall grades for every first-round rookie after the 16th week of the regular season and has LVE as the highest-graded player on his list.

As he has been the case for the majority of his rookie season, the Cowboys’ first-round pick was incredibly productive in Sunday’s game. He racked up a staggering 13 solo tackles, eight of which resulted in a defensive stop, en route to an overall grade of 80.3 — his fourth-best single-game grade of the year.

Dallas Cowboys bigger Wild Card threat: Seahawks or Vikings? – Michael H Vu, The Landry Hat
The Cowboys know two things: they’re going to the playoffs, and they’ll be the fourth seed. That means they’ll be playing the fifth seed, but right now it’s unclear which team will hold that fifth seed. It could be the Seahawks or Vikings, and there’s some debate over which of those two teams would be the preferred matchup.

Quarterback Russell Wilson is having an MVP type season. His 112.7 quarterback rating is the highest mark of his career. Wilson is in his seventh season. He has 3,296 passing yards, 34 touchdowns to just six interceptions.

Does an NFC East title guarantee Jason Garrett will be back next season? Not necessarily – Matt Mosley, SportsDay Dallas
Jason Garrett was at one point thought to be a certainty to be fired at the end of the 2018 season when the Cowboys fell to a 3-5 record and looked dead in the water. But a miraculous turnaround has the Cowboys in the playoffs and looking like a dangerous team, so Garrett’s job should be safe. Maybe not though.

If the Cowboys get bounced on wildcard weekend, Jones could try to keep Garrett and throw Scott Linehan overboard. It’s been reported that Garrett thought about firing Linehan when he dismissed offensive line coach Paul Alexander during the bye week. The trade for Amari Cooper galvanized the Cowboys in some ways, but the inefficiency was still there in Sunday’s game. It took a couple takeaways by the defense to put points on the board. Otherwise, the offense looked pretty stale. Replacing Linehan might appease fans and allow Prescott to have a new collaborator. Could that be a blast-from-the-past like Norv Turner? Or it might involve Garrett taking a more active role in the offense, which wouldn’t exactly light anyone’s fire.

There’s also chance Jones could finally say goodbye to Garrett, whose decent win-loss record has been undermined by his lack of postseason success. Other coaches with his track record not named Marv Lewis would’ve been fired years ago. There’s certainly some good things that come with continuity, but if Jones is in love with a young coach like Kris Richard, now might be the time to pull the trigger. I don’t think there’s any way that Lincoln Riley wants this job right now, in case you were wondering. There is one coach who loves to come out of retirement, and his name is Urban Meyer. But that also seems far-fetched.

Folks trying to fire a head coach that was the leader of a team that went from 3-5 and dead to NFC East champions ON CHRISTMAS. Y’all can’t chill for a damn day?

Get ready for a whole lot of coaching changes, and more from Week 16 – Jason La Canfora, CBSSports.com
Holiday season or not, the number of fired coaches is likely to be at least seven and perhaps reach double digits.

By Monday morning, there could be more teams officially on the look for their next sideline boss. Conversations with executives, coaches and agents around the league this week revealed a strong sense that the Packers and Browns would not be alone, for long, as NFL teams with interim head coaches in place.

The Cardinals, Broncos, Jets and Bucs have known, internally, for a while now that change is inevitable for 2019. The Jaguars will be making changes as well, it’s just a matter of how many. The Bengals, eventually, will have a head coach other than Marvin Lewis, and the Panthers and Dolphins owners have been chatting with confidants for a while now about making potential moves there as well.

Randy Gregory Rises Above In Career Game – David Helman, DallasCowboys.com
Gregory is a player who possessed a lot of talent but faced several off-field problems. It was a bit of a gamble when the Cowboys drafted him, and Dallas took several more gambles by sticking with him through multiple suspensions. Now, Gregory is getting it together, both on and off the field, and Jerry Jones is proud of that.

When asked for his reaction to this game, Jerry Jones started talking about Randy Gregory almost immediately.

If you know anything about the journey Gregory and the Cowboys have been on since draft night in 2015, you know why. #cowboyswire pic.twitter.com/14hnnK9kbz

Dak Prescott got the ball out quick vs. Bucs – @JoriEpstein
Dak Prescott has had his fair share of struggles this season, and a lot of people have pointed to the fact that he often holds onto the ball too long. That was not the case on Sunday, as Prescott was getting the ball out quicker than anyone else in the league.

Dak Prescott took 2.14 seconds on average to throw vs. Bucs, the fastest of any QB this week per @PFF

On season, 29 QBs have thrown faster than Dak’s 2.66 seconds average

Jerry Jones: ‘Our team is a postseason team’ – Todd Archer, ESPN
The Cowboys may not be the top seed in the playoffs, but they can be seen as the most dangerous playoff team given the hot streak they’ve been on lately. Jerry Jones seems to believe that this iteration of America’s Team has what it takes to make a run in the playoffs.

“I certainly think we’re playing the kind of really good football that you can win games in postseason,” owner and general manager Jerry Jones said. “Any of the teams can win the game. We right here had the Giants come right up the backside and win the championship [in 2007]. I think our team is a postseason team.”

Those Giants finished 10-6 and did not enter the playoffs as hot as these Cowboys, who have won six of their past seven games, but the Giants beat the top-seeded Cowboys in the divisional round of the playoffs and then won the NFC Championship Game at Lambeau Field against the Green Bay Packers.

New York pulled off the mother of all upsets by beating the New England Patriots in XLII.

This thread is a graduate seminar in football. Read it carefully and earn your PhD… https://t.co/E0C0r1kdxS