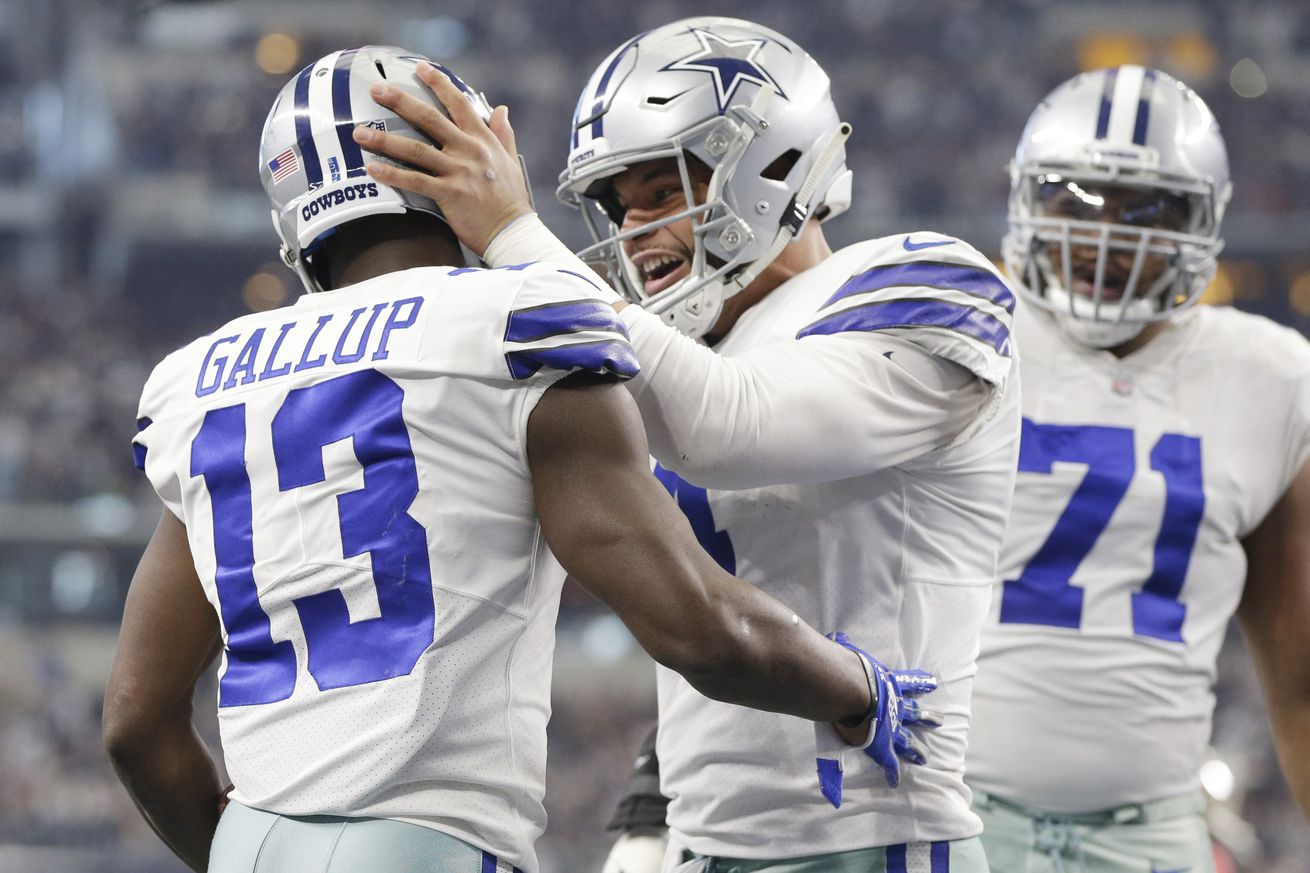 LVE is a tackling machine and Michael Gallup found the end zone.

The Dallas Cowboys turned around its season in a big way — going from a 3-5 record to a divisional title with a week remaining in the regular season. For the second time in three seasons (and the Dak and Zeke era), the Cowboys are NFC East champions and will host a playoff game.

A big part of that is because of the play from the rookies. Will McClay and company have done a fantastic job of finding and identifying talent in the draft, and this latest class has been no exception. The Cowboys have an instant impact player at linebacker and a wide receiver that continues to impress on the outside.

Let’s check in on how the rookies performed in the playoff-clinching victory over the Buccaneers.

Leighton Vander Esch has been a better player than the vast majority of people expected. The uber-athletic linebacker flies to the football and rarely misses a tackle, making him a key piece to a fast and talented defensive unit. Vander Esch uses his sideline-to-sideline speed and long arms to wrap ball carriers up and prevent them from getting key first downs to keep drives alive. If partner in crime Jaylon Smith is the lightning, Vander Esch is the boom — making tackle-after-tackle.

Sunday was no exception. LVE continued his impressive rookie season, proving that he can be relied upon week-after-week. With Sean Lee inactive, Vander Esch recorded 15 total tackles on the day — 11 of which were solo. His special ability to make open-field tackles is especially important, as it allows the defense to get off of the field and put the ball into Ezekiel Elliott’s hands — err, legs.

One of Vander Esch’s more impressive plays of the game did not result in a tackle for the rookie. Check out LVE absolutely destroying poor Ryan Jensen:

It goes without saying that the Cowboys will be relying on its star rookie linebacker in the playoffs. Fortunately, it does not appears as if Vander Esch is slowing down any time soon.

Connor Williams brought a lot of excitement when he was drafted with the 50th overall pick, but the rookie has had his up and downs this season, which is to be expected. After an injury sidelined him, the Cowboys decided to roll with Xavier Sua’Filo at the left guard spot, and that hasn’t changed since.

With Sua’Filo also having some struggles, it is certainly not out of question that the Cowboys decide to go back to the rookie lineman. Whether it’s as a starter or a player in the rotation, Connor Williams has the talent to be a contributor on this team as the season progresses.

Cowboys fans were hopeful that its third-round selection would grow into a WR1 in the future. While Gallup still has some ways to go, it is clear that the rookie out of Colorado State has the talent to be a key piece on a playoff team.

We have all been frustrated about the Dak-to-Gallup failures in recent weeks, but the connection took a big step in the right direction on Sunday. Prescott found his rookie target three times for 51 times and a touchdown, resulting in over 17 yards per play on the day. Dak was able to find Gallup deep down the sideline on a beautiful pass that was nicely placed between two defensive backs for a 31-yard gain:

This might be Dak’s best throw of the season. pic.twitter.com/bfgnWwoJbr

Then, Dak hit Gallup in the corner of the end zone for six points — something you would like to see more of when the Cowboys get down in the red zone.

HELLO SWEET TOUCHDOWNS WE HAVE HEARD OF YOUR EXISTENCE pic.twitter.com/PMnvIZqZzT

All-in-all, it was a good day for Michael Gallup. The first-year wideout has been getting open, so it was only a matter of time for him to get his share. Hopefully we see the Prescott-Gallup connection grow in the upcoming weeks.

Dorance Armstrong has quietly had a solid season for the Cowboys, adding depth in the defensive line rotation and making plays when asked to. No, he does not get the attention that DeMarcus Lawrence gets or the hype and excitement that Randy Gregory generates, but the rookie from Kansas has been a quality player for Dallas during his rookie season.

Unfortunately, the rookie was inactive for Sunday’s game. Perhaps the decision to play Taco Charlton — after being absent for some games — played a role in the Cowboys opting to sit its first-year end. I would certainty like to see some more of Armstrong in the playoffs.

The tight end position entered the season with a ton of question marks. How would the Cowboys be able to fill the void left by the future Hall of Famer, Jason Witten? Geoff Swaim was playing very well, but the questions have not gone away — especially with the Cowboys shutting down Swaim due to a wrist injury.

Dalton Schultz has had some nice moments in the tight end rotation, but he has also had some rookie mistakes — such as missing a block on Jason Pierre-Paul on the play that was designed for Amari Cooper near the goal-line.

On the flip side, Schultz did make an important play on Sunday that may have flown under the radar, especially since Dallas ultimately got the win.

Mark that play!!!
Dalton Schultz recovers a Zeke Elliott fumble that could have turned this game on its ear.#TBvsDAL

The Cowboys are likely hoping that the fourth-round rookie can be a contributor as the Cowboys prepare for postseason play. If the Stanford product can be a plus on the field, it will only mean good things for this offense.