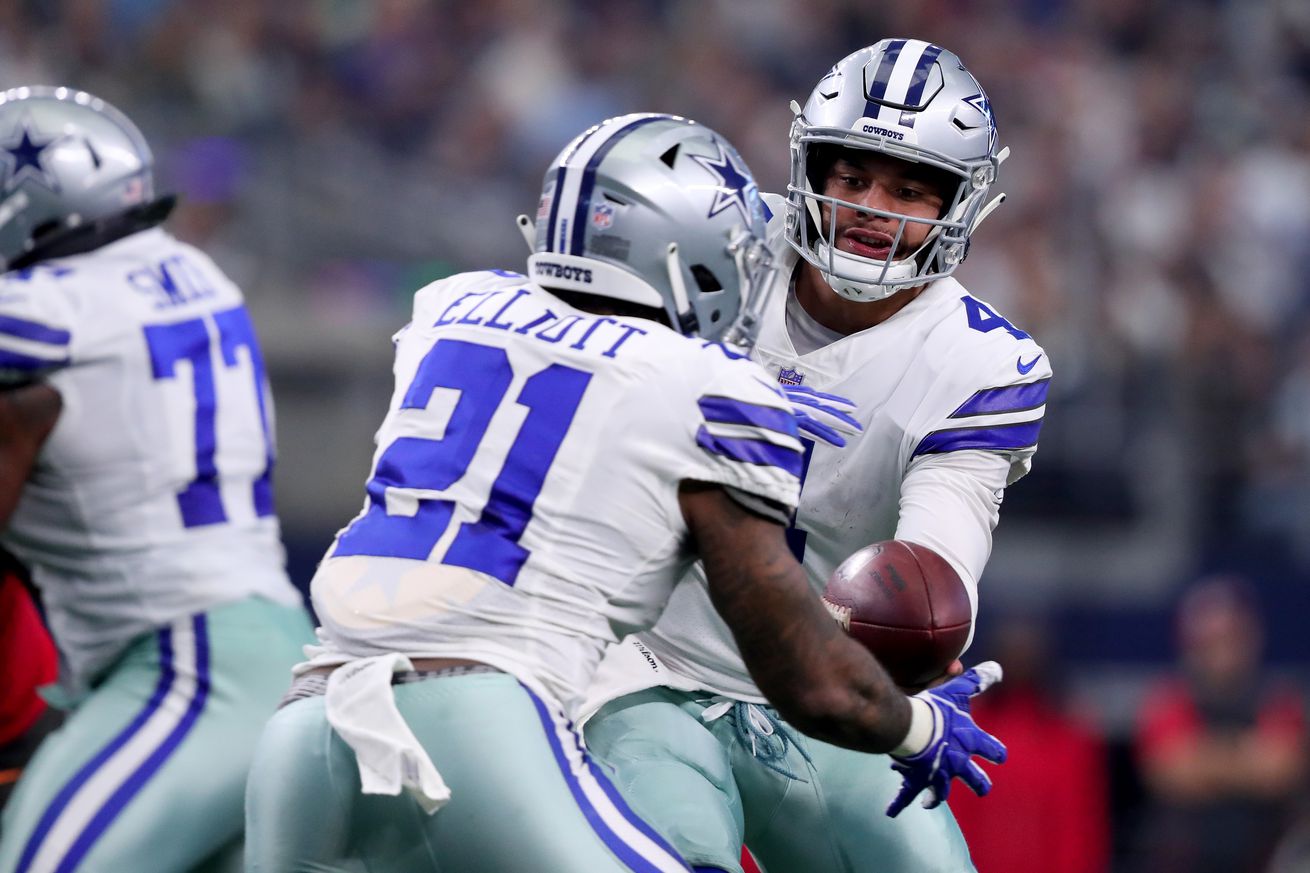 Playing starters to get or stay sharp, or sit them to rest and heal?

The last time that the Cowboys were playing for something in Week 17 was the 2013 season, when the Eagles came to Dallas for a winner-takes-all division showdown. But with Kyle Orton playing for an injured Tony Romo, the Cowboys didn’t have enough to get the job done.

In fact, before the 2014 season, high stakes were the trend in the finales. As we painfully remember, Dallas had a shot at the playoffs in all of Jason Garrett’s first three full seasons as head coach. But all three years ended with disappointing letdowns and 8-8 records.

But since then, Dallas has either secured or sunk their playoff spot before Week 17. Three of the last five seasons (2014, 2016, 2018), the Cowboys have already clinched the NFC East and couldn’t help or hurt their playoff positioning in the final regular season game.

Dallas Cowboys: Ezekiel Elliott says Cowboys taking a week off vs. Giants is ‘not even an option.’ Are we sure about that? – David Moore, SportsDay
To rest or not to rest. That is the question.

The Cowboys practice and prepare to win whether they use their best players or not. The difference is in personnel, not semantics.

Prescott wants to play. So does Elliott, who was held out of the final regular-season game two years ago when the Cowboys were in this position.

“We can’t afford to take a week off,” Elliott said. “That’s not even an option.”

More arguments exist to sit or manage key players than to let them take the field against New York. It’s unrealistic to believe one game will jump-start a sputtering offense, especially a game in which you have no intention of unveiling any wrinkle or scheme you hope to use in the postseason to catch opponents by surprise.

Jerry Jones on playing starters vs. Giants – Jon Machota, SportsDay
Jerry Jones dropped some more Jerryspeak. Figure out what it really means if you can.

“Our experience has been that we’ve played smart, if you will, in a game that has no standing implications and I don’t think we’ve played well,” Jones said on 105.3 The Fan [KRLD-FM]. “Now, we’ve avoided the injury in the past by playing that way.”

Jones said the players who won’t play “are going to be pretty obvious,” meaning the ones dealing with injuries. He agreed that All-Pro right guard Zack Martin, who has been battling a sprained left knee that he has re-injured three times this season, is one of the Cowboys who needs the extra rest.

Jones also mentioned not wanting to finish the regular season with how things ended offensively against Tampa Bay. Dallas’ offense managed only 232 total yards with 152 coming through the air.

“We have a lot in our playbook that people haven’t seen yet,” Jones said. “You could make a case for showing off some more playbook so [opponents] have more to work on in practices. I don’t think that we’re satisfied with where we are offensively right now, relative to ways that we can utilize.”

To sit or to start? Troy Aikman weighs in on Week 17 debate about key Cowboys players – Staff, SportsDay
Troy Aikman joined the sit-or-start debate on KTCK 96.7 FM The Ticket recently.

”As I’m asked about that, I always just kind of defer to the coaches. I think my job, certainly, is to weigh in on those things. But I know these coaches within the building and the players – they understand the health better than anybody. They understand kind of what needs to happen better than anybody. And I’m interested because I know with the Cowboys, I made the comment during the game [vs. Tampa Bay] that for a team that’s won six of their last seven games, and you would think is rolling into the playoffs, feeling good with a lot of momentum — offensively, that was a tough way to finish up. And I’ll be curious to see what they decide to do [against New York on Sunday].”

Decoding Linehan, Week 16: Cowboys’ conservative blueprint – Bob Sturm, The Athletic
Sturm looks at the Cowboys’ tendency on offense to “sit on a lead”, which is quite interesting in the context of Jerry Jones saying “I don’t think that we’re satisfied with where we are offensively right now”.

There is a massive disconnect between the aggressive style of offense the public desires and the conservative approach Linehan and Garrett take.

Once they get a lead, they sit on it.

Once the Cowboys take a lead, they carefully walk a tightrope where they would rather punt than risk the ball. The game turns into one long four-minute offense where they are simply trying to run clock and get out of dodge. That becomes even more difficult because the opponent picks up on it.

In other words, I know people still point to the red zone offense as the biggest argument to changing the offensive coaching staff. I would argue that this offense should consider a change in architect simply based on how many times they are not actually trying or willing to attack. They take the lead — even if only by 7 or 10 points in the first half — and often try to milk it. There are no additional attacks aside from the very careful screens or other underneath plays that require beating 11 defenders as opposed to one or two.

The play-calling switches fully over to run, run, screen, punt. Meanwhile, Dak Prescott gets accused of being a check-down machine who is scared of any throw down the field. I am here to suggest that he is often being coached this way and perhaps is capable of much more with the proper coaching in his ear. And while this cautious approach is going to navigate choppy waters all the way to the playoffs, it is a method that might neither be pleasant or forward-thinking in the modern NFL.

They are wrapping up most of the coaches reviews this week. Playoffs and how/where they finish the season will be a part of it. See how the chips fall for everyone.

Matt Eberflus, Indianapolis Colts defensive coordinator, 48: Has built a culture in Indianapolis and gotten everyone to play hard on an overachieving defense. Wasn’t on the radar entering the season, but quickly building name recognition in 10th season as NFL assistant.

Cowboys injury updates: Tavon Austin fully participates in practice, could play vs. Giants – Brandon George, SportsDay
Austin was a full participant in practice Wednesday for the first time in more than 10 weeks.

Austin had been limited in practice the last two weeks as he’s worked his way back but wasn’t healthy enough to turn it loose in a game, so the Cowboys held him out against Indianapolis and Tampa Bay. But Jones said he wants to see Austin play in the regular-season finale.

Tyrone Crawford didn’t practice after suffering a neck injury against Tampa Bay that required him to visit a local hospital. A CT scan and an MRI came back negative. Crawford was walking around The Star on Wednesday and said he’s doing better. He’s not likely to play against the Giants but should be back for the playoffs.

Zack Martin won’t play this week but healthy starters will – Charean Williams, ProFootballTalk
Martin is a no-go for Sunday, but the Cowboys continue to insist they will play any healthy starters against the Giants, even if that’s not always been the case in the past.

In 2016, the last time the Cowboys were in a similar situation in Week 17, they treated it like a preseason game. Left tackle Tyron Smith was inactive; running back Ezekiel Elliott, linebacker Sean Lee and left guard Ron Leary dressed but didn’t play; and Dak Prescott played 15 snaps and Dez Bryant 18.

Maher Wins Another Player of the Week Award – Nick Eatman, DallasCowboys.com
Brett Maher was named NFC Special Teams Player of the Week, mostly on the strength of his 59 yard field goal. And it was a rare achievement.

Scramble for the Ball: 2018 All-Rookie Team – Bryan Knowles and Andrew Potter, Football Outsiders
You know which Cowboy made this list.

Leighton Vander Esch has a more clearly defined role on the Dallas defense, but it is no less demanding: be the player that Sean Lee’s hamstrings have recently prevented Lee from being. Vander Esch was drafted in the first round as Lee’s eventual replacement, but not necessarily expected to take over this quickly. He has surpassed expectations to the point that his 2016 All-Pro teammate was inactive in Week 16. Vander Esch has the third-most tackles of any player this season despite only starting three of the team’s first eight games, and was the NFL Defensive Rookie of the Month in November after hauling in interceptions in back-to-back games against the Eagles and Falcons. He may not be the blitzer that Roquan Smith is, or the centerpiece of the defense like Darius Leonard, but Vander Esch has already become one of the league’s most consistent and reliable second-level defenders. He and Jaylon Smith look set to be one of the league’s best linebacker tandems for quite some time.

If you did a re-draft of all the 2018 first-round draft picks based on Pro Football Focus grades, Leighton Vander Esch would be selected #1 overall. pic.twitter.com/v4JWJHdoiW

Cowboys’ Sean Lee needs new team in ‘19 – Adam Schein, NFL.com
Schein looks to the year ahead, identifying nine big-name veterans who could benefit from a change of scenery in 2019. And one of them is General Lee.

I don’t write this with any joy, but it’s time. And everyone knows it. Lee has been a star in this league — he was first-team All-Pro just a couple seasons ago — but he cannot stay healthy. And now the issue is he’s the not even close to being one of the Cowboys’ top two linebackers.

Lee was a healthy scratch for the Cowboys’ Week 15 NFC East clincher, which was equal parts the right move, telling for the future, and sad. Dallas’ second-year LB Jaylon Smith is a star. Rookie LB Leighton Vander Esch is a stud, too. There used to be a direct correlation between Lee’s availability and the ability for the Cowboys’ defense to perform. Now, they are winning and fantastic on defense with Lee as an afterthought. He will get another chance to strut his stuff somewhere else.

Leonard: The telling signs Eli Manning will be back with Giants next season – NY Daily News
Per Ed Valentine, Giants fans woke up on Christmas morning only to find coal in their stockings.