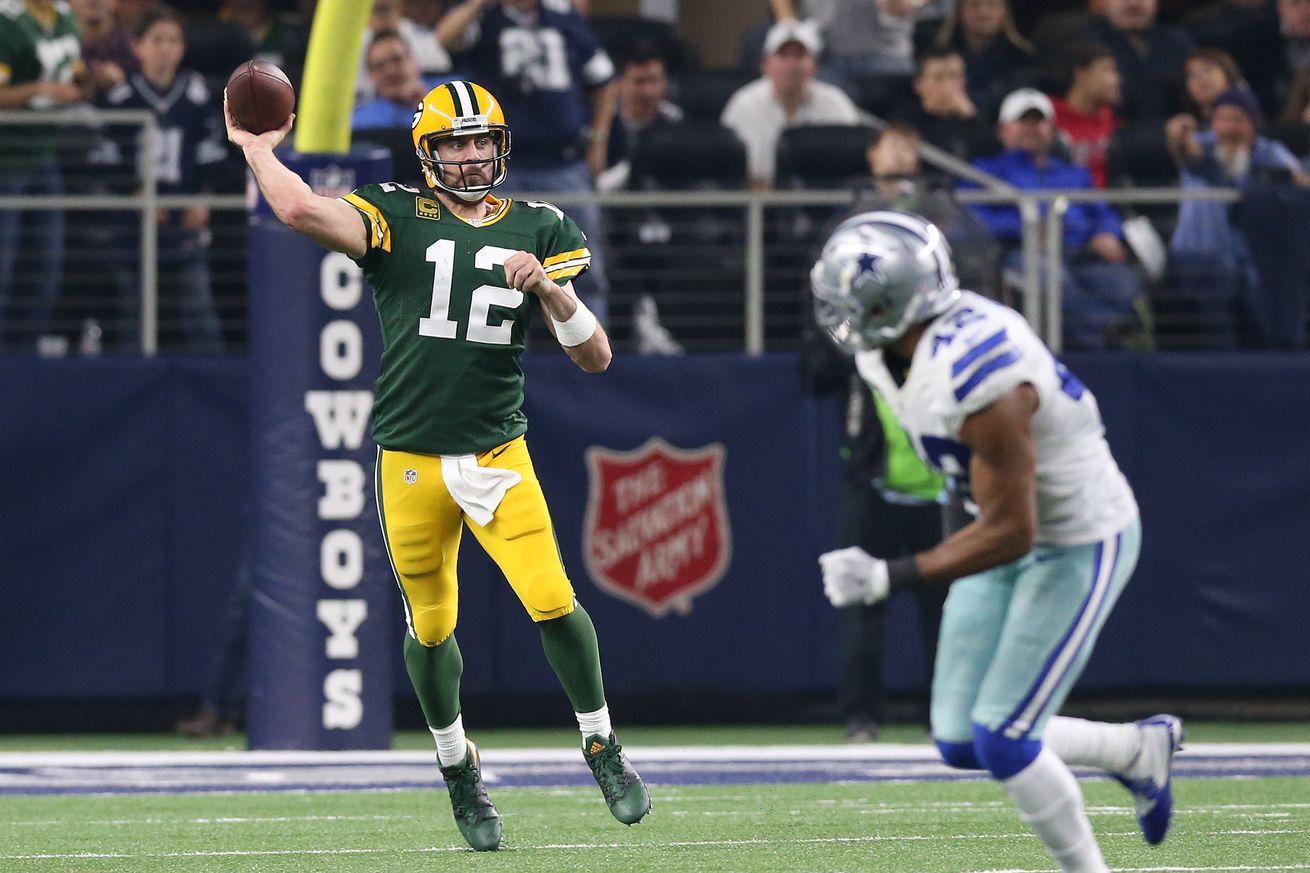 It’s the first Rodgers-less playoff field for the Cowboys in some time.

When you win your division in the NFL you get to go to the playoffs. The Cowboys are in this boat for the third time in the last five seasons, all three of Jason Garrett’s NFC East titles.

In each of the first two attempts the Cowboys have made it to the Divisional Round (only one playoff win to be specific) and in both instances were dispensed by the Green Bay Packers and their mighty quarterback, Aaron Rodgers. This isn’t to say that Aaron Rodgers is the reason why the Cowboys have failed to move on in the postseason, but he’s obviously a difficult hurdle for them and anyone really to overtake.

Rodgers took over for Brett Favre as the Packers quarterback a decade ago and since then has only missed the playoffs three times: 2008, 2017, & 2018. The first two of these seasons listed didn’t see the Cowboys playing in January (part of the reasons they actually felt eerily similar to one another), and missing out on the playoffs last season was indeed frustrating because of this for the Cowboys. It’s not every year that you can enter the tournament void of players like Rodgers, Carson Wentz, Odell Beckham Jr., you get the picture. We even talked about this back then.

We know five of the six NFC teams that will be in the playoffs: Saints, Rams, Bears, Cowboys, Seahawks – with one more to come between the Vikings/Eagles. This is the first time in the Aaron Rodgers era that the Cowboys will be in the playoffs free of him. That’s exciting. It doesn’t guarantee anything more than any other year, but if you told Superman that the party he was going to didn’t have kryptonite, he’d probably smile all the more wide.

Looking at the quarterbacks there’s Drew Brees, Jared Goff, Mitchell Trubisky, Russell Wilson, and Kirk Cousins or Nick Foles that the Cowboys will have to worry about. There are two guaranteed, with Nick Foles as the potential third, Super Bowl winners among them, and the Cowboys could potentially play two of them if things shake out a certain way. They’ll likely start against one in Russell Wilson.

NFC Playoff Seeding as of Week 16:

While the prospect of facing Drew Brees doesn’t exactly sound like a bowl of ice cream, I think I speak for Cowboys fans everywhere by saying that at least it’s not Aaron Rodgers. You never want to acknowledge that somebody else has your number but the reality is that the Cowboys haven’t been able to best him in games that truly matter. Knowing that it’s impossible to face him seemingly makes everything else not as intimidating.

The most difficult route to the Super Bowl that the Cowboys could possibly face would involve the Bears also advancing to the Divisional Round. In that scenario Dallas would have to vanquish Russell Wilson, Drew Brees (at the Superdome), and the winner of Bears/Rams at their house. While again that is hardly the easiest road imaginable it must be said that it does not include Aaron Rodgers.

Each of the last four playoff appearances for the Cowboys have ended in the Divisional Round, two at the hands of Aaron Rodgers. Half of these came after Dallas had a first-round bye, but that will obviously not be the case this season.

The overwhelming likelihood is that Dallas will host Seattle in the Wildcard Round and they’ve won each of their last two games in that phase of the playoffs (Philadelphia in 2009, Detroit in 2014). Coincidentally, the last time that the Cowboys lost a game in that round of the playoffs was to the Seattle Seahawks. You know the game.

Does the fact that Aaron Rodgers is absent from the playoffs help you sleep just a little bit better? Jared Cook won’t be in them either if that helps all the more.