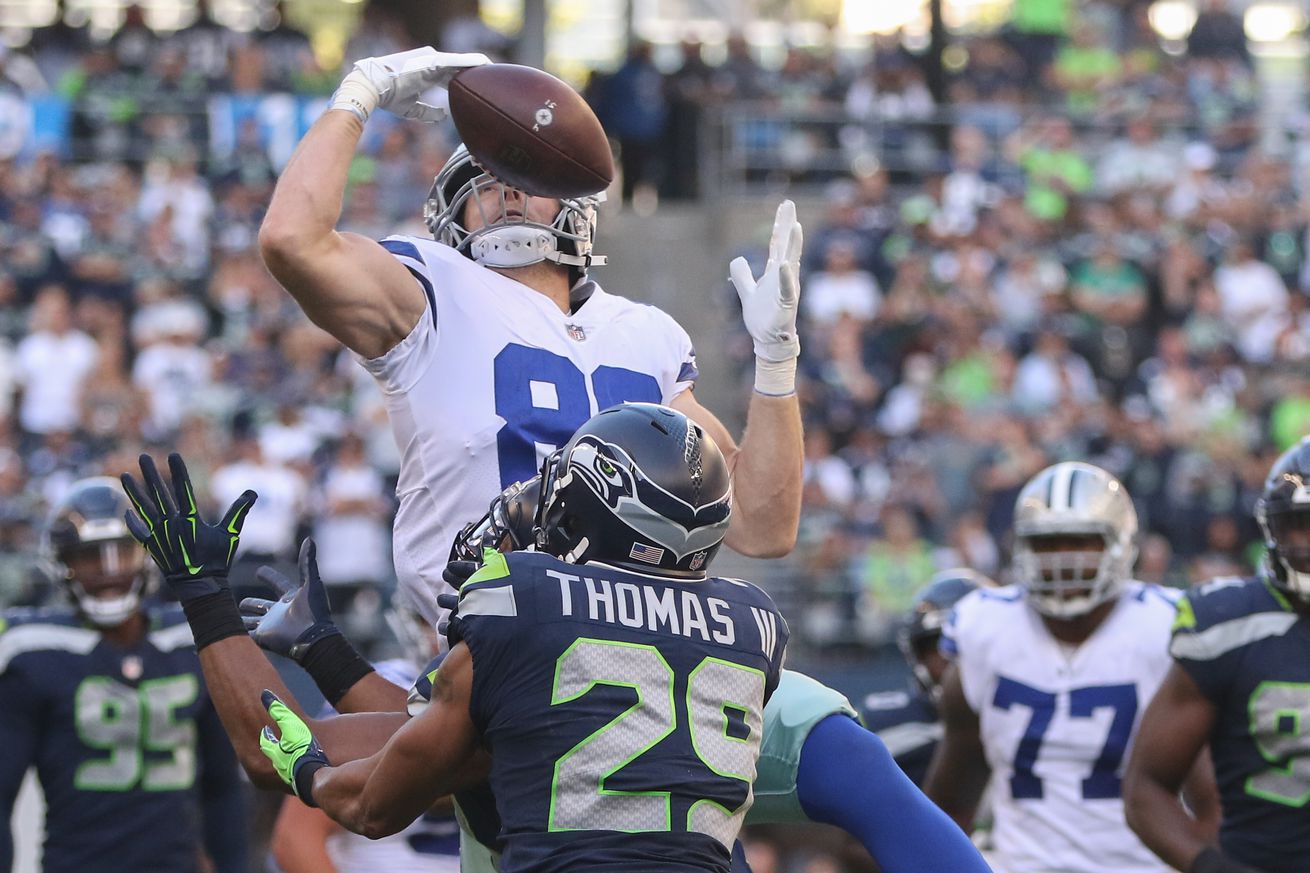 Things should be a little different this time around.

The Dallas Cowboys will host the Seattle Seahawks in next weekend’s wild card matchup. The last time these two teams faced off was in Week 3 this season and the Seahawks prevailed 24-13 up in the Pacific Northwest. The Cowboys turned the ball over three times and couldn’t capitalize whenever they drove the ball down the field. Dallas had more total yards than Seattle, but kept shooting themselves in the foot with costly mistakes.

Things have changed since these two teams squared off. Some players are now gone, some new players have arrived, and some of the lesser experienced guys are a little more experienced now. Here are five reasons things could work out a little better for the Cowboys this time around.

There was so much attention given to the idea that the Cowboys would trade for Seahawks All-Pro safety Earl Thomas this season. We waited and waited, but a deal never went down. Thomas would finish out the final year of his contract with the Seahawks, however it was cut short as he suffered a lower leg fracture in Week 4 against the Arizona Cardinals.

While Thomas’ season wasn’t very long, he lasted enough to be a thorn in the side of the Cowboys when they played earlier in the season. He was second behind Bobby Wagner with seven tackles, but had two interceptions. Both of his picks came off of deflections as Thomas showed great reflexes to come away with the turnovers.

There will be no Earl Thomas this time around as second-year safety Tedric Thompson will be playing in his absence.

The Cowboys offense had issues the last time these teams squared off as Dak Prescott only had 168 yards passing. His top wide receiver that game was Cole Beasley with just three catches for 46 yards. That’s not going to cut it.

While the trade for Thomas never happened, the Cowboys still made a big trade when they acquired Amari Cooper from Oakland for a 2019 first-round draft pick. It turned out to be a good move. Cooper’s caught 53 passes for 721 yards with Dallas, including six touchdowns. He’s been a spark for the Cowboys offense. Even though he’s only played nine games with Dallas, two of Cooper’s top three performances have been with the Cowboys this season. And it’s not just Cooper’s stats that have benefited. Dak Prescott has only had two games in his career where he’s thrown for over 350 yards and both of them have occurred with Cooper on the team, including a 387 performance on Sunday against the Giants.

Cooper has only played the Seahawks once and it happened earlier this season. Unfortunately, he didn’t last very long in the game.

3. Zeke knows where the out of bounds are

The Cowboys had a chance to even the score 7-7 in the second quarter when Ezekiel Elliott scampered down the sideline for a 31-yard touchdown reception. Unfortunately, Zeke had lost track where the sideline was and stepped out of bounds prior to catching the ball.

The mistakes kept coming for Elliott. He had a costly drop on a third down pass and he lost the ball after the Seahawks caught him from behind following a nice run.

Any time the Cowboys started building up steam, they would suffer a tough break. Elliott had 127 yards rushing against the Seahawks on only 16 carries for nearly an eight-yard average. The Seahawks have a middle of the road run defense and Elliott could be a problem for them. Don’t bank on Elliott making these same mistakes this time around.

The last time these teams met, Sean Lee was the Cowboys starting weakside linebacker. For rookie Leighton Vander Esch, it was only his third game in the league and he was gradually working himself in to the rotation. He only played in 33 defensive snaps (47%). He still managed 10 tackles in limited action and it was the beginning of him getting more reps. Vander Esch is playing almost the entire game now and having a great rookie season.

The Cowboys have a top five run defense, but they will be going up against the best rushing offense in the league. Seattle averages an impressive 158 yards per game. They are the only team in the league that rushes the ball more times than they pass it. Dallas did a good job stopping the run as Seattle averaged less than three yards per carry, but the Seahawks stayed committed. Chris Carson rushed the ball 32 times as they kept drawing the Cowboys defense in, only to hit them with a big passing play.

Vander Esch went down with a leg injury on Sunday, but it doesn’t look like anything that’s going to be a problem. The Wolf Hunter is a lot more experienced this time around.

5. Blake Jarwin is much better at catching passes now

The Cowboys were making a push to stay with the Seahawks when they were driving down the field, trailing 24-13 in the fourth quarter. It looked like they were heading for another score, when this happened.

This Earl Thomas guy is pretty good. Two INTs in this game versus the #Cowboys… And we ALL thought he was some double agent lol! #Seahawks #DALvsSEApic.twitter.com/zBlM96CE7K

Prescott tried to hit Blake Jarwin over the middle, but linebacker Bobby Wagner was able to arrive just in time to knock the ball up. Jarwin tried to haul it in, but just couldn’t bring it down and the fortuitous Earl Thomas was there to finish the play.

Prescott has relied on his tight ends quite a bit. In fact, Geoff Swaim was the team’s leading receiver the last time they faced Seattle. Swaim is out, but Jarwin has taken over the pass catching duties at the tight end position. And things are starting to click for the Cowboys young tight end as he had a career game against the Giants. Jarwin caught seven passes for 119 yards and three touchdowns on Sunday. Maybe it was a fluke or maybe this Jarwin kid is just getting started.

It doesn’t seem like it was that long ago where Cowboys Nation was scratching their head wondering where they were going to get production from when it came to their pass catchers. It’s still early, but the Cowboys might’ve found a couple key pieces for their future.

Remember a long time ago when we cried ourselves to sleep wondering how we were ever going to win games without Dez and Witten? pic.twitter.com/tXHMaX3AGo