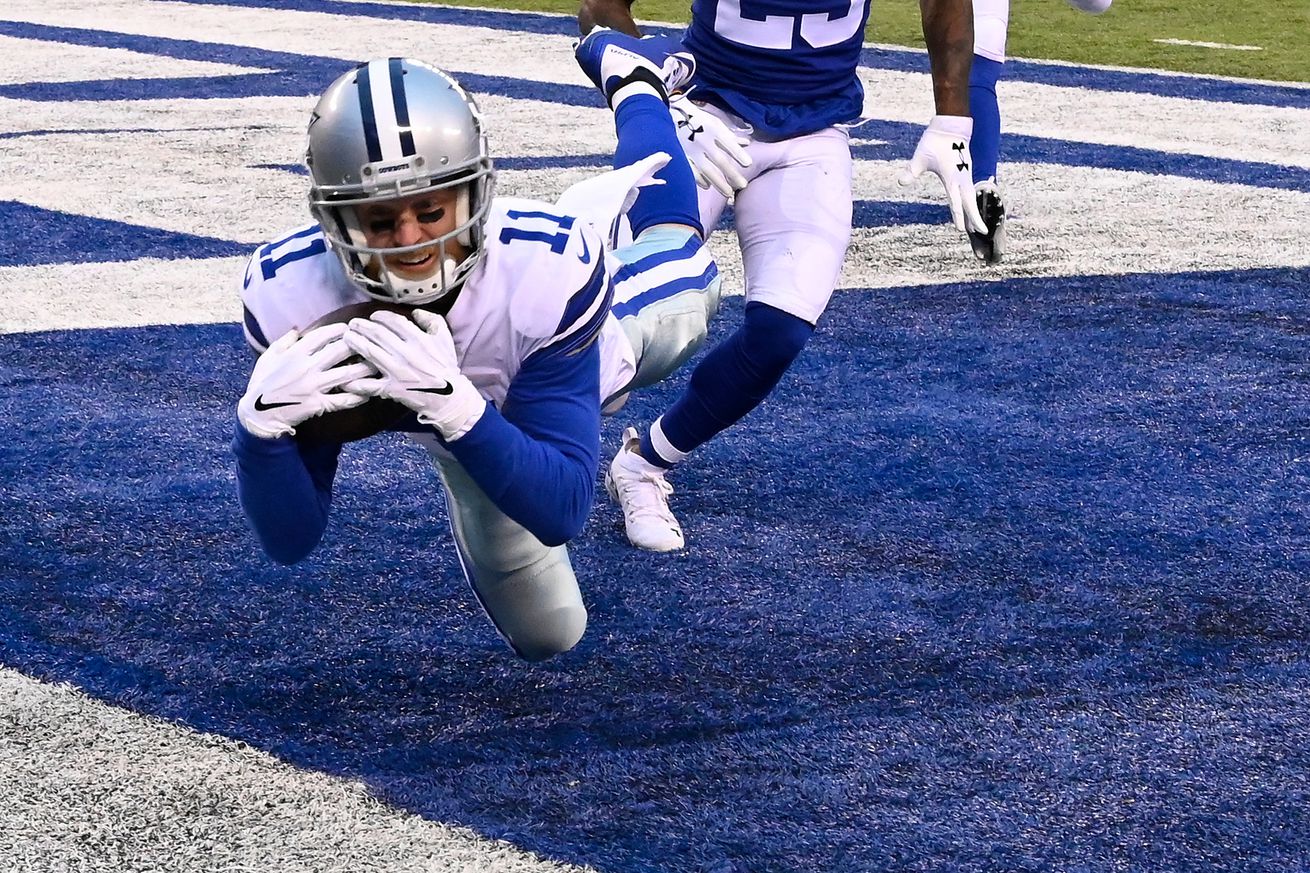 We’re handing out grades after a wild conclusion to the regular season for the Cowboys.

Meaningless games on the final NFL weekend are usually snooze-fests as teams rest starters and use the opportunity to develop and evaluate players for the future. Well, the Cowboys and Giants would have none of that Sunday afternoon, as they engaged in a wildly entertaining tilt that left fans breathless.

The Cowboys emerged victorious on the back of a last-minute, 4th-and-15, 32-yard touchdown pass from Dak Prescott to a diving Cole Beasley. A successful two-point conversion from Prescott to Michael Gallup provided the final margin of victory. A final stop by the Cowboys defense clinched the win and a final record of 10-6 for the NFC East champions.

The game featured numerous big plays, 880 yards of offense, lead changes and enough drama for a Broadway show. It was one of the most exciting, entertaining Cowboys games of the season despite having no meaning whatsoever.

Let’s go to the grades.

One of the key objectives for the team going in was to jump-start the offense. Well, consider the mission accomplished. The Dallas offense racked up 36 points and 419 yards. They turned the ball over only once, avoided the costly penalties that have plagued the team, converted four red zone attempts into three touchdowns and converted 13 of 19 third- and fourth-down attempts.

On the other hand, the Dallas defense struggled yet again. Yes, many of the starting defensive lineman sat for much of the game. But outside of two early turnovers they never really stopped the Giants. They gave up 35 points and 441 yards. The Giants had three consecutive second half touchdown drives of 74, 81 and 73 yards. Jeff Heath got run over on multiple occasions by Saquon Barkley; there were other missed tackles. The defensive line got almost no pressure on Eli Manning once Demarcus Lawrence went out of the game.

In short, it was bad defense. And the reality is the Dallas defense hasn’t played real well in a number of weeks:

So, while the offense looked impressive and got back on track the defense hasn’t looked like the dominant unit we saw against New Orleans in over a month.

On the one hand, I give Jason Garrett tremendous credit for having an invested, motivated team ready for a meaningless game. We’ve seen past Cowboys’ playoff teams go through the motions in these games and then they spend the first quarter of their playoff game trying to get their edge back.

Dallas played hard emotional football from the opening kickoff to the final whistle.

But I simply can’t forgive Garrett’s strategy of having Dak Prescott play every down of a meaningless game. Every time Dak dropped back Garrett was risking the Cowboys’ entire season for….what? Nothing. It’s a classic high-risk, zero-reward situation. The fact it worked out doesn’t mean it was a sound strategy; it means Garrett got lucky. Again.

This isn’t the first time Garrett has needlessly exposed Prescott to punishment. Last year in the Atlanta debacle Garrett was calling timeouts late with his team down double-digit points just so his young quarterback could get sacked again. It’s especially risky when you consider the fact the backup quarterback has never thrown a meaningful NFL pass and looked poor in the pre-season.

So, playing without Ezekiel Elliott, Tyron Smith, Zack Martin or Travis Frederick, and with Amari Cooper contributing only 31 yards, Dak Prescott had perhaps his best game as an NFL quarterback. He completed 27 passes on 44 attempts for 387 yards and a career high four touchdowns for a 120 passer rating.

He repeatedly hooked up with emerging tight end Blake Jarwin up the seam, including three touchdowns. Prescott hit numerous intermediate passes, which have been rare events this year. He also used his legs to make big plays out of the pocket. First hitting Allen Hurns for a long pass that set up a Rod Smith touchdown.

But it was Dak’s last throw of the game that will be remembered and replayed forever. After having missed an easy touchdown to Amari Cooper on first down, the Cowboys face 4th-and-15 from the Giants’ 32 down seven points. No problem, Dak did this:

What. A. Throw. And. Catch. pic.twitter.com/MiD68JchI7

It was a terrific play by Dak and an equally impressive catch from Cole Beasley We wrote recently about how Dak elevates his game in one-score, fourth-quarter situations. Well, here’s what he did in exactly that situation Sunday: 6-of-12 for 148 yards, a touchdown and a two-point conversion; driving the Cowboys to touchdown drives of 74 and 70 yards.

Clutch indeed. Many have claimed Dak can’t succeed without a “perfect” situation around him (meaning a dominant offensive line, a dominant running back and elite receiving targets and great defense). Sunday he had none of those and single-handedly put the team on his shoulders and willed them to victory.

Dallas had only 51 yards rushing on 22 attempts. There weren’t a lot of holes for Rod Smith and Darius Jackson but we saw the difference between handing the ball to an elite NFL runner and mediocre NFL runners. There were no egregious gaffes by either back but also no real plays made.

Let’s be realistic, when this is your starting offensive line the expectations have to be tempered:

But the group help up pretty well for much of the game. Dak had time frequently and wasn’t under constant attack as you might have expected. The protection did break down at times; Dak was sacked four times and used his legs to escape pressure several other times. There weren’t many running holes. But there also weren’t any debilitating holding penalties or big hits on Prescott.

Amari Cooper had a third consecutive quiet game, netting only 31 yards on eleven targets. He had a clean drop and fumbled for the team’s only turnover on the day.

The other receivers, however, stepped up. Beasley had 94 yards and the final touchdown. Michael Gallup and Allen Hurns added big plays. The three combined for ten catches and 193 yards on 13 targets. The following iconic image will be remembered for a long time by those of us who witnessed this game:

The Blake Jarwin Experience hasn’t been a real impressive show for most of 2018 but he enjoyed a wholly unexpected breakout game Sunday. He was targeted eight times, hauling in seven catches for 119 yards and three touchdowns.

#Prescott2Jarwin TD! #Cowboys do what playoff teams are supposed to, score 6 vs settle for 3 in the redzone #NYGvsDAL 0-7 #CowboysNation pic.twitter.com/PaKucNWWwD

He repeatedly got deep up the seam in the middle of the field for big-time plays.

These down the seam plays have been missing from the Cowboys’ offense since Jason Witten was still in his prime. It’s a completely new threat for the offense and opens up enticing opportunities. Jarwin became the first Cowboys’ tight end to find the end zone three times in a game since Billy Joe DuPree did it in 1973 (I was there!).

Dalton Schultz added a 17-yard catch as well. The tight end group has really come on over the last four weeks of the season.

The starting unit played pretty well. They didn’t get a ton of pressure on Eli Manning but they did make some plays:

It was nice to see DeMarcus Lawrence reach double-digit sacks on what was eventually ruled a sack and fumble. It was also good to see DT Antwaun Woods get rewarded for his season-long work in the trenches.

Once Lawrence and Randy Gregory went out, however, the defensive line largely fell silent. The Giants moved up and down the field at will and Manning was rarely under pressure. They were also gouged in the run game, giving up 143 rushing yards. Taco Charlton made a couple plays but that was about it.

Admittedly with Lawrence, Gregory and Tyrone Crawford on the sidelines a struggle isn’t unexpected, but you’d expect better than what we saw.

There weren’t any egregious mistakes from this group but there also was an absence of plays. Barkley and the Giants run game was able to rack up yards and first downs. Jaylon Smith did have a couple big hits. But neither he nor Leighton Vander Esch were blowing up plays or separating players from the ball. Sean Lee struggled on several plays, including getting turned around on a key late-game reception by the Giants.

In a game where Chidobie Awuzie shined most of the rest of the group struggled. Byron Jones was beaten twice by Cody Latimer. First on an impressive touchdown catch:

Latimer again beat Jones on an equally impressive deep throw. Frankly both plays were impossible to defend; Jones had good coverage but the ball was placed perfectly and Latimer made two unbelievable catches.

Jeff Heath had a game to forget. On multiple occasions the Giant’s rookie running back embarrassed Heath by running over and through him. He was also beaten clearly on what would have been an easy Giants’ touchdown had Awuzie not made an outstanding read on an early end zone interception:

What a read by Chido on the Interception! #DALvsNYG pic.twitter.com/TOAiTQYazT

Beyond that the Giants were able to move the ball, converting nine of 18 third and fourth downs.

The defense has looked vulnerable the last several weeks and did so again Sunday.

The long-running woes of this group continues. The coverage units gave up three long returns, including a 34-yard return after Beasley’s touchdown that set the Giants up near midfield needing only a field goal for the win. Long returns for opponents have become a constant over the last half of the season and is a major issue as the team enters the post-season.

Brett Maher also continues to look shaky. He badly shanked a 34-yard attempt in the first quarter and later banged an extra point off the post. Maher has missed seven field goal attempts on the season, including three in the last four weeks.

The return of Tavon Austin did not improve the anemic return game in any manner. In short, the special teams are a mess, which is very troublesome for a team that plays with little margin for error.

I would have sat Dak Prescott after a possession or two. It was the prudent thing to do. Had Garrett done that, of course, we all would have missed Prescott’s best game of his career and what was a wildly entertaining game probably would have instead been a forgettable loss. So, chalk this up to a bad process that yielded a good result.

rational me: between game momentum isn’t real. they should’ve benched Dak and made sure of health.

fan me: DAK IS BACK HE DROPPED 4 TDS ON YOUR HEAD

It was good for the offense to get untracked but equally disturbing that the defense got run over by a division foe.

None of it will matter a week from now as what happens one week rarely carries over to the next. We’ll see you in the playoffs.