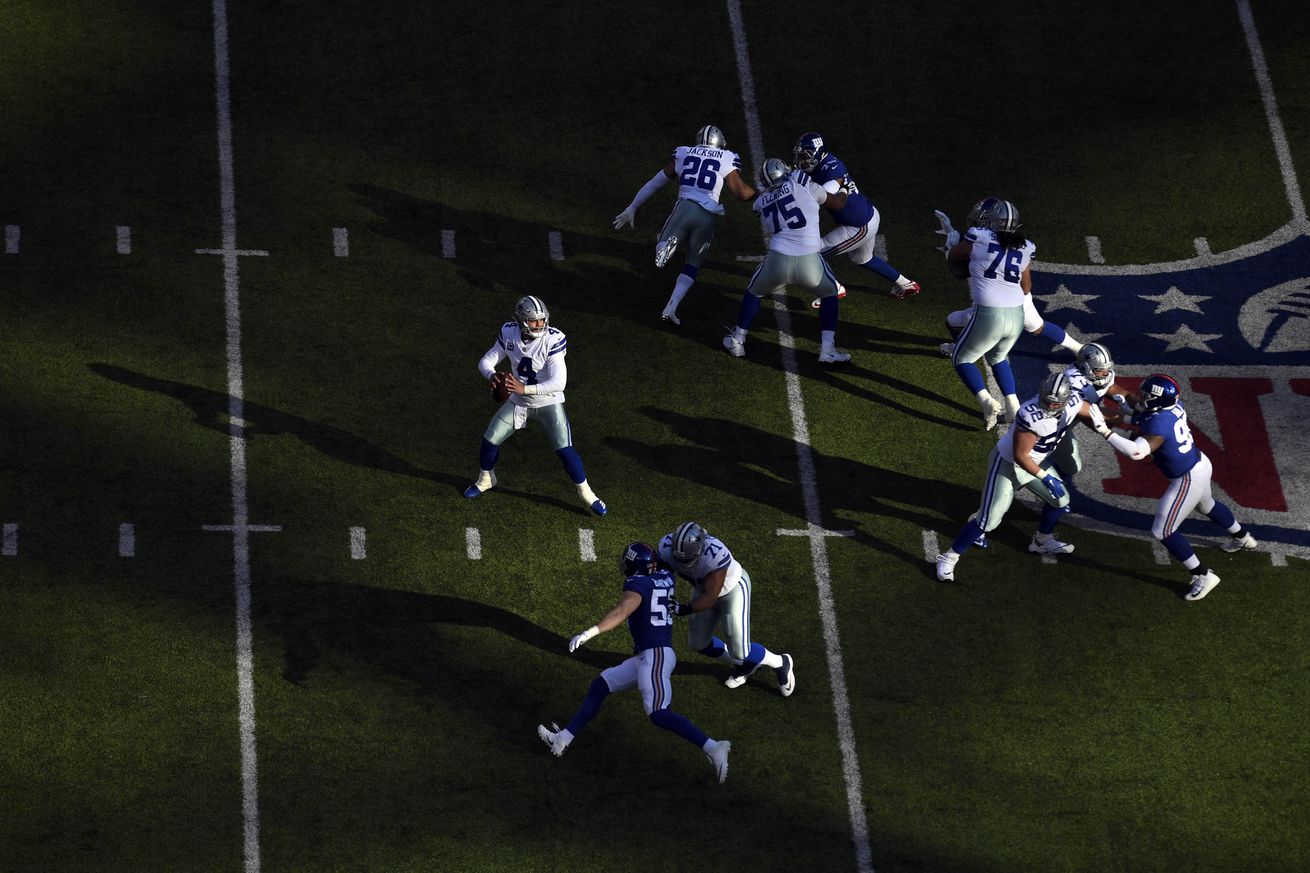 Looking into the past to predict the future.

Dallas Cowboys fans are rightly excited about the team’s upcoming playoff game against the Seattle Seahawks Saturday night. After all, it’s only the team’s third playoff appearance in the last nine years. Both of the previous appearances ended in the division round, both times against the Green Bay Packers.

The Vegas wise guys aren’t real confident in the team’s chances. They’ve made the Cowboys a 2.5 point favorite over the Seahawks. Since home-field advantage is generally assigned a +3 point value, this means those setting the line think Seattle would beat Dallas on a neutral field.

The analytical guys over at Football Outsiders don’t give the Cowboys a very good chance of advancing deep into the playoffs either.

In fact, virtually no one seems to give the Cowboys much of a chance of advancing far. The folks at For The Win rank the Cowboys 12th out of the 12 playoff teams.

Maybe I’m undervaluing the Cowboys here. They are the NFC East champs, after all. But does anyone have faith in the passing game to produce against a good defense? And is the running game enough to carry the offense against the Saints in New Orleans or the Rams in Los Angeles? Before they even make it to that game, the Cowboys will have to make it past the Seahawks in the Wild Card round. Dallas has been able to lean on its defense throughout the season but this isn’t one of those units capable of carrying a team through the playoffs. The Cowboys will be lucky to make it past the first weekend.

The Sporting News doesn’t like the team’s chances much either.

The Cowboys will try to keep things simple offensively with Ezekiel Elliott’s running opening things up for Dak Prescott’s passing, mainly to Amari Cooper. They also will continue their stout bend-but-don’t-break defense centered around stopping the run and premier linebacker play. When the Cowboys are at their absolute, methodical best, they can win a lot of playoff games. It’s also easy for them to be thrown off their formula and that can get too predictable at the worst possible times.

These sentiments are shared by pretty much the entire NFL viewing public, based upon final season power rankings:

Dallas is ranked 11th or 12th in six of the eight power rankings. Honestly, it’s not hard to understand why Dallas isn’t ranked higher. While the team’s record was good enough to cleanly win the NFC East division, the team’s various numbers don’t look very good compared to the other playoff teams.

Pro Football Reference has developed a Simple Rating System (SRS) that provides a single metric to measure teams. It’s pretty simple really, just the team’s average margin of victory adjusted by strength of schedule. The Cowboys average margin of victory (0.9) is barely above average; they did face a slightly more difficult than average schedule (worth 0.2 points per game) so the team’s SRS is 1.1.

Compare the team’s SRS to the rest of the playoff field:

Another way of looking at teams is to segment their games into one-score results and “blowout” results (8+ margin of victory).

We see Dallas is the only playoff team to lose more games by 8+ points than they won. In fact, they only won one such game the entire season (over Jacksonville). Compare that to the 2016 Cowboys’ team that went 6-1 in such games.

By contrast, the Cowboys had an outstanding 9-3 record in close games. Most stat guys will tell you that:

The Dallas offense ranks 26th, the defense ninth and the special teams 21st. Overall the FO gang ranks the Cowboys as the 20th best team in the league. They don’t like the Eagles much better, ranking them 17th.

We can also look at how the playoff teams did against quality competition:

Here we see most of these teams had mixed results in such games; a sign that no team is truly dominant. The Patriots did manage a 4-0 record against quality teams, but they also went 7-5 in their other games, including double-digit losses to Jacksonville, Detroit and Tennessee.

In short, this illustrates what most of us already know: there are no dominant teams in the NFL this season. Remember that SRS above, where no team reached the “great” threshold of 10? This means even a team like the Cowboys has a puncher’s chance.

A look back at recent NFL history shows that occasionally a lower seed breaks through and makes a deep run. Here are the seeds that advanced to the Super Bowl since the turn of the century:

While number one seeds have dominated very recently we see that 4, 5 and 6 seeds can make deep runs every now and then. In fact, lower seeds that get hot tend to finish with the trophy. Consider the following teams all won Super Bowls:

That’s six times in the last 18 years when a team seeded 4, 5 or 6 was crowned Super Bowl champion. Is this the year a lower seed again breaks through and makes an unexpected run? The odds-makers don’t like the Cowboys’ chances, but that’s why they play the games, right?