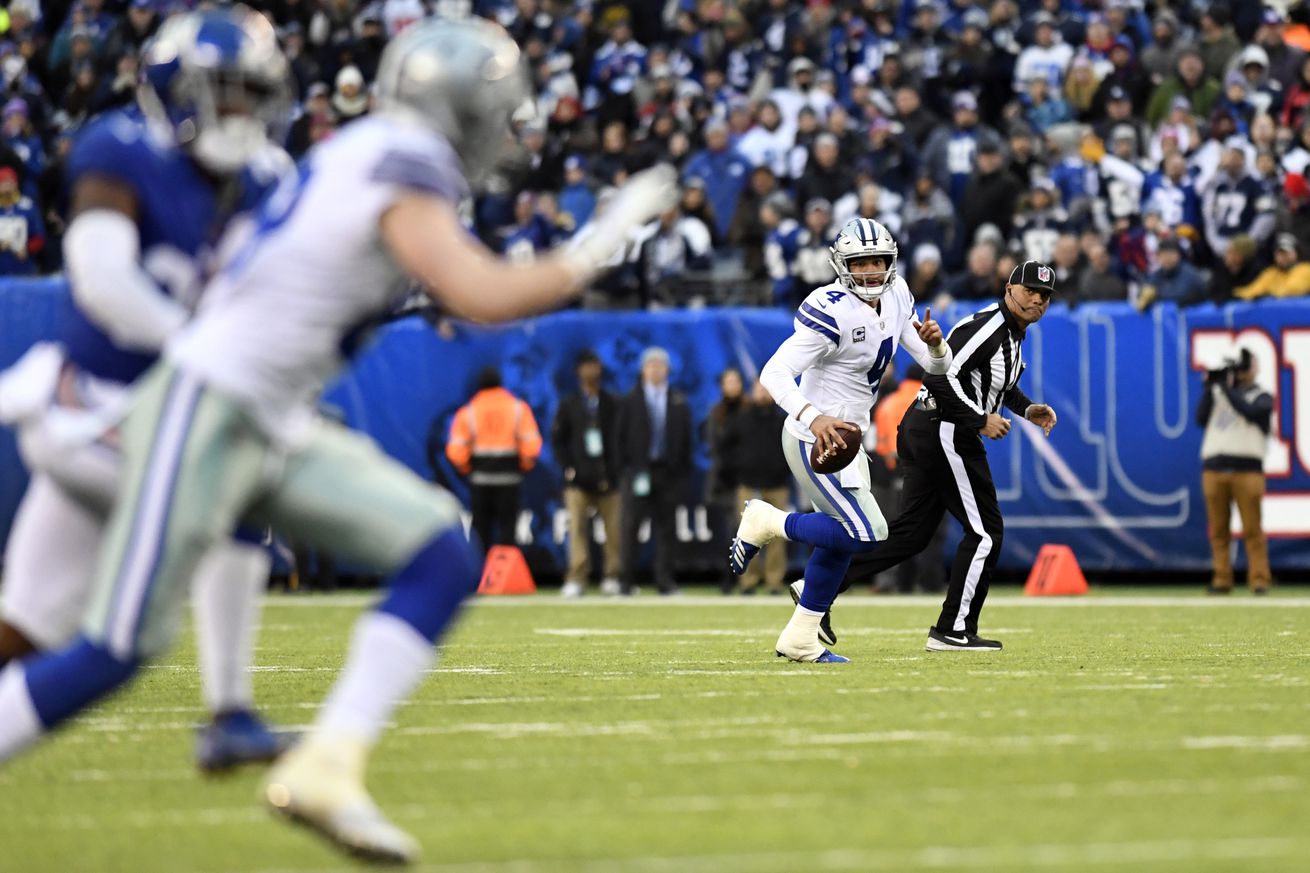 Dak Prescott is playing his best football and it’s a big reason why the Cowboys are headed to the postseason.

The risks and rewards of playing your starting quarterback in a game with no stakes can be debated, but from the start of week 17 prep for the Giants, Cowboys coach Jason Garrett made it clear that healthy players were going to play and we saw a full game for quarterback Dak Prescott. He did make an exception for Ezekiel Elliott.

For a Cowboys team that had been in playoff-mode since week eight, why would they stop now? The Cowboys kept their foot down after a 3-5 start and rolled to a 7-1 finish. Sunday’s 36-35 gutsy division win in New York was the culmination of their comeback season.

What a year it has been for the Dallas Cowboys and especially their quarterback, Dak Prescott.

His final regular-season performance was nothing short of sensational in a game that everyone was dubbing “meaningless.” It obviously had plenty of meaning for Dak Prescott, who finished the day 27 of 44 for 387 yards, with four touchdowns, no picks, and a passer rating on 120.2. To have a game like that, right before the playoffs begin, is the ultimate reward for Dak Prescott who experienced a ton of adversity in only 16 weeks of football. It was a phenomenal day for Dak but he also did it without some of his best counterparts.

Before kickoff, it was announced that All-Pro linemen Tyron Smith and Zack Martin would be healing up for the playoffs. In addition, the NFL’s leading rusher, All-Pro Ezekiel Elliott would also be getting necessary rest as he finished the season with 43 more carries than the runner-up. If Dak Prescott really wanted this tenth win of the season, he was going to have to get it without three of the best players in football… period. That’s exactly what he did and this victory embodies what Dak Prescott is as a competitor, as a quarterback, as a leader of this Cowboys football team.

So many times we watch Prescott and quickly point out his mistakes as a quarterback. Every quarterback has deficiencies but Prescott has put in the relentless effort to improve. It’s important to remember how low Dak Prescott had sunk between his 25th and 35th starts after such a dazzling rookie season:

Let’s break those awful numbers down to show just how bad the average game was for Dak Prescott during that time frame:

Though the Cowboys improved exponentially after the arrival of Amari Cooper, Dak actually began his climb with week four’s 26-24 win over the Lions. The way Dak Prescott played in starts 36-48 wasn’t perfect but it’s certainly one huge leap from where he was:

Just for good measure, based on Dak’s first eight games of this season, this is what his projected finish was after the 28-14 loss to the Titans:

Those numbers are somewhere between Ryan Tannehill and Andy Dalton’s output when they were Prescott’s age. When you’re the quarterback for the Dallas Cowboys, that’s not comforting to anyone and it would have made Prescott’s seat at QB1 much hotter for 2019. Thankfully for everyone involved, Dak Prescott was much better than that over the final eight games of the season:

Dak still has a lot to work on but this is just his third year in the NFL and Jason Garrett had a great quote about his quarterback:

“Sometimes people get down. Hey, [Prescott] takes sacks but one thing you have to understand when you have a mobile quarterback like that, there’s a lot of good plays he makes too,” Garrett said in response to Prescott’s heroics at the end of the Giants game. “Certainly, that was as good a play as I’ve ever seen him make and ‘Beas’ made a big-time catch on the other end of it.”

Dak has been sacked 56 times this season and if you asked him, he would probably tell you that half of them are on him. It wouldn’t necessarily be true but that’s just how Dak is wired but that’s what has been impressive about this Cowboys late-season surge. Dak is actually averaging getting sacked more than he was during the worst stretch of his career but he is not letting it affect him nearly as much.

In 12 of the 16 games Dak Prescott played this season, he’s been sacked three or more times. Prescott is 7-5 in those games and only Deshaun Watson is better this season at 8-5. Dak has won four games this season where he was sacked four or more times, including seven sacks in the Cowboys signature 13-10 win over the Saints. Dak’s passer rating in those games is 115.0, 12 points higher than Watson’s 103.

For most of his three seasons since stepping in for Tony Romo, often the focus is on what “Dak can’t do.”

Sure he can, he’s got a .571 record without Zeke. In this Giants game, the offense got all of 51 rushing yards on 18 carries out of Rod Smith and Darius Jackson, that’s 2.8 yards per carry.

“Dak can’t beat you with his arm!”

Ask the Lions, Eagles, and Giants where Dak completed 68.8% of his passes for 1,097 passing yards, nine touchdowns, two interceptions, and posted a 114.5 passer rating.

Dak has done quite a lot for the Cowboys in a short three years, including being second only to Tom Brady in wins since 2016 with 32. Dak Prescott has eight fourth-quarter comebacks and 14 game-winning drives in his career. Whenever they have needed it most, Dak Prescott has delivered and that rollout pass to Cole Beasley or simply “4th and 15” will live in the Cowboys’ lore forever. Who knows what will happen to the Dallas Cowboys in the postseason but it’s been a great ride. When you look at the remarkable turnaround the Cowboys had, make sure to put Dak Prescott’s resurgence among the top reasons as to how they got here, hosting a playoff game next week.