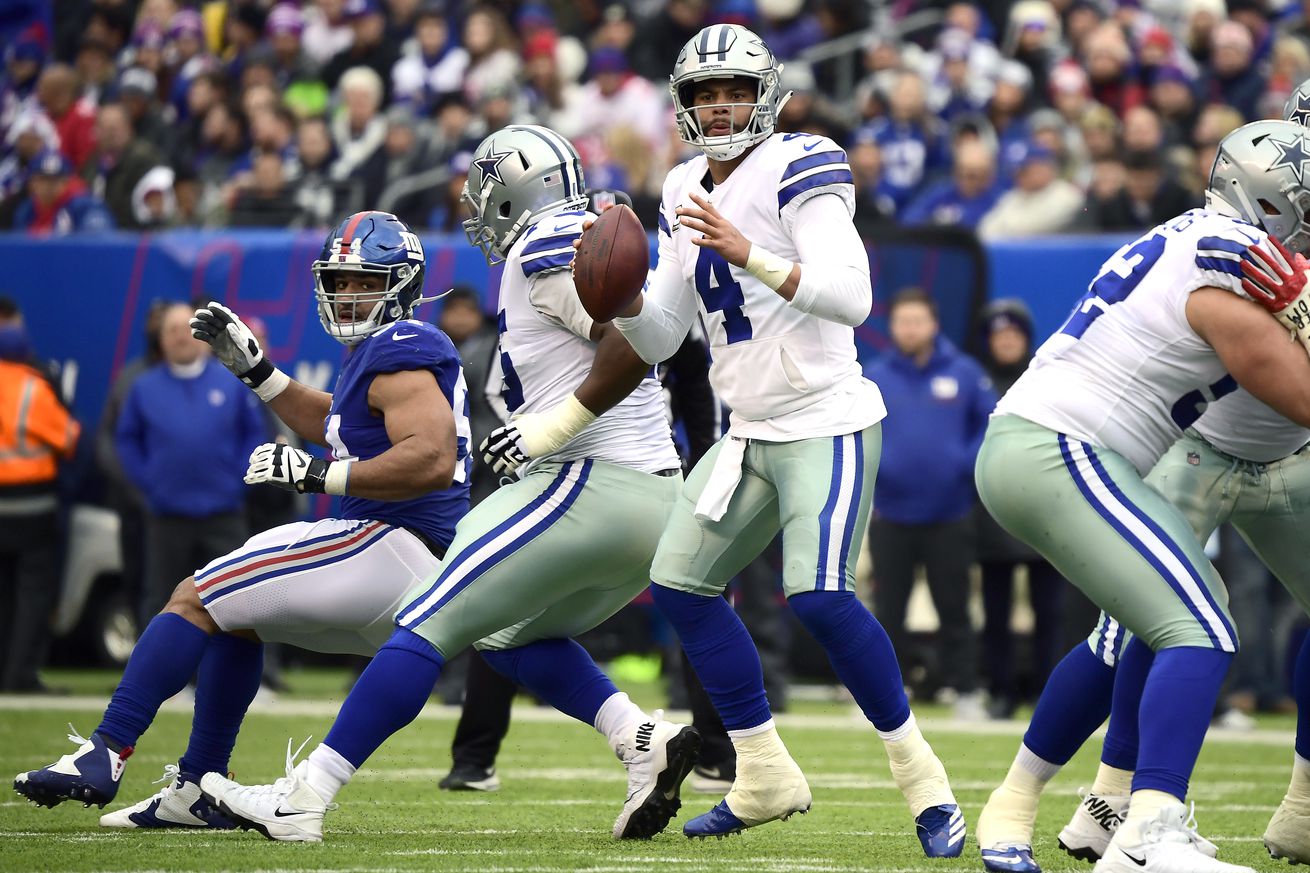 Looking at the Cowboys-Seahawks matchup plus more.

NFL playoffs confidential: Players and coaches talk strategy, tell all – NFL Nation- ESPN staff
This is all from “anonymous sources”, but these are still some interesting questions and answers about the Cowboys as they head into the playoffs.

Is Ezekiel Elliott the best all-purpose RB in the game?

“He’s No. 1 in the league in rushing yards. He’s deadly every time he touches the ball out of the backfield. He’s an every-down back, but I’d probably say [Todd] Gurley. He’s more dynamic as a receiver. [Alvin] Kamara is definitely up there, too.”

“Oh, definitely Zeke. But the reason they’ve been able to have that success is both Zeke and Dak, and they added Amari Cooper. It has changed their offense and given them more balance.”

Was Amari Cooper the best trade acquisition this season?

“Oh, absolutely. It changed the trajectory of the Cowboys. It changed how their offense looked. It allowed their defense to play even better. Now they’re scoring and moving the ball. That definitely was the move of the year in the league.”

Is edge rusher DeMarcus Lawrence in the same category as J.J. Watt?

“His skill, talent and ability are just as good as Watt’s. He’s really good. He has great hands, length and ability to bend and get under guys. He has power. He just plays so darn hard. That is what sets them apart.”

2018 NFC Confidence Rankings: Do Cowboys have what it takes? – K.D. Drummond, Cowboys Wire
A nice look at how the NFC playoff teams stack up based on position groups and coaching. It predicts the Cowboys having a slight edge in a close matchup.

The Cowboys are the only team other than the Saints with multiple first-place finishes (RB, LB). If it weren’t for their last-place finish in coaching, they could’ve caught or surpassed the Rams. Here though, everything is weighted evenly. In reality, the coaching impacts everything the other positions are doing, and the – according to this – third-best NFC team has the toughest opening round of all.

The Seahawks have the best coach, and Carroll will have to work his magic to travel the furthest distances on a path back to the Super Bowl. They finished last in both trench categories (OL, DL) and that may be the biggest impetus to getting a win in the tournament.

No human picks for the Cowboys. Is it really that much of a one-sided affair? Dallas is the favorite, according to the people who make the odds for these things. But that’s apparently not enough to convince our panelists.

Maybe it’s the Seahawks in primetime. Seattle is 11-2 in their last 13 primetime games. Plus, it’s hard to bet against Russell Wilson.

Consider this, the third-year Dallas back ran for 1,434 yards in the regular season, which was good enough to give him a second NFL rushing crown. That is the seventh time a Cowboys rusher has topped the yardage chart with Emmitt Smith doing so in 1991, 92, 93 and 95; DeMarco Murray grabbing his crown in 2014 and Elliott doing the same as a rookie in 2016.

“The Cowboys won the Super Bowl all of those years,” my co-host Cory Mageors jokingly … I hope … said on Monday.

No! We all know that isn’t right.

However, the Cowboys did win the Super Bowl in three of those years and more importantly, at least as far as this weekend is concerned, Dallas advanced to at least the divisional rounds in each of those seasons. Sure, the naysayers may point out that in most of those campaigns, the team had a bye directly into the divisional round – I say, don’t let that minor detail slow ya down and instead focus on this … prior to this season, the Cowboys had six rushing champs and were in the divisional round of the postseason all six corresponding years.

Prescott rolls into 2nd postseason with Cowboys, unlike 1st – Schuyler Dixon, Associated Press
The first playoff appearance for Dak didn’t end up so great, partly because of a rough start to the game. But there is one significant reason to think this year will be different.

Dak Prescott barely played over a three-week span before losing in his postseason debut as a rookie quarterback with the Dallas Cowboys two years ago.

Rust won’t be an excuse in his second playoff game against Russell Wilson and the Seattle Seahawks (10-6) on Saturday night.

Not only did Prescott play the entire game with the Cowboys (10-6) already set as the fourth seed in the NFC before a 36-35 win over the New York Giants , he had just the fourth game in his three seasons with at least 40 attempts and a career-high four touchdown passes.

”We can definitely build on this,” said Prescott, who was 27 of 44 for 387 yards, capped by a 32-yard score to Cole Beasley on fourth down and a 2-point conversion pass to Michael Gallup. ”This was not meaningless to me. It wasn’t meaningless to any of the guys that played or even to the guys that didn’t play.”

Rod Marinelli said to play Wilson you need to build a well around him and make him throw from there. This makes perfect sense, but I’d also add to try and make him plays backwards. When Wilson can run to the line or face it, he has a good chance of completing the ball. When he plays off his back foot, he has trouble getting enough on the ball to finish plays. There were times in the Kansas City game where they were able to keep him in the pocket and it affected the way he played.

When Russell Wilson can escape from the pocket, he’s as dangerous as they come in the league. He’s going to make plays but limiting the number of his big plays is a must.

Dallas Cowboys: Film room: 3 role players who will be critical to a Dallas Cowboys’ playoff run | John Owning, SportsDay
This includes a look at a favorite of many, Antwaun Woods, and uses an odd but effective way to show just how important he is.

Week 15’s matchup against the Colts proved Woods‘ value to the defense. Woods arguably had his worst performance of the season in that game, and the effect was felt throughout the defense.

Because Woods couldn’t get off single blocks, it allowed Indianapolis to send one or two interior linemen to the second level without needing to secure the line of scrimmage first, which meant Smith and Vander Esch had to deal with linemen in their face right after the snap.

It’s not a coincidence that in Woods‘ worst game of the season, Dallas gave up 178 rushing yards — the most rushing yards it has given up in a game all season.

This is why Woods’ performance in the playoffs is incredibly important. The Cowboys’ defense is at its best when Woods is eating up blocks upfront, giving Smith and/or Vander Esch the ability to get off their spot and play downhill against the run.

The Marinelli Report, Week 17: Cowboys defense closes poor day with two big defensive stands – Bob Sturm, The Athletic
Most Cowboys fans are focused on the outstanding job Dak Prescott and the offense did against the Giants. But the defense nearly let that game get away from them, and this review puts all that into context.

It wasn’t pretty at all, but the Cowboys defense was able to turn the switch when they needed it most on Sunday, in a game where staying healthy seemed a bigger priority for much of the day.

Now, they must continue to do against Seattle what they have done in most of the last few meetings — stifle the Seahawks offense. Seattle has run the ball against the Cowboys 69 times in the last two meetings for just 189 yards (2.7 a carry) and passed the ball for 242. (121 per game!) But Russell Wilson inevitably has found a few big plays and thrown four touchdowns, and more importantly, the Seahawks have played both games under duress but never turned the ball over a single time.

We have seen the Cowboys defense deal with the Seahawks. But to win on Saturday, they will likely need to take the ball away twice. The Seattle defense gives the Dallas offense absolute fits (more on that Friday), so for Dallas to advance, I suspect it will need to because they have a defense that helps win games. Never has that been more vital than on this occasion.

Blake Jarwin was named NFC Offensive Player of the Week for his three-touchdown catch performance in last Sunday’s win over the Giants.

Actually, Jarwin becomes the first Cowboys tight end in franchise history to win NFC Player of the Week, despite the team having Pro Bowlers Jason Witten, Jay Novacek and Doug Cosbie around since the award was created in 1984.

#DallasCowboys Player of the Week awards in 2018:

And just because I love a bad pun:

Jaylon Smith named finalist for 2018 Butkus Award – Patrik Walker, 247 Sports
This has been the season when Jaylon Smith finally realized his potential as an unreal force at linebacker. And while he is up against some really stiff competition, just getting in this conversation is a major accomplishment given what he had to overcome.

Fast forward to the present, and Smith is without the brace, completely healthy and a force to be reckoned with. Pro bowl or not, he’s not one to be trifled with in 2018. The former All-American has amassed 122 combined tackles (83 solo), four sacks, four pass breakups, two forced fumbles, two recovered fumbles and one defensive touchdown in his 16 starts. Those are numbers that could potentially land him an All-Pro nod this year, but in the meantime, he’ll prepare for the Wild Card battle with the Seattle Seahawks knowing he’s a finalist for the 2018 Butkus Award — an honor bestowed upon the top LB in the league.

Cowboys value Dak Prescott, but at what price? – Todd Archer, Dallas Cowboys Blog- ESPN
Right now, the focus is on the playoffs, but there will eventually have to be a decision made on what the Cowboys will pay Dak Prescott. He is a true bargain right now, but with two playoff appearances in three seasons, his price is going up. A lot.

Cowboys owner and general manager Jerry Jones has said Prescott is the Cowboys’ quarterback of the future. Jones said Prescott will get a contract extension. What he hasn’t said is when.

The Cowboys could have more pressing matters than extending Prescott this offseason, with DeMarcus Lawrence set to be an unrestricted free agent and Amari Cooper and Byron Jones on their fifth-year options in 2019.

Waiting on a deal for Prescott would allow the Cowboys more time for growth to help their evaluation. He is signed through 2019, and his salary will be roughly $2 million as a result of the proven-performance escalator for non-first round picks.