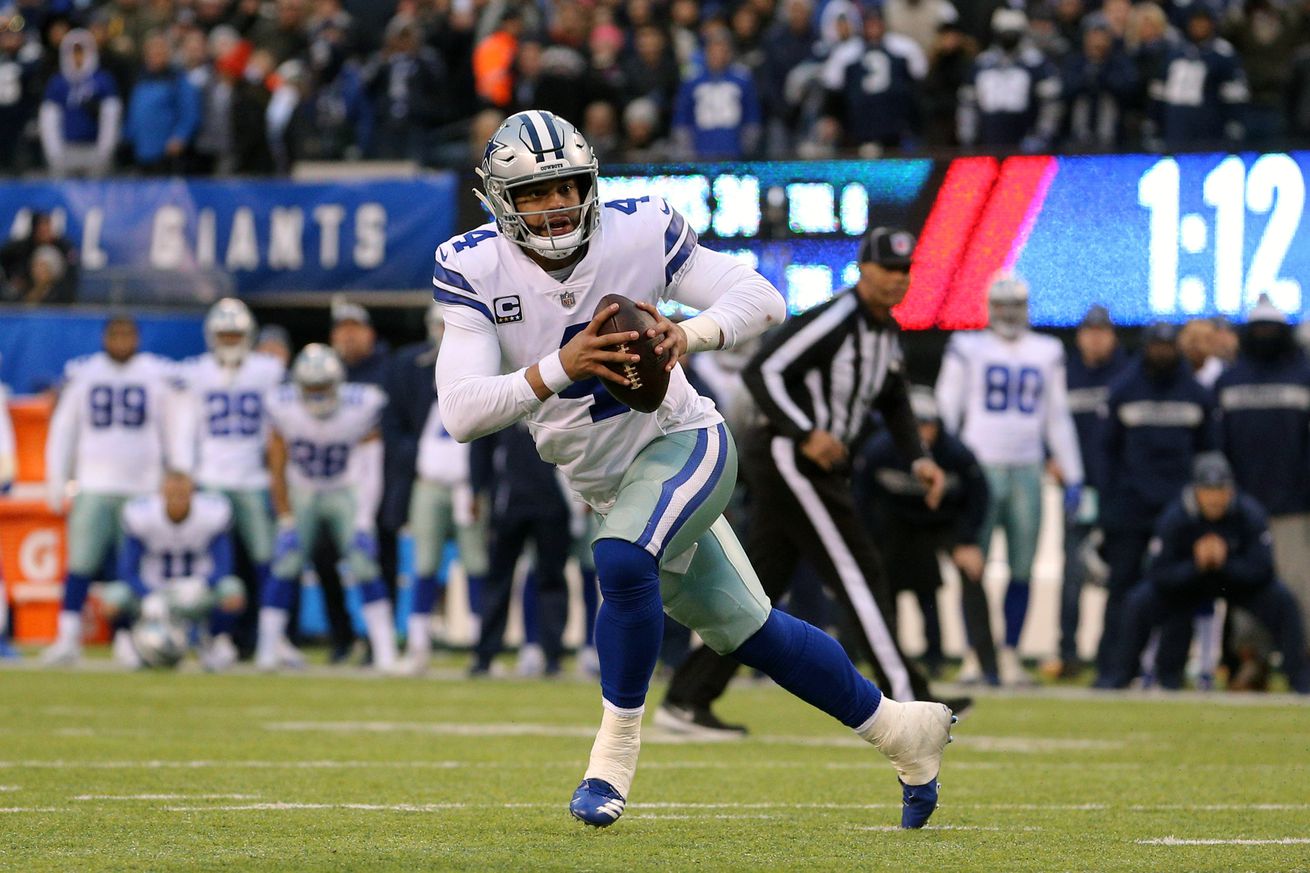 Say what you want, but Dak gets it done.

Playing quarterback for the Dallas Cowboys has a spotlight like none other in sports. The responsibility of quarterbacking and leading America’s Team comes with tons of attention — and therefore, a lot of scrutiny.

We saw with it Tony Romo, despite number nine proving to be among the best at his position during his career in the NFL. Now we are seeing it with Dak Prescott, who has just led the Cowboys to a second ten-win season and NFC East title in his three seasons in the league. He has yet to post a losing season.

Can Dak improve? Of course. This is his third season in the league, and the young signal-quarterback is already ahead of where he was originally supposed to be, considering the Cowboys drafted the Mississippi State product in the fourth-round to back up Romo. While Prescott can certainly find ways to be better in different areas, such as getting rid of the football quicker and making confident throws, number four has shown that he can get the job done time and time again.

Take a look at some of what Prescott has accomplished thus far on the professional level for America’s Team.

Dak Prescott has thrown more touchdown passes through the first three seasons of a quarterback’s career than anbody not named Peyton Manning or Andrew Luck, who also tossed 22 at the same point in their respective careers.

Dak Prescott with 22 TD passes on the year now.

He joins Peyton Manning and Andrew Luck as the only quarterbacks in NFL history with 22+ TD passes in each of their first three seasons.

Prescott’s latest touchdown was certainly among the most exciting of his young career:

Look. At. That. Throw. pic.twitter.com/711TmLFHjl

Dak has already matched Troy Aikman in one particular statistic

Yes, they are two different eras of football, but it is interesting to see that Prescott has as many games of 3+ touchdown passes through 49 games that Aikman had in his whole career.

Prescott is a true dual-threat. Dak continues to improve as a passer as he continues to grow and learn, plus he has the ability to burn defenses with his legs. Not only does the Cowboys quarterback have more rushing touchdowns than anyone else at his position since entering the league in 2016, but Prescott is also the first player to ever have 20+ TD passes and 5+ TD runs in each of his first three seasons on the professional level.

Is Dak a perfect, flawless quarterback? No, we understand that. But Prescott is a good NFL signal caller that takes his game to another level when it is time to win.

Today was Dak Prescott’s 14th career game-winning drive. That’s the most in NFL history in a player’s first three seasons.

At the end of the day, Dak has shown that he can get it done. With three consecutive winning seasons, Prescott sits in rare company — as only four other quarterbacks can make that claim in 2018-19.

Damn it, also Dak Prescott. So there’s four. Shows how hard it is to consistently win in NFL.

Not only that, but in two of those seasons the Cowboys won at least ten games and made the playoffs. That’s impressive.

Say what you want about Dak. He’s not perfect, but he has led the Cowboys to three consecutive winning seasons — including 10+ wins and a playoff berth in two of those.

Take a look at this résumé

Rayne Dakota Prescott, first of his name. Dallas Cowboys QB, rightful captain of the offense and chanpion of the NFC East.

The resume after three seasons: pic.twitter.com/CpOsEPYPfk

Dak might be getting hot at the right time

Dak Prescott’s play appears to be where the Cowboys need it to be as the team prepares for battle with the Seattle Seahawks. Despite playing without his typical supporting cast, Prescott led his team to a road victory that has a chance to pay dividends in the postseason. Check out Prescott’s Pass Chart from the regular season finale victory:

This is a thing of freaking beauty…

Whatever possessed him and the play called during this game… give em some more of that on Saturday morning… pic.twitter.com/hjZCtuWkq2

Sturm pointed out that Prescott’s last two-and-half months have been among Dak’s best in regards to the deep ball. The Cowboys will certainly love to see that trend continue.

What if I told you 4 of the 7 most productive games in Dak Prescott’s career on deep throws have just happened in the last 2 1/2 months? Could it be that younger passers take a few years to see the whole field better? pic.twitter.com/lBEx4tGbQZ

Let’s see what Dak has in store this weekend.

Dak Prescott didn’t mince any words when he was asked how postseason success factors into a QB’s legacy. #cowboyswire pic.twitter.com/oO59RtZQMh