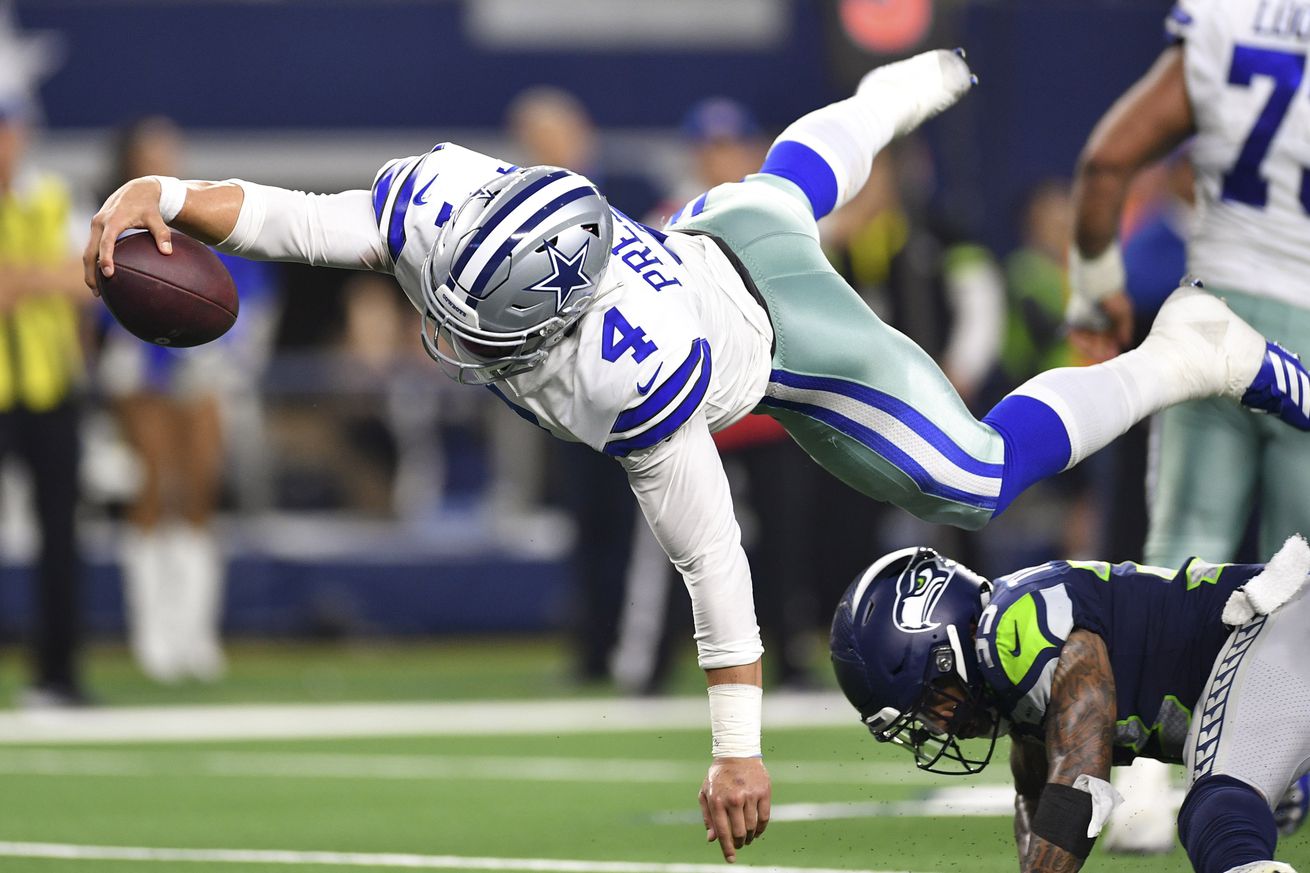 Here is your daily dose of Cowboys news on this glorious Victory Sunday!

The Cowboys defense did what it had to do, holding Seattle under its 26.8 points-per-game average, which was tied for sixth in the NFL. They limited the Seahawks to 299 yards of total offense, including slowing the league’s top rushing attack to just 73 yards on the ground. Quarterback Russell Wilson managed 233 passing yards and a touchdown for a 105.9 passer rating, but it wasn’t enough.

Because the Cowboys racked up 380 total yards and held a sizeable margin in the time of possession, 34:50 to 25:10. Ezekiel Elliott again proved to be the workhorse, as he picked up 137 rushing yards and added another 32 yards receiving, but he was joined by Amari Cooper, who co-starred by leading team pass-catchers with 106 receiving yards. Dak

Prescott had an efficient day, completing 66.7 percent of his passes for 226 yards with a touchdown and an interception for an 83.6 passer rating. But late in the game, when the Cowboys needed him most, the quarterback was even more impressive running the ball, finishing with 29 rushing yards on six carries with the game-clinching score.

Defeating Seattle Seahawks in wild card round – Clarence Hill Jr., Fort Worth Star-Telegram
The Cowboys’ young quarterback had a great game and showed the world he belongs behind center.

Prescott playoff ready Prescott was darn-near perfect in the first half completing 17 of 23 passes for 146 yards and a touchdown.

He again showed his focus in two-minute situations. After the Seahawks took a 6-3 lead with 1:43 left in the second quarter, Prescott drove the Cowboys 75 yards on 7 plays. Elliott did the heavy lifting with a 44-yard run on 3rd and 1. But Prescott was razor sharp, completing five of six passes, including a perfect 11-yard fade to Michael Gallup for the touchdown. It was an important redzone score for a Cowboys team that struggled to score touchdowns near the goal line all season.

After leading 10-6 at halftime, the Cowboys found themselves trailing 14-10 going into the fourth quarter. Prescott, as has done all season, brought them back with two touchdown drives.

He rushed six times for 29 yards in the game, including the game-deciding score from the 1 after just missing on flip following a 16-yard run. Prescott has 14 game-winning drives in his career, the most of any quarterback since 2016. This was the first in the postseason.

Prescott, Cowboys push past Seahawks for 24-22 wild-card win – Schuyler Dixon, Associated Press
It was a big win for Dallas and a couple of firsts for both quarterbacks.

The win for the Cowboys (11-6) was the first for Elliott and Prescott after losing a divisional game in their playoff debut as first-year stars two years ago. Dallas will play either New Orleans or the Los Angeles Rams in the divisional round next weekend. “It’s really just a chance to keep going on, simple as that,” Prescott said. “Me and this whole team, we want to win it all. You can’t do that without taking care of the first one. A lot of excitement, but my goal is bigger than just one playoff win.”

The loss ended a run of nine straight victories in playoff openers for the Seahawks (10-7). The Elias Sports Bureau says it was the longest streak in NFL history.

Cowboys run past Seahawks, into Divisional Round – Herbie Teope, NFL.com
What did we learn in Saturday’s victory? How about the realization that Dak is clutch!

1. Cowboys quarterback Dak Prescott effectively answered any question on whether he can handle the spotlight. With a defensive slugfest leaving the game in doubt, Prescott came up big in the closing minutes of the fourth quarter, scampering up the middle for a 16-yard gain on third-and-14 from the Seahawks’ 17-yard line. Prescott then punched it from the 1 on the next play to give the Cowboys a 24-14 edge with 2:08 left in the game.

The Seahawks didn’t help themselves on that drive, though, as two pass interference penalties on third down helped extend Dallas’ march down the field. But it was Prescott who placed the icing on the cake with a gutsy performance. In addition to scoring the game-winning touchdown, Prescott completed 22 of 33 passes for 226 yards and a touchdown with an interception. He added 29 yards rushing on six carries to help the Cowboys move on to the NFC Divisional Round of the playoffs, their opponent to be determined by Sunday’s clash between the Philadelphia Eagles and Chicago Bears.

THINGS THAT MADE ME GIDDY

Dak and Jason Garrett Deliver: It was supposed the be the playoff-tested Seahawks rising to the occasion in a close game late. Instead, Dallas thoroughly dominated the fourth quarter of this game (well, until Byron Jones lost his mind on the Seahawks’ final drive). That Cowboys Answer: After Russell Wilson got Seattle into the end zone for the first time, it seemed momentous in a game with so little offense. But man, the Cowboys answered with stunning ease, a nine-play, 67-yard drive (the last two plays were on the goal line), including a well-designed route combination that opened Amari Cooper up for a 34-yard catch.

National reaction to Cowboys’ playoff win over the Seahawks: ‘Dak is Latin for winner’ – Staff. SportsDay

What did Twitterverse have to say about Saturday’s game? Check out for yourself. Hint: there’s a lot of love for no. 4 and rightfully so.

Instant analysis: Three impressions from the Seahawks’ playoff loss to the Dallas Cowboys – Mike Vorel, The Seattle Times
Here are three quick takeaways, including the winners of the ground attack.

Second-year Seahawks running back Chris Carson entered Saturday’s wild card game with a streak of three consecutive 100-yard rushing performances. He was named NFC Offensive Player of the Month because of it. But January was a new month. And on Saturday night, against the NFL’s No. 5 rushing defense, Carson managed a measly 20 rushing yards on 13 carries. As a team, the Seahawks produced just 73 rushing yards, three yards per carry and one rushing touchdown, a significant drop from their season average of 160 rushing yards per game and 4.8 yards per carry. The Seahawks’ rushing woes contributed to Wilson and Co. converting just two of 12 third downs.

‘We was laying that wood’: How the Cowboys made sure Seattle’s offensive strength was anything but – Kate Hairopoulos, SportsDay
The Cowboys got a great performance on both sides of the ball.

In its 24-22 win to advance to the NFC divisional round, Dallas limited Seattle to 73 yards on 24 carries, 87 yards below its average and just 3.0 yards per carry. The lack of success on early rushing downs helped set up more challenging third downs – when the Seahawks were just 2 of 13. Quarterback Russell Wilson, hard as he is to contain, was limited to three rushes for 14 yards, though one did go for a touchdown.

Running back Chris Carson was held to 20 yards on 13 carries.

“We ran and hit,” Cowboys defensive end DeMarcus Lawrence said. “You hit the will out of somebody, you hit the power out of somebody, they ain’t going to want to run no more. The first time we played them I feel like he was running harder, faster, stronger. We was laying that wood today. Hats off to the defense for coming to play.” Lawrence and other Cowboys defenders contended that their performance against the run shouldn’t have come as a surprise. They entered the game No. 5 in rushing defense.

Cowboys Kris Richard on HC interviews: Gonna be a long day – Mike Fisher, 247 Sports
While the game is over, things are just heating up for Cowboys defensive backs coach, Kris Richard.

Richard, 39, is the top defensive assistant in Dallas under coordinator Rod Marinelli, and is the play-caller as well. Here, he defeated his old employer the Seahawks, who let him go last offseason after having been the defensive coordinator there. Richard said he harbored no ill will or revenge-minded thoughts regarding Seattle, where he once oversaw the Seahawks’ vaunted “Legion of Boom” secondary.

“It’s truly just another game,’’ he said. “I love the guys who are over there. It’s not personal. I don’t ever want to send guys like that home – but it’s part of the job.’’ Richard is considered a “hot’’ head coaching candidate, though he’s never before held that job. Some of his competition for the NFL openings have more experience. And others who are being considered in Tampa Bay, New York, Miami and elsewhere are also “hot’’ and credentialed. But Richard’s resume is outstanding, and he’s highly-thought of by those who play for him and coach with him.

Jerry Jones: Allen Hurns undergoing left ankle surgery – Herbie Teope, NFL.com
It wasn’t all good news for Cowboys fans as we lost Allen Hurns for the rest of the playoffs.

Wide receiver Allen Hurns suffered a gruesome lower left leg injury after hauling in a 14-yard pass from quarterback Dak Prescott on the Cowboys’ second possession in what was eventually a 24-22 win. Hurns received immediate attention, as medical personnel stabilized the left leg in an air cast.

Cowboys head coach Jason Garrett held Hurns’ left hand as medical staff tended to the injury before Hurns was carted off. “Obviously not a good situation for Allen. It’s a serious injury that he has,” Garrett told reporters after the game. “Allen’s in good hands. He’s going to come back. He’s going to play a lot of football for us in the future.”

Cowboys owner Jerry Jones told reporters that Hurns suffered a dislocated left ankle in addition to fractures and it was his understanding that Hurns was in surgery following the win.

NFL playoff schedule: Cowboys and Colts advance to divisional round; Dallas awaits opponent for next week – SportsDay
What’s next for the Cowboys? Well, it depends on the results of tomorrow’s action.

Should the NFC North champion Chicago Bears take care of business at home against the reigning Super Bowl champion Philadelphia Eagles on Sunday, the Cowboys would head to New Orleans next Sunday to face the top-seeded Saints in a rematch of a Week 13 game that Dallas won at home, 13-10.

A Philadelphia victory would serve two purposes for the Cowboys. The first is obvious. It would send them Los Angeles to play against the Rams, who went 2-2 in their last four games and don’t exactly look unbeatable right now, rather than New Orleans, where the Saints are practically unstoppable. But it would also give the Cowboys hope of hosting the NFC Championship Game. If the Bears win, the Cowboys would be the lowest seed left in the field. If the Eagles win, they would be at No. 6. Therefore, if the Cowboys and Eagles met in the NFC Championship Game, that game would be played in Dallas.

Jerry Jones says he’s rooting for the Eagles tomorrow, as it’d give the Cowboys hope of hosting an NFC title game.

Provided they can upset the Saints or Rams, of course.