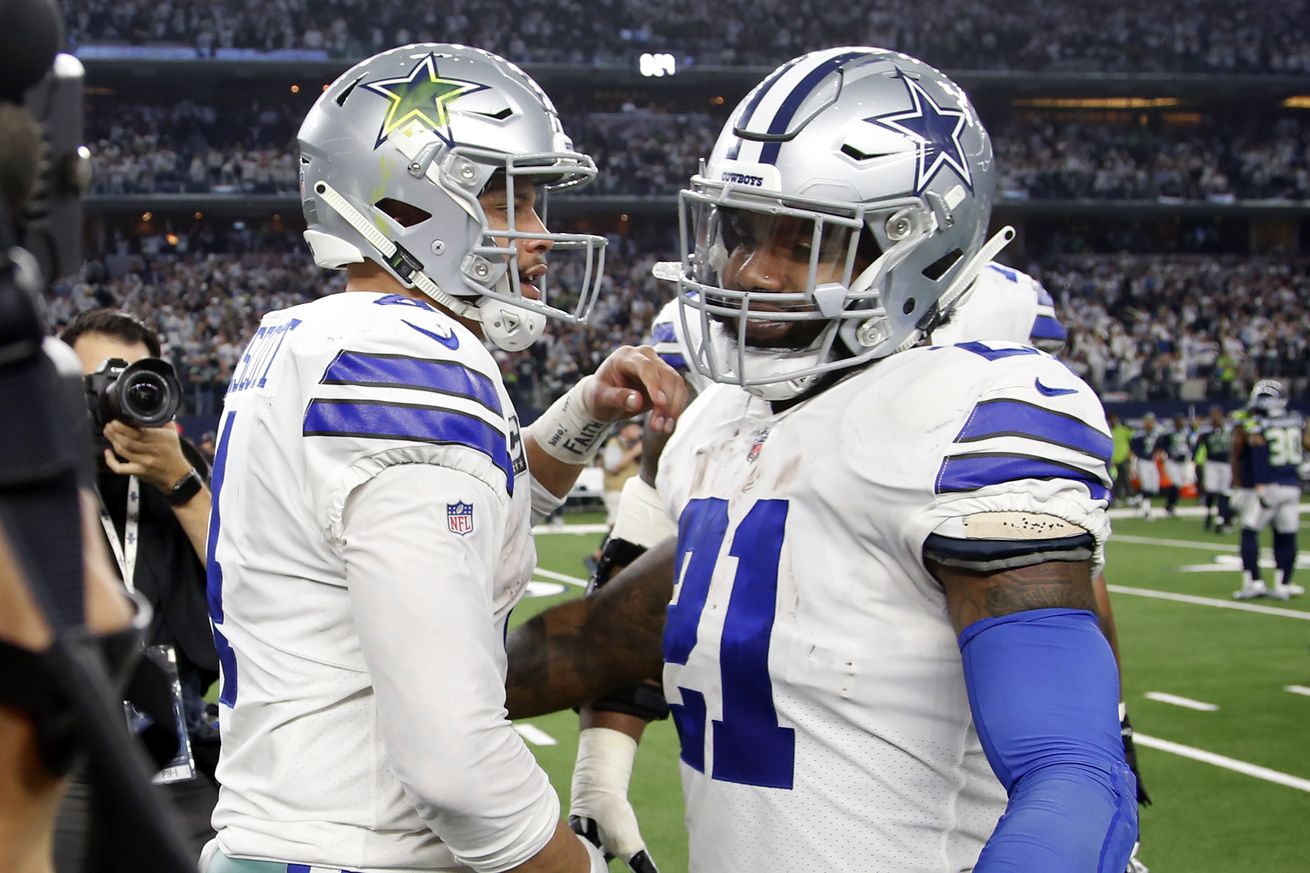 Do the Cowboys still have the worst odds to win the Super Bowl? – Peter Dawson, Star-Telegram

After a win at home against the Seahawks, what are the Cowboys odds now to bring home the Lombardi?

The Cowboys had the worst odds of any team to win Super Bowl LII heading into the NFL Playoffs (according to BetDSI.com).

But Dallas is moving on from the wild-card round to the divisional round thanks to a big win over the Seattle Seahawks on Saturday night.

The Cowboys will travel to Los Angeles to face the Rams.

In the other NFC game, the top-seeded New Orleans Saints will host the Philadelphia Eagles.

So, do oddsmakers give Dallas a better chance to reach the big game now that the playoff field has been re-shuffled?

Here are the latest odds to win Super Bowl LIII (per oddsshark.com):

Cowboys will face the Rams on Saturday night in the Divisional Round of the NFL playoffs – Cole Patterson, Blogging the Boys

The stage is set. The Cowboys will head to LA to face the Rams in the NFC Divisional Round game.

If the Bears had won, the Cowboys would be packing their bags for a date with the Saints in New Orleans next Sunday afternoon. If the rival Eagles came out on top on Sunday, then the Cowboys would fly to the West Coast for battle with Jared Goff and the Los Angeles Rams next Saturday under the lights.

Nick Foles kept his playoff magic alive and the Eagles knocked off the Bears behind a late game-winning touchdown and a missed field goal by the Bears with five seconds remaining in the game.

This means that the Cowboys will be heading to Los Angeles to take on the Rams.

The last time that the Cowboys and Rams battled in Los Angeles, Dak Prescott introduced himself to the football world for the first time back in a 2016 preseason game. After he was expected to be the team’s third-string quarterback, Dak was inserted to the starting lineup for the first preseason contest because Kellen Moore went down with a broken fibula earlier in training camp.

Cowboys teammates praise Dak Prescott for his play vs. Seahawks; Zack Martin: ‘I wouldn’t want anyone else being our quarterback’ – Jon Machota, SportsDay

Dak Prescott received a ton of praise from his teammates after their Wild Card win over the Seahawks.

Dak Prescott took off up the middle on a designed run that looked destined to get only four or five yards. Instead, the Cowboys quarterback avoided two tackles and then jumped to go over the top of a third. Prescott’s right knee was clipped as he left his feet, sending him cartwheeling through the air.

He landed at the one-yard line, giving the Cowboys a first down and setting up Prescott’s game-winning touchdown run on the following play.

Star running back Ezekiel Elliott called it the biggest play of the game.

”He played like a grown man,” Elliott added. “I’m glad to be his teammate. He’s a hell of a leader, hell of a player. I can’t wait to go win some more games with this guy.”

Cowboys No. 1 receiver Amari Cooper was asked in the postgame locker room if he’d prefer Prescott be a little more careful in those situations because of what he means to the team.

”I want Dak to be Dak,” Cooper responded with a laugh. “And that’s who he is.”

Defensive backs coach, Kris Richard, had HC interviews on Sunday. What are the odds he leaves for another team?

Since Sam Darnold is the hope and future of the Jets, it’s likely they’ll go with an offensive-minded head coach now in Year 2 of the young signal caller. Miami and Tampa could go either direction since they each have more veteran QBs (albeit still needing polish), and defensive talent to mold.

They may legitimately want him or It’s possible they are just kicking the tires and hoping to lure him as a coordinator (since he’s technically not even that in Dallas). But since the Dallas Cowboys can refuse any job offer other than head coach, the chances of him leaving for anything other than head coach is slim-to-nothing.

Cole Beasley status for Divisional Round in question with injury – Patrik Walker, 247Sports

Cole Beasley suffered a beating against the Seahawks. Could his status be in question for the Divisional Round?

Beasley now has a new ailment he’ll try to work through to remain available for the Cowboys, however, having not missed any games this season but going down against the visiting Seattle Seahawks in the Wild Card game. He’d return to the game after being evaluated by the training staff, but stated after the 24-22 victory he suffered a high ankle sprain, according to Clarence Hill, Jr. of Fort Worth Star-Telegram.

He’s hopeful he’ll be available for the Divisional Round, but that determination will be made later in the week.

For a shifty and quick slot receiver like Beasley, lower leg issues can put a real damper on his ability to get in and out of his routes. High ankle sprains are notoriously unforgiving in their heal time, usually hanging around longer than a low ankle sprain and are much easier to re-aggravate. Making matters worse is knowing Beasley isn’t completely healed from the sprained foot he suffered in Week 13 against the New Orleans Saints. He’s been forced out of several games in December and now to open January and while he’d return each time, it’s becoming a real uphill challenge for the usually-durable veteran to remain on the field.

Thoughts and prayers go out to Allen Hurns and his family. The initial report, sounds like he should make a full recovery.

”I’ll be good to go by the beginning of the season,” the wideout told NFL Network’s Jane Slater post surgery on his broken fibula.

Hurns joined the Cowboys during the offseason on a two-year deal after spending four seasons with the Jacksonville Jaguars. He finished the 2018 regular season with 20 catches for 295 yards and two touchdowns.

Yes, we’re onto the Rams, but let’s take a moment to remember some of the good things the Cowboys did against the Seahawks.

This offensive scheme has always worked best with a dynamic receiver and running back. Well, Ezekiel Elliott had 169 total yards – 132 rushing and 37 receiving – and Amari Cooper had 107 yards receiving on seven receptions. They also combined for the team’s three longest plays from scrimmage: 44, 34 and 27 yards.

Dak Prescott, as usual, did his best work at winning time. He directed two touchdowns drives, rallying Dallas from a 14-10 deficit in the fourth quarter. He completed his two longest passes of the night and ran six times for 29 yards and a touchdown, including a sensational 16-yard run on third-and-14 to set up the clinching touchdown in the final quarter.

Seattle led the NFL in rushing this season with 160 yards per game, but managed just 73 yards on 24 carries against the Cowboys.