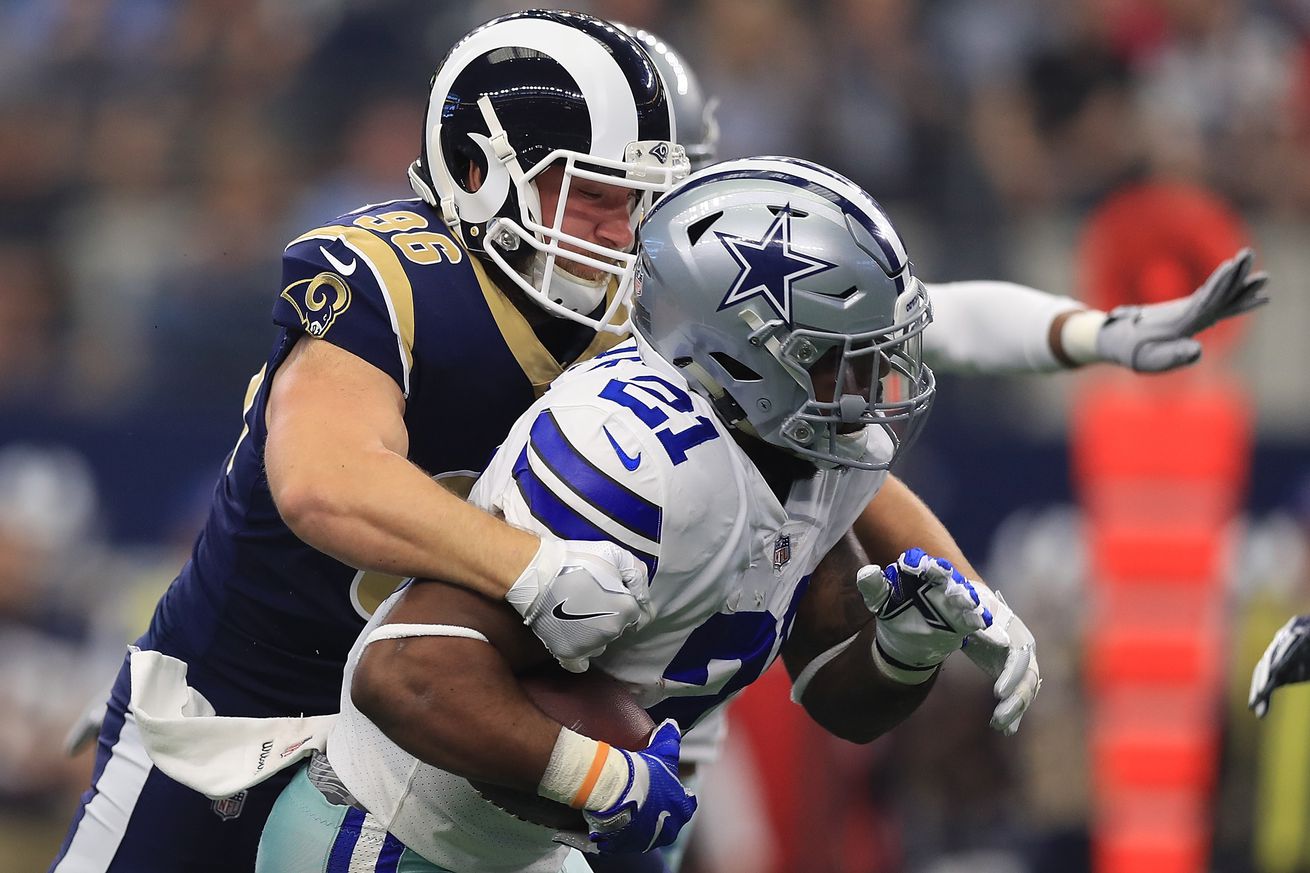 The divisional round matchup is now just two days away!

First, a matched pair of stories on what is going on with Kris Richard, coveted head coaching prospect.

Kris Richard visits: A pot of coffee & Cowboys plans to keep him – Mike Fisher, 247 Sports
With all the concern about Kris Richard getting offered a HC gig (the Miami Dolphins are the current big worry), here is a look at the Dallas plan to keep him.

Richard is in many ways the “co-coordinator” here. He calls the plays and his fingerprints are everywhere on this defense. All of that is a credit to the generous Marinelli, who has worked with Richard in Kris’ first season here much like he worked with Matt Eberflus before, sharing the duties in a way that resulted in Eberflus getting a promotion last offseason to become the Colts defensive boss. Now Eberflus is getting head coaching attention, just as Richard is.

If there is a way to keep Richard, Jerry Jones will “money-whip” him to do so. That factor is often taken for granted in Dallas, but not every organization does it that way. Jones once kept Jason Garrett here using this method (and all the other positives of being with “America’s Team”) and he’s done the same with scouting boss Will McClay and others, too. If it’s about title and responsibility, I bet Marinelli can be persuaded to massage all of that to benefit his new protege.

Marinelli 1-on-1: I’ll do what Cowboys need to keep Kris Richard – Mike Fisher, 247 Sports
Well, if you were worried about whether Rod Marinelli would be on board with doing what it takes to keep Richard, you can rest easy.

“I’ll do whatever the Cowboys need to be done for us to keep Kris Richard,” defensive coordinator Rod Marinelli tells me in an exclusive visit. “I only care about

Marinelli, 69, is legendary in NFL circles for his selflessness. In his lengthy career, he’s been responsible for the development of some of the best defenses, and defensive coaches, in league history. He believes Richard has “the right stuff” to be all of that, comparing him to the likes of former associates like Tony Dungy and Mike Tomlin. And so while he certainly doesn’t want to stand in the way of the 39-year-old Richard departing to run his own program with the Miami Dolphins or the New York Jets or wherever, he doesn’t see it as a personal sacrifice at all to shuffle some responsibility and some titles to keep intact a staff that has led Dallas to “elite” status on defense.

Now, on to the Rams game, starting with one more look back at the wild card win that actually points a way forward.

The Marinelli Report, wild-card edition: Cowboys rushing defense stands tall – Bob Sturm, The Athletic
While there is so much focus on the Rams passing game, they also had the third-best rushing attack in the NFL for 2018. Can the Cowboys handle it?

Well, you might want to consider what they did to the top running game in the league last Saturday.

Seattle was able to break one run of substance early in the third quarter, but for the most part, handing the ball to their top runner — who finished fifth in the NFL in yardage this season — yielded nothing.

Well, not nothing. Nothing might have been an upgrade, as they entrusted him with 13 carries and only found 20 yards. The team as a whole wasn’t much better, totaling 24 carries for 73 yards. Most teams would have given up that idea much earlier, but Pete Carroll and Brian Schottenheimer were insistent that they could eventually wear Dallas down.

Dallas Cowboys: Film Room: How the Cowboys can slow down Aaron Donald and move the ball on the Rams defense | Jon Owning, SportsDay
There is no question that the biggest challenge for the Cowboys’ offense is how to handle All-Multiverse defensive tackle Aaron Donald. Here is just one of the suggestions from this article.

If Dallas wants to slow down Donald this week, they’d be wise to do the same. Against teams that frequently used play-action (27.5 percent or more of dropbacks), Donald averaged 4.7 pressures and 1.2 sacks per game. Compare that with the fact that Donald averaged 7.8 pressures and 1.4 sacks per game against teams that didn’t frequently use play-action (less than 27.5 percent of the time), and it crystallizes why Dallas would be wise to run play-action.

Prescott’s ability to handle the Rams’ pass rush will be vital to Cowboys’ playoff survival | Mark Chichester, Pro Football Focus
It is not the most positive thing you could see, but this is an interesting look into how Dak Prescott fares under pressure. And with Aaron Donald waiting out in LA, that seems pertinent.

Through 17 weeks of the 2018 regular season, Prescott managed to complete 82-of-156 attempts for 1022 yards, nine touchdowns, and just two interceptions, and while the box score numbers paint him in a positive light, upon closer inspection we can see that 17.8% of his total attempts were negatively graded, which is the sixth-worst rate among quarterbacks in the league. However, while his play-by-play grading under pressure is underwhelming, it’s nothing compared to the sheer amount of sacks that he’s taking.

This year, Prescott was sacked 56 times after the defense managed to register pressure, and only Houston’s Deshaun Watson was sacked more (61). All told, Prescott took a sack on a whopping 24.8% of his pressured dropbacks, which is the league’s sixth-highest rate and almost double the rate of that oh so impressive rookie year. Making matters worse, 44 of those sacks came from a regular rush, as opposed to the defense sending an extra man, and 15 of those sacks were the result of Prescott holding onto the ball too long – both of which lead the league’s quarterbacks.

Ezekiel Elliott could be Cowboys’ key to stopping Rams’ Aaron Donald – Jori Epstein, USA Today
There is another way Dallas might seek to counter Donald and company.

Pro Football Focus ranked the unit third best among defensive front sevens this season (after the Philadelphia Eagles and Jacksonville Jaguars). A Cowboys’ offensive line that struggled with consistency dropped from fourth to 14th in a year.

Capitalize on a leaky run D.

The Rams’ 122.3 rushing yards per game this season ranked 23rd in the league. Their 5.1 yards per carry allowed ranked dead last.

“Teams that have been successful have done the little things right, executed, hit some big runs against them,” Martin said. “At the same time, you can’t look at that stat and think it’s going to be easy sledding running the ball.”

Will Cowboys’ Ezekiel Elliott outrun Rams’ Todd Gurley in divisional round? – Michael C. Wright, Dallas Cowboys Blog- ESPN
Both the Cowboys and Rams rely on their running game. Ezekiel Elliott had some words about that and his counterpart with the enemy, Todd Gurley.

Standing barefoot outside the locker room on a small podium Wednesday, Elliott downplayed the notion that the winner of Saturday’s matchup between the Cowboys and Rams (8:15 p.m. ET, Fox) could be decided by which back puts forth the most dynamic performance. But for a team like the Cowboys, built on running the ball and playing solid defense, it could really be that simple.

Especially when considering the Rams surrendered a league-worst 5.1 yards per rush this season, including 3.1 yards before contact, which ranks as second-worst in the league, according to ESPN Stats & Information. The Rams also gave up the second-highest total QBR (72) on passes to running backs during the season.

“We both go in with the same mindset,” said Elliott, who grew up a Rams fan. “[It’s] playoff football. It’s about the team, it’s not really about individuals. It’s about trying to go get that Super Bowl. Yes, it’s going to be great facing him. But I’m not going to put too much emphasis on that.”

Gurley might have a harder time gaining ground on the Cowboys, who allowed just 3.8 yards per carry, which was the fifth-lowest in the NFL, according to ESPN Stats & Information. Dallas allowed a league-low 2.02 yards per rush before contact. The Seahawks led the NFL in rushing, yet averaged just 3.0 yards per rush against Dallas in their wild-card loss.

Amari Cooper vs. Marcus Peters will be matchup to watch on Saturday – Marcus Mosher, Fansided
One of the key matchups for the Cowboys and Rams is dangerous cornerback Marcus Peters, who has 22 career interceptions, against wide receiver Amari Cooper, who kinda saved the Cowboys season.

Because Peters struggles with quickness, it forces him to play in a lot of off-coverage. Now, that isn’t always a bad thing, because Peters is one of the best cornerbacks in the league at reading routes and route combinations. He has an innate ability to see and understand what is happening in front of him. Being the gambler that he is, this will often lead Peters to jump a lot of underneath routes.

While he has had a ton of success doing this throughout his career, it leads to him being vulnerable to double moves. When Cooper was with the Raiders, he had a lot of success getting open on double moves against Peters.

Should Tavon Austin’s Role Get Expanded Against His Former Team? ✭ Brain Martin, Inside the Star
Could a return to LA to play the team that originally drafted him lead to a big game for Tavon Austin, whose debut season in Dallas has been marred by injury?

I really like that the Dallas Cowboys chose to go with Tavon Austin as their punt returner over Cole Beasley, but I can’t help but want more. That is why I believe they should expand #10’s role even more and get him involved on offense this week against his former team, the Los Angeles Rams.

Tavon Austin is just so special in the way that he can change the game with his rare speed and elusiveness in the open field. That’s why the Rams drafted him eighth overall in 2013 and why the Cowboys traded for him in the offseason. Unfortunately, no one has really been able to figure out how to tap into all that talent so far in his NFL career.

Cowboys are California dreamin’ – Richie Whitt, Press Box DFW
Maybe it’s just me, but I think this is a really big factor for the game.

I was in the Coliseum in 1992 when the Cowboys played the then-Los Angeles Raiders and the crowd of 92,000 was at least half pro-Dallas. Expect a similar showing Saturday. Cowboys fans don’t only travel, they’re imbedded. [sic]

The Cowboys’ last Super Bowl win came in the 1995 season, the first year of a two-decade NFL hiatus from LA. With no “home” team, many Angelenos adopted “America’s Team.” Other than a preseason game in 2016, those fans haven’t seen their Cowboys in a long time.

(And I bet no one accuses HIM of doing it from his Mom’s basement.)

I have officially met the biggest Dallas Cowboys fan ever. He doesn’t have social media , but his name is Jose Hernandez, and this is his back yard in El Paso, TX. @dallascowboys @dmn_cowboys @CowboysNation @dalehansen pic.twitter.com/ID8WMYoQxq