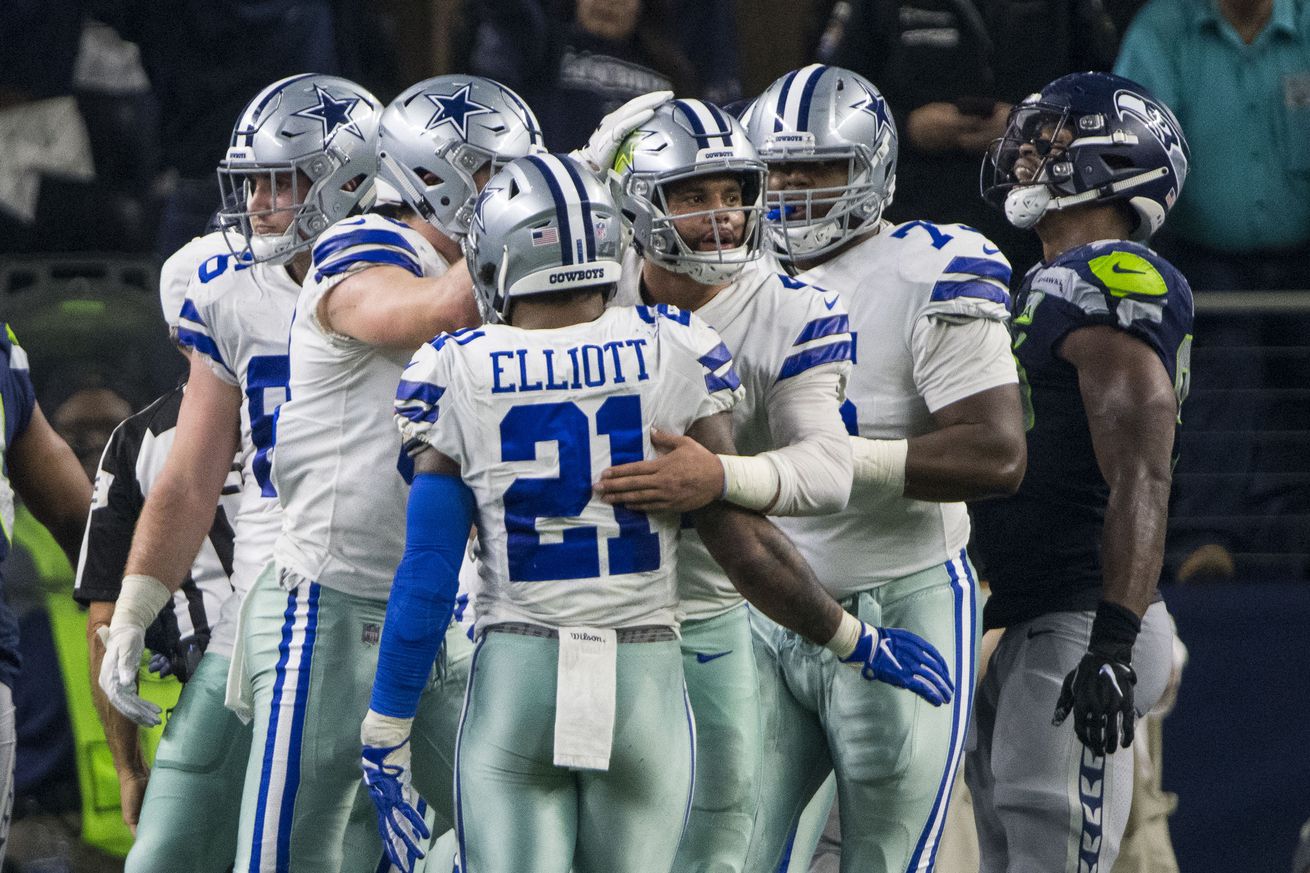 Get ready Rams, the Cowboys are coming.

There’s no denying the greatness of the 2018 Los Angeles Rams, but to think the Cowboys have no shot this weekend in the Divisional round would be a huge mistake. When looking at the Rams in 2018, their offense was absolutely incredible. They finished the season ranked second in total yards (421.1), second in points per game (32.9), fifth in passing yards per game (281.7), and third in rushing yards per game (139.4). Scary right? Of course, but there’s reason to believe the Cowboys defense can overcome all of this with a good outing on Saturday Night.

In the first six weeks of the season, Jared Goff was an MVP candidate, and looked to be one of the best quarterbacks in the league. His numbers in those first six weeks were absolutely remarkable and his averages per game looked like this:

Play 1 – Play-action from a clean pocket

The first thing you’ll notice on this play is the play-action fake. The Rams are a heavy play-action team, and lead the league in play-action percentages with 34% of their passing plays coming off of the play-fake. The second thing you’ll notice is a squeaky clean pocket to throw from. Due to the clean pocket, Goff is able to take his drop, hit his back foot, and deliver a beautiful ball to wide receiver Cooper Kupp, which thankfully, the Cowboys will not have to deal with. Now let’s take a look at a similar play that happened later in the season.

Play 2 – Play-action with some pressure

The route-concepts, and defensive coverage is a little different on this play, but the point still remains the same. If you want Jared Goff to make mistakes you have to apply consistent pressure. Rod Marinelli and Kris Richard aren’t huge fans of blitzing, but this is a week we may see those dialed up a bit. With the amount of plays the Rams will run play-action, dialing up a blitz on those long developing passing plays can throw the Rams offense completely out of whack.

2. Getting Dak Involved in the Running Game Early

I feel like a broken record at this point, but the point still stands. DAK PRESCOTT DOES NOT RUN ENOUGH IN THIS COWBOYS OFFENSE. Now that we got that out of the way, let’s take a look at why the Cowboys need to incorporate Dak’s legs more come Saturday Night.

First off, in games that Dak Prescott scores a rushing touchdown the Cowboys hold a 16-3 record. With zero context included, the Cowboys almost always win the football game when Dak Prescott punches it in on the ground. Second, in games in 2018 that the Rams defense faced a “mobile” quarterback, their record was 3-1 (CHI, KC, SEAx2), but in those games the quarterbacks involved combined for 21 carries and 143 yards. In those games, the Rams also gave up 31 against the Seahawks twice, 51 against the Chiefs, and 15 against the Bears, that leaves them only outscoring their opponents 134-128.

One of the biggest reasons getting Dak’s legs involved early will be key is due to the way the Rams play defense. I’m sure you’re aware of how disruptive the Rams front seven can be against the pass, and that is in large part due to how aggressive they are getting up field. The Cowboys broke it out some in the Wild Card Round, but incorporating the QB sweeps and QB draws would be a great way to combat Los Angeles’ aggressiveness when rushing up the field. If Ezekiel Elliott is finding success running the football (which we should all expect him too), adding Dak’s legs to the game will not only slow the Rams pass rush down, but also give those undersized linebackers a little more to think about before they can flow to the football.

Everyone loves Ezekiel Elliott, and everyone should. Zeke is without a doubt one of the best running backs in the game, along with Todd Gurley. The one thing the Cowboys need to try and not do is overfeed Ezekiel Elliott. Before you call me crazy, hear me out.

The Rams have one of the worst run defenses in the NFL according to the statistics. In 2018, the Rams rank 23rd in the NFL in total rushing yards given up (1,957), and 32nd in the NFL in yards per attempt (5.1). The last thing you want to do against a team that is bad at something, is tip your cap and let them knows it’s coming more often than naught. No matter what the stats say, if the Cowboys go into this game with a “run it right at them approach” it’s not going to work. With Aaron Donald, Ndamukong Suh, and Michael Brockers standing on the other side of the ball, keeping them guessing will be a huge factor when deciding this game.

For example, Ezekiel Elliott biggest run of the game last week against Seattle came at a time the Seahawks weren’t expecting the run. The Cowboys were in their two-minute offense and were looking to move the ball quickly hoping to at least get into field goal range before the half. On this drive, Prescott out-touched Elliott 6 to 1. Elliott’s one carry was the 44-yard run that set the Cowboys up for a 11-yard touchdown pass to Michael Gallup. You could say the Cowboys passing attack lulled the Seahawks defense to sleep before a run outside for 44 yards. While I’ve heard a lot of people this week say they hope Zeke’s gets 30+ touches on the ground, and while the stats say that is exactly what they should do, that may be feeding right into what the Rams defense wants.

Shutting down Todd Gurley is impossible, let’s get that out of the way right now. Containing Todd Gurley is possible and that is exactly what the Cowboys defense needs to try to do. In the Rams three losses in 2018, Gurley was held under 100 yards and 20 carries in each of those games. Two of those losses came at the end of the year dealing with a knee injury, which is something he still is dealing with. But containing Gurley on the ground isn’t the only thing the Cowboys defense has to focus on. Gurley is one of the best receiving running backs in the NFL and he can completely take over a game not only as a runner but also as a receiver.

As we talked about earlier, the Rams use a lot of play-action to attack opposing defenses down field, they also use the screen game off of play-action. While applying pressure to Jared Goff is also one of the key factors in winning the game, not getting too aggressive and allowing Gurley to leak out on the screens is going to be just as important.

This game is by no means going to be a cake walk for either team, but the Cowboys matchup better with the Rams than most people want to realize. If the Cowboys defense plays a similar game that they did against the Saints, the Cowboys will win this football game. That all comes with putting pressure on Jared Goff, containing Todd Gurley, and playing smart disciplined football.