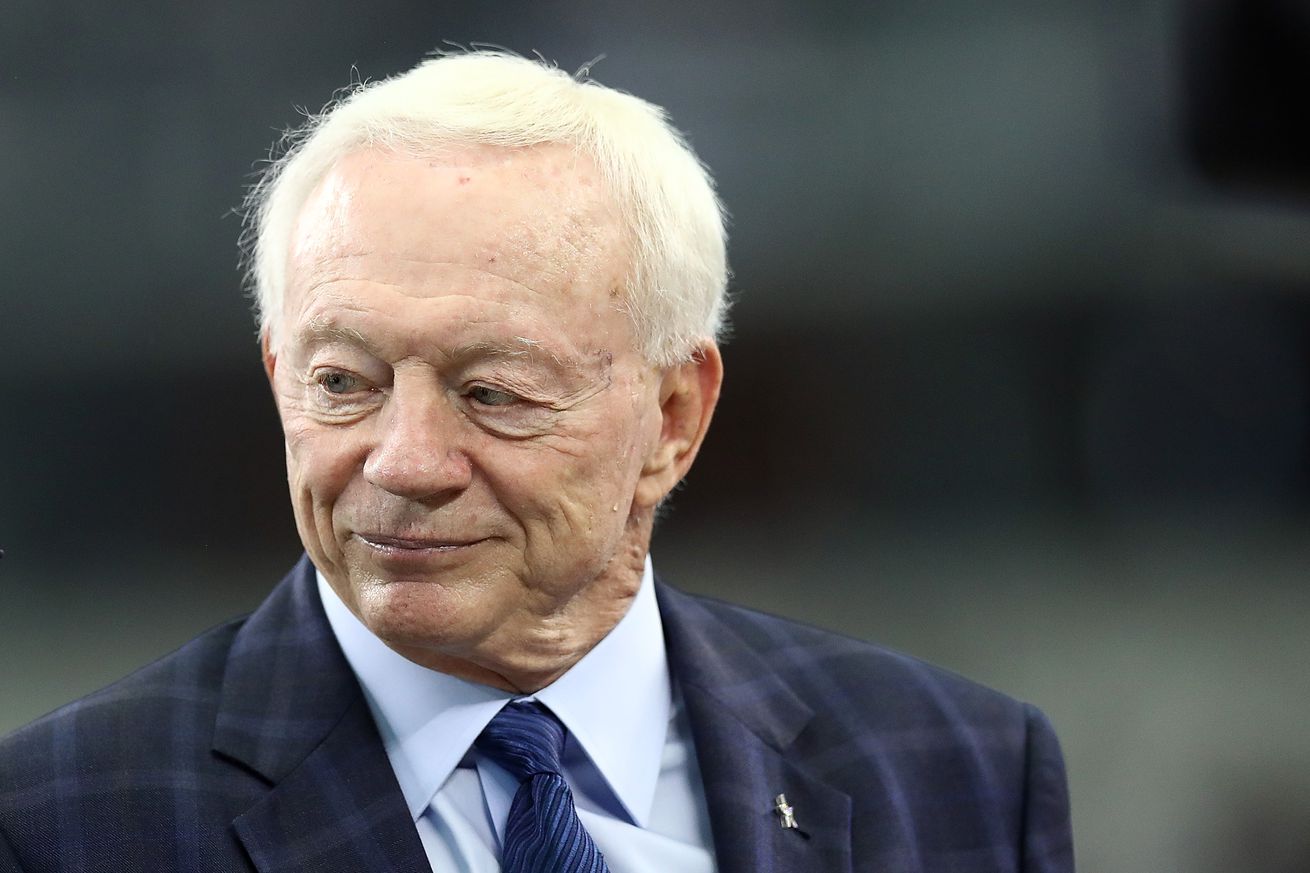 It’s a simple thing that so many just don’t grasp.

Some things you can just depend on. They happen every year, The swallows come back to Capistrano. The buzzards return to Hinkley. And the media fails to grasp the role of Jerry Jones, owner and general manager of the Dallas Cowboys.

It is not hard to see why Jones garners a lot of criticism in down years, since he has made himself the ubiquitous face and voice of his team. But even when he is being praised for the things he has done well, as he is with his team now in the divisional round of the playoffs, he still usually gets some shade thrown his way in the process.

This was the case in a recent Sports Illustrated article about the roster Jones and his staff have built. It had some good things to say, such as this.

In last week’s 24-22 wild-card win over the Seahawks, Dallas started 17 players on either side of the ball that were drafted or signed as undrafted free agents by the Cowboys. Just three of the 22 starters had been acquired in free agency; two had been traded for.

It also credits him for some risky moves that have paid off, such as drafting Randy Gregory and Jaylon Smith when many teams had them off their boards (for very different reasons), making Leighton Vander Esch the first-round pick last year, signing La’el Collins, and the Amari Cooper trade. It had to mention some of his more spectacular failures in the past, of course, since those are part of his history.

But it also had this.

Yes, Jerry has been a meddler for years in Cowboys’ personnel decisions.

That, for me, is what you call a trigger.

A brief diversion into personal history. I got into this whole blogging thing back in 2011. That was the year of the lockout, and for the Cowboys, it was year one of Jason Garrett’s tenure as the official head coach (he had of course served eight games as the interim HC in 2010). The lockout meant there was a dearth of football news, creating a bit of a vacuum for content. And some of the things that were being written/posted about Garrett and Jerry were driving me a bit bonkers. I started as a fan poster here at BTB, and several of those articles were about how the “real” media mischaracterized their relationship and roles withing the organization.

Now, thanks to Dave Halprin offering me this soapbox and the support of others that were here back then (including the incomparable One Cool Customer), I’ve been doing this for eight seasons – and the “real” media still gets it wrong.

Let me put this simply: Jerry Jones is not just the owner. He is, by his own choice, also the general manager. And a general manager doesn’t “meddle” in personnel decisions. He MAKES personnel decisions. There is no owner meddling in Dallas because of the unique role Jones has carved out for himself due to him owning the block of wood and the knife.

And yet, we still see lazy, unthinking remarks like that in reports in major outlets that insist we respect them because they are major outlets.

Jones has at times been maddening, and those of us who have been around for his entire time as owner of the Cowboys have suffered through some excruciating growing pains. But the growth has been real.

Admittedly, some do get it. At The Athletic, Calvin Watkins also wrote about Jones’ role in building this team, and his take gets it right (in my opinion).

He remains the Cowboys’ final decision-maker; that’s never going to change. But he’s increasingly leaning on his son Stephen, now the team’s executive vice president. It was Stephen Jones who pushed his father to release Terrell Owens. Stephen sat next to his father in the war room, persuading him not to draft Johnny Manziel. Earlier this year, Stephen informed his father that it was time for Dez Bryant to go.

The Cowboys’ fortunes would be very different if Jerry Jones hadn’t listened to his son and other important advisors in the organization. When the Cowboys needed to revamp their offensive line, Jason Garrett led the charge. Will McClay, the team’s assistant director of player personnel, has emerged as a trusted voice in scouting college players as well as professionals. In April, McClay made sure the organization drafted linebacker Leighton Vander Esch as a possible Sean Lee replacement.

None of these moves guaranteed the Cowboys a championship, but they each brought Dallas incrementally closer and they showed the elder Jones’ willingness to delegate. He’s finally willing to listen to his football people and make necessary changes for the betterment of the team.

“Of course, absolutely, and I’m not trying to be modest,” Jones said. “I’m not trying to be anything. There is no question we’ve had to adjust. You’re thinking as the time has gone along, the rules have changed, the time has changed. We had to change our colors basically; went from not having free agency to free agency. It was a different deal when we walked in here and people couldn’t move under the contracts, then by the time we got our feet up under us, then people started to shuffling around.”

Watkins has not always been so positive in his view of Jones, but he has been part of the Cowboys beat for a long time. His superior perspective (again, in my view) is probably because of that extensive exposure. He has seen the good and the bad up close. And he has not been observing from a distance while subscribing to the memes that so many in the national media are apparently unable to shake.

It is a good thing that Jones has grown the way Watkins described. All other teams have owners, but no other team BELONGS to their owner the way the Cowboys belong to Jerry.

He has done a lot of good in the past several years. Perhaps nothing is better than his acceptance of his responsibility for the team. He doesn’t finger point or scapegoat when things go wrong. He literally takes ownership of the issues, and sets out to fix them. The trade for Cooper was a great example. No one got thrown under the bus by him (while some of us out here in social media may have been standing on the sidewalk behind Scott Linehan waiting for our opportunity to give him a shove into traffic). He conferred with his brain trust, picked a solution, and went with it.

Both the articles quoted above do speak to how much Jerry’s triumvirate of lieutenants contribute. This does not detract from what Jerry has accomplished, however. He was the one who convinced his son Stephen to join him in running the team as a family effort. He selected Jason Garrett to be his head coach, and stood behind him through some disappointing seasons. And he opened his checkbook to make sure Will McClay is perfectly content to stay in Dallas rather than go somewhere else for a more impressive title and increased visibility. Jerry built this team, kept it together, and now has turned more of the decision making over to them. Wisely.

To sidetrack for a moment, McClay is one reason that the Kris Richard situation may still work out in Dallas’ favor. The overwhelming consensus is that McClay could easily find a job as the GM with another team if he chose to move on. He hasn’t done so, and that seems to be for two reasons. The first is the money, with Jones reportedly remunerating him quite well. The second is the organization he works for. This is partly respect he gets, and partly the recent stability and lack of drama in Dallas, plus perhaps the prestige of being a key part of the flagship franchise of the NFL. Those are all factors that come into play for Richard. Does he want the head coaching job enough to go to a team that is clearly experiencing more problems, with an owner who is almost certainly not going to be as generous as Jones, and who probably has less patience for him to clear up the issues that led to the position being available in the first place? Just look at what is going on in Washington if you need any proof that there are franchises that are entire orders of magnitude more dysfunctional than the Cowboys have been for some time.

Bill Callahan and Jim Tomsula could be next to flee Redskins Park, per @Russellmania621: “What I was told at the time was they are done, they are tired of the three-ring circus. They don’t want to be here.” https://t.co/RZNdMmFnx0

I’m not claiming everything is perfect at the Star, since NFL staffs and rosters tend to be full of alpha-type personalities, so some conflict is inevitable. But the Cowboys do as good a job of handling that as anyone.

Which just circles back to the role Jerry Jones has played as owner and general manager. He has made the environment of the Cowboys one where staff and players seem to truly enjoy belonging. One of the faults cited in the articles above is that he can be too loyal, but of late the leavening effect of Stephen, Garrett, and McCay seems to have helped. While it is hardly universal, anecdotal evidence is that many in the NFL, both staff and players, would jump at the chance to work in Frisco and Arlington. Just ask Amari Cooper, or, totally at random, Earl Thomas.

This is the team Jerry has indeed built. The fact he has learned to take more of a supervisory role and leave the day-to-day operations to others is not a knock on him. Rather, it is a sign of just how much he has grown into his role of running a multi-billion dollar sports and entertainment empire, where all the bucks eventually land on his desk. And, it must be added, in his net worth.

That multifaceted aspect, where AT&T Stadium and the Star in Frisco are sources for many other revenue streams outside the Cowboys, has been criticized as well for diverting his attention. Yet there is no doubt the NFL football franchise is the heart and soul of Jerry’s ever-growing empire. It is nearest and dearest to him at all times. Winning NFL games and titles has always been job one. It has taken him a long time to learn how to do that since the departure of Jimmy Johnson during a time of change for the league, and we will have to see some sustained success to declare him really successful in the long transition. But being in the divisional round is certainly a nice start. Give credit where credit is due.