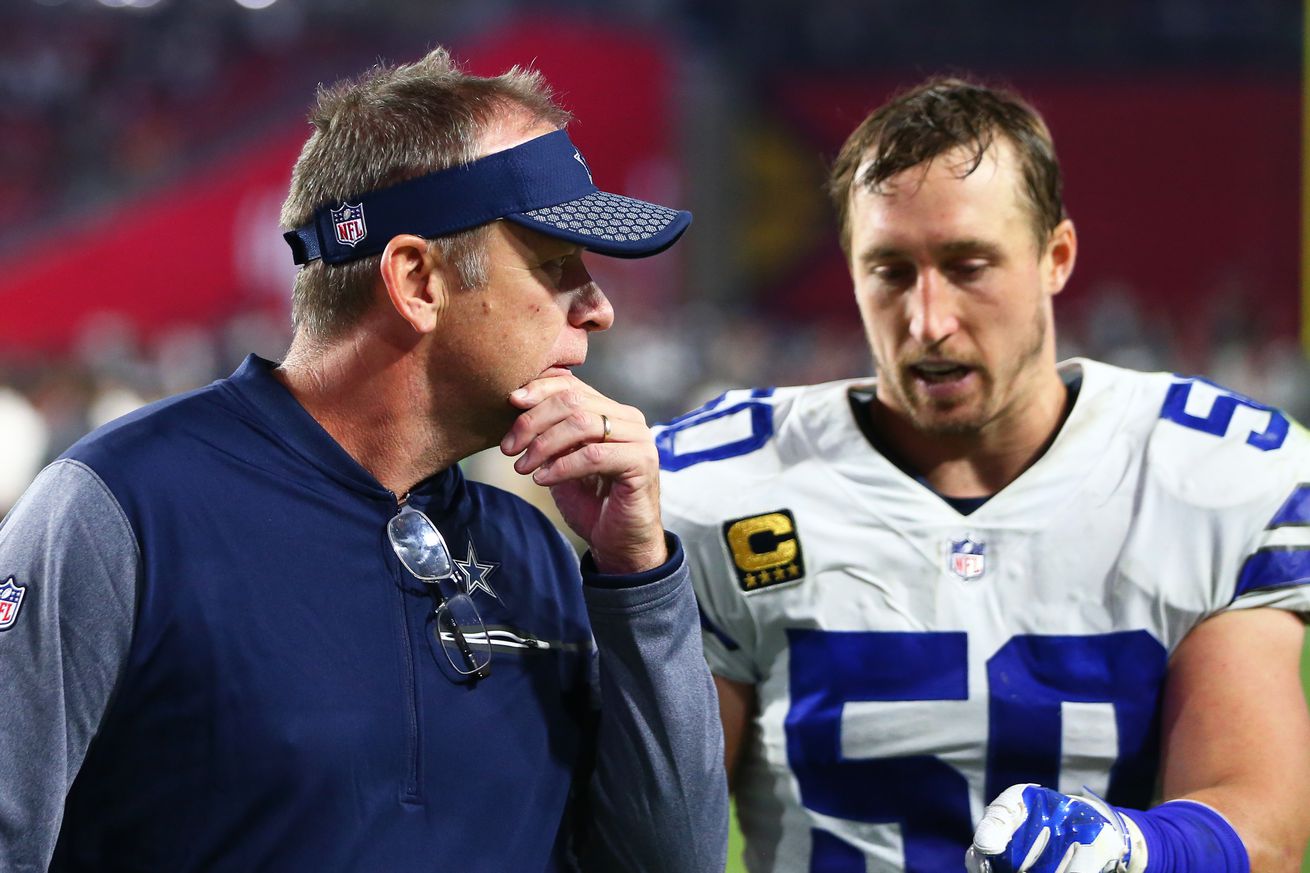 Scott Linehan has got to go! How the Rams highlighted the Cowboys OC’s failures with Dak Prescott – Matt Mosley, SportsDay

There are plenty of observers who think that Scott Linehan failed Dak Prescott and the Dallas Cowboys offense.

No, I’m serious. It’s time for Scott Linehan to find another press box. The fact that the lumbering Jared Goff iced the game on a designed run highlighted Linehan’s failures with his own quarterback. Dak Prescott, who played well Saturday, loves to punish defenders with his powerful frame. With the Rams hellbent on stopping Zeke Elliott, it only made sense for Prescott to take off a few times. Instead, he ended up with three rushing yards that came out of desperation late in the game. I think Linehan has done some good things with the Cowboys, but he’s not kept up with the latest trends across the league. Jerry Jones wanted Linehan to study the college game this past offseason and adopt some of those concepts. But this offense still felt stale throughout much of the season.

What we know for sure is that Jones is committed to Prescott as the long-term answer at quarterback. It’s time for the Cowboys to bring in a coach/play-caller who will maximize the quarterback’s talent. Linehan had a pretty good run with the Cowboys, but it’s time to freshen up the offense.

It needs to look a lot more like what the Rams did Saturday night. Does McVay have any college buddies who haven’t been hired?

Perhaps Jerry’s refusal to talk to the media following the Divisional Round loss is a peak into what happens next.

Jerry Jones has nothing to say right …yet.

That in and of itself should send a very real chill down the spine of everyone whose paycheck arrives stamped with his signature, especially considering what happened shortly after he went dark midway through the season. On the heels of a second loss in three weeks for the Dallas Cowboys, in which the game was decided by play-calling and a decision to go uber-conservative instead of taking a shot at snatching victory from the jaws of defeat, deciding to punt in the waning moments of the Week 5 contest against the Houston Texans to force overtime would prove to be a fatal decision. They’d go on to lose 19-16 and while Jones attempted to not second-guess the play-calling, but he made it clear that was a time to “take a risk”.

Yes, that was smoke you smelled.

The only way for the Cowboys to get better is by moving on from Scott Linehan – David Howman, BTB

If the Cowboys want to take the next step, moving on from its current offensive coordinator seems to be the consensus.

And of course, there’s that play Linehan called right before the touchdown. The clock was stopped after a pass interference penalty in the end zone, and the Cowboys got it at the goal line with 2:43 left in the game. Conventional logic in this situation says to spread things out and take a shot in the end zone; if you score that’s great, but if it falls incomplete then at least the clock stops. But no, Linehan lined up in a goal line formation and had backup tackle Cam Fleming check in as eligible before running it up the gut. Elliott got stuffed, predictably so, and 32 seconds ran off the clock before Dak ran in for the touchdown on the next play.

These examples are just the tip of the iceberg in the tenure of Linehan as the offensive coordinator. He seems to lack situational awareness and certainly hasn’t displayed an understanding of what his offense’s best skills are. Worst of all, though, is that the Cowboys offense under Linehan has become stale and predictable. After all, the Rams defense allowed more yards per carry in the regular season than any other team in the NFL, and Elliott only averaged 2.3 yards per carry. That is unacceptable.

The good news is that the Cowboys are an incredibly talented team on both sides of the ball, and with most of their stars still at a young age, this team’s future is very bright. But one thing has become clear during the course of the 2018 season: the only way for the Cowboys to reach the next level is by getting a better offensive coordinator.

If the Cowboys are keeping Jason Garrett, the least he can do is quit coaching like it’s 2016 – Kevin Sherrington, SportsDay

Sherrington weighs in on Jason Garrett.

Even if it looks like Garrett is going to outlast yours truly, the least he can do is accept this lowly counsel:

Sure, that offensive approach helped a fourth-round rookie quarterback put together a historic season. Didn’t put too much on his back. Let one of the best offensive lines in football maul opponents up front, then watch Zeke Elliott justify the fourth pick of the draft.

Since those halcyon days, however, it’s become apparent that the World’s Greatest Offensive Line no longer earns the title. Not even close. Tyron Smith is still very good, but he’s not a dominant left tackle anymore. Even if Travis Frederick returns next season from Guillain-Barre syndrome, the Cowboys can’t assume he’ll be the same. At some point they’ll also have to ask themselves if La’el Collins is really a right tackle or if he’s better back at guard.

Wait, Rod Marinelli plans to be the defensive coordinator next season?

But Marinelli, 69, took umbrage when asked if he wanted to step aside.

”Why do people keep asking me the same question?,” he said, as a large group of media swarmed Richard nearby. “I can’t figure it out. Can somebody tell me why everybody asks me that? I would tell you. My age? You gotta be kidding me. Do you ever see me come out and not be energized and be ready to play? So why ask me that? I’m tired of answering that.”

Told of the report that Richard could be named defensive coordinator, Marinelli didn’t slow his fiery response.

”I’ve never heard of that. If you believe [the report] and not ask me? …I answer everything every week. …I never skirt an issue. For some guy to say, or doesn’t know me, doesn’t know the situation, haven’t come and ask me. Isn’t that embarrassing? To me it is. I’ve never ever shied away from a question. …

If you were not already frustrated enough.

How did L.A. put together such a dominant performance against a run defense that ranked fourth best in rush yards allowed per attempt (3.8) and fifth best in run defense DVOA this season? Anderson and Gurley deserve credit for the romp, but so too does L.A.’s underappreciated offensive line, which submitted one of the best blocking performances by any team this year. The Rams’ run-blocking has been great all year, and in this game they had a secret weapon: They knew what the Cowboys’ defense was going to do before the ball was snapped.

“They’re a defensive line that really likes to move a lot,” right guard Austin Blythe told The Ringer. “We had a pretty good tell when they were going to do that.”

The Cowboys don’t blitz often under defensive coordinator Rod Marinelli, so they rely on stunts with their four defensive linemen to disrupt the backfield. A stunt is when a defensive lineman (or usually multiple defensive linemen) attacks a different gap than the one he is lined up across from. The goal is to confuse opposing offensive linemen by having multiple defenders crash to a different spot than expected and then use the chaos to disrupt the backfield. But stunts depend on the element of surprise, and during Los Angeles’s film study in the week leading up to their game against Dallas, the Rams discovered that the Cowboys defensive line was tipping whether they were going to stunt based on how they aligned before the snap.

Sean Lee has “to figure things out” about playing future – Josh Alper, PFT

Are we going to see Sean Lee in silver and blue again?

Whether Lee is part of the Cowboys future in any form sits alongside the question of whether he’ll continue playing for anyone as things for Lee to mull over in the near future.

“We will see. I am going to take some time and think about it,” Lee said, via the Fort Worth Star-Telegram. “Obviously, staying healthy is something I need to do if I want to keep playing. But I do love playing the game. I love the organization. We have to figure out the future. There is a decision. I need to talk to my family. And see what the deal is Cowboys wise. We have to figure things out.”

Lee has a $7 million salary and a cap hit of $10.075 million in 2019. The least likely outcome for Lee would seem to be his return at that price tag and the Cowboys would get $7 million in cap space back if they did release Lee in the coming weeks.

Sean Lee returning to the Cowboys next season? LB will wait to ‘figure things out’ after loss to Rams – Jon Machota, SportsDay

It would be weird to not see 50 on the field, but with the Cowboys having two young studs at the linebacker position, will the team feel the need to bring back the veteran Lee?

“I feel as good physically as I’ve felt in a long time,” the two-time Pro Bowler said last week. “Really since probably middle of the season. I’ve gotten better and better physically and I’ve been able to practice.”

Lee was also on the field in the second half, including the Rams’ game-sealing drive in the final minutes of the fourth quarter.

Although Lee was a full participant in practice all week for the first time since injuring his hamstring in Week 9, his playing time wasn’t expected to increase significantly Saturday night.

There was a time not long ago when the Cowboys couldn’t win without Lee on the field. But with the emergence of Smith and Vander Esch this season, Dallas found a way to go 8-1 without Lee during the regular season.

If the Cowboys had to lose, I’m glad that Philly did, too.

Philadelphia took over possession at its own 42-yard line, and Foles immediately moved the ball with a pass to Zach Ertz and a roughing-the-passer call that moved the Eagles to the Saints 27.

On second-and-10 with 2:02 remaining, Foles looked to a wide-open Alshon Jeffery, who found a soft spot in the middle of the Saints zone defense.

Foles hit Jeffery with a perfect pass that would have gained a handful of yards and likely set Philadelphia up with third-and-short on the other side of the two-minute warning.

But the ball went right through Jeffery’s hands into the waiting arms of Saints cornerback Marshon Lattimore, who secured his second interception of the game.

RT IF YOU HATE THE EAGLES pic.twitter.com/ygVCh5USBJ