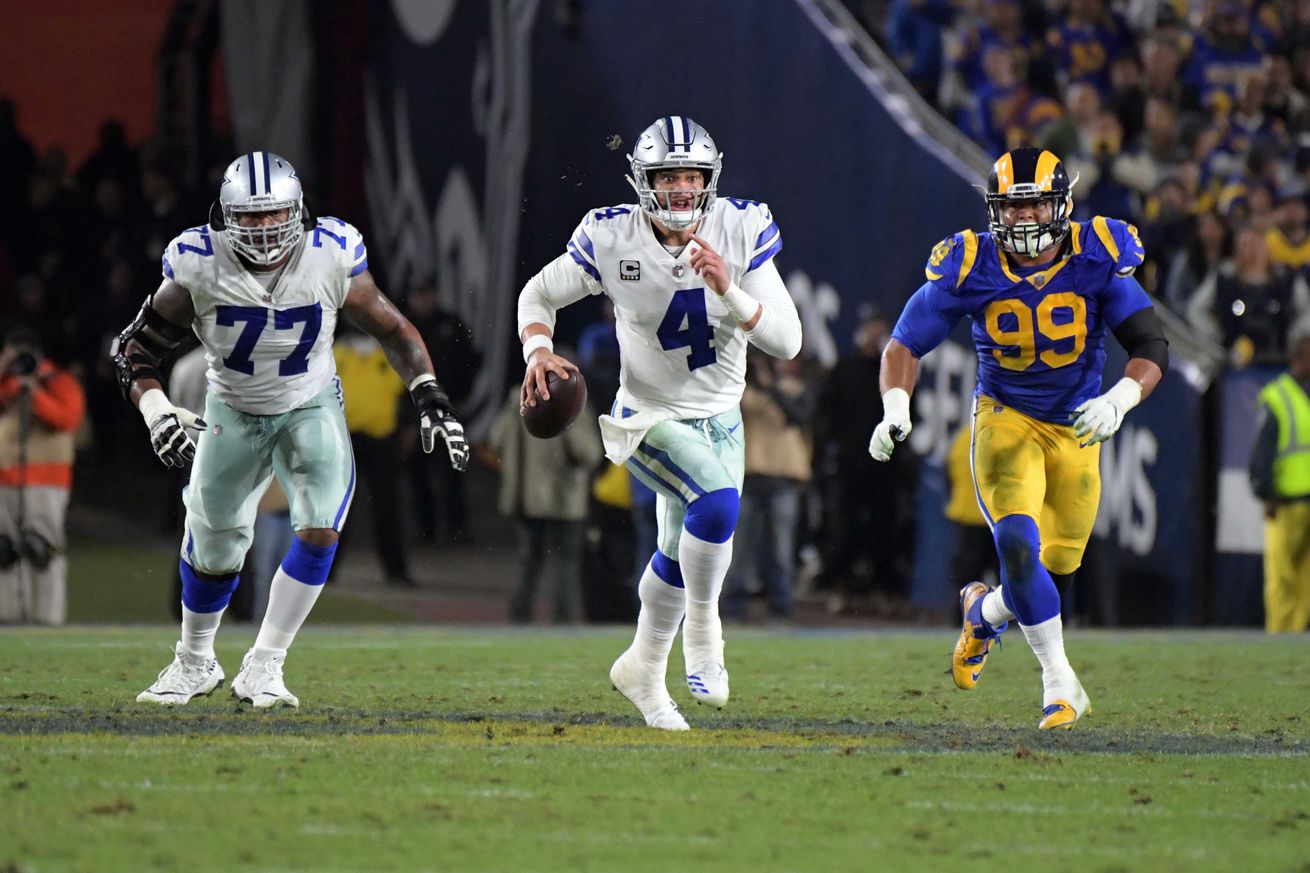 Travis Frederick on pace for a 2019 return.

Oh, so apparently Scott Linehan’s job is safe. At least that was reported early Monday.

The Dallas Cowboys plan to stick with offensive coordinator Scott Linehan in 2019.

Coach Jason Garrett told 105.3 The Fan on Monday that he expects the OC to return for another season.

“We don’t anticipate any significant changes to our staff,” Garrett said, via ESPN’s Todd Archer.

Linehan has long caught the ire of Cowboys fans for his lack of creativity and the team’s red-zone struggles.

A mishmash of inconsistency this season, the Cowboys finished 22nd in total yards and 22nd in scoring in 2018. Dallas ranked 24th in offensive efficiency by Football Outsiders.

But later, word came that no decision had been made. It was a bad day for the Cowboys in terms of delivering a coherent message.

Garrett was peppered with questions about his coaching staff, specifically offensive coordinator Scott Linehan, at the outset of his season-ending press conference. That of course is due to a comment he made Monday morning on a regularly-scheduled radio appearance with 105.3 FM The Fan in Dallas.

“We don’t anticipate any significant changes on our staff,” Garrett said on the show.

That proved to be quite an incendiary comment, which shouldn’t come as a surprise to those who follow the team. The Cowboys’ offense struggled mightily at times in 2018, finishing 22nd in the NFL in both scoring and yards per game. Their red zone struggled were also a season-long mystery, sparking plenty of outcry from fans and media about Linehan’s job security.

In a fitting twist to the story, Garrett wasn’t the only Cowboys official who had a radio appearance on Monday. Team executive vice president Stephen Jones appeared on the same station later on Monday morning, where he said it was far too soon after a playoff loss to be speculating about coaches’ futures.

What Did We Learn From The NFL Divisional Playoffs? – Staff, FiveThirtyEight
The 538 staff had a round-robin discussion and raised some intriguing questions regarding Jason Garrett’s role and whether he’s reached his ceiling.

Salfino: The Cowboys offense is good if it’s working but if it’s not working, Garrett never seems to be able to figure something out on the fly. Garrett is weird in that he’s a CEO coach, but is so closely tied to the offense, which he doesn’t really run.

So what is Garrett’s value, really? Managing the staff? Managing the game? I think when you are a CEO coach you have to have a really strong personality like a Bill Parcells, be that “leader of men.” This is not Garrett, IMO. He just seems easily replaceable.

joshua.hermsmeyer: He is elite at clapping.

Salfino: Lombardi ended his clapping, which is sad.

neil: Yeah, I don’t understand Jerry Jones’s fascination with Garrett. It’s like they were looking for ANY excuse whatsoever to extend him.

gfoster: I just don’t think it’s a desirable job to coach with Jerry breathing down your neck.

Salfino: Remember, Jones doesn’t want a strong personality that will basically kick him out of the locker room and tell him to stay in his owner’s lane.

neil: He’s going to end up being one of the longest tenured coaches ever, and his record will pale in comparison with the others in the conversation. (Except maybe Marvin Lewis.)

joshua.hermsmeyer: For all the grief Jones gets, he does seem incredibly loyal, and that is a terrific boss to have in a league like the NFL that moves on from most coaches far too quickly. Stability does have value.

Salfino: He is basically Marvin Lewis, who also was a CEO coach without a really strong personality/culture. Tell that to Jimmy Johnson

The Cowboys were very clear after the 2017 season they did not believe all offensive woes centered around Ezekiel Elliott’s six-game suspension and a couple missed games for Tyron Smith. If so, there wouldn’t have been the coaching power struggle which ensued and resulted in everything short of appendages being whipped out and measured.

For a few dark nights last January, it felt as if Heath Ledger broke a pool cue in half and told his group of offensive assistants whomever emerged breathing still had a job. Linehan outlasted QB coach Wade Wilson, WR coach Derek Dooley and offensive line coach Frank Pollack, emerging with the organizational power to steer the ship in 2018.

He didn’t exactly steer it into an iceberg, but the orlop deck is far from ashy right now.

The Cowboys got a full season of their best player, yet their scoring dropped from 22.1 points a game to 21.8. That doesn’t seem like much until one adds that league-wide scoring increased from 21.7 points-a-game in 2017 all the way up to 23.3 per game in 2018.

The minuscule 0.3 drop for Dallas took them from No. 14 in scoring (with two-thirds a season from Elliott) to No. 22 with a full year.

Instead of reversing the course — pumping the water out — Linehan gained more control, and things sunk faster.

After missing the entire 2018 center, reports indicate Travis Frederick is progressing to a return for the 2019 season. That’s good news.

If Travis Frederick’s recovery from Guillain-Barre syndrome continues on its current track, the Cowboys anticipate the four-time Pro Bowl center being ready to participate in the start of voluntary offseason program this spring, head coach Jason Garrett said Monday.

“I think it’s very positive,” Garrett said of Frederick’s long-term outlook after he missed the entire 2018 season due to the auto-immune illness that affects the nervous system.

“He’s gotten stronger and stronger. He’s worked very hard in the weight room to get himself back and we do anticipate him, if things continue the way they do, to be involved in our offseason program right from the get-go. Some of the things that were concerning to him have kind of gone away.

Twelve things we learned from Divisional Round games – Staff, NFL.com
The folks over at NFL.com weigh in with their thoughts on the four divisional games played over the weekend.

It is often said in order to deter a bully on the block, punch them in the mouth. In Saturday night’s instance, the bully entering the game was the Cowboys’ physical run defense. Dallas finished the regular season ranked fifth in the league against the run and came off a wild-card win during which the Cowboys held the Seahawks‘ top rushing attack to just 73 yards. The Rams decided to take it right to the Cowboys early and often, and totaled 273 yards rushing and three touchdowns on 48 carries. Todd Gurley rushed for 115 yards and a touchdown, while C.J. Anderson totaled 123 yards and two scores. Gurley and Anderson became the fourth set of teammates to each rush for 100-plus yards over the last 30 postseasons. The Cowboys simply had no answer for the Rams’ punishing ground game, which flipped the tables on Big D by becoming the new bully on the block. Before Saturday night, the previous high the Cowboys allowed came in Week 15 when the Indianapolis Colts produced 178 yards rushing and two touchdowns on 39 carries.

Brooks: “What does Dak Prescott decide to do when they slide that contract offer across the table? If Dak Prescott takes a deal that I would say is like a managerial contract — which may be $20-21 million, not $30 million [a year] — if he does that, the Dallas Cowboys will be good for a long time. … I’m telling you, the way that you win is to have a quarterback on a mid-level deal so you can pay all of the other pieces.

The Dallas Cowboys have that which is why I think Jerry is so in on Dak Prescott. He knows he can get him in on the right value, and he knows he can build the right team around him to continue to compete in the new NFL.

” … Dak Prescott’s already has national ad campaigns. There is a value to being the face of America’s Team. I think Dak Prescott understands that. I think Jerry Jones can take him in the office and tell him, ‘You’re going to make so much money outside of the building that the peanuts that you don’t get from us — because you don’t get a top-of-the-market deal — you’ll more than make up for that.’

Garrett made it clear that there haven’t been many discussions about the roster, especially in the upcoming free agents such as DeMarcus Lawrence, who played this season on the franchise tag.

“But he’s certainly as big a priority as there is,” Garrett said. “He’s been such a great player for us and continues to get better and better. Talk about a guy who takes the right approach to the game and wants to be a great player and wants his unit and our team to be great. He had a fantastic year last year. Again, he was put in that situation with the franchise tag, but he embraced every moment of it. He was involved in everything we did. He’s really embraced the role of being a leader on this football team, beyond just his production.

Some of these Cowboys also carry the scars from the divisional-round losses to the Green Bay Packers in 2014 and 2016.

“I think everyone in that locker room believes we have a team that can win a championship,” said All-Pro right guard Zack Martin, one of eight players who experienced the past three divisional-round losses. “It’s about getting back into it this offseason, working and continuing to grow on this season and hopefully go further next year. I don’t know what else to say.”

The Cowboys are a young team. They did not have a starter older than 30 years old on Saturday. The 2009 Cowboys were also viewed as a young team ready to make a jump after losing in the divisional round of the postseason to the Minnesota Vikings.